In the fifth season the Paramount+ show dares to ask, "What if the law were accessible for everyone?" 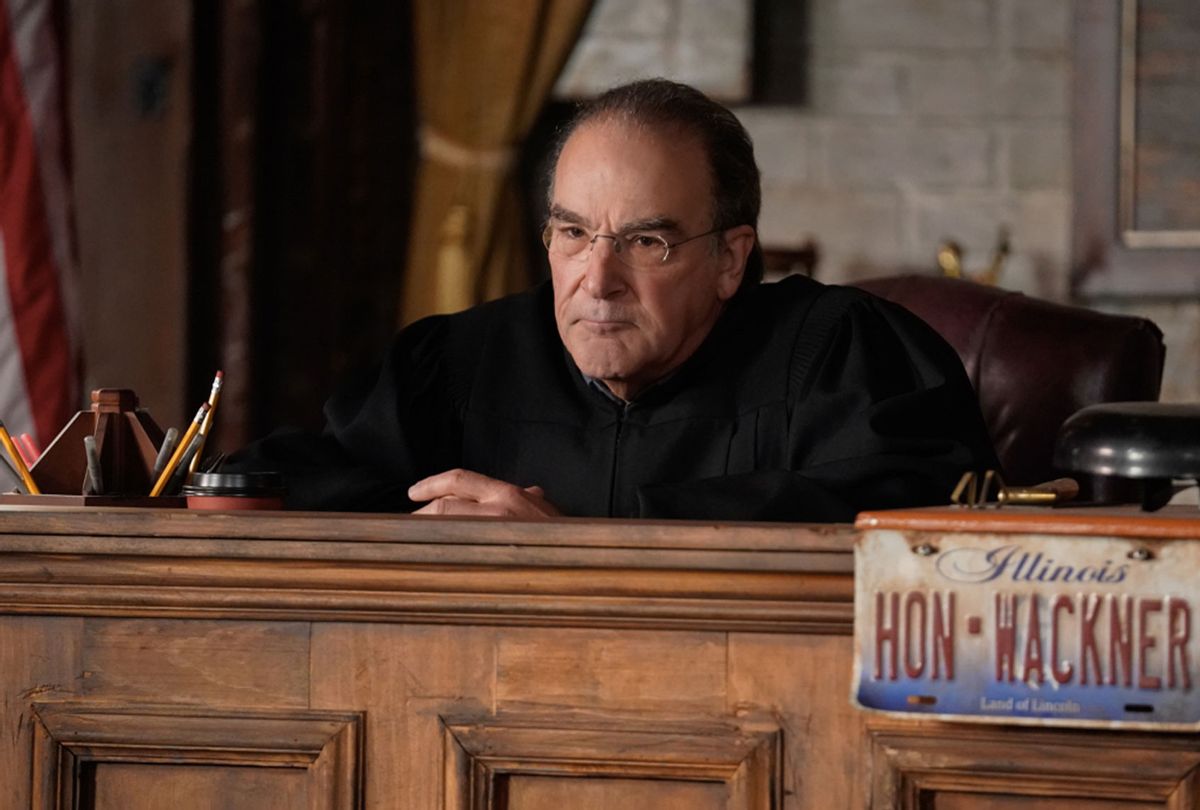 Since its second season, each set of episode titles on "The Good Fight" draws its inspiration from other corners of the known universe. Season 2's titles are named after days in Donald Trump's presidency,  as if the characters are ticking down a prison sentence. Third season titles are inspired by "Friends"; the fourth's are styled after "It's Always Sunny in Philadelphia" episodes.

In contrast, the fifth season purposefully adopts a literary vibe, likely because of its spirit coalesces around a piece of literature prized and recommended Mandy Patinkin's "Judge" Hal Wackner: Franz Kafka's "Before the Law."

Wackner is a new character in this universe, a regular guy with no formal legal training who presides over a makeshift courtroom dubbed "the 9 ¾ Judicial Circuit." It is as unofficial as a court gets, situated behind a copy shop and devoted to theatric binding arbitration hearings.

Chicagoans who know about this pop-up version of the People's Court seek justice there because Wackner strives to be fair, actually fair, as opposed to ruling based on legal loopholes and precedent.

Reddick, Lockhart, and Associates partners Diane Lockhart (Christine Baranski)  and Liz Reddick (Audra McDonald) would never have heard of Wackner's experiment if not for one of the firm's lawyers being mysteriously summoned, only to discover that other attorneys are actually playing along. It's easy to see why. Wackner is entertaining, a kind of Boomer poet who makes his plaintiffs and defendants shake hands after the resolution of each case and tell the other person, "I respect and love you."

But the lawyers who play along also supports his heartfelt if absurdist interpretation of how the justice system should work as opposed to how it actually does. "A real lawyer will look for reasons why not," Wackner says at one point. "I need someone to look for reasons why."

Hence his advice to a doubting would-be counselor is to seek answers and inspiration in Kafka's puzzling parable, a short work that opens like so:

Before the law sits a gatekeeper. To this gatekeeper comes a man from the country who asks to gain entry into the law. But the gatekeeper says that he cannot grant him entry at the moment. The man thinks about it and then asks if he will be allowed to come in later on. "It is possible," says the gatekeeper, "but not now."

The TL;DR summary of the rest is that the man peeks through the gate to see what's on the other side, only to be thwarted by the gatekeeper, who warns the man that he's powerful. So the man waits until his life is spent, bribing the gatekeeper with everything he has along the way. With his final breath he asks why, if everyone seeks justice under the law, has no one tried to pass through the gate except for him. The gatekeeper replies that the entry was assigned only to the man and tells him he's going to close it.

Only Kafka knew the true meaning of "Before the Law," but the most common interpretation is that legal systems are designed to be impenetrable, to the point that most people would rather accept injustice as a byproduct of an unfair society or bypass it entirely. One of the saddest lines in the work hangs upon a simple, sane notion: "The man from the country has not expected such difficulties: the law should always be accessible for everyone, he thinks . . ."

Every season of "The Good Fight" sends Diane and Liz through a crucible that closely relates to whatever is happening in reality. Season 5 places them at odds due to personal and professional struggles impacting their firm's ecosystem – a workplace enduring the same racial reckoning seizing the rest of the nation.

Neither Judge Wackner nor the 9 ¾ Judicial Circuit appear at all in this week's episode, this season's fifth, but its precepts echo through the main storyline concerning unequal healthcare apportioning during the height of pandemic.

Within those hallucinations are real memories of being left to die on a gurney with other patients in what is essentially a holding pen. An overhead shot shows the common denominator among those as ill as Jay: every person is either Black or brown, and all are gasping for breath as masked, hazmat suited men and women check on them occasionally without administering much help.

A case involving a Latinx woman who died of COVID-related illness triggers Jay's memories as he assists in the deposition. Other developments along the way remind him of his unequal status even among his Black co-workers. In other words, this subplot isn't an illustration of the law failing but justice itself falling down.

Other partners starting to rebel against the fact that Diane, a white woman, is one of the two remaining name partners of an African American firm that built its legacy on fighting for civil rights. During Trump's presidency having Diane aboard served as a somewhat insulating effect, despite her being targeted by his cronies.

Diane's whiteness is part of the problem, amplified by her husband Kurt McVeigh's alleged involvement in the Jan. 6 insurrection and the careless financial calculus driving their multinational owners STR Laurie. Series creators Robert and Michelle King don't shy away from the bitter irony of a white woman heading a Black firm; in fact, upcoming episodes place the ordinarily empathetic Diane on a self-serving, divisive course of action.

"The Good Fight" plays personal arcs in concert with themes bedeviling the larger world, one in which the Kings' fictional firm and in its people exist. Liz and Diane (and, when they were still with the firm, Lucca and Adrian) sell themselves as champions of progressive values, but plenty of their wealthiest clients exploit people like Kafka's man from the country.

New associate Carmen Moyo (Charmaine Bingwa) does such a bang-up job in representing a crime lord that he gets his sentence overturned. Even Wackner has a questionable backer in David Cord (Stephen Lang) a fictional version of one of the Koch brothers. Cord talks good game, and hires Liz and Diane's firm along the way, but he has a long history of pumping money into destructive political causes. Still, he sees Wackner's court as a start-up opportunity.

Reddick, Lockhart, and Associates accept such business for the same reasons that other top law firms do: to maintain a certain level of cred in the legal community, and for the money, which is the main reason for Diane's name partner status.

Wackner's courtroom is therefore more of a spiritual remedy than a legal one, one part of a larger season arc casting an eye on what justice and injustice look like in the world beyond courtrooms.

Current episodes of "The Good Fight" premiered before the Supreme Court handed down rulings that gutted the Voting Rights Act and weakened unions, each mere previews of how they'll land in upcoming cases involving abortion rights and LGBTQIA+ protections.

As millions of us reel from the implications this sharply conservative court will have on the United States legal system for generations, this new season offers a type of intellectual escapism – specifically, through Wackner's part of the story.  The 9 ¾ silliness lightens the overall mood, what with Wackner's insistence that plaintiffs and defendants wear head to toe costumes to prevent unconscious bias from influencing his decisions. But that's also in line with "The Good Fight" dedication to providing catharsis to its politically exhausted viewers.

This new season's episode titles, by the way, link together as a larger fable. "Once There Was a Court . . .," "And the Court Had a Clerk . . ,." "And the Clerk Had a Firm . . ." "And the Firm Had Two Partners . . ." Writers recognize this as a story spine, a means of organizing concepts into a workable narrative, or simply breaking through creative blocks.

Kafka employs a version of that structure in "Before the Law" while obscuring any single obvious moral. Maybe that was his way of acknowledging that sanctioned justice systems never work neatly.

Seizing onto Wackner's takeaway is more optimistic. The law should always be accessible for everyone, and true justice along with it. Most of "The Good Fight" demonstrates the ways these elude us, despite Diane and Liz's noblest efforts. Can you blame them for daring to believe in Wackner's fantasy of how an ethical and righteous world should behave?

New episodes of "The Good Fight" debut Thursdays on Paramount +.