"Friends: The Reunion" is The One We Could've Lived Without 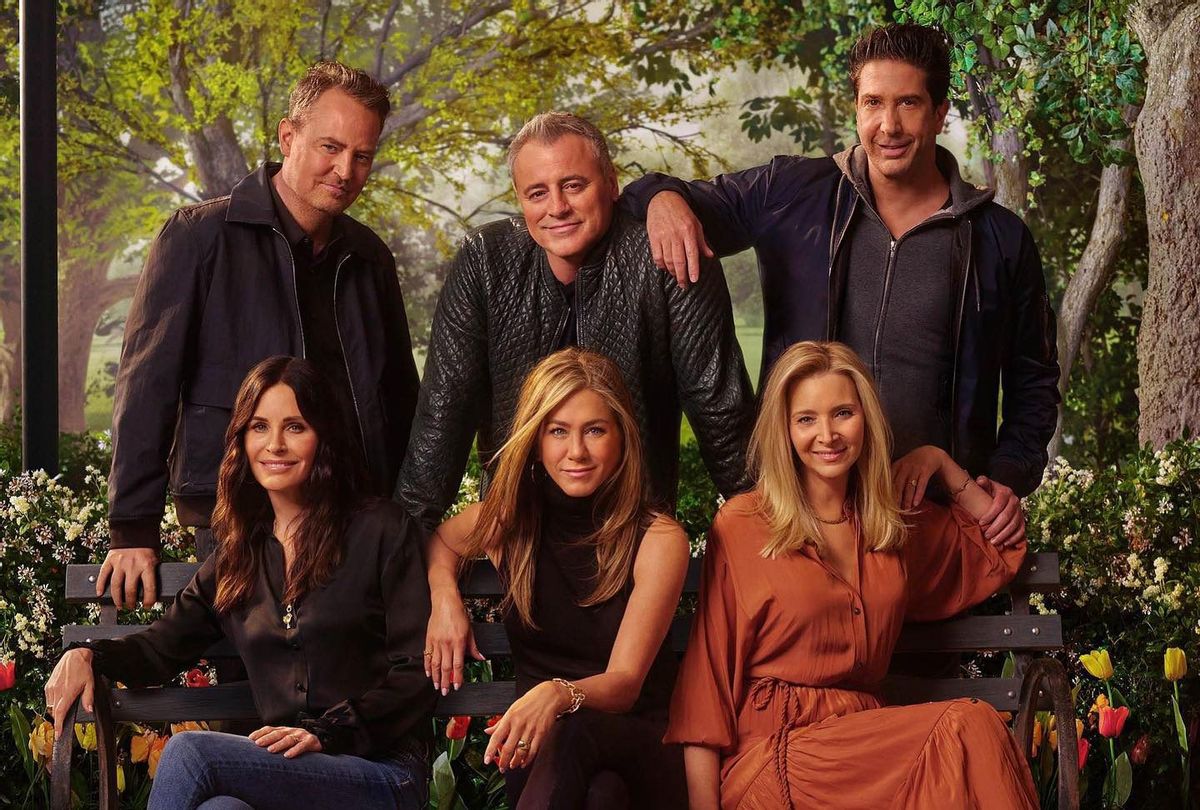 Watching "Friends: The Reunion" is impossible to do without contemplating its valuation. By that I am of course referring to the money various platforms paid to have the sitcom beloved by Millennials, starting with the $100 million Netflix spent to keep it for an additional year for its 25th anniversary, then WarnerMedia's forking over of $425 million to reclaim the rights, a purchase good for five years.

Exceeding this in importance, and relevant to how you're bound to feel about this long-awaited reunion, is the value "Friends" has to you. How much of your time are you willing to expend to watch Jennifer Aniston, Courteney Cox, Lisa Kudrow, Matt LeBlanc, Matthew Perry, and David Schwimmer gather again on the Warner Bros. Studio lot, live and in person? An hour? Would you believe . . . one hour and 44 minutes?

For the most passionate "Friends" worshipper no amount of time witnessing James Corden lobbing softballs at television's most famous sextet is enough. But to those of us who like it well enough that amount of runtime can't be sustained without a lot of filler and a rehashing of the stories you've probably heard before.

Regarding "Friends," however, HBO Max is wagering that piles of remembering when, hugs and tears are all the satisfaction that's required to saturate the market. "Friends" which debuted in 1994 and ran until 2004, still sets the template for how to be an adult for Millennials and Gen Z even though members of those cohorts understand the many ways that the show is constructed from fantasy.

Ross, Rachel, Chandler, Joey, Phoebe and Monica are still potent aspirational archetypes, not despite their stumbles and flaws but because of them. For this reason the parts of the "Friends" reunion that work well are the segments in which executive producers and creators Kevin Bright, Marta Kauffman, and David Crane explain how the magical sausage that is the show is made.

Origin stories explaining how each character came to be and how everyone got their roles are as charming as the blooper reels and the out-of-school tales about what was going on behind the scenes. Rather, only the good, PG-rated stories. We can and should try not to compare the varying impact time has had on each of actor and their respective careers, a task activating sight and memory.

The close calls as to who might have been Chandler or other characters never pop up, and no time is spent on the impact tabloid coverage of Perry's struggles with addiction may have had on morale, be it bolstering or detrimental. (Some reporting in the lead-up to the reunion questioned Perry's slurred speech in some scenes, which his representatives explained as the unfortunate side effect of oral surgery that occurred right before the shoot.)

Fact is, we know most of these "Friends" factoids and others because the show and its cast continue to be a significant presence in culture. Every member of its cast is working, some more than others, and any updates on their personal lives are the briefest of Google searches away. The show's 25th anniversary wasn't even two years ago, and the barrage of coverage surrounding that contains almost every bit of trivia you could possibly guess at or desire.

This is why so little about the special feels significant or necessary for anybody save for the show's diehards.

Those folks will be thrilled to realize they share their "Friends" adoration with the likes of "Game of Thrones" alum Kit Harington, David Beckham, Mindy Kaling (of course) and Malala Yousafzai. It's additionally humorous that Malala sees herself not as a Monica, a Phoebe or a Rachel but . . . a Joey. Who would have guessed?

A montage featuring interviews with "Friends" fans from around the world demonstrates how globally appealing this formula was in its heyday and still is. And it is honestly touching to hear people from places such as Ghana, Mexico, France, India and Germany, explain how personally meaningful and healing the show has been for them.

The humanizing approach of "Friends: The Reunion" is its greatest strength. But a lot of the showbiz stories get in the way. Hearing background history we may not have previously known about who these actors were before the show is nice, but we're well aware of its impact on the zeitgeist, from the Top 40 hit status of its theme by The Rembrandts to the popularity of Rachel's layered haircut.

Having said that, seeing a clip from "LAX 2194," a comedy about luggage handlers in space that Perry had already signed on to before "Friends" came along, buys back some of my patience. That and a scene from the other middling comedy that similarly locked up Aniston, are absurd reminders of how much stupidity floats in this industry's stream beside once-in-a-generation shows like this one.

Even they aren't as entertaining as the unexpected blips of spontaneity within this thoroughly staged live production, such as when Kudrow howls in reaction to Schwimmer pointing out a bug in her hair or when LeBlanc giggles at various jokes he pulled during production.

You have to power through a whole lot of standard reunion rickrack – the present-day table reads of memorable scenes, the clapter-ginning cameos from the likes of Tom Selleck, Thomas Lennon and Cara Delevingne – to get to these interesting flashes, along with a couple of pieces of truly gasp-inducing, previously unrevealed dish.

Well, one bit of dish and some cameos reviewers have been asked not to mention. Given the dearth of actual surprises here it would be a cruel disservice to spoil them.

Instead let's talk about what isn't answered, starting with the question generated by the nostalgic fun fact listed on the opening title card. "Since the finale, the six cast members have been in a room only once. Until today . . ."

Considering how much energy and focus is expended on selling the genuine lasting friendship the cast has shared all these years one would think Corden's natural first question would be, "Why is that?"

This is never definitively asked nor answered. Maybe the special's producers assume everyone watching recalls that everybody but Perry reunited for a James Burrows tribute in 2016. (Perry was committed to a stage production in London at the time.) Maybe they gambled we'd be more moved by knowing they still enjoy each other's company now.

But obviously if Corden can't bring himself to float that question, nobody's fielding any queries about how the show's completely white version of 1990s New York City strikes them in 2021. To that end the stroll down Memory Lane passing through the guest star cul de sac includes archival clips of Paul Rudd, Ben Stiller and even a mildly uncomfortable Brad Pitt citation . . . but nary a mention of Aisha Tyler, who appeared in nine episodes as Charlie Wheeler and is quite a big star these days.

And why would Corden take that risk, when an audience member's question of, "Was there anything you didn't like?" is all it takes for him to quip, "Way to keep it positive"? (Schwimmer's totally uncontroversial answer will not surprise you! Hint: in involves a creature with disgusting habits.) The "Friends: Reunion" isn't in the business of looking back through time with brash clarity or sobering perspective. If you want that, cue up the reunion for "The Fresh Prince of Bel-Air," where Will Smith reconciles with Janet Hubert, the original Aunt Viv, whose recasting went down more cruelly than we previously expected.

So without much in the way of steamy goss or sober truth bombs, what is left that makes "Friends: The Reunion" must-see TV? Not much, unless all you want is to watch six wealthy besties wistfully reminisce about the good times they shared with billions of people around the world, through the 236 episodes of TV they made together. If that's enough for you, terrific. The rest of us are welcome to go about our lives or bask in the shadow of the Friendly Finger.

"Friends: The Reunion" is currently streaming on HBO Max.