Let's consider what this underappreciated, creepy and wickedly funny show says about our bad selves 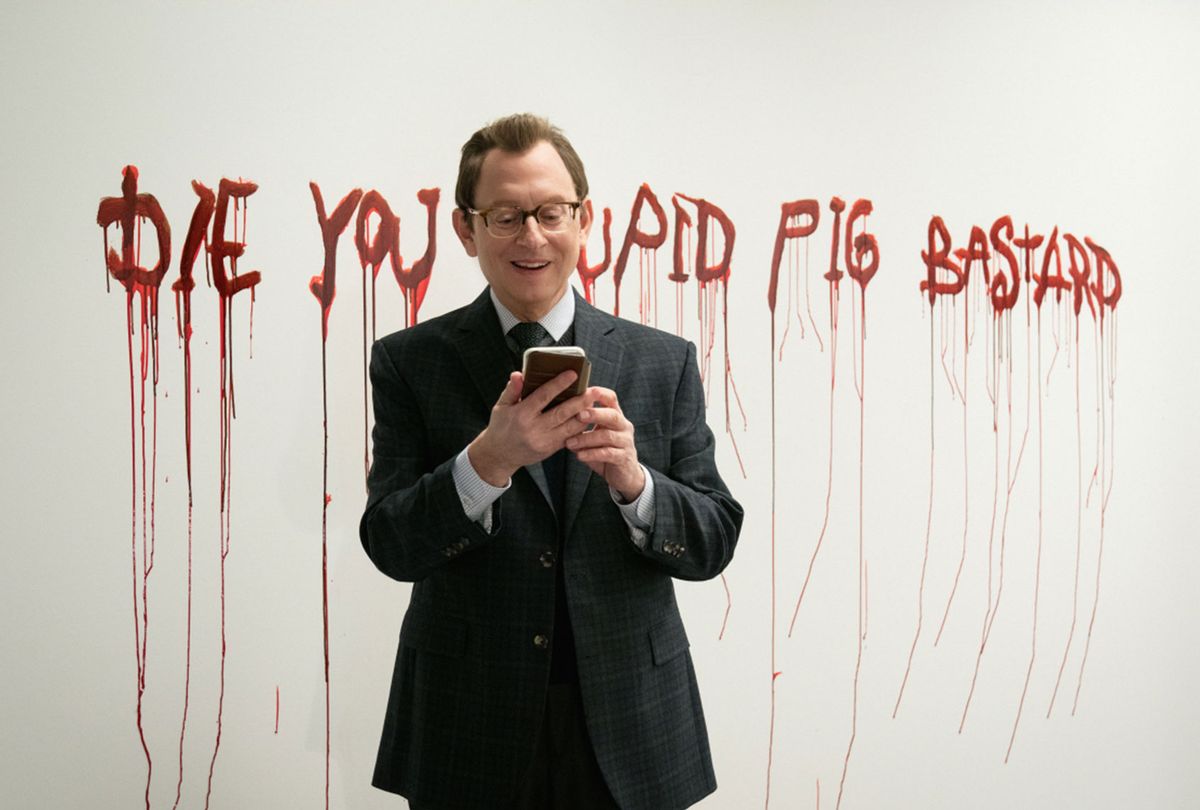 In a recent episode of the thrilling yet wickedly witty series "Evil," the tormented, determined Dr. Kristen Bouchard (Katja Herbers) enjoys a moment of peace with one of her four daughters, with whom she snuggles in her bed. Kristen consoles the girl through a possible encounter with that week's night terror, zombies, when she asks something millions of kids have posed to their parents.

"Evil" revolves around such simple questions, which is one of the reasons the show earned loyalists during its first season run on CBS and second life on Netflix. Tagging along with Kristen as she assists the Catholic Church with determining whether afflicted people are possessed or merely ill makes answering that question tougher now than it might have been for previous generations.

The show and its creators, Robert and Michelle King, provide many reasons as to why that is. Some are evidentiary, others theoretical.  Mainly what it comes down is that we live in a world that's a lot darker than the one that existed before the dawning of the Internet and social media, which was the overarching position of the first season.

But we're knee-deep into the second season on Paramount+ now, and Kristen has seen some things. Moreover her colleague David Acosta (Mike Colter), a priest-in-training has shown her a few things. Their other team member, hardcore skeptic tech specialist Ben Shakir (Aasif Mandvi) can usually find mundane reasons for various bumps in the night, but even he has experienced enough close calls to move him to prayer.

She also has a night visitor, a demon called George. Another psychologist, Dr. Leland Townsend (Michael Emerson) might be hell spawn, too. He harrows Kristen, David and Ben for no stated reason other than to twist them into knots, and he succeeds in driving Kristen up the wall by romancing her mother Sheryl (Christine Lahti).

Kristen has also witnessed a pregnant woman plead for help while claiming to be devoured by a possessed fetus and saved one co-worker from being murdered by a racist "Angel of Mercy"-style nurse and another from being dragged into Hell by a homicidal elevator.

Another sinister occurrence strikes closer to home: a serial killer who claims to be possessed by a demon named Roy is convicted of his crimes only to be released, leaving him free to kill her daughters. Maybe she's done something about that. It sure seems like she has.

All of this informs how she answers her sweet child. "Well, there are people who do monstrous things, I guess," she says. "But I don't know if I'd call them monsters because they're still people underneath."

"You just have to find that person?" the girl asks, and Kristen replies. "Yup. Sometimes that's hard because they've forgotten who they really are, or they like being a monster too much."

Television viewers have a long history of enjoying visions of Heaven through its representatives, mainly angels. "Highway to Heaven," "Touched by an Angel" and its spinoff "Promised Land,"  "Joan of Arcadia" and "God Friended Me" are part of a sizable list of shows depicting soothing tales of divine guidance.

Most of these shows aired on CBS, and with the exception of "God Friended Me," the majority of them hail from eras before social media and scores of TV channels fractured our attention into segments.

Considering all that, Heaven's had a pretty good run in primetime. Hell is another story. "Supernatural" may have gleaned a decade and a half's worth of mileage out of a war between angels and demons, neither which is necessarily better for humanity than the other. But beyond the Winchesters and the odd comic book adaptation like "Lucifer," the Devil's had a tough time attracting and maintaining our attention.

This is doubly true for shows about demonic possession and exorcisms, the meat and potatoes of "Evil." Fox tried to expand "The Exorcist" into a weekly series without much success. Its problem, I think, had to do with a lack of belief. People simply don't scare as easily anymore.

"Evil," however, is not expressly about believing in anything. Rather, explaining is its currency – explaining, but not necessarily providing solid answers. Not yet. The writers spin the show's fabric out of uncertainty. Creeping us out is a bonus; the writers much prefer to be wicked, which is much funnier.

Emerson jumps into that pool with two feet and splashes around like a sugar-shocked toddler, which reminds us that one of the reasons evil is so seductive is that it's so darn amusing.

What's interesting, though, is that for all of its manifestations of demons like George or the occasional appearances by a horned beast that resembles the Sabbatic Goat Baphomet, the scariest monsters are human. Whether it manifests as racism, bullying, or subliminal conditioning to self-harm, "Evil" shows us how ordinary and banal most diabolism is. Given the dangerous state of our country, that's truly frightening.

Season 1 hooks into that dread. It debuted as the presidential election was heating up in 2019, hinging upon the simple idea that the world is getting worse because terrible people are connecting via social media. David says this in the pilot; by the season finale a broader web of connection is revealed, alluding that actual dark forces may be behind a wider plan.

Back then the writers probably hadn't accounted for QAnon's widespread reach, to say nothing of the pandemic or a white supremacist attack on the U.S. Capitol building. That's probably why this new season feels more ominous than the first, because its plots ask us to turn inward, acknowledging that evil can't flourish unless good people allow it to do so.

The Kings are also the creative force behind "The Good Fight," a legal drama in which the protagonists frequently operate in ethically gray areas because that's where the money hangs out. Without cash flow, the firm can't hire top notch lawyers to go to bat for worthwhile causes. Championing the righteous means dirtying your hands from time to time.

Meanwhile "Evil" cautions against remaining in morally murky places for too long, because that's where devils prey on people. This season's storyline explores the corrupting nature of malice, as Leland figures out that the best way to defeat David, Kristen and Ben isn't to attack them from the outside with gun-crazy incels, bigots or homicidal maniacs clothed in good suits and religious sanctimony.

Getting under their skin is so much more effective. Leland approaches David's superiors with a generous donation, demanding an exorcism in return. The team insists he doesn't need one, that he's faking everything. A mountain of cash in the church's figurative collection plate says differently. Thus he takes every opportunity to needle at them, and many of his jabs are too accurate to ignore.

But his torture is an extension of everything already percolating in the world around the team, and us. The Kings have hinted to the press that most of what we see in the show is inspired by current events. Of course, we're not to take some things literally, like the possibility that zombies exist. However, America's obsession with zombies is quite real and a natural inspiration for a storyline that wonders where that comes from.

One plausible explanation is that zombies physicalize our fear of mortality and decay. They're something we can see and therefore stand a chance of defeating. Then again, all you have to do is watch a few prepper shows to recognize that some who claim to fear such monsters aren't concerned about the undead. They're afraid of certain kinds of living, breathing people.

And it all leads us to question not only what we know, but what comforts us. Does prayer work? Is violence ever justifiable? Despite what Kristen encourages her daughter to do, her actions don't square with her assertion about trying to find the person underneath the monster. Whatever she did, she believes she had to do. The chilling part is that it doesn't appear to have affected her mental state.

In the same way that partisan politics and conspiracy theory quackery has made millions of people entirely unreasonable and likely unreachable, this show has no problem stating that there are folks in the world who do bad things and encourage others to do bad things for the sheer pleasure of it.

David states this in the show's pilot, explaining that these people pretend to be normal, "but their real pursuit is evil. Encouraging others to do evil. You don't have to believe in the supernatural to know that."  Strangely enough, this is a relief. It means we're not insane, but the world probably is. It means there might be demons, but whether they exist doesn't matter. Evil is real. "Evil" makes dealing with it entertaining.

All episodes of "Evil" Season 1 and the first six episodes of Season 2 are available to stream on Paramount+. Following a hiatus, new episodes will resume on Sunday, Aug. 29.