Donald Trump rallies the troops in Phoenix: Unfortunately, that's not a metaphor

A former Republican calls this "the most dangerous moment in this nation's history." We can't afford to look away 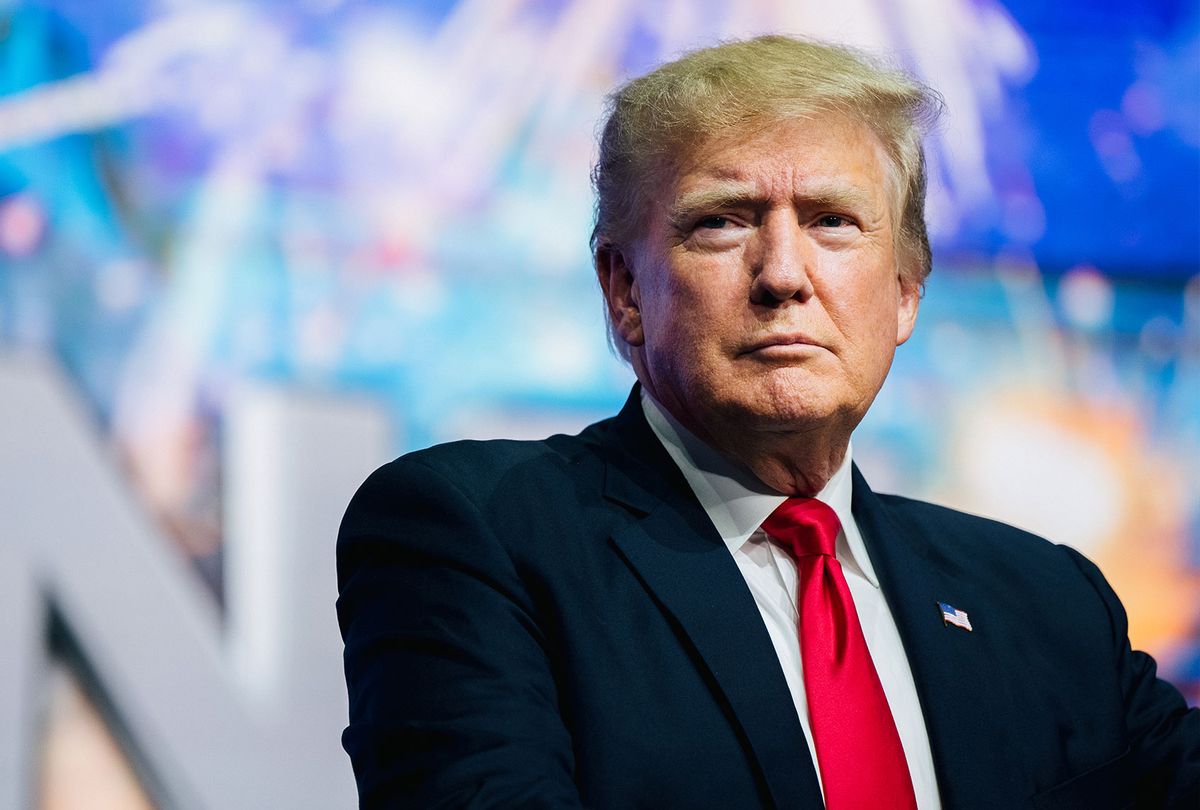 Thousands of members of the Trump cult waited outside for hours in the summer heat of Phoenix on Saturday, before gaining entrance to a Turning Point USA event where their personal god and savior appeared as part of his 2021 revenge tour. It was a political rally, a gospel revival, a rock concert, a carnival and a family reunion all in one.

As a show of loyalty to the Trump death cult, most of the attendees refused to wear masks to protect themselves and others from the coronavirus pandemic and its new, even more contagious delta variant. The Trumpists even went so far as to heckle the news media with chants of "No masks!"

These are the people described in a recent Washington Post essay by Michael Bender, who has spent considerable time among Trump's most diehard followers:

They were mostly older White men and women who lived paycheck to paycheck with plenty of time on their hands — retired or close to it, estranged from their families or otherwise without children — and Trump had, in a surprising way, made their lives richer. ...

In Trump, they'd found someone whose endless thirst for a fight encouraged them to speak up for themselves, not just in politics but also in relationships and at work. His rallies turned arenas into modern-day tent revivals, where the preacher and the parishioners engaged in an adrenaline-fueled psychic cleansing brought on by chanting and cheering with 15,000 other like-minded loyalists.

Trump and his neofascist movement inspires such extreme loyalty that his followers are willing to kill or die for him. No one feels that way about Joe Biden and the Democrats.

During his speech in Phoenix, Trump played his familiar roles: bully, mob boss, preacher, public menace, demagogue in waiting and former president who expects to be returned to power by any means necessary. As Gen. Mark Milley, chairman of the Joint Chiefs of Staff, reportedly warned in the weeks after Trump's defeat last November, Trump has channeled the energy and grandiose false claims that propelled Adolf Hitler to power in Germany.

On Saturday night, Donald Trump captivated his audience with a truly Orwellian performance. The event was officially titled, "Rally to Protect Our Elections." But of course the 2020 presidential election only required "protection" from Trump and his allies — protection against voter suppression, widespread lies and subterfuge, an attempted coup, and other efforts to undermine democracy and subvert the people's will.

He even added a new wrinkle to the Big Lie narrative, claiming that votes were supposedly rigged, stolen and otherwise manipulated in Biden's favor — and the truth is to be found in "the routers." Adding new details to a conspiracy theory is an effective way of keeping one's audience engaged, ensuring that the conspiratorial mind finds new clues to follow and new mysteries to be solved.

Trump ramped up his use of stochastic terrorism:

In all, Trump's Phoenix rally was a celebration of lies, white victimology, paranoia and threatened acts of "patriotic" revenge and political violence. Such threats or possibilities are a key attribute of fascism, which proposes scorched-earth tactics to destroy the old social order and create a new one in the image of the leader and the followers.

How did the public respond to Trump's Phoenix rally? The same public voices who have been sounding the red alert continued to do so. In most important ways, the events of Jan. 6 were just a trial run or harbinger for worse political violence in months and years ahead.

It seems conceivable that the 2022 midterms may be the last "free and fair" national elections in the United States — and given the Jim Crow Republicans' accelerating war on multiracial democracy, that prediction is generous.

Too many voices in the media continue to downplay the dangers to democracy represented by Donald Trump, his movement and the Republican Party. When voices in the mainstream media do speak out, they often lack credibility because they were so late to face the truth about the Trump movement. They may express alarm now, but it's not clear that has much if any impact on public consciousness.

The house has been on fire for several years and now the professional smart people and others with a prominent public platform are finally screaming for help. It is far too late for such belated sounds of alarm to have a real impact on the public's consciousness.

Liberal schadenfreude was in full bloom on social media, which saw a torrent of mockery directed at Trump and his followers, often describing them as ignorant rubes or losers. But laughter will not save America from Trumpism.

In a recent conversation with Salon, physician and psychoanalyst Dr. Justin Frank, author of "Trump on the Couch," described this kind of laughter in the face of Trumpism as "unhealthy humor" and "defensive in nature."

It's defending against anxiety and fear. Specifically, it is a defensive use of contempt. Through it, people can demean and insult Donald Trump, which in turn means they don't have to be afraid of him. One of the ways a person can express contempt is through laughter. Thus it is a denial of one's vulnerability, because contempt means the other person is harmless, therefore he or she cannot hurt you. In that way, Trump is made into a pathetic fool. "If I laugh, it's not going to hurt me."

Ultimately, defensive contempt is a way of dismissing Trump's dangerousness. However, that type of contempt toward Trump is really an attack on reality. It is also an attack on one's own perception because you have actually undermined your own ability to understand just how dangerous Donald Trump is.

Six years into the Age of Trump, the American people cannot claim ignorance of Trump and his movement as a type of defense. They have been warned repeatedly. They have witnessed the consequences. On Twitter, former Republican strategist Steve Schmidt offered these observations after Trump's Phoenix rally:

Ignoring Trump is not an option. Looking away is not an option. Trump is the 2024 presumptive nominee of the GOP. His insanity, conspiracy theories, rage, grievance and lying are dangerous. His words tonight teemed with menace and intimations of violence. Yet, he remains unchallenged except @Liz_Cheney and @RepKinzinger will defy him. He is in complete and total command of the Republican Party and he is waging war on the idea of American democracy. We are at the most dangerous moment in this nations history since the Civil War. Trump is unstable, unfit and addled yet he could be the 47th President. If that happens, we lose the country. We lose our democracy.

Famed Watergate journalist Carl Bernstein told CNN's "Reliable Sources" on Sunday that Trump exhibits "a kind of delusional madness — such as Gen. Milley was talking about — that's on a scale and a scope that we have never experienced in an American president in our history. I think we need to calmly step back and maybe look at Trump in a different context. He is our own American war criminal, of a kind we've never experienced before."

All Donald Trump has to do to command more political violence is to tell his followers the place, date and time. The rest of the American people would be shocked. The mainstream news media would tell readers and viewers that this was "unprecedented" and that no one could have imagined such a thing in America. Democratic leadership would bray on about "bipartisanship," "democratic institutions," "norms" and "rules." Such reactions are a choice, born of willful ignorance and learned helplessness — a choice that may well doom American democracy.