With Elliot Page, increased visibility of transmasculine identity can be “both great & awful”

The actor's popularity helps spotlight underrepresented issues, but his celebrity can also be a shortcoming 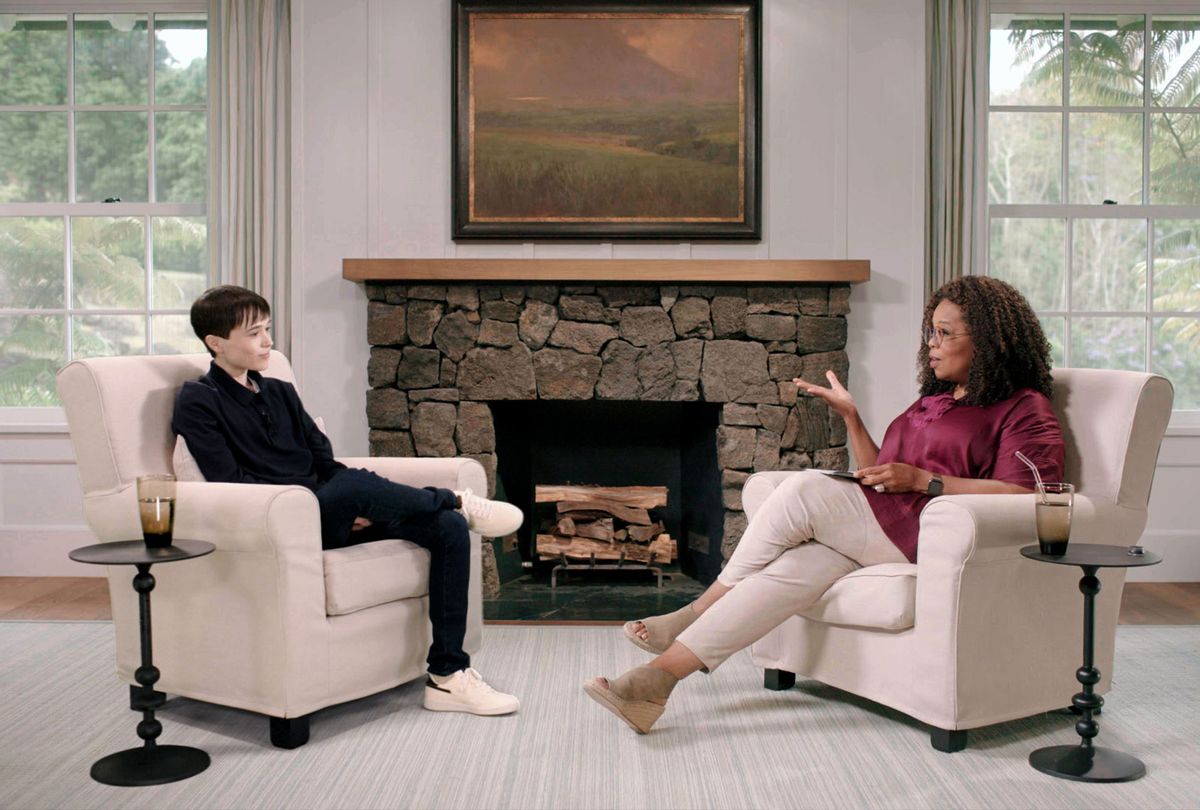 With Netflix's superhero series "Umbrella Academy" slated to end filming its third season by August, many fans are curious awaiting what the show has in store for Elliot Page's character Vanya Hargreeves, one of the most powerful supernatural beings at the Academy.  In December 2020, Page came forward as a transmasculine non-binary individual using masculine pronouns, and his honesty, authenticity, and advocacy for LGBTQ communities have since made him a celebrity face for trans communities in the media.

Consider Page's March TIME magazine cover, or his release of fun photos in swim trunks, to wide celebration and joy in queer and trans communities. As a guest on Apple TV+ series "The Oprah Conversation" and Oprah Winfrey and Prince Harry's series on mental health, "The Me You Can't See," Page described his conflicting feelings about his transition, which he saw as both "the most miraculous, amazing thing," while also being frustrated that "society [had] made getting to this place in my life" so difficult.

Despite the challenges Page faces, the visibility he brings as a transmasculine individual is especially refreshing. With the popularity of "Pose," "Transparent" and even Caitlyn Jenner, pop culture is more familiar with transfeminine identities than transmasculine ones. Even Chaz Bono doesn't have the familiarity with younger audiences that Page has.

However, even with the increased media representation and discourse around transgender health and identity, erasure of transmasculine people and other problematic portrayals of transmasculine identity have persisted. As Slate's Evan Urquhart has pointed out, transmasculine folks often face infantilization, stemming from people holding onto feminized perceptions of them. Additionally, their experiences with pregnancy, seeking reproductive health care, or not being able to medically transition and seek gender-affirming care are often used to invalidate and erase them.

The visibility brought on by celebrity stories and media representation can help with the unique loneliness and isolation of being a transmasculine person, especially in rural areas where gender-affirming care may be less available, or there may be greater stigma around transgender identity, Kara Mailman told Salon.

But, of course, this level of visibility can have its drawbacks, and can be "both great and awful," says Mailman, a transmasculine non-binary person, and senior research analyst at the reproductive justice organization Reproaction

"What tends to happen with these moments is allies will show up in the moment to express their support, and opposition will also come and start with new anti-trans legislation, like the surge in anti trans bathroom bills, locker room bills and sports bills," they explained. "A lot of the time, once the moment kind of dies down and isn't as new, you'll see a lot of people who have been very vocal about their support kind of drop off, and we're on our own."

Page's story means a lot to Mailman on a personal level, as "there's not a lot of openly non-binary transmasculine people in media," and Page "consistently shows up for other trans people." But they're also concerned with too much representation of transmasculine folks as "very thin, able-bodied and white."

"That leaves a lot of transmasculine people without representation and without community support, community understanding," Mailman said. "Trying to access gender-affirming health care as a transmasculine person who doesn't fit that archetype of thin-ness, whiteness, able-bodied, is drastically different and drastically more difficult."

Oliver Hall, the trans health director at Kentucky Health Justice Network (KHJN), told Salon that while they celebrate Page and are "happy for them, and them getting to step into themselves," Hall has never really "connected with trans celebrities."

"That feels like a completely different experience of trans-ness than what most of us experience," Hall said.

KHJN, a Kentucky-based and community-sourced gender and reproductive health fund, is one of the first abortion funds across the country to also fund callers' access to gender-affirming trans health care. Hall has directed this program since 2016.

"Being trans is expensive: legal name changes, binders, gaffs, packers, as well as HRT [hormone therapy] and gender affirming surgeries, for those that medically transition, are prohibitively expensive," Hall said. These costs and barriers can vastly separate the experiences of wealthy or onscreen trans folks, from those of poor or ordinary trans folks. And as transmasculine identities and experiences begin to gain more visibility, Hall says we can look to the experiences of trans women and femmes, which have generally been more represented in media, to see "that visibility doesn't always come with improved rights or access."

The power of storytelling

"I don't think I've watched as many trans movies or shows as maybe I should have," Mailman concedes. But they have only positive words for Netflix's now-canceled "Sense8," a science fiction series that saw eight supernatural beings around the world connected by their senses. Among these eight dynamic protagonists is a trans woman, Nomi Marks, played by Jamie Clayton. The show received wide praise for its portrayal of Nomi as a trans person "being allowed to simply exist," as NBC put it.

Other recent shows that have garnered critical acclaim for thoughtful portrayal of trans identity include Amazon Prime's "Transparent," following the life of a divorced parent who reveals to her kids that she's always identified as a woman, despite once being their father, and the FX drama "Pose," starring Emmy-nominated Mj Rodriguez, a Black trans woman.

As for representation of transmasculine characters and actors, Hall says they enjoy Theo Germaine, a transmasculine non-binary person, as James Sullivan on "The Politician," the Ryan Murphy-produced dramedy of a student at a posh high school's bid to become student body president.

Hall believes "most representation" of trans folks "is still negative," and "many representations rely on harmful stereotypes or one-note representations that reduce trans people to their gender and dehumanize them in the process."

Still, Mailman thinks representation of trans and transmasculine identities in media can help people struggling with feelings of isolation. "If there's one thing the increase in abortion storylines in media has shown me it's that while representation won't solve everything it definitely helps," they said. "It's hard if you live in a rural area to find other trans people."

Back in 2018, Scarlett Johansson, at one point the highest paid actress in Hollywood, gave up a role playing a transgender man — but only after facing significant backlash, and being highly defensive of taking the role. "As an actor I should be allowed to play any person, or any tree, or any animal because that is my job and the requirements of my job," she said at the time. A year later, Johansson admitted she'd "mishandled" the situation.

Hall agrees that they'd like to see storytelling "address the erasure of trans folks who experience pregnancy," but they also think it's "important that the media is nuanced and not sensationalized." That means seeing trans characters and stories that are about more than suffering, more than gender, more than glossy celebrity magazine covers — stories that are real, that capture the full spectrum of trans experiences, and certainly, stories that depict authentic transmasculine experiences with pregnancy and the health system.

In a 2020 Medium post recounting the story of their abortion, Mailman admits that "the most surprising thing . . . after my abortion" was that all they "felt afterwards was relief."

Trans people's experiences seeking reproductive and gender-based health care can come with significant barriers, from exorbitant costs, all while trans people are significantly more likely to cis people to experience poverty, to intolerance and transphobia in the medical system. "We know medical fatphobia is rampant, and medical racism is rampant, and medical transphobia is rampant," they said. "So when you combine those things, and you have a fat, Black, transmasculine person trying to access care, doctors are going to do everything they can to make it hard to get the gender affirming care you need.

"You're going to have to be ready to justify yourself and advocate for yourself at every turn, and it's frustrating to think about. It's stopped me from really looking into gender-affirming care, because I know trying to access that care as someone who is bigger, and not able-bodied, isn't going to be easy."

At a time of tremendous barriers to reproductive care, even for cis people, and distrust of the medical system among trans folks, Mailman says it's not uncommon for transmasculine people experiencing pregnancy or in need of pregnancy-related care to seek it "outside the medical system." That includes self-managing and inducing their own abortions. Today, about a third of abortions are carried out through medication rather than surgical abortion, which can be done from the comfort of one's own home. But trans folks who may fear even going to clinics or talking to providers to get the medication, will often resort to other means.

And it's experiences like this — of transmasculine folks going it alone because of stigma and marginalization in the health system — that we don't often see in upbeat celebrity stories, or one-dimensional onscreen trans characters.

"It's important for cis folks to understand that trans people know self-managed abortion with alternative methods may not be the ideal scenario — but we're doing it because it's what we have access to, and shaming people who have turned to theses methods is not helpful," Mailman said. "It's harder to include trans people in the reproductive justice movement, when a lot of trans people who have had abortions don't feel they have a space."

In advocacy spaces and health care, the past several years have seen crucial progress around acknowledging and including trans experiences with pregnancy and abortion — for starters, with gender-neutral and gender-inclusive language about who experiences pregnancy, and who seeks birth control and abortion. Gendered language about reproductive care persists, however. Consider frequent references to reproductive rights as "women's reproductive rights," or "women's right to choose" in political media. But when well-meaning people encounter language like "pregnant people," or "pregnant-capable people," or "people who give birth," they begin to ask questions and learn more.

Oliver Hall may have their criticisms of limited and un-nuanced media representations of trans and transmasculine identities and health experiences — but ultimately, it's not all bad, and has contributed to meaningful cultural change in recent years.

"I think in the long-term, greater cultural understanding of the needs of trans people is net good. We are just at the start of this cultural shift, so you're seeing systemic changes in some areas," Hall said. But that cultural progress isn't necessarily equally distributed, for example, in places like "the south, red states, and rural areas," where "change around trans health is not happening as quickly at a systemic level."

Rather, in these aforementioned spaces, change to support trans folks is happening more so "at a community-level with mutual aid and support being the source of expanded access to health care," Hall says. Storytelling and media coverage about trans and transmasculine experiences can't just be limited to an individual story of a wealthy celebrity here and there. As inspiring and joyous as stories like Elliot Page's may be, in real life, trans identity, trans survival, and trans people thriving, all rely on the power of community — and that's why Hall thinks we can all "learn from the strong support and aid networks we form in the south."