LeVar Burton has a shaky "Jeopardy!" debut, but he's still very much in this game

The "Reading Rainbow" icon has all the right host qualities, but he has stiff competition in Robin Roberts 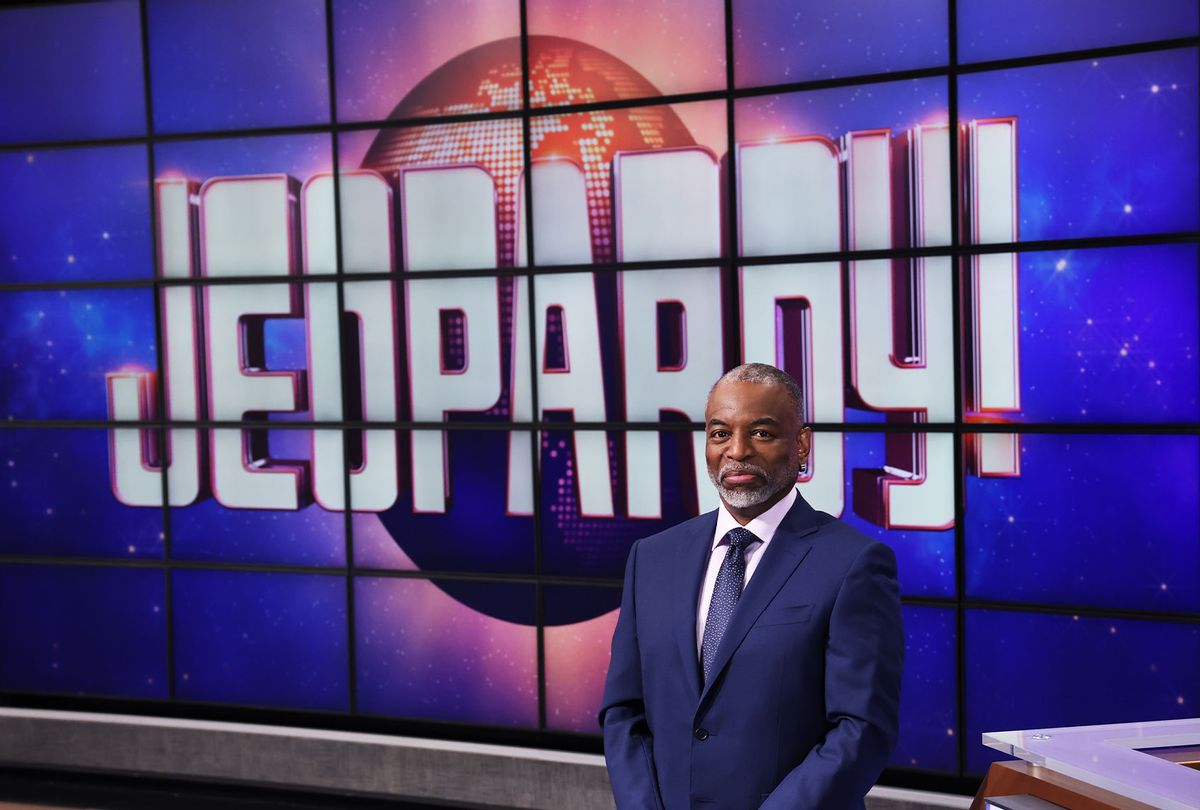 "Jeopardy!" producers have welcomed more than a dozen guest hosts to its podium since January, but only LeVar Burton arrives with the wind at his back. In sailing terms this is a boon. On land, a good gust can knock a person off balance which, in a figurative sense, explains Burton's struggle in his astronomically anticipated debut on Monday.

Among all of the contenders to permanently replace the late and adored Alex Trebek, Burton's tryout was designed to attract the highest level of attention and anticipation.

Late last year, the 13-time Emmy winner inspired a Change.org petition to persuade the show's producers and Sony Pictures Television to name him as Trebek's successor. It is still racking up signatures, with around 260,000 people having added their names at publication time. The prospect of Burton taking over for Trebek so excited the popular imagination that the New York Times gave him a lengthy profile. "The View" also invited him on to benevolently instruct Meghan McCain on the canard of cancel culture.

Opinion writers including yours truly have made the case for him to get the job based on his career qualifications, popularity and advocacy for education and research. Now that we've gotten a look at what he can do, my opinion hasn't changed.

Yes, he endured a few minor stumbles, including a misstated disqualification that led to points being restored to one contestant. Those only serve to emphasize Burton's humanity. It proves that seasoned veterans still get opening night jitters. Moreover it also show how badly Burton wants this job.

For a moment, let's remove affection and nostalgia's influence from the equation and contemplate the question behind this high-profile competition for one of television's most respected roles: What do we require from a "Jeopardy!" host? It's a simple yet deceptively complex consideration.

One of the many realizations this months-long marathon of tryouts has revealed is how uniquely difficult replacing Trebek is shaping up to be. His legacy is gigantic, both in terms of the show and on TV. As I previously wrote, he's part of an exclusive firmament that includes Dick Clark, Regis Philbin, Monty Hall, Richard Dawson and the retired Bob Barker, personalities whose voices and styles are immediately recallable in the context of their game shows.

Trebek stands apart because he wasn't merely an emcee. He symbolizes the value of extensive varietal knowledge, an increasingly underappreciated virtue in American culture. Anyone can compete on "Jeopardy!" but not everyone passes the test required to make it to that stage.

Hand in hand with this was his sensitive treatment of contestants, which was unique among his kind on TV. Regardless of a person's age, race, cultural identity or gender, Trebek approached everyone with a calm, steady kindness, even when someone answered a question incorrectly. Wrong responses elicited a gentle "no" or some nonabrasive expression of regret,  comforting competitors and viewers alike. Snobbery never colored his interactions.

Burton's persona radiates these qualities. To generations of viewers who grew up watching him on TV, whether in 1977's "Roots" or even as Geordi LaForge on "Star Trek: The Next Generation," the 64-year-old actor's name is synonymous with intellectual pursuit and honesty. To generations of children in whom he instilled a love of reading during his lengthy run on PBS' "Reading Rainbow," he is synonymous with thoughtful grace.

He also has a list of accolades to his name within the entertainment industry. In addition to his Emmys, he's also a Grammy and Peabody Award winner, he holds honors from the PEN/Faulkner Foundation and The Inamori International Center for Ethics and Excellence at Case Western Reserve University. These burnish his reputation, but his even-keeled nature matters more in this job.

The trick is in finding a way to pay homage to Trebek's style without trying to replicate it entirely, which may have contributed to Burton's shaky first appearance. His level comportment and steady emotionality were clues that he'd done his homework for this role, in the way of any great actor.

But live-to-tape television calls upon a different skill set than other productions – a hint of natural liveliness and the ability to recover quickly and Aikido-roll out of any verbal stumbles. When we're in the flow of the game, "Jeopardy!" doesn't offer multiple takes. Hopefuls who work in news or sports excelled in this respect because they're used to live TV's less forgiving nature. That said many couldn't adjust their one-take effusiveness to suit this production. (Anderson Cooper, Dr. Sanjay Gupta and Savannah Guthrie, I'm looking at you.)

Burton held his own, but toning down his natural charisma to approximate neutrality made him come across as stiffer than usual. His "no" replies to incorrect answers were curt. Then again, that reaction could be because "Good Morning America" co-anchor Robin Roberts' tryout aired the week before Burton's time on the show, and she nailed it.

Roberts' easy bonhomie with contestants worked well, although initially her enthusiastic felt a touch too loud for this venue. However, and this crucial to remember as it pertains to Burton, Roberts' demeanor in her Friday "Jeopardy"  was much smoother than in her premiere.

Every live TV host takes a few rounds to find their rhythm, whether they're helming a daytime game show or late-night talker. That's something I'm hoping "Jeopardy!" producers bear in mind when evaluating these auditions, along with the fact Roberts, Burton, their predecessor George Stephanopoulos and the remaining entrants (CNBC's David Faber and Fox sportscaster Joe Buck) each received one-week tryouts. Other guest hosts benefitted from at least two, save for Ken Jennings, who opened this pageant with a whopping seven-week run.

Before Trebek died he said that the show's fate was never expressly tied to him.

"Keep in mind that my success to a great extent has depended on the success of the game," Trebek told TV critics at an industry event. "You could have put somebody else in as the host of 'Jeopardy!' 36 years ago – not everybody, but there are some individuals who could have been named as host of 'Jeopardy!' – and if the show had lasted 36 years, they would be enjoying the same kind of favorable reviews and adulation that I have enjoyed in recent years."

He also opined that a woman should replace him, which could very well happen. Roberts' inviting personality aligns with Trebek's hosting style while being unique enough to place her own stamp on the standard-setting quiz show. She would be a sensational permanent host.

Her hire would break a too-long streak of the industry featuring white males . . . and "Jeopardy!" producers displayed a distinct lean in that regard. Katie Couric, Mayim Bialik Guthrie and Roberts each had turns steering the program's fast-paced trivia gauntlet. Provided the existing list of guest hosts is complete, they comprise four of 16 prospects. Similarly, out of that 16, four are people of color: Roberts, Burton, Gupta and "60 Minutes" correspondent Bill Whitaker.

Burton still needs to close the sale, but he got off to a decent start – albeit one overshadowed by the history-making performance of Patrick Pearce, who set the record for lowest score by finishing with negative $7,400. I'm still pulling for Burton and I have confidence he'll relax into his role by the time he calls Final Jeopardy one last time, at the end of this week.

He has serious competition to outshine, the toughest being the least famous name on the roster:  "Jeopardy!" executive producer Mike Richards, who occupies the top slot in a number of ranked lists for replacement host. That's to be expected of anyone who spent years in Trebek's presence and has intimate knowledge of his approach and ethos. If Sony is seeking familiarity in the show's next host, Richards is a strong option and one who could prove yet again the old adage that TV makes its stars, not the other way around.

For anyone who hasn't been following the program's guest host parade very closely, the natural response may be, "Who is Mike Richards?"

Tapping Burton or Roberts wouldn't get that response or the accompanying disappointment at upholding the white male status quo on a show built upon the egalitarian ideals of ability and effort. Either would be a win. What remains to be seen is whether producers are savvy enough to read the room.