A farewell to harms: Meghan McCain exits "The View" but may have tainted it forever

America will soon be free of regular updates about Meghan McCain. She'll be missed – and that's a problem 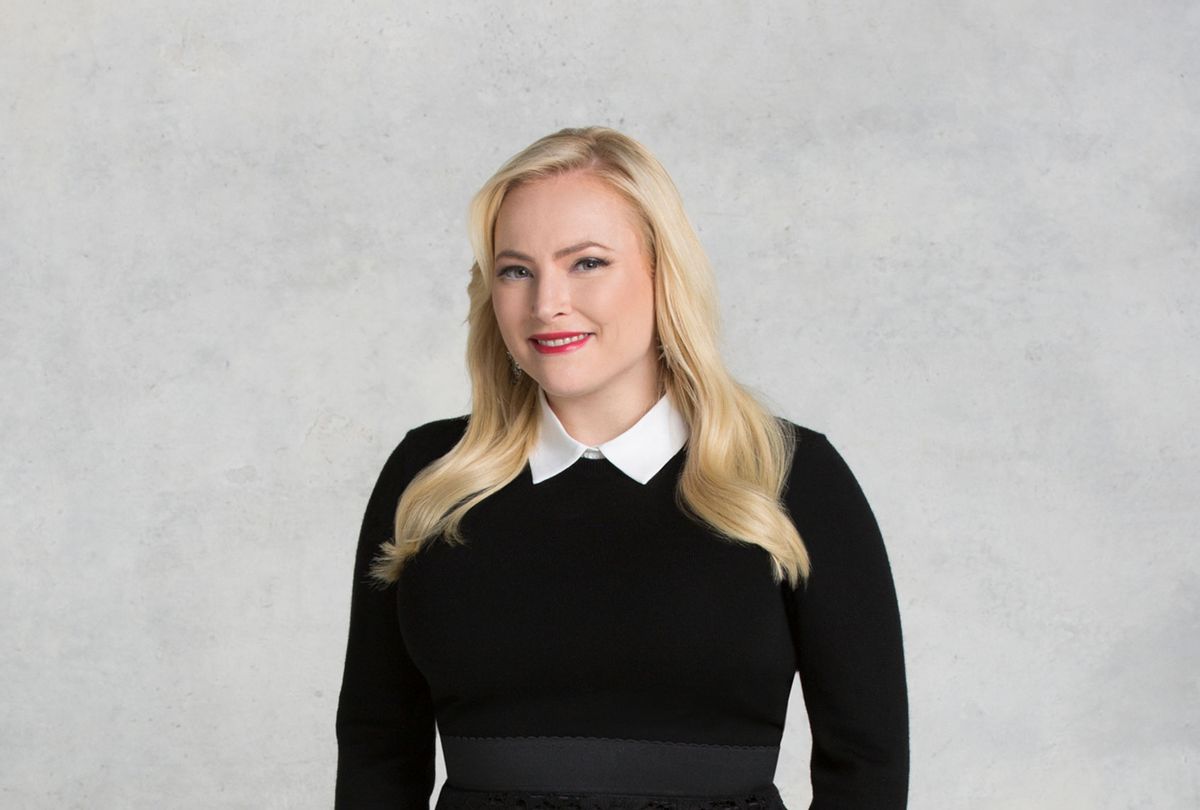 The end of this week marks the end of an era for the millions of people who tune into "The View" for their daily spleen-venting courtesy of outgoing co-host Meghan McCain. After Friday's telecast we won't have her to kick around anymore. Not on a near-daily basis, anyway. (In the near term she's signed on to executive produce a Lifetime biopic starring Heather Locklear.)

But McCain's official departure from "The View," which she announced on the air July 1, leaves daytime television's most politically influential talk show without its "sacrificial Republican," as she once claimed to be in a fit of self-pity. Whatever will we do without the sustaining power of her wingnut-flavored granola?

To "The View," McCain was more than a spout of parbaked twaddle delivered with tell-it-like-it-is confidence. She was a voice of false equivalency and "but what about"-ism, representing America's extreme right-wing Karens. Occasionally she would vanish when a guest with whom she didn't want to engage appeared. But she wasn't just a purveyor of half-truths and Fox News talking points. She offered the very important perspective of women who make everything all about them.

Whether a given episode's Hot Topics concerned reproductive rights, identity politics, voting rights, cancel culture, protests against police brutality, anti-Asian violence, or anything related to the pandemic – especially as it pertains to who's to blame for stagnating vaccination rates (hint: it's Republicans, Meghan!) – McCain always found a way to redirect the road trip right back to her doorstep.

Except, that is, on the topic of nepotism. For that, she had bright orange detour signs to redirect us.

"I think my work and my work ethic speaks for itself," the daughter of the late Arizona Senator John McCain declared last week while addressing Ben Stiller's assertion that Hollywood is a meritocracy offered in defense of a group of moguls' kids planning to make a movie together.

Anyway, this week she accused CNN's Chris Cuomo of "the worst kind of nepotism that the media has an example of" for not covering the civil investigation that found his brother, New York governor Andrew Cuomo, guilty of sexual harassment on his show. So there.

Four years' worth of her eyebrow-raising blurts made "The View" a central media attraction. But that wasn't entirely about her. Whoopi Goldberg's confused and horrified reactions at her opinions were GIF goldmines. Joy Behar's acerbic rebuttals and outright smackdowns and Sunny Hostin's educational reads gave life to late-night comedy monologues and slow news days.

For people who live to drag dumb takes on social media, McCain and the conflict she created were reliable ways of bumping up in an era that's generally bummed us out. She was exhausting, but what she brought out in Behar, Goldberg and Hostin made for memorably entertaining TV.

But entertaining TV isn't necessarily good for healthy discourse. Often its effects are the opposite, tilting what should be illuminating exchanges into street brawls.

"The View" has lasted for 24 seasons and cycled nearly two dozen co-hosts through the New York City studios where it's been produced. The show will certainly outlast McCain. Remaining to be seen is whether the havoc she regularly wrought since joining in 2017 will permanently change its chemistry, much in the way some drugs can permanently alter brain function.

In this scenario, the drug is frivolous anger.

Anger is a natural human emotion – healthy even, in the right circumstances. A motivator, when applied purposefully. Angry gets s**t done.

Frivolous anger functions differently, acting more like an opioid than a benign stimulant. The longer that it's intravenously pumped into our systems, the more difficult it is to quit. Anyone who survived the last five years knows this all too well.

But we can't overlook the fact that Donald Trump injected anger into "The View" via Rosie O'Donnell back in the mid-aughts. The feud he picked with her bled into the show and eventually destroyed her relationship with that era's supposed sacrificial Republican Elizabeth Hasselbeck.

You can still watch the 10-minute, May 2007 slugfest  that resulted in O'Donnell quitting the show directly afterward. People really should, because it's instructive. It marks the start of a reformulation that eventually brought McCain, previously a host on Fox News' "Outnumbered," into mainstream America's living rooms.

Hasselbeck, a post 9/11 conservative during George W. Bush's administration, wasn't especially beloved in her day either. "We used to fight on the air all the time," she recalls in a 2019 visit to "The View" to promote her new book. McCain is downright bubbly in that clip, laughing enthusiastically and jovially chirping, "What's that like? I don't know!"

Behar answers with, "It's a little different. But truthfully, we never fought backstage. See, that's the difference." At this, a wave of  "oh no she di-int" ooooh -ing fills the place.

"'The View' has become an influential political talk show because it isn't one," Amanda FitzSimons wrote in 2019, part of an expansive New York Times Magazine profile of the show, it hosts and its political and cultural influence.

FitzSimons was referring to the stealthy potency of the show's cultural heft, which has evolved from the idea-exchanging kaffeeklatsch the show's creator Barbara Walters originally envisioned into a political opinion battleground, sometimes friendly but often not entirely. The secret sauce, other than the show's careful co-host curation, is the moderator's ability to prevent episodes from descending into complete bitterness.

This was easier to do when everyone was in the same room, sharing a table. Having to look your co-workers in the eye tends to lower the temperature in most interactions. Beaming each co-host in remotely during the pandemic only exacerbated the rifts present since McCain joined the cast.

Without a live audience reminding the co-hosts that people at home were watching, and with the editing filling the screen with Behar's and Goldberg's unfiltered reactions to McCain's pop-offs, "The View" merged into some combination of a sideshow and a pile-on.

When Twitter or CNN react to headline-making moments "The View" generates on any given day the topic of discussion is secondary to the bickering.

We remember when McCain called Behar a bitch on the air, but can you recall the circumstances? More recently Whoopi and McCain degenerated into a back and forth of "I don't care that you don't care," but who can cite what everyone wasn't caring about off the top of their head?

Everyone singing the "ding-dong" song from "The Wizard of Oz" has a right to enjoy whatever the relative silence her absence yields. Then we should be concerned about who or what takes McCain's place.

An analysis in The Wrap states that McCain's tenure with "The View" did not result in a substantial ratings boost, although the show's audience has been holding steady where other shows have weathered audience erosion – especially its CBS daytime rival, "The Talk."

Indeed, according to Nielsen ratings, "The View" is experiencing its best season since McCain joined, leading daytime among total viewers and households for the first time in the show's history. (The trade publication's article credits the 2020 election cycle for this, which I agree with.)

That she juiced the daytime talker's social engagement level is indisputable. Seeing the program's hashtag trend on Twitter is enough to elicit a Pavlovian response at delighting in whatever new memes may have resulted in that day's smackdown.

It's equally as likely, though, that whatever she said or did created another opportunity to enjoy anew the famous "one of these things is not like the other" tile screenshot of the other hosts laughing as she scowls in the lower corner. Either way, it got people talking, which has currency to ABC.

In the same way television news coverage slid steadily rightward in reaction to Fox News' ascent, McCain's success in securing attention for "The View" raises the probability that its next right-wing representative will be even more divisive and less capable of good-faith debate. (Imagine someone like Tomi Lahren taking McCain's position. Behar might spontaneously combust before our eyes.)

Debate is a conversational artform the show tossed out some time ago without losing our attention, so why fix that dysfunction? Something about it seems to be working.

On the other hand, the strength of "The View" has long rested in its ability to strike a liberal-leaning centrist conversational tone that combines disparate paradigms, often with volatility and good humor. Should the producers find a reasonable, right-tacking conservative unicorn with a fierce, informed perspective who can disagree with her colleagues, but who doesn't come off like a caustic lunatic (best of luck with that star search!) she may reinvigorate the show's dynamic.

People would still despise her. Twitter will have that woman for lunch. But maybe she'll win something for herself and that McCain was never capable of doing: a modicum of respect.