When to admit you're wrong: JFK's lessons for Joe Biden

John F. Kennedy took responsibility for the Bay of Pigs debacle — and it worked. Biden should study that history 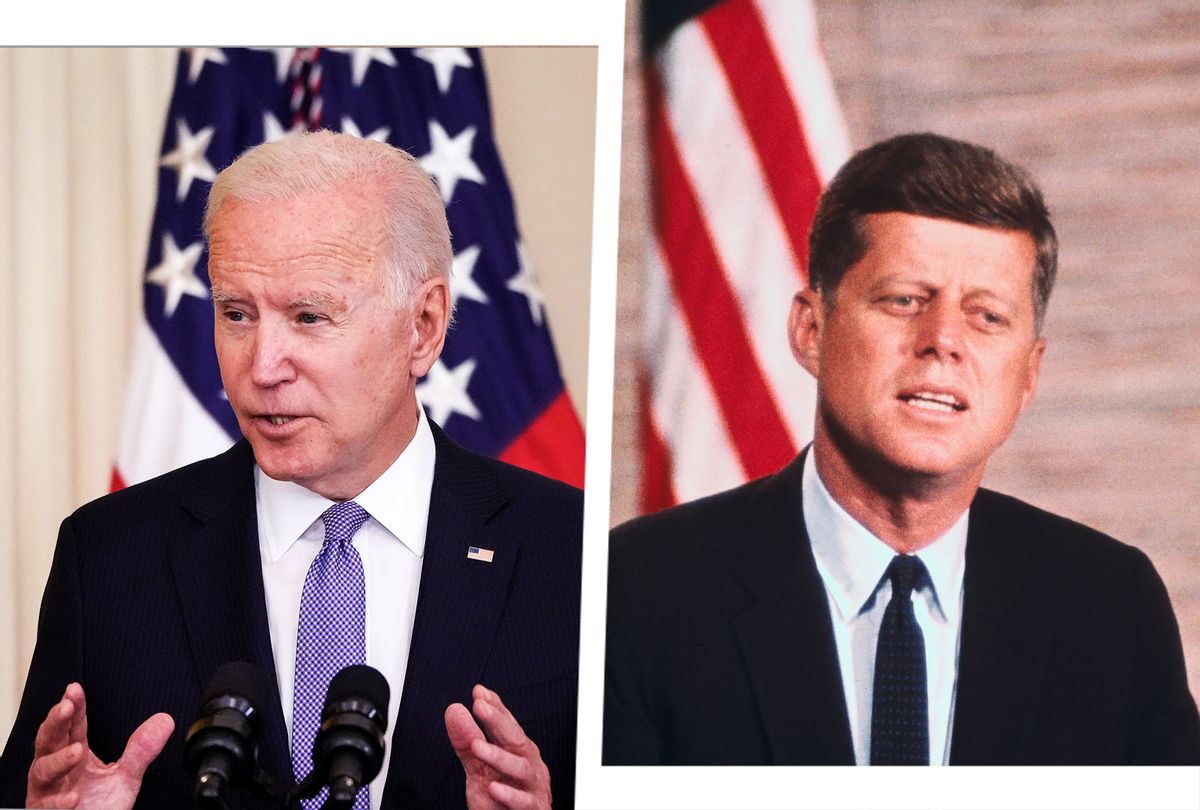 The eviction moratorium crisis may have come and gone — though likely not for long — but it illustrated a crucial lesson in leadership that Joe Biden needs to learn, and soon. In a free society, the people at the top owe it to the public to admit when they made a mistake. After that, they must learn from those mistakes, even if that means assuming considerable political risk.

To understand why this principle is so important, let's look back at the brief but memorable presidency of John F. Kennedy.

Upon taking office, Kennedy inherited a plan that had been hatched under his predecessor, Dwight Eisenhower, to invade Cuba and overthrow the Communist government led by Fidel Castro. This plan ultimately culminated in the Bay of Pigs fiasco, when a group of Cuban exiles funded by the U.S. government landed on Cuba's southwestern coast, hoping to spark an anti-Castro revolution. The invasion was badly planned and poorly executed, and ended in total failure, with the exiles captured and paraded before television cameras as evidence of American ineptitude.

Kennedy's supporters blamed bad military advice and bureaucratic incompetence for the Bay of Pigs disaster, while his critics blamed JFK personally for withholding U.S. air support for the rebels. Cold War tensions were at a fever pitch in 1961, and this failure could easily have dealt a death blow to Kennedy's young presidency, just three months into his term. Many Americans were terrified of the specter of Communism — and of the Communist island nation less than 100 miles from Florida.

How could any president — particularly one who had barely won one of the tightest elections in history, and who was already being accused by Republicans of being "soft on Communism" — recover from such a major foreign policy blunder?

Simple. First, Kennedy set aside whatever reservations he might have had about accepting the blame, at least for public consumption. Which is not to say he wasn't privately pointing the finger at others. He reportedly told one aide, "If someone comes in to tell me this or that about the minimum wage bill, I have no hesitation in overruling them. But you always assume that the military or intelligence people have some secret still not available to ordinary mortals."

But Kennedy had the wisdom to accept that a leader must take the blame whether or not it's deserved. (A striking contrast to our recent president who regularly threw his own staffers under the bus, and literally never accepted blame for anything.) So his second critical choice was openly accepting responsibility. When he appeared before the press to announce the humiliating failure of this major foreign policy initiative, he declared:

There's an old saying that victory has a hundred fathers and defeat is an orphan. ... Further statements, detailed discussions, are not to conceal responsibility because I'm the responsible officer of the Government...

Kennedy's final critical choice was not simply to own his administration's error, but learn from it. As his presidency continued, Kennedy began to challenge the belligerent assumptions underpinning the Cold War. By 1963, he was even able to do something many pundits felt was politically impossible — making the Partial Nuclear Test Ban Treaty negotiated with Soviet leader Nikita Khrushchev into a reality. We'll never know if Kennedy would have brought the Vietnam War to an earlier close or otherwise staved off some of the Cold War's worst tragedies, but he at least revealed a capacity for personal growth on issues of American imperialism.

JFK's willingness to challenge the military-industrial complex arguably saved the world from apocalyptic disaster during the Cuban Missile Crisis of 1962, when he ignored recommendations from supposed military experts that could have plunged America and the Soviets into a nuclear war. There are reasonable indications that Kennedy intended to reduce the U.S. involvement in Vietnam and other dangerous foreign entanglements.

Flash forward six decades. While foreign policy and domestic policy mistakes are obviously very different kettles of fish, Biden's eviction moratorium bumble is somwhat analogous to the Bay of Pigs invasion, at least in that it marks the first undeniable error of the Biden presidency. We don't know everything that occurred behind closed doors, but it appears the White House waited until the last minute, for no good reason, before announcing that it would not extend the emergency eviction moratorium passed by Congress to protect renters during the pandemic. That left Congress scrambling to find a solution — literally as members left Washington for the August vacation — before the Centers for Disease Control and Prevention finally announced a 60-day extension of the eviction moratorium, but only in U.S. counties with "substantial and high levels of community transmission" of the coronavirus.

The most generous way of interpreting this screw-up is that Biden's team sincerely believed they shouldn't try to order another extension that would likely be thrown out by the Supreme Court, but fumbled on effectively conveying that to the public. But the subsequent position reversal risks bringing about precisely the outcome they had hoped to avoid: Buying a little of time but creating a legal hornet's nest (which is already starting to happen) as landlords fight the new policy. That's better than nothing for vulnerable renters, but ultimately amounts to little more than a delaying tactic that fails to resolve the crisis.

Another possibility is that the White House viewed the eviction moratorium as a low priority, and were surprised by the massive pushback. If that's what happened, they owe a giant debt to progressives in Congress like Rep. Alexandria Ocasio-Cortez and Rep. Cori Bush, who applied the head and gave the Biden team an opportunity to do the right thing while saving political face. It is also conceivable that the Biden administration defaulted to "moderate" or "bipartisan" political thinking, and decided to throw renters to the wolves in the name of strict legal propriety, failing to realize how profoundly that would anger the Democrats' progressive base.

That last fact — the widespread anger among their own voters — is a crucial ingredient here, leading to the lessons Biden should take from JFK. If Kennedy stumbled into a supposedly "radical" position by challenging Cold War hawkishness after the Bay of Pigs debacle, Biden has suddenly learned that millions of Democrats no longer view private property rights as paramount. Instead, they think it's morally unacceptable and dangerous to public health to force tenants into homelessness as the COVID-19 pandemic resurges. This may be the result of specific circumstances right now, but it also reflects the cumulative impact of the 2008 and 2020 economic crashes, which have dramatically worsened economic inequality.

Going forward, Biden has an opportunity to challenge neoliberal orthodoxy — which is already massively unpopular with the public —just as Kennedy challenged Cold War orthodoxy. Indeed, if Biden doesn't do that, it will be another major failure of his presidency.

The other lesson that Biden can learn involves trust. The president has done much to repair his reputation for fudging the facts since taking office, and he has the benefit of following the most overtly dishonest president in the nation's history. But let's remember that Biden has been credibly accused of plagiarizing other people's words and speeches twice during his political career. His handling of Clarence Thomas' confirmation hearings as Senate Judiciary Committee chair in 1991 was disgraceful. He has frequently tried to make himself sound like a principled early critic of the Iraq war, which isn't even remotely true. There is also something fundamentally weaselly about Biden's refusal to admit that the Senate filibuster is an anti-democratic, extra-constitutional practice that has often been used to impede civil rights and voting rights — and is being used that same way right now.

If Biden's credibility gap is creeping back into public consciousness right now, that's for good reason. By far the best way to address that is to stand up and take responsibility for his mistakes. The moment has almost certainly passed for Biden to come clean about the eviction moratorium. That's regrettable: It would have provided an instructive contrast to Trump's bluster and blame, and established Biden as a candid and self-aware grownup. (As, for the most part, he is.)

But Biden still has the opportunity to admit being wrong about other things. It would do wonders for the president's reputation if he stood up and admitted that his loyalty to the filibuster was a misguided figment of the past. Things have changed, and it's time to ditch this anachronism and move on. Of course something else will come up, whenever inevitable human frailty interferes with policy implementation, and he'll surely get the chance for a "failure is an orphan" moment of his own.

After four years of a president bellowing in rage and blaming others over even the most tepid criticism, it would be refreshing and healthy to hear a president simply say, "I was wrong." Those three words could be as radical a transformation as any policy metamorphosis. They would build on Biden's most obvious political strength, the basic human decency perceived even by his political enemies.

Nearly 60 years after his death, John F. Kennedy remains an iconic president because he appeared on the American scene as a new and surprising kind of leader. Even though Joe Biden is the oldest person ever elected president — while Kennedy was the youngest — he has the opportunity to learn from Kennedy's example, and to be just as surprising and invigorating.