On “FBoy Island,” the feminist “Mansplain” puts an end to “bros before hoes”

Who knew a reality dating show could find a way to stop men enabling each other's toxicity? 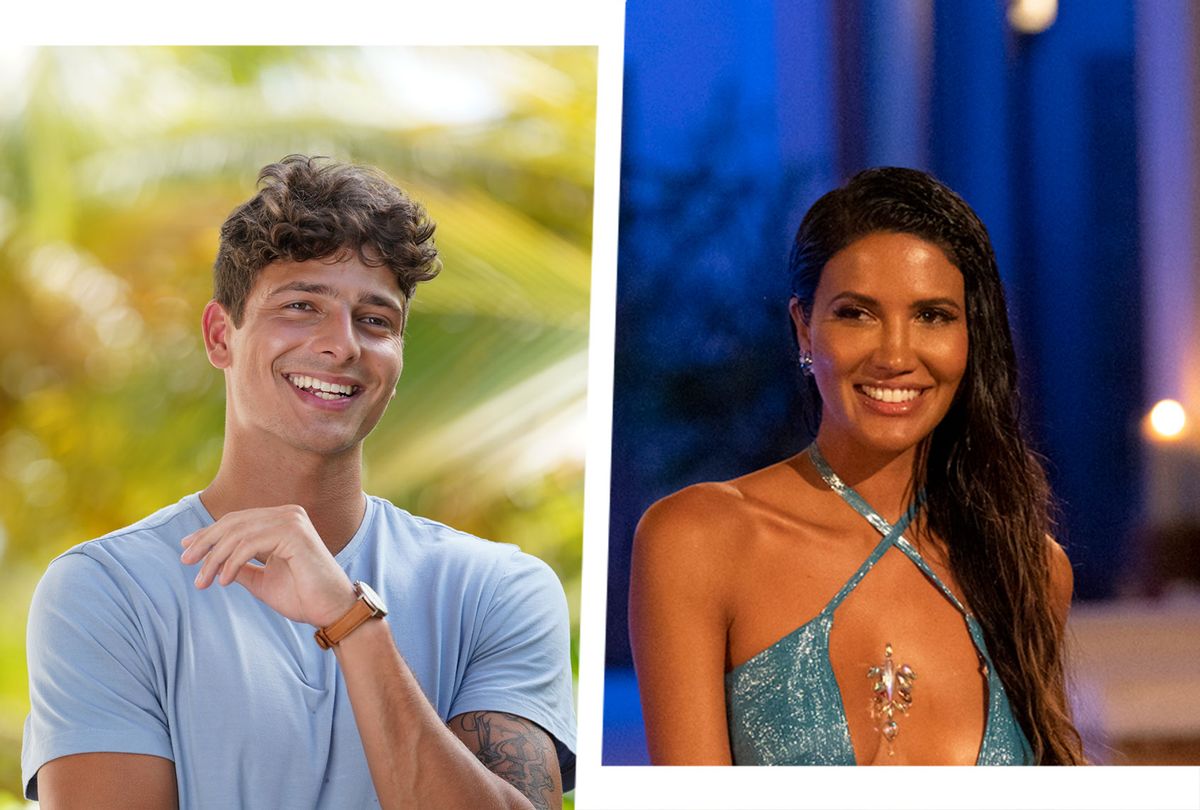 The following discusss the penultimate episode of "FBoy Island." You can also check out the series creator's thoughts about the big finale twist and possible future seasons.

HBO Max's "FBoy Island," the fan-favorite dating show starring Nikki Glaser and three women seeking connection among an even split of fboys and nice guys, has wrapped in a blaze of drama, steamy overnight dates, and, of course, snitching. What would any reality dating show be without snitching, really?

While "FBoy Island" has paved a path of its own in the tired dating show genre, driven by humor and all the cynicism of the dating-app-world we live in, it also draws obvious inspiration from previous dating shows like "The Bachelor." Among the most famous "Bachelor" and "Bachelorette" segments are the special "Men Tell All" or "Women Tell All" episodes close to the season finale, when all contestants from the season return to dish, confront each other, and spill the tea.

In its penultimate episode, "FBoy Island" puts a cheeky twist on the "Men Tell All," with an unforgettable segment called the "Mansplain." The "Mansplain" may follow a similar format to the "Men Tell All," but with a number of crucial, spicy twists. First of all, each of the women — Nakia Renee, CJ Franco, and Sarah Emig — and their two ultimate suitors are present at the event and sit in hot seats before the entire cast, upping the tension and drama exponentially.

The other key difference is, rather than focus on booted contestants' often relatively generic self-reflections, the "Mansplain" is quite literally all about snitching. Petty? Yes. Messy? Absolutely. Subversively feminist? That too. "FBoy Island" is far from the only dating show that's seen men snitch on each other for a chance at love and fame, and on "The Bachelor," male contestants telling the lead that so-and-so isn't here for "the right reasons" are a nightly routine.

But the "Mansplain" of "FBoy Island," delightfully named, for starters, is different. The final decision between the two men has not been made yet, and thus the actual snitching has weight and can affect the outcome.

As a reminder, the show doesn't just consist of one woman for whom all 24 men compete. It has three leads, and most of the cast split up early on to focus on vying for one specific woman. Beyond the female lead whom they set their romantic sights on, and this means that some men cultivate a friendship with the women they aren't pursuing, yet another refreshing feature of the show.

By the "Mansplain" in Episode 9, many men seem loyal enough to their friendships with the women they hadn't even been romantically pursuing, that they're willing to tell them the truth about the finalists and try to protect them from malicious suitors, without benefit to themselves. This might not seem like a big deal, but ultimately, it's a significant step toward dismantling the toxic "bros before hoes" culture that's long dominated dating norms and male friendships, and protected abusive, disrespectful or just toxic, harmful men from accountability.

Arguably one of the most alarming revelations of the #MeToo movement has been the lengths men go to keep each other's secrets, in many cases regarding harming women, or at least privately joking about truly awful behaviors at women's expense, behind women's backs. Enter: the "Mansplain," which seeks to put an end to this.

The flood of spilled tea from contestants past is immediate and shocking. Matthew, a former contestant, claims Garrett, one of Sarah's finalists, had privately disparaged her body and said he would have to "buy her a pair of fake boobs" if he were to be seen out with her in Los Angeles. Matthew also reports that after Garrett's first date with Sarah, he returned and said Sarah "wanted to use him for his money to start a business, insinuating [Sarah was] a gold-digger." Collin, who at no point romantically pursued Sarah, weighs in that Garrett simply "isn't a genuine guy" and will hurt Sarah — which, as those who watched the finale know, is a little on the nose.

When it comes time for the men to address CJ's finalists, the drama reaches a fever pitch. Right off the bat, Chris, a contestant who had romantically pursued Sarah, tells CJ with Casey sitting right next to her, "CJ, according to Casey, you're a glorified escort. Also, he said he can't wait to get that money to teach you a lesson." Shocked at being confronted by what he allegedly said, Casey simply gets up and leaves, and has to be convinced by a producer to go back, participate in the show, and respond.

It really was a spectacle, even for a contestant who had previously stood before the entire cast and declared CJ didn't deserve any one of the men because she'd hurt his feelings. At the "Mansplain," it was painfully clear he'd never been confronted about his words and behaviors before, and had no experience being called on to justify or explain himself.

But finally, when pressed for answers about the truth of the accusation, Casey not only confesses to have made some variation of the "escort" remark behind CJ's back, but also confesses that Garrett — his best friend — was the one who suggested this to him. "OK, there's something wrong with being an escort, but you two can 'F' us for money?" CJ retorts.

Aside from the obvious fact that, as CJ suggests, being likened to a professional escort shouldn't be an insult, here, we witness the real, subversive power of the "Mansplain." Despite Casey's ultimate, half-hearted honesty, there's little to give him credit for. Credit is instead owed to the extreme, pressure-cooker environment of the "Mansplain" that demands men either own up to their awfulness and try to make amends, or, as Casey briefly did, simply leave. And frankly, that should be how it is, not just on televised dating shows, but in life!

The "Mansplain" is a perfect reflection of the potential for change in men's treatment of women, even change in patriarchal society at large, when men stop protecting, enabling and hiding behind each other, and instead confront and pressure each other to do better, to own up to their toxicity — and not just when winning over a woman for themselves is on the line. Say what you will about indefensible, abusive men, or sleazy, real-life fboys who take pride in using, manipulating and deceiving women — but there's also plenty to say about the men who may not be abusers or fboys, but remain silent about their friends who are.

Women have put in enough work trying to protect ourselves, each other, and fight for meaningful cultural change to be treated with dignity and respect. Now, as the dramatic "Mansplain" on "FBoy Island" shows us, it's time for men to do their share of the work, and gather and hold each other accountable.