There’s almost nothing less fun than a reality show that takes itself too seriously, and expects us to, as well 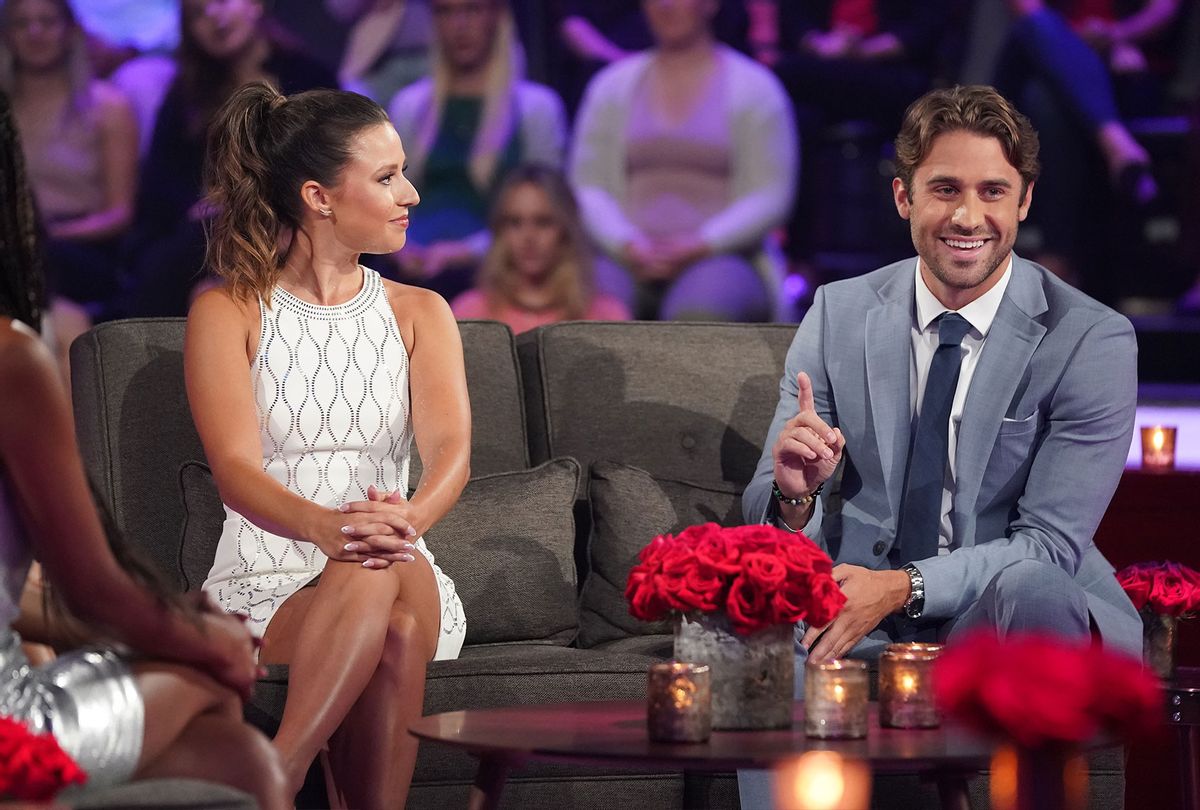 The Bachelorette, Katie Thurston, and Greg at the "After the Final Rose" segment (ABC/Eric McCandless)
--

In case you missed it: First of all, you really didn't miss much, and second of all, here's what happened. While Katie is ultimately charmed by Blake's romantic confession of undying love, which leads to an engagement, it's the guy who got away who overshadows the narrative. You see, in the penultimate episode, Blake's notorious rival Greg had, like, "really, actually fallen in love," and since Katie could not fully reciprocate his feelings (it wasn't the finale yet!), he couldn't handle the competition and bailed.

Their highly anticipated reunion for the "After the Final Rose" special results in an enjoyable dialogue in which Katie unapologetically unleashes her rage at Greg, distinguishing this finale from the peacemaking likes of its many, many predecessors. Still, one can't help but feel like we've seen it all before from the Gregs of the franchise who can no longer abide by the conventions of a reality dating show and exit with the same recycled speeches about how "real" all of this was for them.

The fact that contestants like Greg are supposedly so caught off guard by actually catching real feelings on a dating show that they have no choice but to leave, arguably says everything we need to know about the authenticity of their intentions when joining — and the authenticity of the "Bachelor" franchise, overall.

That said, for those of us who have tired of the soliloquies of the Gregs of "Bachelor" nation, new, rival dating shows for the social media age like HBO Max's "FBoy Island" make for a compelling alternative.

Perhaps the biggest "Bachelor" franchise problem is that it puts marriage – marriage – at stake for the contestants. Arguably one of the most important decisions one has to make, it's gamified and then forced to meet a predetermined deadline. It's engagment or bust on "The Bachelor," which doesn't put pressure on the contestants at all to make choices under heightened, fantasy circumstances. Yes, the show draws a devoted audience, but how many of those who enjoy the dramatic journey are just as prepared for the couples to break up a few months down the line?

In contrast, "FBoy Island," is purposefully anything but serious. Even its premise – three women looking for love among a mix of self-identified nice guys and self-identified fboys, who are shamelessly on the show for clout and a chance at $100,000 – understands that the real draw is in trying to sniff out deception. It's up to the women and host Nikki Glaser, armed with her usual, irreverent feminist dating humor, to scope out who's who, and possibly teach an fboy a lesson along the way.

Shows like "FBoy Island," made by a "Bachelor" producing alum who wanted to create a dating show that reflects the realities of the age of Tinder, speak to a critical truth that's emerged since the first episode of "The Bachelor" aired in 2002: No audience member is taking dating shows seriously anymore.

Look, it's 2021. All we have to do to know who these contestants are and that they're on our television screens for publicity is scroll through their social media feeds. They're on the show to bring enough attention to their Instagram accounts, sell some diet teas, possibly land a fashion collaboration with boohoo or some other Instagram boutique. The goal is to rack up sponsorships, eventually slap their name on some uninspired app start-up, maybe even wind up on a "Bachelor" spin-off or land an equally ambitious, equally attractive social media influencer as a romantic and business partner.

By continuing to take itself seriously, the "Bachelor" franchise is unintentionally, embarrassingly funny – kind of like your outdated elders  referring to Facebook as "The Facebook." In contrast, realism, dating app-savy instincts, and social media sleuthing are baked into the deliberate, relatable and deeply self-aware humor of "FBoy Island."

In the show's first episode, Glaser jokes, "Do good guys really deserve to always finish last? And do fboys always have to finish . . . on our face?" Chris Harrison, the recently departed, near 20-year host of "The Bachelor," could never.

Speaking of Harrison, the story of his departure is pretty interesting — arguably more interesting than most of the show's recent seasons. Harrison left the show earlier this year after a storm of controversy when he defended a previous contestant's past, racist behavior attending a plantation-themed frat party in 2018. Rachel Kirkconnell, the contestant in question and winner of former "Bachelor" lead Matt James' season, herself, had apologized and called for no one to defend her. Nevertheless, Harrison answered that silent call. His tone-deaf, patronizing rant, which felt awfully callous about the horrors of slavery and ongoing white supremacy, was directed at a Black woman — former "Bachelorette" lead Rachel Lindsey — who had been trying to educate him.

In any case, the entire debacle — like many previous debacles involving contestants outed for racist, sexist or otherwise bigoted and abusive histories — might have been avoided entirely with some more thoughtful or cautious vetting from the casting directors and producers. The list of "Bachelor" offenders past, including former, now notably single "Bachelorette" lead Becca Kufrin's pick Garrett Yrigoyen, who "liked" social media posts mocking the Parkland students and trans people, is long. Like, really long.

But other than being caught waving Blue Lives Matter flags and all, other contestants have been outed for having significant others while on the show. In one particularly egregious case in 2019, "Bachelorette" lead Hannah Brown for some reason chose struggling musician Jed Wyatt as her No. 1 — only for the pair to be broken up by the "After the Final Rose" segment, several weeks after fans and reporters exposed Wyatt for having a girlfriend while the show was still airing.

Sure, Jed was the villain — but he wasn't the only villain. Had the show's producers lifted a finger or performed even slightly-below-the-surface inquiry into Jed's motives for going on the show, Hannah's heartbreak and embarrassment could have been wholly avoided.

Which brings us back to "FBoy Island." While infuriating revelations about the contestants' politics could still surface on social media at any moment, so far, at least in terms of handling non-single contestants, "FBoy Island" has already done significantly better than its traditional predecessor, for a simple reason: Inquiring after and determining the real, self-admitted motives of the contestants is a central feature of the casting process of "FBoy Island."

The show looks into both contestants' and leads' dating histories and their range of experiences being or dating fboys, respectively, creator Elan Gale had told Salon. This makes sense, seeing as it's a literal dating show, and dating history can give essential insight into someone's present-day dating approach. It's shocking the "Bachelor" franchise doesn't seem to have considered this.

In the most recent episode of "FBoy Island," the three female leads are allowed to scroll through each of the remaining contestants' social media feeds. When Sarah, one of the show's leads, discovers a suspiciously recent post of her top pick, Garrett, cozying up with someone who appears to be his girlfriend, what follows is a dramatic, edge-of-your-seat FaceTime call between her, Garrett, and the other woman.

Just think of how differently Hannah Brown's "Bachelorette" season might have ended, had a producer just handed her a phone.

What are the "right reasons," actually?

"[INSERT CONTESTANT NAME] isn't here for the right reasons." How many more times will we, as a society, have to cringe through these redundant, endless cycles of scripted, staged "Bachelor" witch hunts? You, sir, are willingly on a televised reality dating show to meet someone you probably just as easily could have met at your local bar or on Hinge. Are any of you really here for the "right reasons"?

On "FBoy Island," the prototypical dating show "right reasons"-witch hunt is utterly, refreshingly cast aside, because the fact that many of them are there for the wrong reasons is acknowledged and as a feature of the show. Audience members feel relief to be able to shed their forced, long years of dating show suspension of disbelief and take what they see in "FBoy Island" as what it is.

Now, all of this momentarily brings us back to Greg, the man who wound up spurning Katie last week after she didn't reciprocate his confession of love to the extent he needed from her. That's all well and good, but he doesn't seem to realize the hypocrisy of his accusation that she was "playing the 'Bachelorette' role with me instead of just being Katie," and his claim that he "just wanted something real, at the end of the day." This is a reality show, Greg — you knew that from the start! Despite his insinuation that Katie was the fake one, the fact that Greg went into this clearly not prepared to actually fall in love speaks volumes about how "real" he was.

At the end of the day, reality TV dating shows probably weren't made to be dissected and over-analyzed to the extent that they are in this piece. Nope, they were made for fun! And there's almost nothing less fun than a reality show that takes itself seriously, and expects us to, as well. If future seasons of "The Bachelor" want to compete with the likes of "FBoy Island," they've got to get with the times.