Between "The Bachelor" finale and "The Talk," reality TV has shown us the toll of ignoring racism 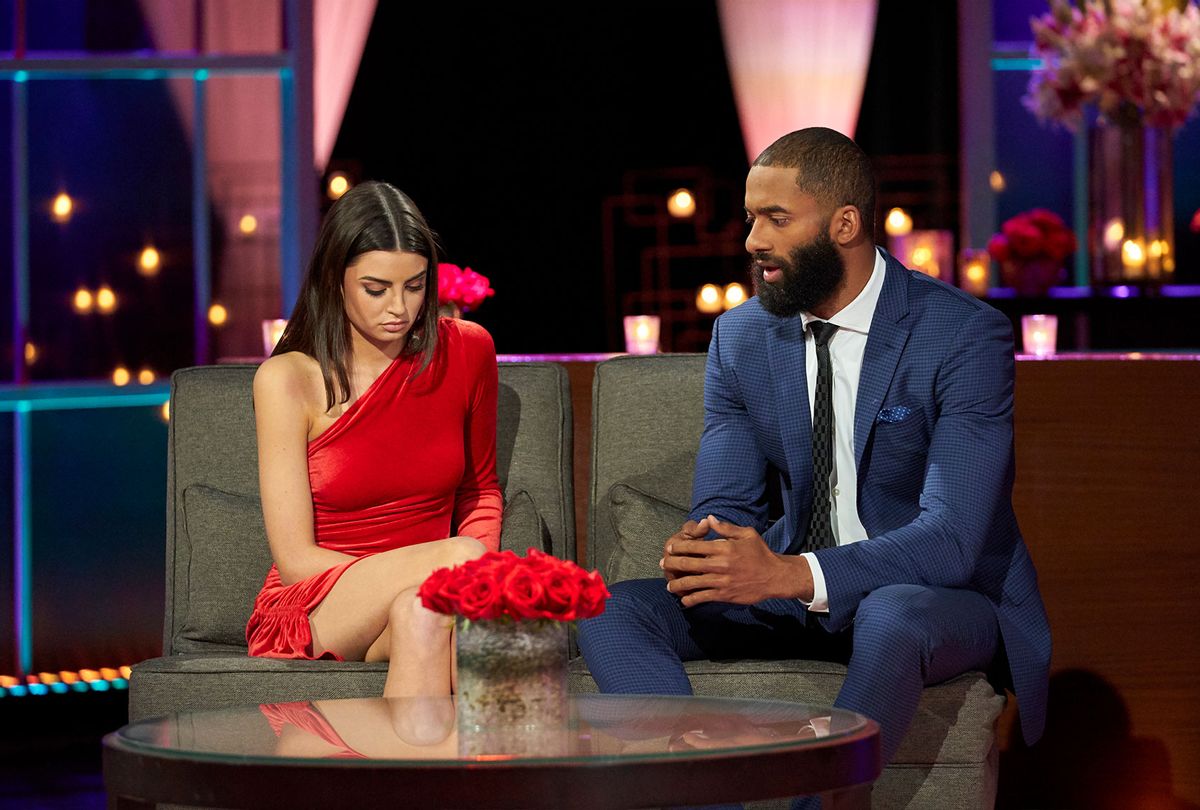 That's been March's unofficial theme since the revealing two-hour special "Oprah with Meghan and Harry" became CBS's hit of the season. The Duke and Duchess of Sussex served a heaping helping of jaw-droppers that Sunday night, but to anyone slightly aware of the Royal Family's history, Meghan Markle's revelations about their racism and emotional toxicity weren't entirely unexpected.

Distressing? Obviously. Markle's truth stung Piers Morgan deeply enough for him to accuse her of lying while using vile coded language, and for Sharon Osbourne to reassure him on Twitter, "I am with you. I stand by you."

When the public called her out for giving aid and comfort to a racist, she took out her anger on her co-worker Sheryl Underwood while the cameras were rolling on their CBS daytime show "The Talk." Alarmed at the additional negative reaction to prioritizing her tears of those of her traumatized colleagues Osbourne offered up a cover-the-bases apology to non-white people in general, but not Underwood or fellow co-host Elaine Welteroth.

And when that didn't work Osbourne did an about-face and declared that CBS set her up, around the same time new details about Osbourne's fondness for using slurs to describe her co-workers came out. Anyway, "The Talk" is currently on a hiatus that's been extended into next week.

All of this was shocking. Little of it was surprising. Once these trains leave the station they make a set of predictable stops, and every line arrives more or less on schedule. There's the racist act, and the insensitive reaction to the act, eventually leading to the perpetrator claiming to be the victim. Crazy, but that's how it goes.

"The Bachelor" finale and its accompanying controversy fits right in both thematically and socially with all this: America doesn't have official royalty to worship, but we do adore fairy tale romance in a luxurious setting. This is the first season to feature a Black Bachelor in the franchise's 25 seasons: Matt James was supposed to continue "The Bachelor"'s champagne-and-roses love story until the reality of America's lasting affair with white supremacy pierced the fantasy.

We could see this wreck coming weeks ago, when Rachael Kirkconnell, one of the last two women standing, was outed on social media for having attended an antebellum-themed "Old South" party with her sorority sisters in addition to giving a thumbs up to racist posts and costuming herself as a Native American.

Cut to Monday's "Bachelor" finale, when we arrived at brace-for-impact destination so many suspected was coming since this was shot before those revelations came to light. James selected none other than Kirkconnell to receive the coveted final rose, but did not get engaged. They declared their mutual infatuation and giggled at the prospect of having a family. It was a discomfiting crash between the blissfully ignorant recent past and the slow motion "nooooooooo" we're enduring at present.

Then it was time for an uncomfortable conversation about this hot mess, hosted by Emmanuel Acho (subbing in for longtime "Bachelor" host Chris Harrison after he mounted a stupid defense of Kirkconnell's actions excusing her racism because it was 2018). The "After the Final Rose" special following the finale is shot in the present – a present when the decision James made months ago in the romantic finale means something far different now that he knows more about the woman he picked.

No amount of pearls of wisdom from Acho were going to gussy that up regardless of his talent for smoothing our way through chats people would rather not have in his web series "Uncomfortable Conversations with a Black Man." Still, on Monday night the former NFL player ushered us through several of those within a single hour and did the job ABC expected him to do, which is to bring a considerate outsider's perspective to a production whose entrenched whiteness and insistent "racial blindness" brought James and the audience to this point.

Acho's interview wasn't without problems, mind you. He's great at offering sage observations with authority such as when he told Kirkconnell, "I've heard a definition of prejudice. Prejudice is a willful commitment to ignorance."

But then he pops out with, "I've been very intentional in saying, what you did was racially insensitive, it's racially ignorant. And it plays itself out as racism. But that doesn't necessarily classify someone as racist," which is a terrific way to provide relief to people who want to be absolved of their racism while taking extreme offense at being called a racist. (See: Sharon Osbourne.)

Acho gently steered James through a dialogue about the pressures of being the first Black person to do anything in the public eye, in his case to star in a romantic unscripted competition show meant to end in a marriage proposal in an era of cultural strife. The star's very real abashment at having fallen for a woman who at best, in his words, "might not understand what it means to be Black in America" and at worst is a white woman pursuing a Black man who doesn't realize she's racist, is unmistakable.

Then Acho voices the seemingly innocent questions "Bachelor" fans may be asking such as, if he honestly cares about her why can't he making teaching her about anti-racism part of their relationship? (Which . . . ugh.) James' short, and very wise answer is that anti-racism education is not his job.

Then Acho poses his version of Harrison's dumb argument about 2018 being "a long time" ago. "What would you say to people who imply if you broke up with her over an action from three years ago, that wasn't intended to be malicious, then you, Matt James, never really loved Rachael?" he asks.

"Know what else was a long time ago?" James asks in return, before answering his own question: "Plantations. And so I would ask those same people who are so triggered, to bring that same energy to supporting folks of color, who are asking for change. Because a lot of those conversations that are being had, are outside of people of color, and people who have never been the only person who looks like them in a room, and someone who's never been discriminated against."

Not surprisingly, he and Kirkconnell's happy ever after ended shortly after their return to the real world. When she finally comes to the stage James doesn't have much to offer other than tears and long gaps of silence. Acho asks if it is possible for them to ever reconcile, and while James professed that he was "looking forward to seeing her put in [the] work," his final answer was a quiet but firm no.

Feel free to question whether the connection between James and Kirkconnell was genuine. One truly does wonder. The anguish overflowing from that rose-and-candle-strewn stage was certifiable.

What all of these interviews and reports have in common – other than exposing white supremacy's necrotic effect on our culture – is that each takes place in a non-scripted format, and it seems from responses to online coverage that this factor rubs a few folks the wrong way. It's easy to see why that is – fictionalized tales dealing with racism are easy to brush off.

But when they turn up in the news this violate the unspoken pact we have with celebrities and TV shows to help us forget the nasty side of the social structure and everyone's part in upholding it, willingly or not.

Prince Harry and Meghan's separation from Buckingham Palace shatters the carefully manicured image of the Royal Family as morally upright and blemish-free. Osbourne committed her sins in full view of her show's audience and yet, when she tweeted her pseudo-apology on March 11 a number of her loyalists insisted she shouldn't have to apologize for anything. "[W]hat happened on Wednesday was your cohosts fault . . . that kind of discussion should never have happened on camera," offered one enlightened gentleman.

James expected to make television history for all the right reasons on a series that represents, as Acho described it to Stephen Colbert on "The Late Show, a soft-scripted depiction of "the utopian relationship in America." Instead his completely unavoidable despair turned klieg lights on the show's performative but ultimately empty promise to portray diversity, dispelling the show's illusion of perfect, "never knew love like this" passion. Again.

"I think we all have to commit both in shows like 'The Bachelor' and 'The Bachelorette' and in our society, of more accurately representing the whole, more accurately serving everyone," Acho tells Colbert. "But how do you do that? It isn't as simple as injecting a Black lead into a show . . . Who's casting? Who are your producers? Is there diversity across every board?"

Acho was asking that of "The Bachelor," but he could be saying that about any number of reality shows that have come under fire for clinging to their exclusionary casting choices or granting more camera time and therefore more central storylines to white contestants as opposed to people of color – or worse, capitalizing on racist interactions to beef up ratings.

Obvious that question also applies to "The Talk," a production that's churned through a number of non-white co-hosts, including Holly Robinson Peete, who was among the first previous "Talk" host to come forward about Osbourne's – how did Acho put it? – racial insensitivity.

The Black woman who didn't win James' heart, Michelle Young, is on deck to star in one of upcoming and back-to-back seasons of "The Bachelorette." Her edition is in the fall, with "Bachelorette" stars Tayshia Adams and Kaitlyn Bristowe co-hosting in Harrinson's stead for the 17th season, debuting this summer.

It could be that by the time Young has her turn to find The One in the show's McMansion the producers of "The Bachelorette" will have finally learned something from James' suffering and not put her through the same trials visited upon first Black "Bachelorette" Rachel Lindsay, who spent several episodes being courted by a Confederate flag-waving bigot. If they don't, nobody should be surprised, but we should remain upset enough to insist its producers better.

Season 25 of "The Bachelor" is currently streaming on Hulu.