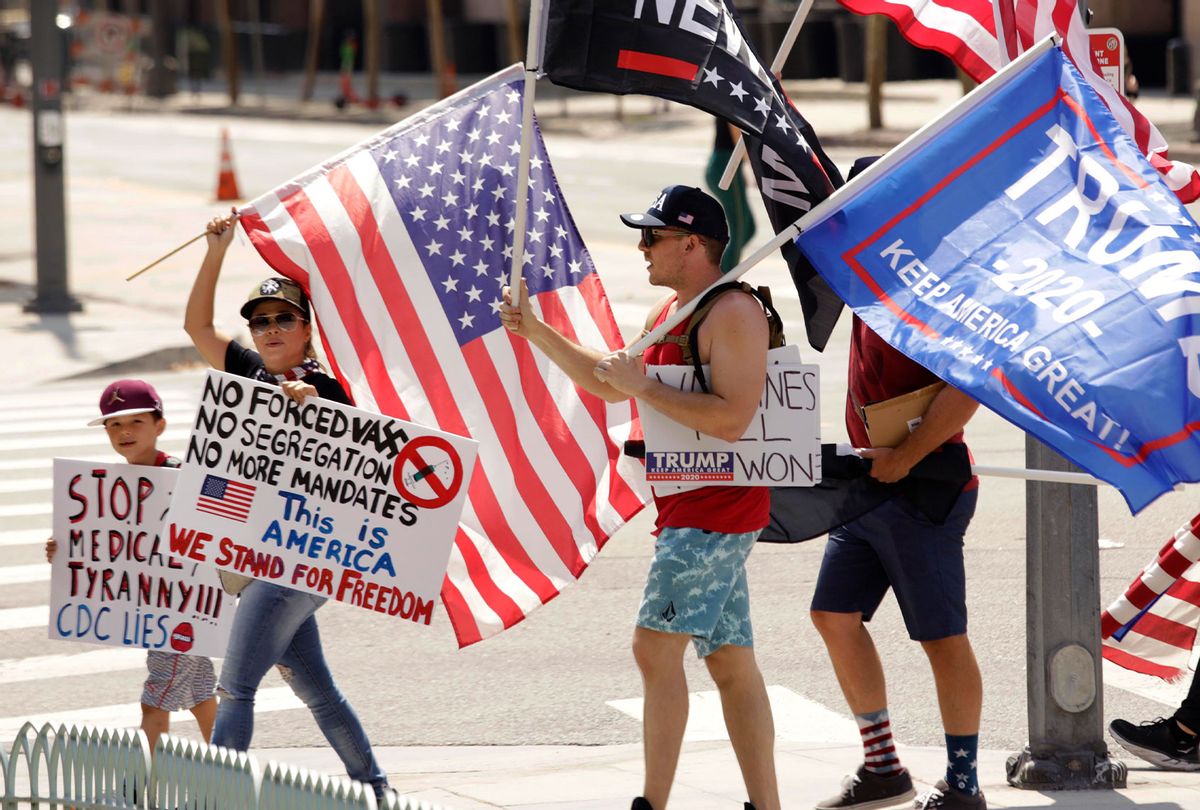 After the January 6 insurrection at the U.S Capitol, domestic terrorism experts were worried about the potential for more violence. And for good reason. The violence that day and the night before was instigated by Donald Trump and his allies were still continuing to not just push the Big Lie, but float prophetic claims about a miraculous Trump reinstatement in August. Failed prophecies can often trigger anger and more eagerness towards violence. I doubt that hope was far from Trump's mind as he continued to hype his conspiracy theories.

But as the summer wears on, it seems that at least some of the violent, fascist anger that Trump has been stoking for years is now being aimed in a new direction: people who are trying to limit the spread of COVID-19.

The anti-vaccine movement (or, as it really should be known, the pro-COVID movement ) appears to be getting increasingly nasty and violent. Worse yet, the same groups of people, specifically the Proud Boys, a right-wing group who fueled the violence in D.C., are now turning their attentions towards undermining any effort to mitigate people's risks of getting sick

The news was eclipsed by the end of the war in Afghanistan over the weekend, but on Saturday, an anti-vaccination protest in Los Angeles turned violent as anti-vaxxers physically assaulted journalists and got into brawls with the pro-vaccine demonstrators. One man was stabbed and his assailant has not yet been apprehended. Tina Desiree Berg, a left-wing journalist, was attacked by anti-maskers in a violent outburst that was captured in a photograph for the Los Angeles Times. Video footage and photographs captured the attacks on journalists:

Going through my livestream footage now. I believe this is KPCC reporter Frank Stoltze getting harassed, shoved, & kicked by Proud Boys who call him a "faggot" and a "bitch". The person who kicked him at the end started another fight shortly after w/ someone sitting in the park. pic.twitter.com/HbTC1xlAhf

KPCC reporter Frank Stolze later confirmed that "I was shoved, kicked and my eyeglasses were ripped off of my face" while covering the protest. "That's never happened in 30 yrs of reporting."

The Proud Boys are clearly focusing more of their energies on fighting any and all efforts to slow the spread of COVID-19. Since the group prides itself on a bloodthirsty affect that thrives off targeting ordinary citizens for their political beliefs — you know, classic fascist street gang stuff — that necessarily means injecting the threat of violence into the already fraught debate over measures like vaccine and mask mandates.

As Kelly Weill of The Daily Beast reported last week, before the violent clash in Los Angeles, "members of the far-right paramilitary group the Proud Boys have attended contentious school board meetings about masking in Florida and New Hampshire." It's a real-life example of outside agitators, as Weill explained on the "Fever Dreams" podcast. "I do understand the value of public meetings," but Weill added, "there should be some sort of 'I have a child in this district' threshold before you show up in a paramilitary group uniform."

The result, unsurprisingly, is things are getting uglier and violence is in the air. Across the country, school board members and people who stand up for COVID mitigation measures are being heckled, surrounded, screamed at, and threatened. On Tuesday, the superintendent of a school district in a suburb outside of Austin, TX released a statement indicating that a "parent physically assaulted a teacher by ripping a mask off her face" and another teacher had to endure being screamed at for wearing a mask by a group of parents. In Springfield, Missouri, employees at a Walmart pharmacy were targeted by a man screaming threats that they would be "executed" for vaccinating people — and the man live-streamed his own violent and disturbing behavior on Facebook. Late last month, a breast cancer patient reported being attacked with bear spray by far-right protesters who opposed COVID mitigation strategies at the local hospital.

Although he was the one who turned the refusal to take COVID-19 seriously into a culture war flashpoint, it's hard to imagine that Trump is particularly pleased with this turn of events. Trump spent the summer ginning up his supporters to focus their energies on the Big Lie by holding rallies, hyping the fake Arizona "audit," and supporting the efforts of people like MyPillow CEO Mike Lindell to keep the Trump base energized around hopes that they could "prove" Biden didn't win the election and that Trump should be "reinstated." It's classic stochastic terrorism, whereby leaders drop public hints about how someone should "do something" with hopes that their followers will pick up what they've put down.

But that violent, fascist energy that's being stoked doesn't seem to be going generally — yet anyway — towards any actions meant to reinstate Trump. Instead, people who want to stop the pandemic are getting the brunt of it, from public school officials to pharmacists to pro-vaccine demonstrators. And the situation seems to be getting angrier, with more potential for violence.

Part of the reason for this mission drift of Trump's homegrown fascist movement is a simple target selection problem. On January 6, Trump gave his base a concrete target to attack, the U.S. Capitol Building. And while there certainly is still boiling anger among the hardcore Trump base over losing the election, and a desire to lash out at the people who "stole" it from them by legally voting, the problem is a dearth of current targets to aim their ire at. Election bureaucracy is diffuse and largely invisible when there's not an election going on. Lindell can stir up fury that Trump didn't get reinstated, but his people have no idea where to target their rage.

The struggle over COVID-19, however, creates concrete targets: school boards that want to institute mask mandates, government entities requiring vaccination, people who distribute vaccines. Rep. Majorie Taylor Greene, R-Ga., for instance, has explicitly singled out vaccine volunteers as eligible targets for violent recrimination. Since "willingness to believe that COVID-19 is a real threat" has become such a reliable partisan marker, it makes a rough sense that authoritarians who want to violently lash out at their political opponents have landed on this as the proximate justification.

Indeed, there's a long history they can draw on, as the anti-abortion movement has been doing this sort of thing forever, targeting reproductive health clinics for intimidation, threats, and terrorism. What anti-choice agitators are angry about is more generalized than abortion, of course. They're angry about liberalizing sexual mores, women's liberation, rising secularism, sexual rejection, and the fact that it's increasingly hard to police your neighbors with nosiness about their sex lives. But abortion clinics give them visible targets and even a B.S. set of justifications — faux concerns about "life" — that make them feel righteous even though they are, in fact, the bad guys. Unsurprisingly, the Proud Boys are now getting into the anti-abortion racket.

The pro-COVID/anti-vaccine movement is tapping that same energy. There's something viscerally exciting, as the anti-choice movement shows, for authoritarians about using political power to rain personal ruin and ill health on your political opponents. With anti-choicers, the thrill is punishing women who have sex with forced childbirth. With anti-vaxxers, it's about continuing to stoke a pandemic, which is objectively making life miserable for liberals following safety precautions for public and personal health. Sure, it comes at the high price of making life miserable for everybody, including anti-vaccination people, but when it comes to "owning the libs," well, sacrifices must be made.

The irony of all this is that the best way to make this problem go away is to do the very thing that the anti-vaxxers hate most: Impose as many vaccine mandates as possible, in every way possible.

As long as the pandemic is raging, potentially violent fascists have easily identifiable targets. Only vaccine mandates can really get those COVID-19 numbers down and get the U.S. back to normal so the tensions can be defused. Reasoning people into the shots is not working, so the only solution is mandating them. If that doesn't happen, we can expect the violence and rage to keep rising along with COVID-19 case rates.