"Jeopardy!" fans, LeVar Burton still might not have a chance – or may not want one anymore

Mike Richards may no longer be the new "Jeopardy!" host, but he still holds power to select the next one 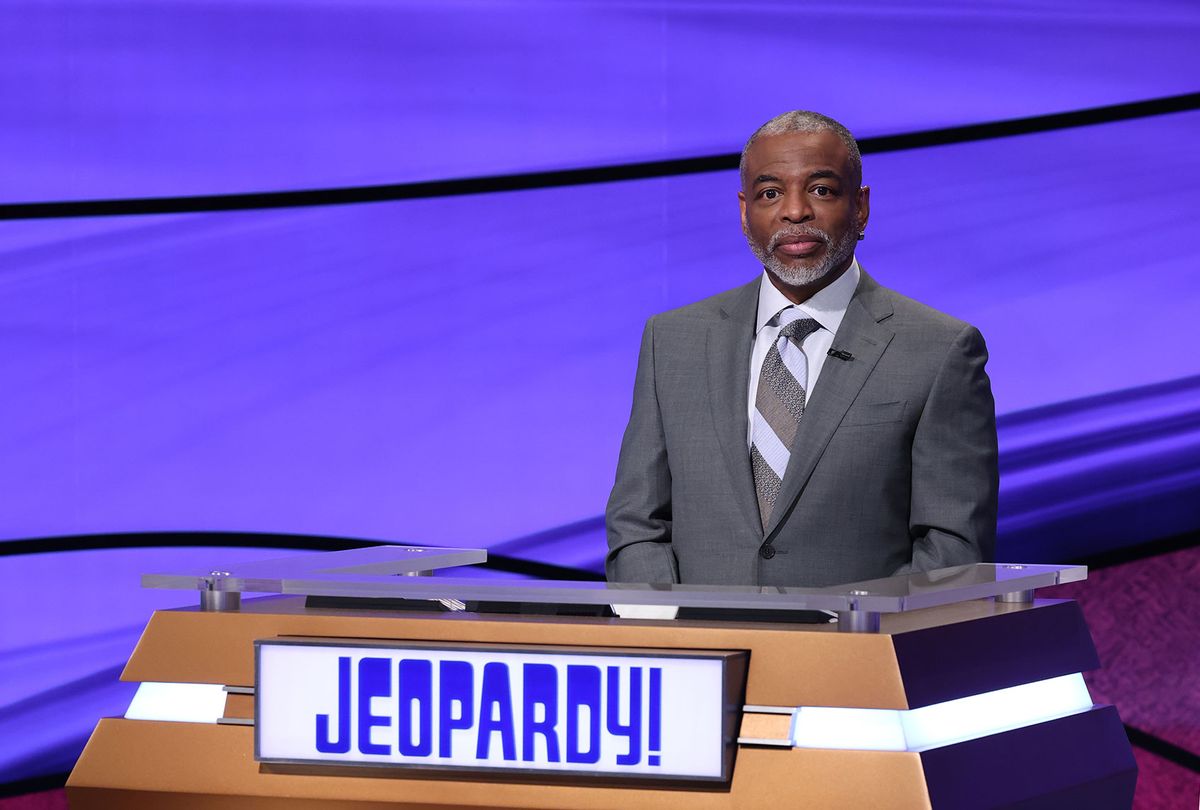 Just when we grumbled that he was in, "Jeopardy!" host for a day Mike Richards is officially out . . . but still very much present in our lives.

On Friday the "Jeopardy!" executive producer who helped conduct an extensive, months-long and like, totally serious, you guys search for a new permanent host before handing himself the job, announced his decision to relinquish it.

Richards' self-selection as the late Alex Trebek's replacement was met with widespread consternation and led to reporters digging up several gender discrimination and sexual harassment lawsuits in which he was named, filed by models for "The Price Is Right," on which he served a producer. Richards resolved to soldier on nevertheless, and "Jeopardy!" production studio Sony Pictures Television supported him.

Then The Ringer unearthed an old podcast of Richards' in which he made antisemitic, sexist, racist and fat-phobic jokes. Ignoring past legal documents is one thing. But when the public can hear the same voice that calls the hallowed categories on the "Jeopardy!" board saying in pig Latin, "Ix-nay on the ose-nay . . . She's not an ew-Jay" while referring to someone's large nose, that's a jackass of a different color. That brought the Anti-Defamation League all up in the show's business.

There was only one thing Richards could do, albeit halfway. He quit the hosting gig. As of Friday, he was still the show's executive producer.

"I want to apologize to each of you for the unwanted negative attention that has come to 'Jeopardy!' over the last few weeks and for the confusion and delays this is now causing," Richards kinda sorta-mea culpa'd in an official statement. "I know I have a lot of work to do to regain your trust and confidence."

The statement added that Sony Pictures Television intends to resume the search for a permanent syndicated host, bringing back guest hosts to continue production for the new season. Richards filmed one week's worth of episodes, which will air.

At any rate, there was great joy on the socials. With loud shrieks written in all caps, unclean spirits tweeted their way out of those who were possessed. Many of the paralyzed and lame on OnlyFans were healed.

It may seem that with Richards exiled from the podium, Sony could reconsider how badly they botched this transition from a public perception point of view. By making those initial guest host "tryouts" a show without no real purpose or weight behind most of them raised the profile of a show most people watch only occasionally.

Now, theoretically, they get a second shot to repair this mess.

Along those lines, people immediately resumed campaigning for internet favorite LeVar Burton to get a second shot, given less-than-ideal circumstances surrounding his one and only tryout date. ("Jeopardy!" shoots five shows in a single day, you see. Most of the guest hosts received the benefit of two dates; Burton and the contenders who came after him, as well as Robin Roberts, only received one.)

That would be splendid, right? Actually, no, and not just because it's probably not going to happen. Indeed, it shouldn't happen.

No offense to Burton, by the way. Despite his guest host slip-ups and shaky performance, he'd still be wonderful at the "Jeopardy!" helm. If Sony execs wanted him, they'd give him all the coaching he would need to succeed. He's an award-winning actor, after all. Of course he can do this.

But Sony never wanted Burton. They never wanted Robin Roberts, either. The late Alex Trebek mentioned CNN legal analyst Laura Coates as one of his two choices to succeed him. You'll notice that she never made any of Sony's lists, either. A likely excuse, if they even knew about Coates, let alone considered her, is that producers might have suspected that too many people would say to themselves, "Who is Laura Coates?"

But when the nation collectively asked that about Mike Richards, they had plenty of faith that we'd eventually find out. They were right! We did.

My guess is they never wanted a person of color. They barely wanted a woman. Mayim Bialik may have clinched the primetime and specials hosting gig – which, according to Newsweek, also upset some fans – but from the time that was announced it seemed like a consolation hire.

This is said with full acknowledgment that Bialik gave a splendid guest host performance. But given the fact that she was one of four women out of a list of 16, and the other three are newscasters, it was obvious what Sony wanted and for the time being, still wants: another white guy.

If that weren't true, Richards wouldn't still be serving as executive producer of "Jeopardy!" with Sony's blessing, backed by their Sen. Susan Collins-flavored assurance that he's learned his lesson. "Mike has been with us for the last two years and has led the 'Jeopardy!' team through the most challenging time the show has ever experienced," its official statement reads. "It is our hope that as EP he will continue to do so with professionalism and respect."

But if you were a woman or a person of color, would you take that on faith? Would you trust your job to the guy who originally wanted it, had it, and then was forced to give it up due to bad press?

Too many cautionary tales are floating around in the entertainment industry – or, heck, on Glassdoor or Reddit – about how such scenarios doomed the suckers invited to such Elysian Fields only to be presented with a cliff.

In fact, a subplot in Netflix's new limited series "The Chair"  tells one such story. In it, a patriarchal white dean makes a show of ceding a prestigious position to a woman of color while ensuring she never has real decision-making power or a prayer of succeeding at her job.

Obligatory spoiler warning: if you haven't watched this show, stop reading right now and go watch. It's only around three hours long and worth your time.  If you keep reading a rather significant but highly relevant surprise will be blown for you.

In "The Chair"  Sandra Oh plays Dr. Ji-Yoon Kim, the first woman to chair the English department at her University. Paul Larson (David Morse), who is her boss and the school's dean, loves to show her off at hoity-toity events. Behind the scenes he thwarts her efforts to gain tenure for a popular Black professor, Yasmin McKay (Nana Mensah). Ji-Yoon's warns him that Yaz is in high demand in their field, but the dean simply doesn't care.

Granted, Ji-Yoon makes a few significant mistakes in an effort to enact diplomacy, including imposing an overtly envious older professor Elliot Rentz (Bob Balaban) upon Yaz in order to boost his ailing class registration numbers. Ji-Yoon does this as a favor to Elliot, expecting him to give Yaz a glowing recommendation. Instead, he drags down Yaz's lectures and harpoons her performance in his evaluation.

None of this compares to Dean Larson's final insult to Yaz's skills and intelligence. To ease the sting of Elliot stealing Yaz's shine, Ji-Yoon names her as the college's Distinguished Lecturer. Dean Larson casually snatches away the honor at the behest of a major benefactor – an elderly white woman who merrily announces that she's found a more suitable choice for Distinguished Lecturer while she was out shopping.

And it is none other than . . . David Duchovny.

Yes, the actor is playing himself. Duchovny actually is a best-selling author. He also meets Ji-Yoon in his swimming trunks and generally comes off as a self-important boob. The "X-Files" star views his casual sojourn into academia as being on par with touring the country with his rock band or filming a movie. He proposes dusting off a paper he never defended and handing it in so he can finally get that doctorate he never got around to completing, as if he were filling out a credit card form.

Ji-Yoon is appalled. Dean Larson is unmoved. And although the chair finds a way to ameliorate the situation, her relationship with Yaz is damaged beyond repair. All because at an important crossroads, a patriarchal institution decided that the feelings of a couple of status quo white people were of greater worth than one woman of color's potential and abilities, to the point of negating another woman of color's political power.

So yeah: About that whole business of Richards keeping his executive producer bag. It's not a great situation into which any outsider should willingly enter. Certainly not a non-white person. Even alternate frontrunner "Jeopardy!" GOAT Ken Jennings and fellow champion Buzzy Cohen should be wary. But if a few industry insider predictions prove to be accurate, Richards' executive producer title may also be, shall we say, in a transitional phase.

That said, the American public has a habit of forgetting what men behind the camera did and may continue to do without millions of eyes on them, especially after the headlines die down. Joining Richards' clubhouse may be simpler for Jennings and Cohen, and choosing one of them or someone like them may be sufficient for Sony to keep "Jeopardy!" chugging along and bring its elderly-skewing audience with it.

Meanwhile, somewhere out there is a smart producer who may see what "Jeopardy!" didn't in Burton or Coates or someone else denied a fair shake by Richards and executives like him. Imagine what could be possible if that person were to create a general knowledge competition built to attract a modern, intellectually curious viewership while casting an eye toward the future.

That's a story I hope someone is bold enough to write with someone like Burton, Roberts or Coates steering it. But it won't find an audience within an unnecessarily bruised institution too stubborn to part ways with the "team player" who damaged it.