How “The Chair” needs to do better by Sandra Oh 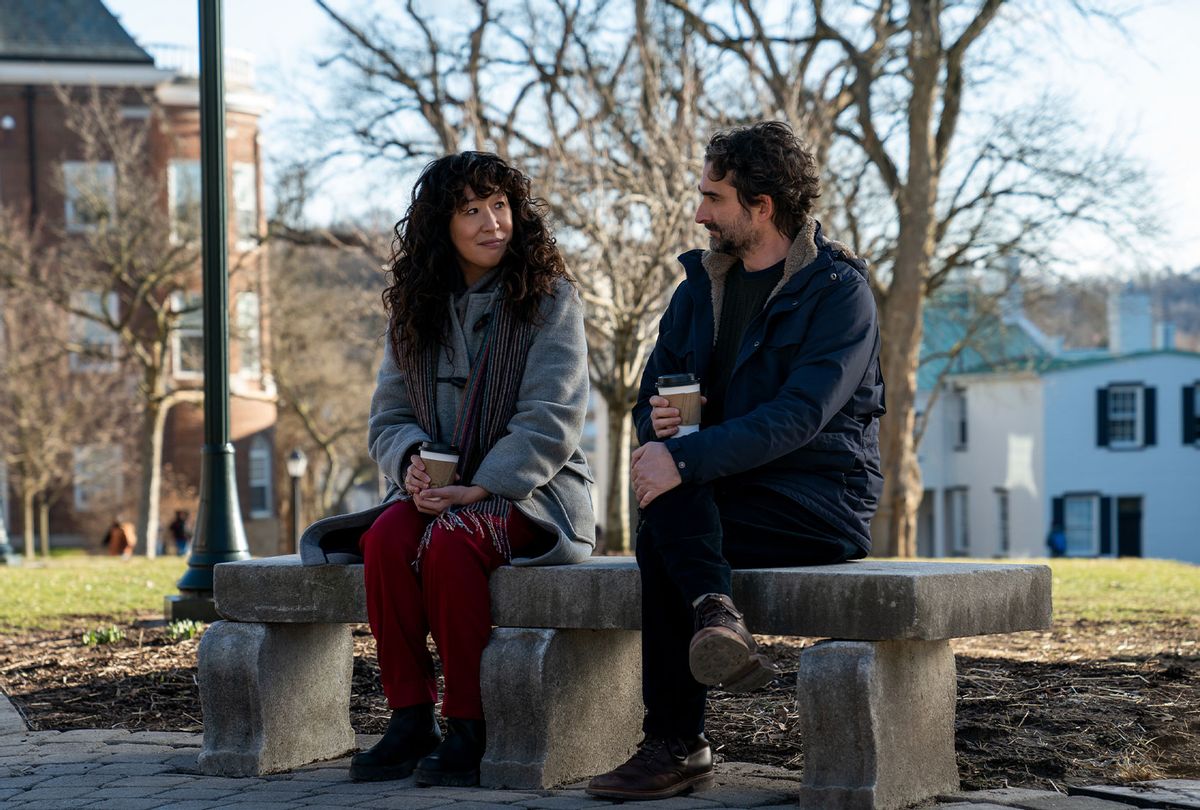 Sandra Oh as ﻿Dr. Ji-Yoon Kim and ﻿Jay Duplass as Bill Dobson in "The Chair" (Netflix)
--

The following contains spoilers from "The Chair," including its finale.

By now Sandra Oh's hive of devoted fans have likely binged all six episodes of her new Netflix dramedy, "The Chair." As Dr. Ji-Yoon Kim, the newly appointed chair of the English department of a small liberal arts school called Pembroke, Oh's meteoric rise comes at a time of scandal and uncertainty for her department, and it doesn't help that she's a woman of color subject to the racism and misogyny inherent to academia.

"The Chair" has a lot going for it — namely, Oh's presence, but also smart commentary and realism on the pressing issues facing American universities today. Still, there's one pretty big problem that makes the show difficult to enjoy for audiences who wanted to see a story about a woman like Dr. Kim overcome barriers and rise to the occasion. That problem is Pembroke English professor ​​Bill Dobson (Jay Duplass).

Duplass is charming as ever in "The Chair," but there's nothing more frustrating than seeking out a show for fresh storytelling that centers the experience of a marginalized person and instead being hit with a storyline focused on a bumbling, white male doofus. There's many a pressing issue Dr. Kim faces as chair of an under-enrolled English department, but she's instead forced to clean up mess after mess created by a drunken, reckless and politically insensitive Dobson.

Audiences of "The Chair" can certainly sympathize with Dobson, who recently lost his wife and seems to have a strained relationship with his young adult daughter. The problem, however, isn't that he's sympathetic — it's that too much energy and airtime are given to make us sympathize with yet another white man who can't seem to get his act together, and makes this everyone else's problem.

Sprawled across the show's six, roughly 20 minute episodes are scenes of Dobson showing up late to classes, performing a Nazi salute as part of a tasteless joke, and refusing to apologize to students who confront him, interspersed with charming sequences of him being a wonderful babysitter to Dr. Kim's young daughter JuJu (Everly Carganilla).

"The Chair" unfortunately isn't the first case of an interesting female character, character of color, or otherwise marginalized character being pushed to the side for a white man's redemption arc, or some long-winded, flashback storytelling into why an awful white guy is awful (spoiler alert: it's never actually his fault). The unsolicited white male rehabilitation storyline is a fixture in nearly every genre of story, and frustrating as it may be, it's not always a pain to watch.

In "Game of Thrones," aside from some woefully disappointing writing choices for resident bad boy Jaime Lannister (Nikolaj Coster-Waldau), Jaime's growth into a semi-reformed anti-hero after being cut down from his hubris is interesting and enjoyable — and it would have been impossible without the companionship of an even more interesting character like Brienne of Tarth (Gwendoline Christie). One has to wonder what more we could have seen or learned about Brienne, had her character received the same care and focus as Jamie's.

In a similar vein, HBO Max's subversive hit "The White Lotus" has been widely celebrated for its astute criticism of white economic privilege and the problematic nature of the tourism industry in regions that have been subject to white western colonization. But it's also been criticized for its focus on the perspectives and experiences of rich white people and the cruel fates of its characters of color and exploited workers, who all but disappear by the end of the series. The substantial screentime of the show's privileged characters hardly glorifies them, but it's also screentime, focus and perspective that are taken away from the vastly more interesting characters of color.

"The Chair" is obviously a very different show from the likes of "Game of Thrones" or "The White Lotus," but it emulates this same energy in making Professor Dobson's flaws, struggles and redeeming qualities central to its story. This artistic decision-making is just bizarre, since the show seems much better suited as a story of a woman of color taking on the whiteness, maleness and elitism of the university.

"The Chair" is at its most interesting when Dr. Kim is pushing back on microaggressions and micromanagement, and confronting an elitist system that refuses to change. Insights into her character through interactions with her blunt relatives are also highlights. In contrast, the show is at its most tired and predictable when it shifts to focus on Dobson's magical babysitting abilities or his generic speeches about his free speech rights as a white, male professor, which feel stripped from a baby boomer's letter to the editor in a local paper. Just as cringe is how Dobson launches into his self-righteous critique of cancel culture as if this is the problem with campus free speech in America, and not the routine, targeted harassment and doxing of politically active students of color, or censorship of critical race theory in the classroom.

This first season of "The Chair" is frustrating to watch because of its undeniable potential, squandered on its overkill efforts to make yet another disgruntled white man likable, or at least tolerable and sympathetic. Some may argue that this is the point, that the show reflects the depressing and frustrating reality we face: white and privileged people are awful but inevitably end up winning – as we've seen in "The White Lotus" and "Succession." But other than observing the state of the world, what then? What is the value that this series provides as thoughtful commentary or entertainment?

On the bright side, the solution to fix "The Chair" is relatively simple, if Netflix sees fit to continue Dr. Kim's story after it effectively set her back to her pre-Chair status, a little bruised but not broken. That is, the show should simply focus less on the laborious task of trying to rehabilitate another boring, problematic white man, and dig deeper into the exponentially more interesting experience of characters like Dr. Kim.

What's life like for her, now that she's stepped down as chair? What challenges does she face in returning to her focus on teaching? How is her relationship with her precocious daughter JuJu going? Who are some of her young, passionate students fighting for change on campus? Could her aborted relationship with her ex – played by the decidedly un-crumpled Daniel Dae Kim – be revived? All of these questions seem like infinitely more interesting avenues of exploration for "The Chair" than a moment more of Dobson trying to explain away his offensive Nazi joke.

Hopefully, "The Chair" will be renewed for a second season, and have the chance to course correct and devote more focus to deserving characters and storylines. The Netflix dramedy has the potential to contribute something new to storytelling about university life, and possibly even be great. After all, there's no sinking ship Sandra Oh can't save.