An look into why YA loves this tale of transformation under the tutelage of another, and the lie inherent within 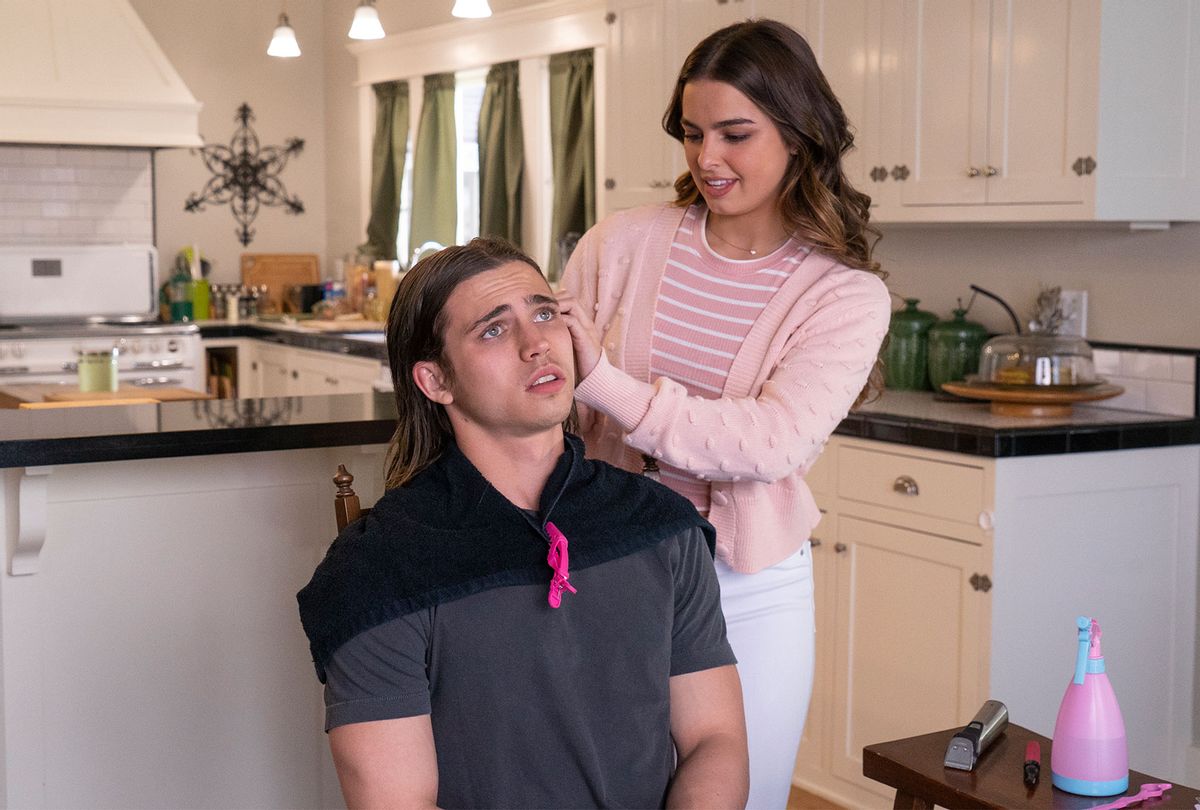 Tanner Buchanan and Addison Rae in "He's All That" (Netflix)
--

Netflix's delightfully inane teen rom-com "He's All That" may be a gender-flipped remake of the 1999 hit "She's All That," but the messaging is the same, for better or for worse.

In the update, real-life TikTok dancer and social media influencer Addison Rae makes her onscreen acting debut as Padgett Sawyer, a Los Angeles-area high schooler and beauty influencer who loses followers and sponsorships after fans witness her perfect life implode in real time. To win back her audience and gain cachet with ultra rich friends, Padgett takes on the challenge to secretly befriend and then make over the most challenging project she can find: Cameron Kweller (Tanner Buchanan of "Cobra Kai").

The brooding misanthrope couldn't be further from being prom king. Not only does Cameron like taking photographs with actual film, he also dresses as if enjoying crisp Seattle weather even though he lives in sunny LA. But a "Great Gatsby"-themed birthday party, "Street Fighter"-style rumble, a Kardashian appearance and epic dance battle later, and those two crazy kids achieve a FOMO-inducing level of fun together. The makeover is also successful inasmuch as Cameron's newly groomed persona is embraced, and affection blossoms through this experience.

Love is great and all, but is this story of guided transformation a healthy message to promote?

As noted before, "He's All That" is not the first teen rom-com to dip into this well. "She's All That" spun the fixer-upper fairy tale for millennials to great success, and its film's stars Rachael Leigh Cook and Matthew Lillard even make appearances in the update. In fact, for every generation, there is such a story. One era's "He's All That" is another's "Can't Buy Me Love," "Pretty Woman" or "The Princess Diaries." Or it's "My Fair Lady" with your choice of Audrey Hepburn or Julie Andrews (or a myriad of others like Karen Gillan).

Of course, all of these are Pygmalion stories, based on or loosely inspired by George Bernard Shaw's 1913 play of the same name about a professor of phonetics who attempts to educate a poor flower vendor. And in turn that has its roots in Greek mythology based on narrative poem.

It's clear that this tale of glowing up under the direction of another has endured for centuries in one form or another. But why does it work so particularly well in teen programming?

"So many love stories for women were always about this man who would, in fact, be a mentor to you," says Gina Fattore, a screenwriter whose resume is heavy on televised teen dramas like "Dawson's Creek" and "Gilmore Girls." She recently created the USA Network adaptation of Megan Abbott's cheerleader-set suspense thriller "Dare Me."

Although Fattore has never worked with this trope in her own writing, she couldn't escape its underlying messaging about self-worth and relationship dynamics.

"This idea that love is something that fundamentally changes you is baked into all of our conversations," she says. "Heterosexual relationships are about how you have to change this man. You have to change him into, basically an adult. So essentially, meaning you have to mother him."

Also, it doesn't matter whether it's a beauty blogger trying to hold onto her sponsorships or a rich guy who picks up a prostitute with a heart of gold on Hollywood Boulevard.

"The trope is popular because it holds out the idea that social hierarchies – of gender, class and race, for example -– are changeable," says Leila Neti, an English professor specializing in 19th and 20th century British literature at Los Angeles' Occidental College. She says they bestow the notion that "with the help of the right people, anyone can transcend social limitations."

This concept, especially in the hands of a heteronormative romance, is a double-edge sword however.

"When we dig a little deeper, though, we see that the transformation always works in one direction," Neti says. "Whether in 'My Fair Lady,' 'Pretty Woman,' or more recent versions of this story, social hierarchies are cemented, rather than challenged, because these narratives tend to affirm the value of the socially dominant position."

She says that this narrative can be particularly problematic when shown to impressionable audiences because it "channels teen desires toward normative ends, encouraging young women to identify with, and value, dominant ideals of beauty, as well as [male] wealth, power, and privilege . . .  Ultimately, it furthers conventional ideas that don't speak to the feminist aspirations of the contemporary era."

Yet, "He's All That" is premiering at a time when teen programming is going through a sort of renaissance. They've become more inclusive, both ethnically and in regards to LGBTQ+ awareness, and are having more frank discussions of sex and consent.

"The world is becoming less heteronormative at every turn, which is great because young people are leading the charge in all those areas," says Fattore. "The old standards for the stories are not working for them."

Therefore, it makes sense that the makeover trope is also part of the conversation and being scrutinized. In an episode of HBO Max's new iteration of "Gossip Girl," the popular and scheming Luna La (Zión Moreno) offers to "Pygmalion" new outsider Zoya (Whitney Peak) – but, she stresses, "I don't mean a feminized transformation in order to please a cis man. I'm talking elevating your taste level so that no one calls you Zugly again." Cue a montage of her tutelage.

At the end of "He's All That," Padgett comes clean about her own contributions to societal standards of perfection while Cameron loosens up a bit and still keeps his new hair and clothes. It's a toddler's step in the right direction.

But, as Neti notes, "The Pygmalion trope originates in Greek mythology in which a sculptor falls in love with the statue he creates. So there is also a kind of narcissism in the concept, in the sense that the creator is falling in love with a version of themselves." This is the male gaze made corporeal.

"That's also why, even though the trope seems to be about change, it is really about keeping things the same; what you really are falling in love with is a version of yourself, not someone different," she adds. "Changing the sex or gender of either of the main characters doesn't change the fact that the storyline usually works to preserve social norms and the status quo."

"He's All That" is now streaming on Netflix.