In this era of reboots, this one is particularly unoriginal and unnecessary, even with its inclusive updates 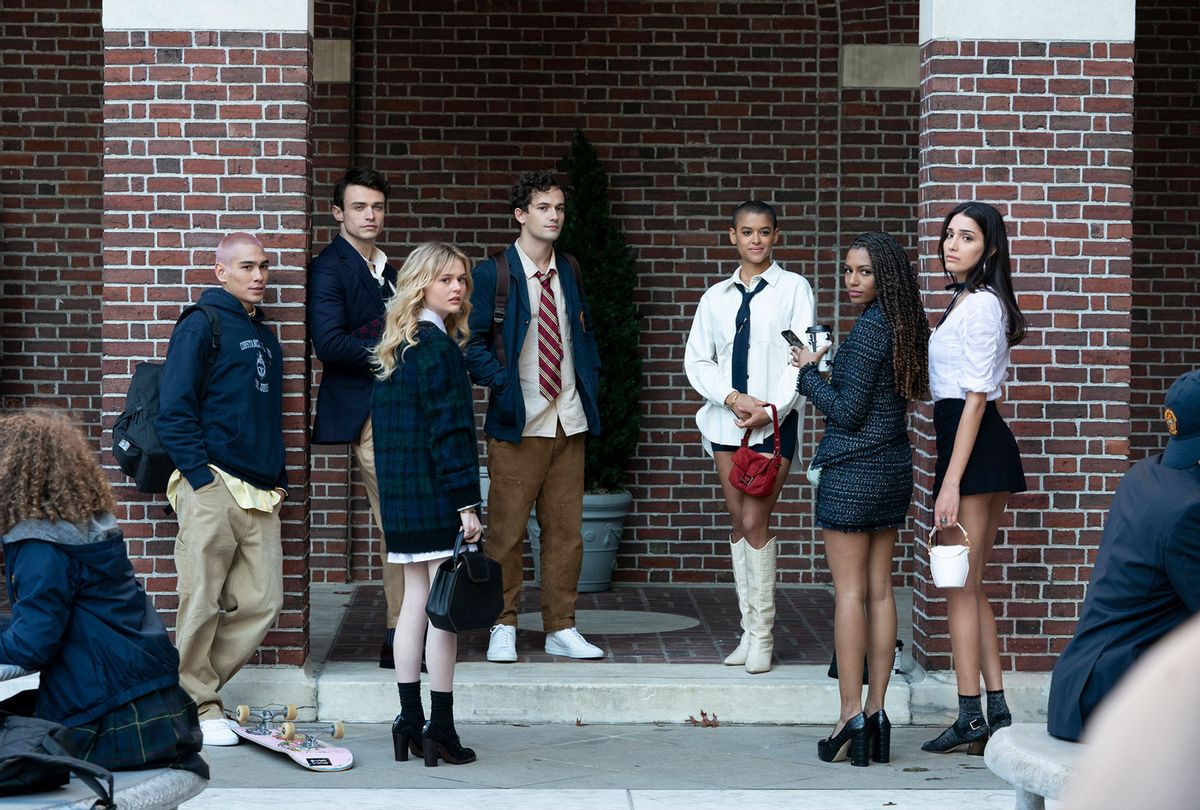 Nobody watches a soap opera and marvels aloud afterward about the way it, you know, really makes you think. We plug into them to do the opposite, which is to turn off our brains and surrender to frivolous stories of the rich and glamorous hobnobbing with sexy poors. We covet and coo about the fashions and the jewelry while ironing and folding our off-the-rack work wear; we drool over displays of six-pack abs and superhuman glutes showcased poolside or bedside.

The original "Gossip Girl" made all of this into an artform at the height of its powers, otherwise known as the 2007-2008 TV season. Despite the exasperatingly uneven quality of the writing, the characters consistently reminded us of their humanity and emotional frailty, persuading us to overlook their sins every few beats. Its finest moments were propelled by its heart, the main organ that HBO Max's "Gossip Girl" revival is missing.

More of an unnecessary continuation than a refreshing renovation, the 2021 return could have thoughtfully ushered the heady world introduced in Cecily von Ziegesar's YA novels and the CW's primetime lineup into our new age. Instead the very qualities that should be selling points, namely its inclusive casting and overt queerness, are by and large cosmetic.

Back when texting and blogging blind items were the primary tech vices of the day, the first "Gossip Girl" guided us through a version of New York most of us could never afford. It also took up where "Sex and the City" left off by spicing prime time with some of the sharpest dialogue on TV, pressed into the mouths of high school students stalking the halls of the elite Constance Billard School for Girls and its brother school, the St. Jude's School for Boys.

But the original was far from flawless, don't forget. Among other things that may not have passed muster today, Chuck Bass was established as a "bad boy" in part by sexually assaulting two women in the pilot, and he wound up being one of the show's most beloved characters.

Another shortcoming announces itself in the original series' poster with yet another all-white core cast acting out a story set in one of the most diverse cities on the planet. In that sense the old "Gossip Girl" was simply carrying on a tradition established by "Friends" and "Sex and the City" and other shows on The CW that weren't "Veronica Mars."

The new "Gossip Girl" corrects that part straightaway by making a pair of Black women the modern equivalent of Blair and Serena, and half-sisters at that. One of them, Julien (Jordan Alexander) is a wealthy 16-year-old Instagram influencer perched on the top rung of the Constance St. Jude's social ladder, carefully attended by her pals and image supervisors Luna La (Zión Moreno) and Monet (Savannah Lee Smith).

The other, Zoya (Whitney Peak), is a 14-year-old freshman who is newly arrived, on an arts scholarship, and friendless.

Julien and Zoya were kept apart by their fathers for a very-good-for-dramatic-purposes reason – their shared mother abandoned Julien and her extremely rich and influential white dad for Zoya's middle class Black father. The two men hate each other, but the sisters secretly decide they shouldn't, even though Julien's very exclusionary clique would rather have their Queen Bee on the attack.

As horribly as these children of high society treat peers they deem to be lesser, they hold their teachers in even lower regard. Faculty like Kate Keller (Tavi Gevinson) are forced to put up with it or risk being fired and blackballed in their profession. This topsy-turvy power structure scares these adults, but it also makes them resentful, leading Kate to a brash decision.

In the original series, the identity of the all-seeing entity known as Gossip Girl (and voiced then and now by Kristen Bell) remained a secret until the end of the series. The reboot opts to establish the party behind the pseudonym's resurrection right away, a clever choice until the conceit become too farfetched to buy.

Better stories have been built around less, which gives this "Gossip Girl" even less of an excuse for failure. Once you abandon the willingness to embrace some level of implausibility, which happens from the moment Julien and Zoya enact the older sibling's clumsy plan to assimilate into the school's upper crust, it's pretty much all over.

But on a more essential level, the reboot dooms itself by placing non-white characters in clones of roles originated by a white cast and expecting viewers not to notice. This robs them of the opportunity to create truly original personalities for the show and ensures they'll be walking similar loops to their predecessors – circles that eventually bored the audience.

Julien is the Blair, of course, making Zoya Serena's equivalent. The circle expands predictably from there: Julien's boyfriend Obie (Eli Brown) is a mad scientist's project that crosses earnest writer Dan's DNA with that of forlorn rich boy Nate, and since he's dating one sister he's destined to drive a wedge between them.  Julien's closest confidante Audrey (Emily Alyn Lind) merges Blair with Jenny Humprey's innocence and gives her a devoted boyfriend in Aki (Evan Mock), who acts as a sounding board for the group's charming version of the predatory Chuck Bass named, no joke, Max Wolfe (Thomas Doherty).

Aside from wearing a moniker ripped straight out of a parody name generator, Doherty's character more closely emulates to the sexually omnivorous version of Chuck Bass presented in the books, and his charisma carries every scene he's in. Nevertheless, not even he can salvage some exceptionally dreadful writing and plot choices.

Showrunner Joshua Safran worked on the first "Gossip Girl," which should lend additional legitimacy to this new version instead of providing plausible theories as to why it rehashes threadbare twists from any number teen primetime soap classics. No joke, if you've watched any part of "Beverly Hills, 90210" or its inferior reboot, or "The O.C.", or "Pretty Little Liars," you can accurately map where every single crumb dropped in the pilot leads, which would be fine if the scenery flanking that path were interesting.

But Safran quickly proves he can't outrun a problem created by the show's topmost innovation, in that he and the writers craft this "Gossip Girl" narrative around a pair of Black women without writing anything acknowledging their Blackness. That the actors in question happen to be light-skinned only makes the optics worse at a time when Hollywood's casting producers are contending with accusations of colorism. To be clear, Alexander and Peak turn in able performances with what they're given, including navigating a wreck of a subplot that involves a corny, shallow revelation about bullying. They're also the non-white characters with the most lines in the show. The only other Black peer in their social orbit is Monet, a minimally developed mean girl on the outskirts of the action.

Referring back to my original assertion, I still hold that soaps don't exist to make profound statements about racial injustice or any serious cultural or social ills, but that doesn't mean treating your characters of color as raceless or the audience as color-blind. And that problem extends beyond the two siblings. Oble, for instance, is announced as one of the "guilty rich" due to his work with underprivileged kids, which could lead to some eye-opening conversations about savior complexes and class guilt without abandoning the flashiness that made previous primetime soaps such glitzy dopamine hits. Max's sexuality is a handy distraction and temptation for other characters who may be bored and newly curious about their own sexual identities. It also comes across as the storytelling equivalent of a hot plate, a device to heat up situations rather than a natural extension of circumstances.

But this "Gossip Girl" lacks the conviction to do any of that, leaning heavily on look instead of substance. A brouhaha at a fashion show culminates in a theatrical conflagration made for being caught on iPhone cameras, which is exactly what happens. Characters who shouldn't be seen together get caught in a rainstorm and handily change out of their wet clothes in front of a gigantic window. Everything in this show is about as subtle as an anvil dropping from a 30,000 feet in the air.

In some ways that's apropos of Gossip Girl's new medium, Instagram. Placing Gevinson, a child prodigy of the fashion world turned actor and influencer herself, in the role of navigating the stressors of social media is the show's smartest move; if any performer deserves a broader choice of roles after this, it is her.

But she is a lone original voice in a choir of cover artists wearing more current fashions but behaving in all the same ways the rich, famous alumni that carved the path of ahead of them did. It just goes to show that no matter what decade we're in, some types of people never change – but to keep TV audiences interested, some stories really should. Even the sudsier ones.