Viewers of a certain vintage may come to see Steve Martin and Martin Short, but Selena Gomez makes this comedy sing 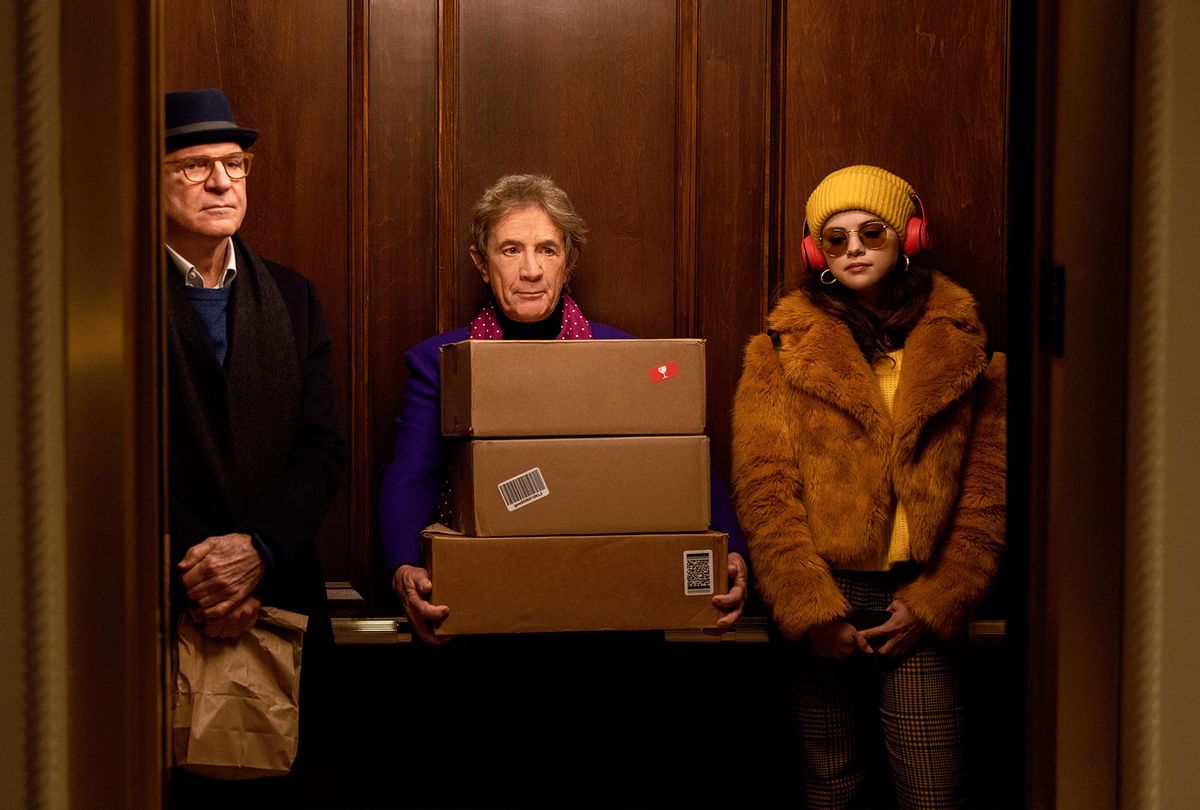 Steve Martin, Martin Short and Selena Gomez in "Only Murders in the Building" (Hulu)
--

Decades will pass before people know whether this pandemic produced a masterpiece on par with William Shakespeare's finest. But in the short term one can certainly say Selena Gomez has used the time well.

It's not as if life was terrible for the pop star before. But when sheltering in place made TV more central to our lives, Gomez was among the first to harness the mood and her celebrity into an approachable cooking series, "Selena + Chef," that invited people into her kitchen.

That was merely an amuse bouche gleaning entertainment from her marginal cooking skills. Hulu's 10-episode murder mystery "Only Murders in the Building" capitalizes on her strength and dramatic versatility, placing her on equal billing with comedy legends Steve Martin and Martin Short – and better still, equal footing.

Martin and Short share a concord built over decades' worth of performances, including 2018's Emmy-nominated Netflix special "An Evening You Will Forget For The Rest Of Your Life." They've developed a reliable cadence over the years to the point that it's impossible not to see something of each man in the characters they play, including their "Only Murders" reluctant friends Oliver Putnam (Short) and Charles Haden Savage (Martin).

Few newcomers could easily insinuate themselves into such a classic partnership, let alone match their combined energy signature. And yet where other actors might have come off as a smaller third wheel next to Martin's bursts of lunacy and Short's controlled absurdity, Gomez is the stabilizing force that makes this unlikely crime-solving trio work.

Gomez's Mabel is a mystery unto herself as well as a recent addition to the Arconia, a classic apartment building situated in New York's Upper West Side. Home to an assortment of characters ranging from an anonymous cat enthusiast to, improbably enough, Sting, the residence is the sort of aspirational piece of Manhattan real estate that has a waiting list to get in. It's a close community in the sense that people share walls and overhear each other's business, forming fierce opinions about their neighbors without truly knowing one another.

Charles and Oliver have lived there for decades. When he was in his prime, Charles enjoyed a marginal amount of fame as Brazzos, the sort of 1990s-era TV detective given to overly detailed monologues that went the way of David Caruso's popularity. Now he's a quiet grump who keeps to himself.

Oliver, a Broadway producer whose career is largely behind him, is the opposite – a chatty, peacocking diva who assures anyone who will listen his next hee-yooge smash is just around the corner. The closest thing he had to a hit was a disastrous adaptation of "Splash: The Musical," so a career revival probably isn't in the cards. When he runs into Charles in the elevator the two signal a mild loathing for each other. Mabel ignores both.

Then a fire alarm empties the building and brings them together over the campfire of their common obsession: a popular true crime podcast. That alone wouldn't be enough to cement a friendship from thin air, of course. Only a neighbor's strange death achieves that. The cops expediently rule it a suicide, but none of them buys that. So the three of them embark upon their own investigation, chronicling their findings in their own true crime audio series.

Martin co-created "Only Murders in the Building" with "Grace and Frankie" producer John Hoffman, a provenance that explains some of the stylistic curios incorporated into the story. The performer has a way of taking elements that would seem simply weird on their own and combining them with other set pieces to lend an emotional sparkle to what would otherwise be very ordinary moments.

For instance, Charles plays the concertina. In a world partly made by a man who directed, wrote and produced a documentary about the history of the theremin, this is entirely believable. Viewers unfamiliar with Martin's odd hobbies may share Oliver and Mabel's opinion that Charles' instrumental contribution is a little much.

But when Charles becomes smitten with Jan (Amy Ryan), a bassoonist who lives in the building, his instrument makes sense. The concertina's otherworldly keening pairs magnificently with the bassoon's loamy baritone register. Constructing their inevitable courtship around such a duet feels like a very New York moment – absolutely romantic and melancholy all at once. Within the enclosed universe of a majestic building struggling against the years of dust baked into its patina, such interludes feel natural.

Besides, "Only Murders in the Building" works because it embraces such entrancing details, but even more so because its creators recognize what grants any piece of art the potential to become classic: it's in the marriage of old and new. People who love Martin and Short are already attuned to what the writers are giving us here, but Gomez, a performer steadily transitioning into the next stage of her acting career, may not be as much of a known quantity.

This cuts the other way too, of course. (One of the funnier details in the show is also its most telling, which is when we see Mabel has designated Martin's character in her phone as "Charles (old)".) Such is the nature of chasm between Boomers and Millennials; one generation doesn't quite comprehend the other's habits, but when they find common cause the results can be formidable. In the course of realizing this, the writers deftly capitalize on the comedy inherent to these misunderstandings. Mabel has to counsel Oliver and Charles that they don't need to sign their texts, which they resent having to send instead of just calling her up. In turn, she nearly makes their heads explode when she identifies Sting as a member of U2 who wrote "Sledgehammer."

Merging notes of an Agatha Christie-style mystery with a crisp parody of true crime's established formula helps to bridge that gap too. You may recognize this in the show's animated title credits, which simultaneously evoke a hip New Yorker magazine illustration and the classic Edward Gorey opening sequences that open "Masterpiece Mystery!" – the archetypical public television staple kids like Mabel may have watched with their grandparents.

Any show can string together a decent whodunnit, but examining loneliness as a universal mystery is the more captivating concept enriching the three-part harmony wrought by Gomez, Martin and Short's combined performances. Mabel's sardonic, above-it-all rejoinders help her deflect inquiries about who she really is. Behind that protective curtain of sarcasm is a young woman feeling alone and exposed in the big city, fueling her true-crime obsession.

Charles, who wears his old TV role like shield, is similarly inclined to scripting his way around emotionally difficult corners. Oliver's theatrical cheer and strange addiction to hummus and other dips conceals money problems and a disconnect with his family.

Melting these barriers fills "Only Murders in the Building" with a sweet core augmented by the writers' loving attention to the personal quirks defining the most tangential characters. This includes the show's array of cameos and famous guest cast: joining Sting (who is truly a comic delight) are the likes of Nathan Lane and Tina Fey, along with Da'Vine Joy Randolph as a New York Police Department detective worn out by all the amateur sleuth "numb-nuts" making her job more difficult.

Some may find it interesting that Martin created a show in which initially his co-stars, and Gomez in particular, get to deliver some of the sharpest lines while he plays the straight man. This isn't altogether out of character to people who have seen the parts of Martin's filmography that play up his natural affability over his over-the-top physical humor – or, for that matter, read his books or plays. Besides, this balances out later as Charles' subplot expands to lend a necessary emotional weight to the overall arc.

He has a singular way of framing the peculiar in terms that make sense to anybody, and without letting go of the qualities that make them special. This shows his and the other producers' understanding of what a story requires to attain a kind of timelessness: it's all in finding the right balance between the old-fashioned and perhaps underappreciated, and the fashionable and unexpected.

With that in mind, inviting Gomez and Mabel into his and Short's universe to play along with Charles and Oliver is a natural choice. While Martin's and Short's alter egos aren't too far off from what we know about their specific stage presence, Mabel and Gomez stretch that familiar alliance in unexpected ways.

Only eight installments of "Only Murders in the Building" were made available for review, saving what may be the story's most significant answers for the final two. That may be plenty of time to resolve this mystery, but I have a hunch plenty of folks are going to want more.

They'd do well to remember that the Arconia is a big place, and we've only met a few of the folks who live there. With any luck, along with another resident's fatal misfortune, Mabel, Oliver and Charles might catch another mystery to solve. And we'd happily return for another visit.

The first three episodes of "Only Murders in the Building" are streaming on Hulu. New episodes debut weekly on Tuesdays.