Now streaming, the play reveals how a tiny town in Newfoundland welcomed passengers from 38 diverted planes 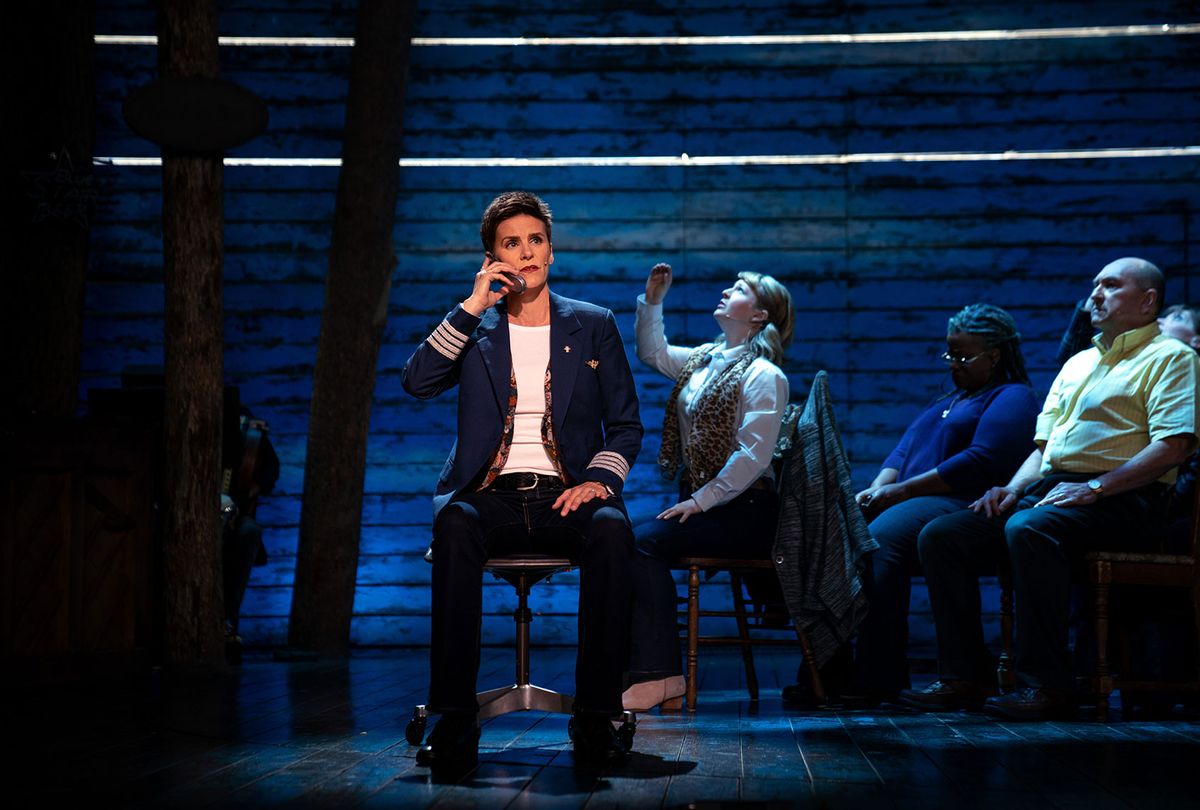 The acclaimed Broadway musical "Come From Away" pours several glasses full of Mr. Rogers' adage, "look for the helpers" when scary things are happening on the news. While the phrase was intended first for preschoolers, it became a consolation meme to all ages circulating the Internet habitually during times of crisis. Sharper perspectives have evolved this reassurance for adults: be the helper as well. Riding the wave of success from Disney+ release of "Hamilton" filmed on Broadway, "Come From Away" reminds us to be the helpers during the most harrowing and darkest times.

Presenting a book and a folksy score and lyrics by Irene Sankoff and David Hein, the sleeper hit "Come From Away" spotlights the helpers and those helped in the wake of the terrorist attacks on September 11, 2001 in which three of four hijacked American planes hit their intended targets, killing thousands. With numerous planes diverted from their destinations, 38 were ordered to make emergency landings at Gander, Newfoundland for security purposes. While the influx of planes was an unusual sight for Gander, how the townpeople were able to accommodate, feed and shelter 7,000 passengers hailing from all corners of the globe for five days was nothing short of miraculous.

Strung together by real stories from Newfoundlanders and passengers, "Come From Away" eschews high-budget musical norms with ensemble-driven numbers and no defined protagonist. With a mundane focus on procedure and a penchant for humor, the play did not initially appear to be a substantial pitch for a musical. "You're writing a show about giving people sandwiches? Good luck with that!" said one Ganderian when he learned of the project.

Seven Tony nominations and one win later, the musical was filmed live for its Apple TV+ release at the Gerald Schoenfeld Theatre in front of a masked audience (before pausing its run for COVID). The cast is small, yet no absence is felt because each person plays multiple people simply by swapping out coats, caps and vocal inflections. Anyone can be the helper or the receiver, operating as both at times. The 12-member chorus includes Jenn Colella, Petrina Bromley, Joel Hatch, Caesar Samayoa, Q. Smith, Astrid Van Wieren, Sharon Wheatley, De'Lon Grant, Emily Walton, Jim Walton, Paul Whitty and Tony Lepage.

When the play opens, Ganderians invite us to Newfoundland with the raucous opener "Welcome to the Rock," setting the scene and the locals' hardy ways before the news disturbs their routine of animal tending, dropping kids off at school, supervising traffic and following the school bus worker strike. The early number "Blankets and Bedding" answers the question, "Where were you during 9/11?" for the mobilizing Newfoundlanders who are shocked at the news footage and 38 planes landing at the Gander airport ("Population has gone from 9,000 to 16,000" in the words of the reporter played by Emily Walton). Crying "I need something to do, cuz I can't watch the news anymore," Ganderians convert anxiety into action by gathering all the necessities — medicine, toiletries, secondhand clothing, and sanitary pads and tampons (the women know more instinctively than their local cop that's not an option but a need) — off the store shelves and their own closets.

Over the course of a 100-minute runtime, tension and humor is layered through dispatched information ("Crisis counselors are called to Gander Academy") and weary observations ("Flight attendants keep telling us nothing's wrong but I got kids and grandkids and I know when someone's hiding something.") Meanwhile, in "Costume Party," travelers feeling out of place change into donated clothing, and Newfoundlanders entertain their guests with the footstomper "Heave Away / Screech In."

"Come From Away" gradually introduces us to each character, who is either based on a real person who went through these events or composites, some of whom are pictured in the end credits. As the individuals emerge from the chorus, their stories stitch a tapestry of testimonial threads that share snippets of actions and memories, similar to the documentary approach of talking heads. We meet passengers with their own histories and arcs: a Texas divorcee (Wheatley) finding herself in a courtship with an Englishman (Jim Walton), a mother (Q Smith) worried for her firefighter son on Ground Zero, a gay couple (LePage and Samayoa) on the verge of a breakup who happen to be both named Kevin ("it was cute for a while," one says), and more. 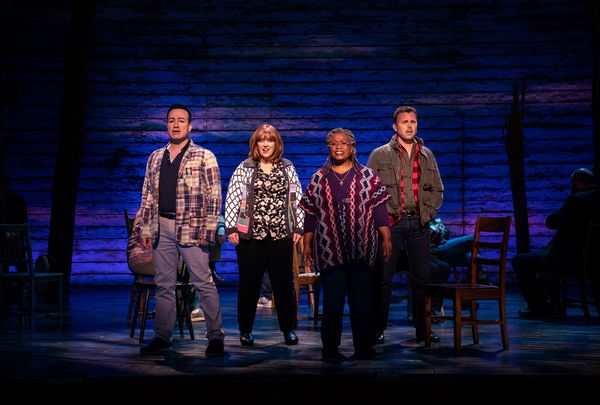 While the majority of the songs are ensembles, the one solo is granted for the showstopping "Me and the Sky," sung by Colella playing real-life pilot Beverley Bass. She shares her experiences as the first female American captain in history and her uneasy reaction to the attacks: "The one thing I loved [flying] more than anything ever was used as the bomb."

The musical has a charming simplicity, owing much to the scenic design by Beowulf Boritt, which favors a near bare-bones humility with sprigs of trees over a floorboard stage populated with tables and chairs, moving bodies that rarely depart the stage, and a seven-piece band situated behind the woods. Christopher Ashley, who directed the production, directs the camera work that floats to showcase Kelly Devine's unfussy choreography.

While tied to 9/11, "Come From Away" avoids the day's more traumatic or provocative realities, such as opting out of the imagery of the Twin Towers. Instead, the mass hospitality in Gander almost feels like the sidelines of history, yet so inexplicably linked to the passengers outside of the devastation at Ground Zero and cut off from their grieving nation. This collective cognitive dissonance is sorrowfully expressed in the penultimate number "Something's Missing" once they're no longer basking in that hospitality.

A 10-second glimpse of then-President George W. Bush (LePage in low lighting) delivering a fragment of a speech – "the resolve of this nation is being tested" – is meant to dispense a token context rather than sit on the implications and aftermath of American wars waged overseas and U.S. policies that infringed on human rights and escalated Islamophobic violence. Oh, the irony of Bush's featured line: "We will show the world we will pass the test."

It isn't that "Come From Away" neglects to illustrate escalating Islamophobia, however. In a sea of stories, we follow a composite character: the Muslim passenger, Ali (Samayoa), navigating his surroundings and the bureaucracy with trepidation. He's singled out by a loud racist when speaking his mother tongue on the phone, and then by officials. A daring scene plucks Beverley Bass, who by then finished her showstopper, and positions her as a white woman in power responsible for having officials subject Ali to a strip search, an act that violates his privacy, being, and his faith. Bass delivers a token apology afterward; the unspoken rationalization is that they were just following procedure.

While the sequence is disturbing, the play quickly transitions to Bass professionally tending to passengers, cutting off an opportunity for the audience to further absorb her part in institutional xenophobia. Here, there's a distinct difference in watching the filmed version versus live. The recording is competent at delegating focus to its performers, but it does not match up to my personal experience of sitting in the mezzanine. The camera work and editing cannot convey the chilling image of Ali isolated outside of the rotating turntable circle during "Something's Missing," since he's too traumatized to speak his plight among the collective until he finds the energy to do so.

Other passengers bring their own wariness with them, shaped by life experiences of prejudice from their homeland. The Kevins are initially reluctant to reveal their couplehood and become nervous when one spills the information, before they are pleasantly surprised by locals casually speaking of gay, lesbian, and bisexual family members. A Black passenger (Grant) fears getting shot at by strangers. His unease is stressed when a mayor (Hatch) who shelters him instructs him to take grills from people's yards (yes, just walk in and take them) to assemble a community BBQ. In a played-for-laughs moment that doesn't stick the landing, he freezes up when a Newfoundlander sees him and innocuously offers his grill.

While best watched while being aware of its shortcomings, "Come From Away" encapsulates a reflection on the 9/11 crisis, visceral when experienced in person (it resumes live Sept. 21 with vaccination and mask required) but no less refreshing to see its humor and heart preserved on the accessible small-screen. The buzzword "feel-good" is frequently applied to "Come From Away." While not inaccurate, the benevolence depicted emphasizes just how much labor goes into softening the psychological blow of a crisis, and how being the recipient of such kindness doesn't always resolve turmoil. Those who absorb the themes of "Come From Away" will be reminded that aid must respect cultural idiosyncrasies. Breakfast is cooked according to Germany's time zone, a rabbi is employed to make kosher food for Jewish passengers, and a Muslim man finds privacy praying in the library since he's wary of stares. What makes acts of humanity universal are respecting the tiny details and specifics.

"Come From Away" is now streaming on Apple TV+.