In Oregon, six workers are suing because they say — having already had COVID-19 — they should not need a vaccine 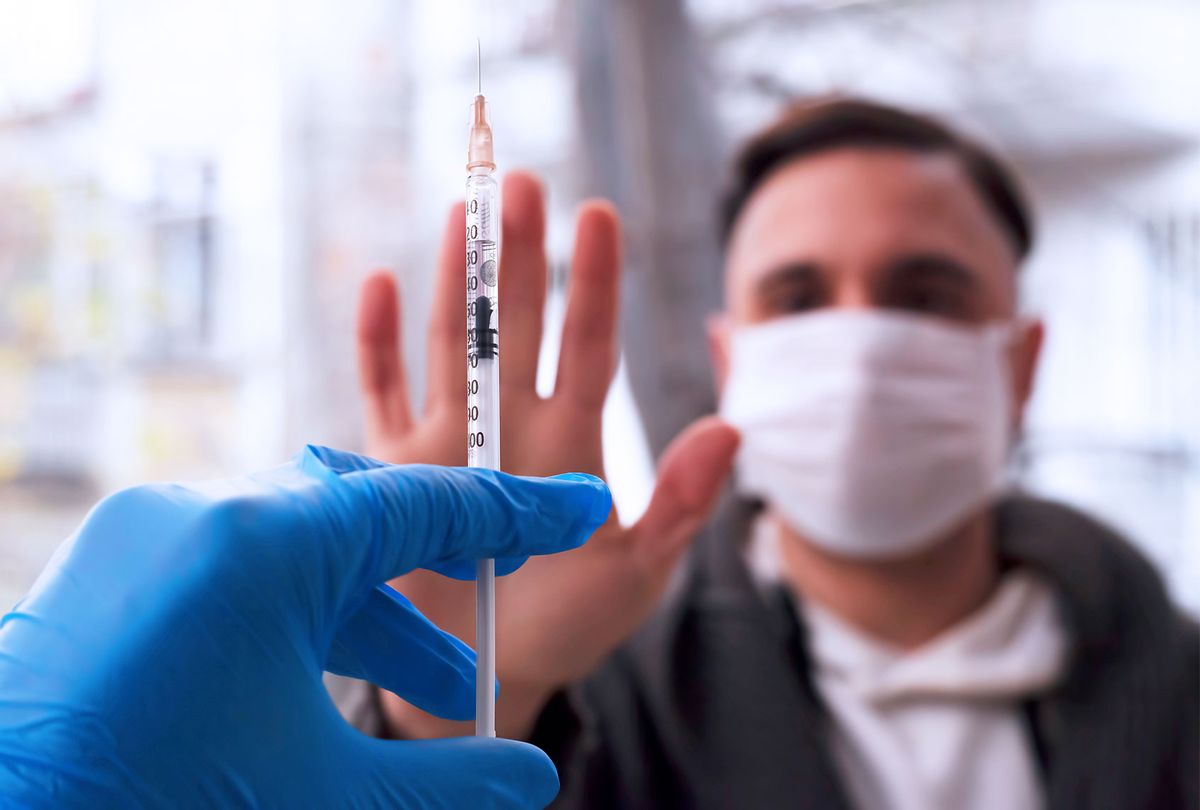 Man refusing to get injection of vaccine (Getty Images)
--

In a historic speech last week, President Joe Biden denounced a "pandemic of the unvaccinated" and announced a series of policies intended to pressure vaccine holdouts into getting their COVID-19 shots. His proposals mirrored aspects of policies instituted by many state governors, including Gov. Kate Brown of Oregon, who has instituted a vaccination mandate in her state for specific workers including school employees and state government workers.

These workers in Oregon are seeking an exception for individuals with natural immunity, and oppose Brown's vaccine mandates rather than Biden's. Certainly, their complaint might seem reasonable to a layperson: in the case of many viral infections, including chicken pox, the body becomes immune after clearing an infection.

So is their objection valid? The short answer is likely not, as the prevailing view in the scientific community is that the immune system appears to be better protected from the novel coronavirus after vaccination even in those who have cleared a previous infection.

Because we lack the technology to definitively ascertain each individual's level of immunity after being naturally infected, it is risky to assume that someone will automatically be protected from COVID-19 just because they were initially sick. Studies back this up: One report by the Centers for Disease Control and Prevention (CDC) about an observational study in Kentucky found that unvaccinated people were more than twice as likely as vaccinated ones to be reinfected with COVID-19.

Still, there is significant scientific debate over the extent to which being naturally infected with the SARS-CoV-2 virus confers immunity.

This brings us to the longer answer, as this is a subject about which respected scientists have good faith disagreements. Dr. Monica Gandhi, infectious disease doctor and professor of medicine at the University of California–San Francisco, tweeted out a number of scientific papers that in various ways suggest the immune system may be able to develop natural protection from COVID-19. One paper, for instance, described how certain parts of the immune system (specifically antibodies from B cells, memory B cells and memory T cells) found that "substantial immune memory is generated after COVID-19, involving all four major types of immune memory."

Of course, even the most optimistic assessments for COVID-19 must take into account the studies which find that antibody-mediated immunity usually sharply drops for people who have recovered from the disease after a few months. Novel coronaviruses are in general the kinds of pathogens to which we are only capable of building transient, or temporary, immunity. The alternative is durable, or lasting, immunity. This means that scientists, instead of being able to offer certain judgments on whether someone who has had COVID-19 is safe from it, have to admit they often do not know.

"The most honest thing would be people who say, 'Look, we recognize that we don't know everything about this disease," Dr. Alfred Sommer, dean emeritus and professor of epidemiology at Johns Hopkins Bloomberg School of Public Health, told Salon. But, he noted that "from a risk perspective, that getting vaccinated — even if you've been infected in the past — is not going to hurt you and might help you."

Gandhi echoed Sommer's emphasis on the importance of humility.

"I think that it brings trust to acknowledge something that there is still a debate in the scientific community" about some subjects related to COVID-19, Gandhi told Salon. There are points on which there is no disagreement — masks work, ivermectin does not cure COVID-19, people who are contagious need to socially distance — but there are others where robust debate exists. This is the case, to an extent, when it comes to the benefits of natural immunity.

"The way I would present it is as a risk-benefit ratio," Sommer explained. "What is the risk of getting the vaccination? If you already had the disease, essentially zero. What is the potential benefit? It could be huge." Sommer added that we also know that "if you look at the immune response six months after a natural infection, it is lower than after a vaccination. If you take the people who had a natural infection and give them the vaccine, they all have a very high antibody level."

Sommer also pointed to scientific precedent to make the case for the naturally infected to get vaccinated. "There is no question in almost every vaccine in existence, some vaccines more than others, the further away you go from the time you've either had the infection or the vaccine, the lower your level of immunity," Sommer added. "Some things provide you with immunity for life, but those are very rare."

One Israeli study demonstrated that point in real time. A large Israeli study found that the natural immunity one develops after being infected with the delta strain of SARS-CoV-2 is more effective than two doses of the Pfizer-BioNTech vaccine. On the one hand, this would seemingly vindicate people who tout the benefits of natural immunity — but if natural immunity alone was sufficient, people could intentionally infect themselves like they do with chicken pox. Yet doing so risks killing themselves or someone else.

The best way to minimize that risk is to also get vaccinated. The same study found that previously infected people who had received at least one dose of the Pfizer-BioNTech vaccine were better protected than people who had only developed natural immunity. Scientists have long agreed that there are benefits to having both natural immunity and vaccine protection.

"It is believed that ﻿natural infection is not as protective as the vaccine," Dr. Georges Benjamin, executive director of the American Public Health Association, told Salon by email. "You can, however, improve on the natural infection by also getting vaccinated." This is known as hybrid immunity, Benjamin explained, and it means that getting vaccinated will enhance the protection you receive from natural immunity. Being vaccinated is also the most effective way to prevent reinfection, severe illness and death, much more so than only having natural immunity.

Under Biden's new plan, all employers with more than 100 workers will need to require either vaccines or weekly tests; all federal workers and all contractors doing business with the federal government must be vaccinated; and all health-care workers whose facilities receive Medicare or Medicaid funding must be inoculated. Biden's policies are expected to directly apply to roughly 100 million Americans (the nation has roughly 330 million people) and are also being met with plausible threats of litigation.

Correction: This article previously embedded a link to a British Medical Journal piece and incorrectly summarized its position. The links have been removed and the author apologizes for the error.