Empty words: How Bush and Giuliani failed to capture the moment on 9/11

The president and the mayor delivered supposedly big speeches on 9/11 — but can you remember anything about them? 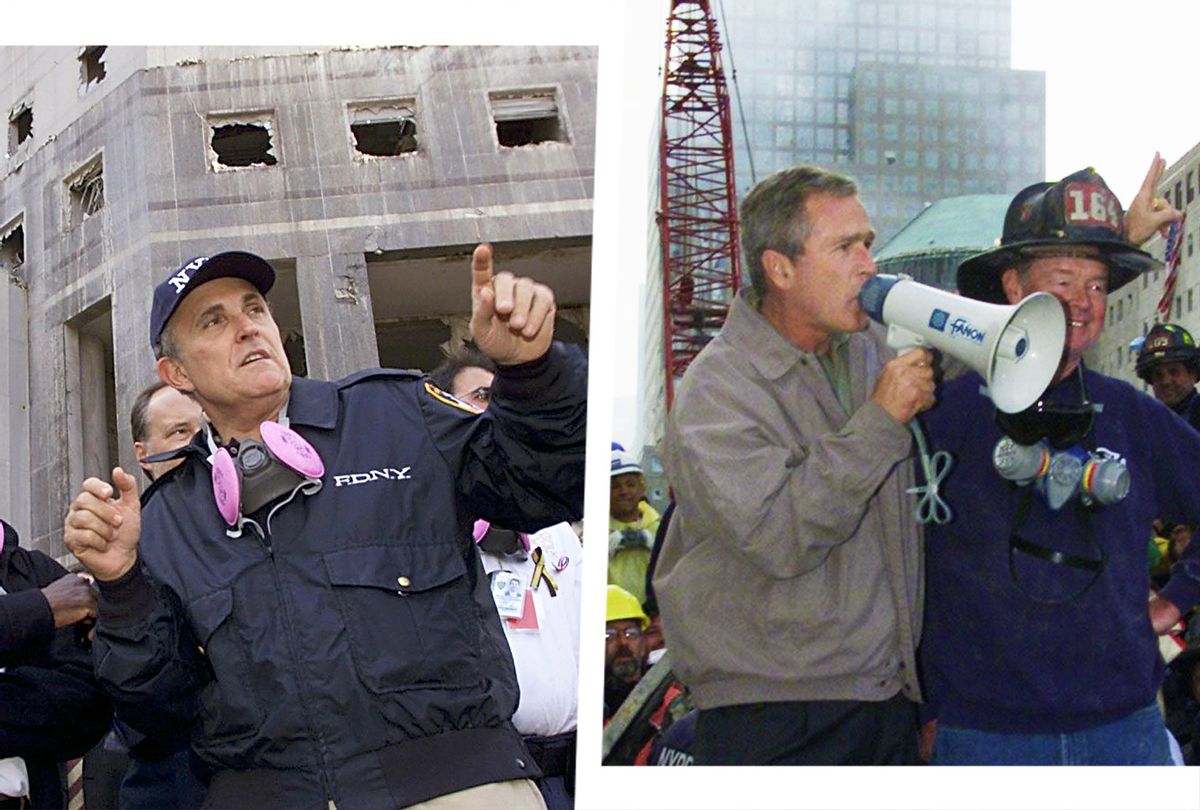 New York Mayor Rudolph Giuliani gives a tour of the World Trade Center attack site on 18 September, 2001, in New York. | George W. Bush speaks through a megaphone beside retired firefighter Bob Beckwith, 69, to firemen and other workers 14 September 2001 at the site of the destroyed World Trade Center. (Photo illustration by Salon/Getty Images/PAUL J. RICHARDS/TIMOTHY A. CLARY)
--

Joe Biden delivered his "Sept. 11 speech" two days before the actual anniversary of 9/11.

It was Sept. 9, 2021, when Biden uttered the words that will almost certainly define his presidency. Speaking to a nation crippled by COVID-19, he blamed a "pandemic of the unvaccinated" for both loss of life and the loss of our way of life, then detailed his plans for protecting America from this threat. One is reminded of George W. Bush, who as president during the Sept. 11, 2001 terrorist attacks likewise needed to prepare America for tough policy choices. Bush had gone into hiding on the day of the attacks themselves, only poking his head out long enough to deliver a stilted, utterly forgettable national address. By Sept. 14, however, he was visiting Ground Zero with New York firefighters, speaking through a bullhorn. When one person shouted that he couldn't hear the president, Bush memorably replied, "I can hear you! I can hear you! The rest of the world hears you!"

He closed with a vow: "The people who knocked these buildings down will hear all of us soon!"

There is a lesson in this story, not just for Joe Biden, but for all aspiring leaders: When faced with a crisis, you must try to meet it with eloquence and effectiveness. Without the former, your best efforts will be forgotten, dragged into obscurity by the shackles of mediocre verbiage. Without the latter, your words may take on meanings you never intended, redounding to your shame instead of your credit.

In Bush's case, his promise to the firefighter was shameful for two reasons. At a moment when the United States needed soaring oratory, Bush was an inarticulate man mouthing the most anodyne platitudes. Neither of his planned addresses — one on the night of the attacks, the other nine days later — contained any especially memorable turns of phrase or spontaneous displays of authentic emotion. It's telling that Bush's rhetorical high point on September 11th came when he was thinking quickly and allowed to display some intuitive wit. If he had presided over the killing of Osama bin Laden, and if the U.S. invasion of Afghanistan had been a success rather than an unmitigated disaster, the clip of that exchange would serve as a mic drop, defining his legacy.

But it was Barack Obama who got bin Laden, and today the Taliban are back in power in Afghanistan. And we see how one man's eloquence can be retroactively turned against him.

Although Bush was president during the 9/11 attacks, he was not the only national leader. Hard as it may be to imagine today, Rudy Giuliani emerged as a unifying and beloved icon during the 9/11 era, striking many people as the president Bush failed to be, crafting an image of strength and resilience. Whatever the subsequent faults of "America's Mayor," he understood the importance of appearing to be on site at all times, dirtying his hands figuratively and literally as he helped his city rebuild.

He also came up with the phraseology that wound up defining the so-called "War on Terror," creating an absurd narrative that Republicans would dutifully follow for the remainder of the 2000s. That happened during Giuliani's address to the UN three weeks after the attacks. His words are worth quoting at length:

Our freedom threatens them, because they know if our ideas of freedom gain a foothold among their people, it will destroy their power. So they strike out against us to keep those ideas from reaching their people.

The best long-term deterrent and approach to terrorism, obviously, is the spread of the principles of freedom and democracy and the rule of law and respect for human life. The more that spreads around the globe, the safer we will all be. These are very, very powerful ideas. And once they gain a foothold, they cannot be stopped.

Giuliani was not the first Republican to characterize the Sept. 11 attacks this way, but he used the most artful prose to do it, and his particular framing was the one that stuck. It was also utter nonsense; superhero movies add more nuance to understanding their villains' motives than Giuliani and company did in analyzing Sept. 11. There is no defending terrorism, by Islamist fanatics or anyone else, but it's reductive and childish to claim that those who commit such acts are simply motivated by a hatred of freedom and a fear of democracy. America has tried to spread its version of those things around the world for decades, with a notable lack of success.

Giuliani's failure wasn't the quality of his rhetoric but the fact that he simply didn't have a valid point. He might have benefited from looking at American presidents who led successfully during a crisis because they did have a point.

When Franklin D. Roosevelt took office in 1933, America was in the throes of the Great Depression, the worst economic setback in our history. During his first inaugural address, he used a brilliantly crafted phrase to capture his approach to governing: "the only thing we have to fear is fear itself." While those words are engraved in historical memory, the ones that immediately follow are just as important: Roosevelt singled out the "nameless, unreasoning, unjustified terror which paralyzes needed efforts to convert retreat into advance." During his presidency, Roosevelt frequently rose above ideological concerns and experimenting with a wide range of policies that might alleviate economic suffering. He believed Americans needed to keep an open mind, and used his oratorical gifts to help them do that. Everyone came to associate Roosevelt's political brand with a fearless and even daring approach to governance, including his political opponents.

A similar observation can be made about Roosevelt's famous speech given the day after the Pearl Harbor attacks in 1941, probably the closest parallel to 9/11 in our history. Again, it is helpful to recall not just his most memorable line (italicized below), but the words that immediately followed it:

Yesterday, Dec. 7, 1941 — a date which will live in infamy — the United States of America was suddenly and deliberately attacked by naval and air forces of the Empire of Japan.

The United States was at peace with that nation and, at the solicitation of Japan, was still in conversation with its government and its emperor looking toward the maintenance of peace in the Pacific.

When Japan attacked Pearl Harbor, the U.S. had to that point carefully avoided direct military conflict with any of the combatant nations in World War II. Roosevelt's "date which will live in infamy" conveyed, with perfect gravity, the emotional import of the betrayal that had suddenly thrust America from peace into war. Roosevelt knew that millions of Americans wanted the U.S. to stay out of the war, and he wished to convey respect for their views while making clear that the time for isolation had passed. These words helped frame the narrative in which America entered World War II not as a predatory superpower, but as a peaceful bystander dragged in from the sidelines by an act of unprovoked aggression.

Moving closer to the present, we could consider the speech delivered by Lyndon Johnson shortly after he became president, which of course happened when John F. Kennedy was assassinated in November of 1963. The nation was traumatized by the first presidential assassination in more than 60 years, and millions of Americans had viewed Kennedy as a visionary leader and felt shattered by his death. Johnson knew he had to assure people that Kennedy's agenda — quite liberal for its time — would not be abandoned by a new president widely regarded as a conservative Southern Democrat. Here's what he said:

Today in this moment of new resolve, I would say to all my fellow Americans, let us continue.

This is our challenge — not to hesitate, not to pause, not to turn about and linger over this evil moment, but to continue on our course so that we may fulfill the destiny that history has set for us.

From there, Johnson proceeded to list JFK's main priorities at the time of his death: Civil rights legislation, tax reform, education spending, expanding youth employment, foreign aid and so on. As a master parliamentarian, Johnson had the skills and resources to bring Kennedy's bills into reality — and he largely did that — but the leadership skills he displayed in the immediate aftermath of Kennedy's death was instrumental to his string of historic success. By turning Kennedy into a martyr, Johnson essentially sanctified his agenda and pushed it onward.

Going back to Rudy Giuliani after the 9/11 attacks, his words were pretty but rang hollow because he didn't have a genuine cause, only vague clichés about the greatness of America. FDR wanted to lift America out of the Depression and win a war; LBJ wanted to turn Kennedy's ambitious social agenda into reality and help disadvantaged Americans from all walks of life. (Importantly, both men mainly succeeded in their goals.) Giuliani had nothing comparable to offer. He literally just claimed that the terrorists hated our freedom.

It is almost certainly a coincidence that Biden's big speech about the COVID-19 pandemic came so close to the 9/11 anniversary, but the parallel is interesting and instructive. It was a fine speech in rhetorical terms, but more important, he was right. Americans are dying and losing their freedoms because a minority, primarily motivated by bizarre right-wing partisanship and mistrust of science, refuses to get vaccinated, wear masks or follow basic public health guidelines. There is no sound argument to support their refusal, and an overwhelming scientific consensus that they are misguided. Allowing this defiance to continue without penalty puts innocent lives at risk and hurts those who are behaving responsibly. Biden struck the right balance between scolding the wrongdoers and announcing policies designed to pressure them into doing right, while remaining poised and dignified. In rhetorical terms, his speech was as adept as Bush's moment at Ground Zero, or the finest flourishes from Roosevelt and Johnson.

Now, however, Biden has to follow through on what he promised, which is always the difficult part. Biden has learned at least one important leadership lesson from 9/11, in that he gave a great speech — something Bush was unable to do. Now Biden has to make sure that the speech is remembered as a turning point, and not as a promise he couldn't keep.