"I was really shocked": Mélanie Laurent on "Mad Women's Ball" and how "problem" women are controlled 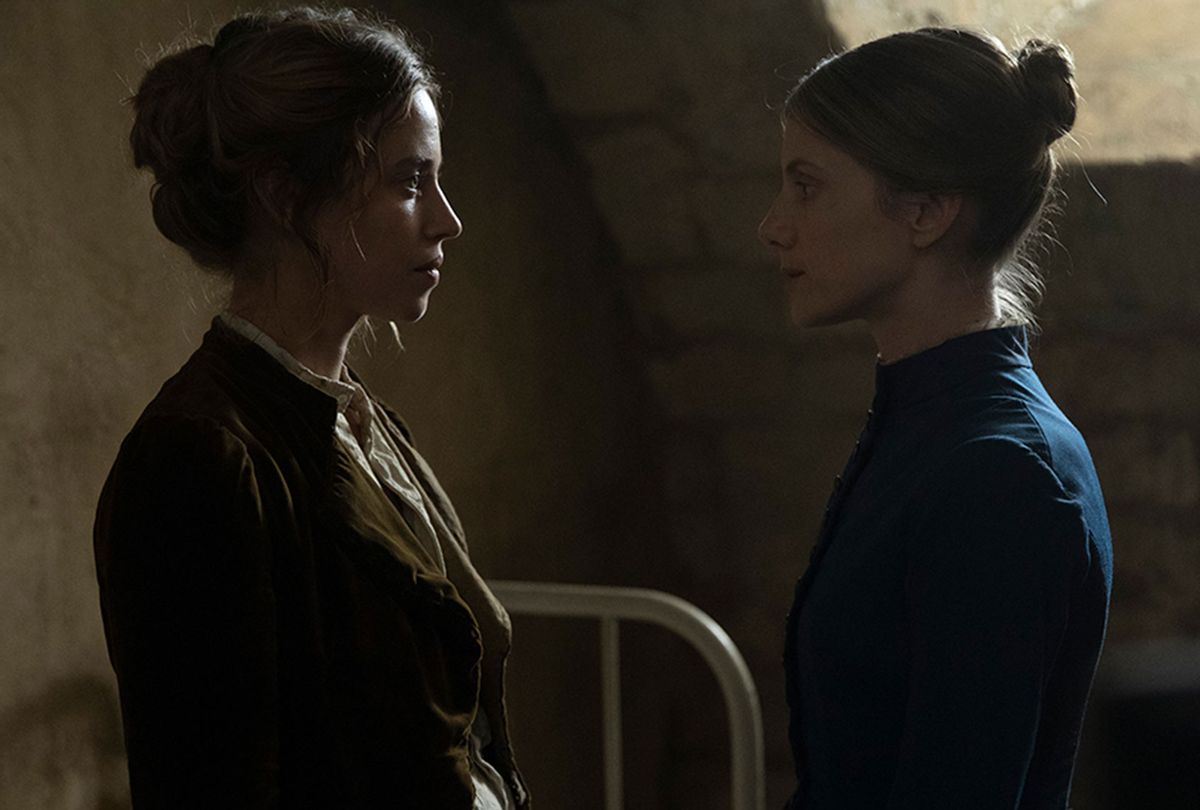 Mélanie Laurent has been skillfully directing films for a decade now (and acting in them for twice as long). She has a real talent behind the camera, as she illustrated with the drama "Galveston," a flinty noir, and "Breathe," about two moody French classmates. Her latest film, "The Mad Women's Ball," adapted from Victoria Mas' historical novel, is equally superb.

This new Amazon Prime drama, which is set in 1885 Paris, tells the story of female oppression and independence. Eugénie (Lou de Laâge, from Laurent's "Breathe") is the daughter in a wealthy family. She enjoys the privilege of a hot bath but resists the conventions women of the day must follow. Not content with making society debuts, or finding a good husband, Eugénie prefers to read, and sneaks out to attend Victor Hugo's funeral. Her father François (Cédric Kahn) is displeased with her behavior. Moreover, Eugénie has a gift of being able to communicate with the dead. When she has a series of haunting episodes, her family commits her to Salpêtrière Hospital, where she will be treated for madness.

However, Eugénie insists she does not belong in an asylum. She is aghast at how she and the other female patients are treated. Louise (Lomane de Dietrich), who befriends her, is being sexually abused by her doctor, Jules (Christophe Montenez). Eugénie and others are subjected to cruel hydrotherapy ice baths. And when Eugénie is sent into isolation and placed under the care of nurse Jeanne (Emmanuelle Bercot), the young woman is kept in darkness. The only person who seems to be sensitive to the treatment of Eugénie and the other women is Geneviève (Laurent), a nurse who bonds with Eugénie because she helps Geneviève communicate with her late sister.

Laurent's performance is as strong as her direction, as both the character and the filmmaker guide viewers to the emotion and meaning of each scene with restraint, not excess. The characters of Eugénie and Geneviève are restricted by rules, but they find freedoms that allow them to become empowered in different ways.

The actress-filmmaker chatted with Salon about her new film.

What drew you to this material, and what were the challenges you faced in making "The Mad Women's Ball?"

The film emphasizes the way women are treated as second-class citizens. They must conform to rules made by men (e.g., to marry) and, as the film shows, are not allowed to have much if any independent thought. What are your thoughts about how women have been, and still are, denied a voice in society?

I was really shocked. When you make a period film, you have to research, and dig into the historic details. Victor Hugo was a god in France and the world, and millions were in the street when he died. He was one of the first celebrities to do spiritism. He lost his daughter and he never recovered from it. He was doing the spirit sessions, and was talking with his daughter's spirit, and felt better about things. I thought: That's how I will open my film, the shot of a fragile silhouette in the back of a huge crowd. She will turn her face to the camera to show she feels something different from them. [Hugo] was allowed to talk about spiritism because he was a man. Eugénie had a gift, but she had to deal with her gift and the fact that she was a woman. She's bourgeois, which is another level of entitlement. If I think about my first idea of making a film about women in another period of time, you realize the witches in the Middle Ages knew things, and they healed people, and how they were massacred. I realized I made a film about 200 years ago, and 500 years ago, there was the same problem. Women who know things and can say something about any society are going to be a "problem."

The film also tackles several important issues, from women being abused by their doctors, to how women are diagnosed with "hysteria" if they are simply assertive. What did you learn about the history of how women have been institutionalized and stripped of their value and dignity for behavior or conditions that are not abnormal? The film has the characters expressing emotions they cannot control.

When I researched studies, what was really shocking — and why I didn't portray Charcot (Grégoire Bonnet) as a great man — is because his diagnostics were not about madness. Very few were mad. Camille Claudel is the most famous. I was shocked to see how the [female patients] are there to serve his research. He barely treated their problems. He wanted to have new studies about neurology, and what he left was a big work as a young neurologist. His studies helped other doctors make progress. He didn't care about those women. There was no relation between the cause and the effect. When I read about women being raped and their hysterical crises after the rape, he worked on the crisis, and not on why. Now, with some perspective, we can take a step back and realize how psychology and history go together — especially when you treat madness. You can't avoid the why.

Geneviève is sympathetic to Eugénie. Both have interesting relationships with their fathers. What observations do you have about these characters and their parallel lives?

It's a friendship story. They feel something the first time they see each other. They can read each other's minds in a weird way. Geneviève is so rational, and close to science. It's hard for her to accept spirituality and that other level Eugénie takes her to. But they have common points. What I loved about Geneviève's arc is how she changes. What I love about Eugénie is how she doesn't. Eugénie changes a lot in the first 10 minutes, actually, when she falls in love, and receives the most important book of her life. In those few minutes, suddenly everything changes. And when she is about to know love and desire and pleasure and science, and has a book that says she's not crazy, she is taken away extremely violently, by her family, and dragged to the hospital. Like every story about a prison and prisoners that is unfair, the situation makes you sick.

There are several moments in the asylum that are punctuated by chaos and screaming, torturous treatments, as well as the isolation scenes in darkness. Can you discuss depicting the asylum scenes?

When you have men in the shot, it's extremely violent, and when you have the relationship with science and instruments, you have feeling of torture. And then, in the same hospital's space and locations, you have a lot of joy and sorority. I worked on making the first part quiet and cold, and full of tracking and slow shots. For the second part, I worked on the sound to make it noisier, with the torture scenes — it's a noisy prison, and she's coming from a quiet place. I wanted to oppose those different worlds torture vs. warmness, bourgeois vs. popular, and how visually you can oppose them.

Do you believe that we can communicate with the dead/spirits as Eugénie does? Have you had any encounters?

I think I am more like my character. If I had to live with the loss of someone that I loved so much, I would love to meet someone like Eugénie. I don't know if I would believe in her, but I would love to talk to her, and be happy if she would say something.