It's not that weird to feel schadenfreude when COVID-deniers get COVID, psychologists say 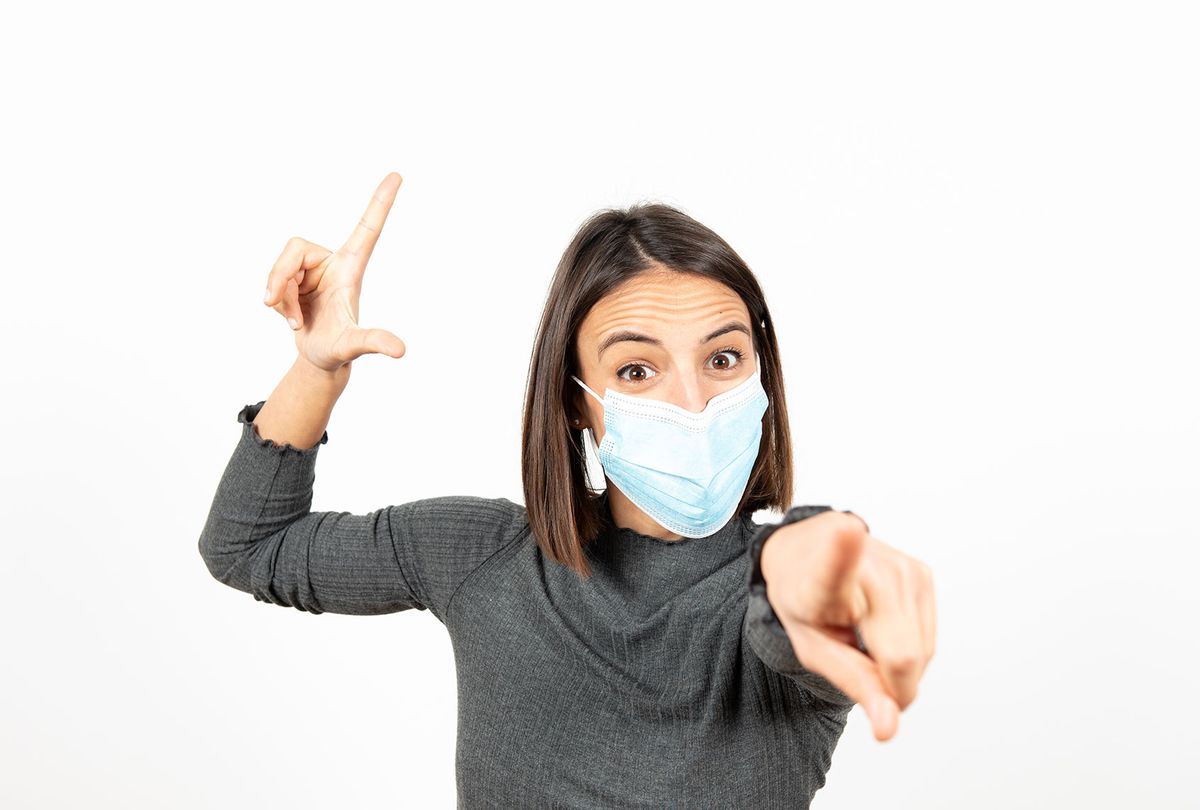 Hundreds of thousands of people follow a Reddit forum called "HermanCainAward" which, despite its name, does not exist to honor the late businessman and politician. The group exists to mock those who denounce or defy public health measures (vaccines, mask-wearing, social distancing, etc.) and then later die of COVID-19 infections.

But the infamous subreddit is not the only place where netizens flock to share schadenfreude towards COVID skeptics and deniers who get the disease. A glance at Twitter or Facebook reveals people flashing vulgar images at reactionary politicians demanding treatment after becoming sick or reacting to the hospitalization of a COVID-19 vaccine skeptic by asking, "Who can resist schadenfreude opportunities like this?"

Some might find this a cruel trend, while others might see it as an example of someone getting their just deserts. Yet media commentators are taking notice. Recently, Wired decried a popular BBC article about a Los Angeles man who mocked COVID-19 and then died of the virus. Other subreddits like r/LeopardsAteMyFace (750K members) and r/CovIdiots (117K members) exist to mock people who denied COVID-19 science; or, in the case of the former group, voted for policies and politicians that would hurt them, and were then (predictably) actually hurt by them. The Herman Cain–themed subreddit itself is named for Republican presidential candidate and reactionary Herman Cain; media outlets like Slate and Mel Magazine have covered the thread in a critical light, but it has 310K members at the time of this writing.

Cain, notably, was a big supporter of Donald Trump, who infamously flouted medical advice about COVID-19 during his presidency. After Trump was diagnosed with COVID-19, there were widespread reports of people feeling conflicted about his infection. As a fellow human being, certainly Trump's life has value; yet many felt justified in celebrating his infection given how he had actively worsened a pandemic for political gain. Author Emma Kennedy wrote that she only wanted Trump to go to jail and therefore hoped he would get better soon; a Christian woman in the Midwest told Salon last year that she struggled to sympathize and saw poetic justice in Trump's fate.

Indeed, perhaps the knee-jerk negative reactions to online celebrations of others' suffering don't quite get how psychology works. As therapists and psychologists told Salon, it can be therapeutic, even cathartic, to share in schadenfreude — particularly in a time of crisis like now. And such individual emotions can be far more complex than the internet makes them seem. As therapist Amalia Miralrío said, "when we talk about emotions we can have multiple emotions at once and all parts can be true. So we can be really happy that he's sick, and we can also hold this value that we don't like to wish ill on people — both parts can be true."

Schadenfreude, a German loan word, translates to "pleasure derived by someone from another person's misfortune." Though its status as a loan word might lead one to believe it is an uncommon emotion, that's not true in this case. Indeed, it is something that many of us feel all the time, so much so that it is often exploited by sitcom writers. Laughing at a villain get repeatedly hit by a rake? That's schadenfreude. The pleasure of seeing a bad guy freeze to death in a liquid nitrogen explosion? That, too, is schadenfreude you're feeling.

As Shensheng Wang, a PhD Candidate in psychology at Emory University who has written about schadenfreude, told Salon by email, scholars have linked schadenfreude to everything from "the perceived unfairness of others" to perceiving that the misfortunate has befallen someone "who does not deserve a high status." It is therefore entirely logical that people feel schadenfreude because it reinforces their deeper beliefs about right and wrong; "the moral evaluation of the victim plays a critical role in eliciting the schadenfreude."

Scientists only have ideas about the neurological mechanisms behind schadenfreude, as "neural evidence suggests that this might be linked to greater activation in the ventral striatum," though this correlation has not been proved to be causal. Wang added that, clinically speaking, schadenfreude is not inherently healthy or unhealthy. It depends on the context, as "many negative affective experiences (e.g., anger, fear, and shame) can be both adaptive and maladaptive, and I believe schadenfreude is no exception." Some of these factors could certainly be applied to people who revel in the misfortunes of the anti-science crowd. Wang said that people can feel schadenfreude because of "intergroup conflict" influencing sentiments on a group level, or against an individual suffering because they feel "malicious envy — the pain caused by upward comparison that motivates oneself to pull others down rather than moving oneself up."

Indeed, schadenfreude may not even be a particularly big deal to many people who experience it. In 2015 a group of researchers — one in the Netherlands, one in the United Kingdom and one in the United States — conducted a study on schadenfreude. They agreed that schadenfreude is distinct from gloating — the reasoning being that gloating happens when you actively cause someone else's adversity; whereas schadenfreude involves the more innocuous acts of passive observation and enjoyment. Their paper opened with a quote by Friedrich Nietzsche, the famous German philosopher:

"To see others suffer does one good, to make others suffer even more: this is a hard saying but an ancient, mighty, human, all-too-human, principle to which even the apes might subscribe."

The COVID-19 pandemic has brought on an interesting twist which complicates Nietzsche's dichotomy: Now we see people enjoying the suffering which others bring on themselves, but which they implicitly feel is deserved. Therefore, even though they did not cause that suffering themselves, they still gloat. At the same time, the scholars found that "just as Nietzsche suggested, schadenfreude is a modest, furtive, guilty pleasure that does little to empower those who experience it." Gloating is more pleasurable because the person experiencing it actively caused their foe's suffering and, if they were lucky, knows their target was "then made to witness one's pleasure at their defeat." People who gloat feel physically invigorated, almost as if they "walk on air" over their defeated rivals. "A little smile, and a quiet satisfaction, is all that people seem to get from schadenfreude."

That said, schadenfreude may not be the most accurate term to describe the emotions at play in COVID-19 era gloating — at least not in every case. Colin Wayne Leach, professor of psychology and Africana Studies at Barnard College, was the lead author of the aforementioned article; four years later he published another essay, this time in the book "Philosophy of Suffering: Metaphysics, Value, and Normativity," in which he identified a German term that more precisely describes the feeling of seeing justice done to another seen as deserving: Genugtuung.

This seems to better fit why some people react with happiness when individuals who hurt others by denying COVID-19 get infected themselves. He described a straightforward psychological dynamic: When people who deliberately spread misinformation about COVID-19 get sick and die, it seems like "righteous punishment."

"With Genugtuung, the psychological motivation is wanting to live in a 'just world' where those who do bad suffer and those who do good thrive," Leach explained. "Taking pleasure in someone suffering their just deserts affirms the value and importance of justice in our lives."

There is also a less morality-driven motive: Democrats, liberals and people who follow the science may enjoy seeing the "other side" losing. In this hyper-partisan political moment, this is perhaps unsurprising. Partisans living in deeply bifurcated societies routinely dehumanize their opponents, which is not necessarily a good thing for social cohesion. Yet this is as common on the right as it is on the left, even if those on the right have different ways of doing it to their purported opponents.

Indeed, many scholars argue that excessive reveling in schadenfreude (or genugtuung) deepens social divisions and causes us to dehumanize other human beings. That is arguably evident in the disgust felt toward the COVID-19 deniers who get sick, as the mass schadenfreude toward them demonstrates. To the extent that this may happen, it is hard to defend either sentiment on a moral level.

At the same time, entirely denying our basic nature as humans — the tendency, which Nietzsche suspected exists even in apes, to revel in the suffering of those we consider deserving, and for them to know that we enjoy their pain — is likely unfeasible as well. Psychology tells us that those who gloat are at least not abnormal for doing so; each person must decide for themselves what to do with that information.

As for the Herman Cain Awards? It is difficult to predict whether that specific manifestation of schadenfreude will last, but it is hard to imagine that the underlying frustration will go away. There is a reason why President Joe Biden trotted out his most pointed rhetoric while delivering a historic speech on vaccine mandates. When he said "our patience is wearing thin," he was doing more than making a political point. He was speaking to a deeper anger that is starting to bubble to the surface — even if, in some cases, it involves some of humanity's ugliest impulses.