From Hitchcock to the Macarena, "Titane" director on how monstrosity and humor feed her body horror

"My characters' bodies aren't nice to look at; they are damaged … We can relate to that," Julia Ducournau says 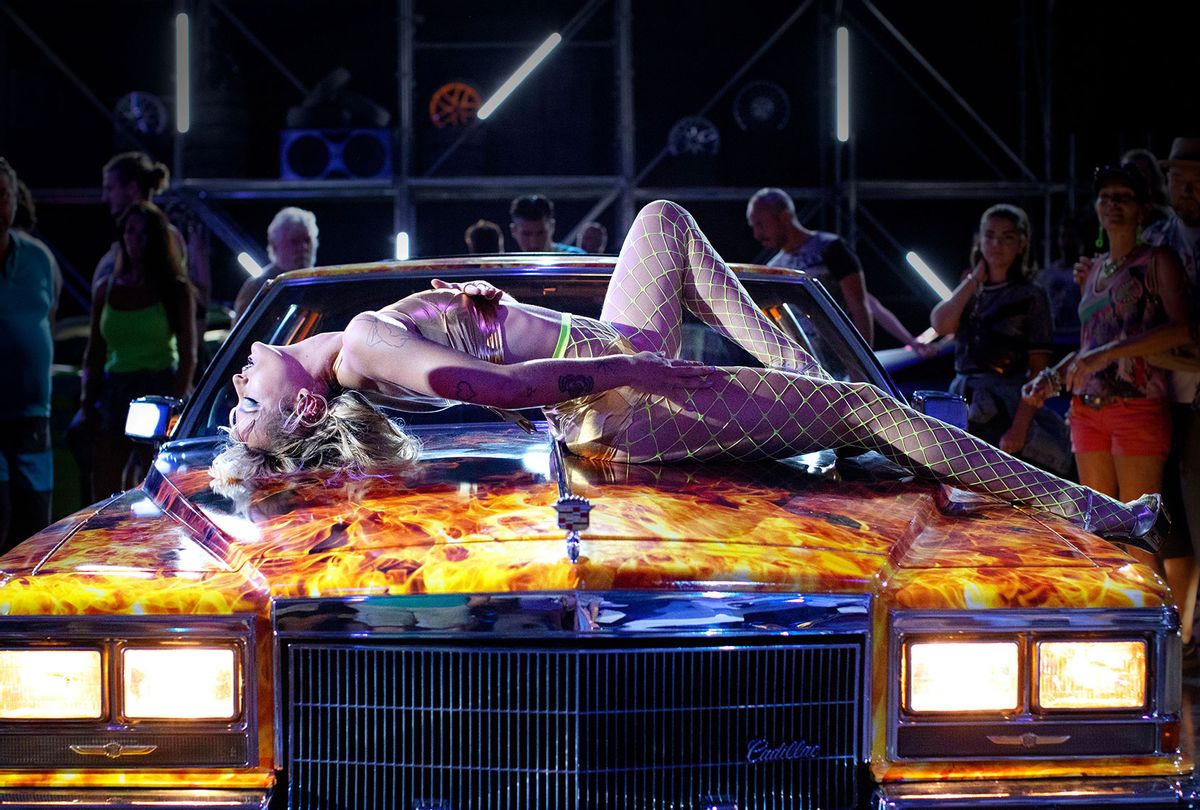 Julia Ducournau's astonishing "Titane" is a dangerous film — and that is a good thing. It is not because this intense, uncompromising drama starts out as one kind of film and then morphs into another. It is more that Ducournau, who won the Palme d'Or at Cannes, can mix hypnotic images and body horror while also generating tremendous emotion. Viewers will pick at it like a scab to see what's underneath.

It is hard to discuss the film without spoiling things, but it involves Alexia (Agatha Rousselle in a stunning feature debut) who has a titanium plate in her head (hence the title) escaping a tricky situation by posing as Adrien, the adult missing son of Vincent (Vincent Lindon), a firefighter. What happens over the course of the story may defy logic, but that is what makes the film so involving — viewers become invested in these characters, who make some very risky decisions, to see what they will do next.

Ducournau delivers on the tremendous promise she showed in her feature debut, "Raw," which was equally unsettling. She spoke with Salon about the vivid images and damaged bodies in "Titane."

There is this idea of the organic and the mechanic. Can you talk about creating the visceral visuals that are both difficult, but beautiful, such as the scar on Alexia's head?

The scar in Alexia's head is something she would keep throughout whole film. It was highly symbolic for many reasons. Obviously, because of the plate underneath, but the shape of the scar had to have something to do with identity, as there is a question of that in the film. The scar is shaped like a spiral, a snail, which is a direct homage to Madeleine's chignon in "Vertigo," which is also shaped like a snail. "Vertigo" was an important reference for me here, especially through Vincent's fantasy of being able to sculpt his own son back through her and the way he models Adrien — shaving his head, the clothes, the nose, all that. This homage was important for me. I wanted to have a modern version of Madeleine's chignon on the side of Alexia's head. But also, because Alexia has a chignon constantly — that's where she puts her pick.

"Titane" features numerous tonal shifts that keep viewers off guard, which makes your film thrilling and enthralling. Can you talk about this narrative strategy?

I like to subvert the codes of different typologies of film, obviously, body horror, but also comedy, drama, and thriller. I do that because naturally, for me, that is a good way to play with the audience's emotions and to keep in touch with my characters' points of view all the time. Not imposing one mood but having the mood shift with my characters. For example, in the Macarena scene, that starts out as something socially heavy and very dramatic, but then all of sudden, because the main character looks at an old lady, who is derailing, that opens door for comedy and it takes us out of the drama because she focuses on the lady who is clearly not well. Then you add the Macarena on top in order to make a very clear shift that brings us to full comedy, which I use to create a bond between the characters at this level. I love this. In the same way I use different codes and typologies of film, to create my own language throughout the film, I love to make scenes morph, so you go from one emotion into another, from drama to comedy, or comedy to horror.

You also have a very distinctive way of filming gender, sexuality, bodies, and nudity. Can you talk about how you film bodies here? The car show is one style but the scenes with Adrien are another.

For me, all the imagery of the body within the realm of the car show is complete allure. I try to create the stereotype that I am going to debunk afterwards. In the car show, we have an evolution that goes from something that looks like a male gaze on the dancers and when we get to Alexia, she reclaims the narrative by dancing with complicity with the car and looking through the camera. She is reclaiming the narrative by looking at you, rather than you looking at her. It's not relevant or very significant in terms of how I treat bodies in the whole film or in my work.

What I am interested in is to portray bodies that are extremely trivial. I do not do anything to glamorize them, quite the contrary. I do not feel that glamour is something we can relate to at all. My goal is to make you relate to my characters' bodies, in the perspective of your own body experience, but also in the way you look at your own body. We are never satisfied with our bodies, like most people all the time, and that creates a bond between us. I tried to build that same bond with my characters. All my characters' bodies are not nice to look at; they are damaged, and often in pain. They open up, they shed their skin. This is not glamorous, but I do think, in its triviality, and in its, let's say, almost monstrosity, we can relate to that. I think we can't relate to perfection or perfect bodies, but we can relate to every single imperfection that we see on someone else's body. I find that incredibly endearing.

The film is certainly going to test the pain threshold for viewers. As if "Raw" didn't! What can you say about creating sequences featuring people suffering — sometimes by their own hand?

It's not like I have agenda: "I'm going to make my characters suffer and I'm going to make you watch." The specific scene when Alexia changes her appearance, there is something here that is essential for me to make you feel how far she will go to leave her former skin behind. I needed to do that because Alexia is an unrelatable character. She feels no emotion, she's closer to a machine than a human being. That makes her someone we cannot feel for in your heart or head, but I want you to feel for her in your body. If you can't relate, that you will leave because you don't understand the story or the character, you are not interested to see where she is going. My entry point is her body. What she inflicts upon it in order for you to feel this immediate body empathy is the same as if you see someone break their legs in real life. You may not have had your legs broken, but you know that it's painful because you have this immediate body empathy that links us all. This is my entry point to the character.

"Titane" is currently in theaters.