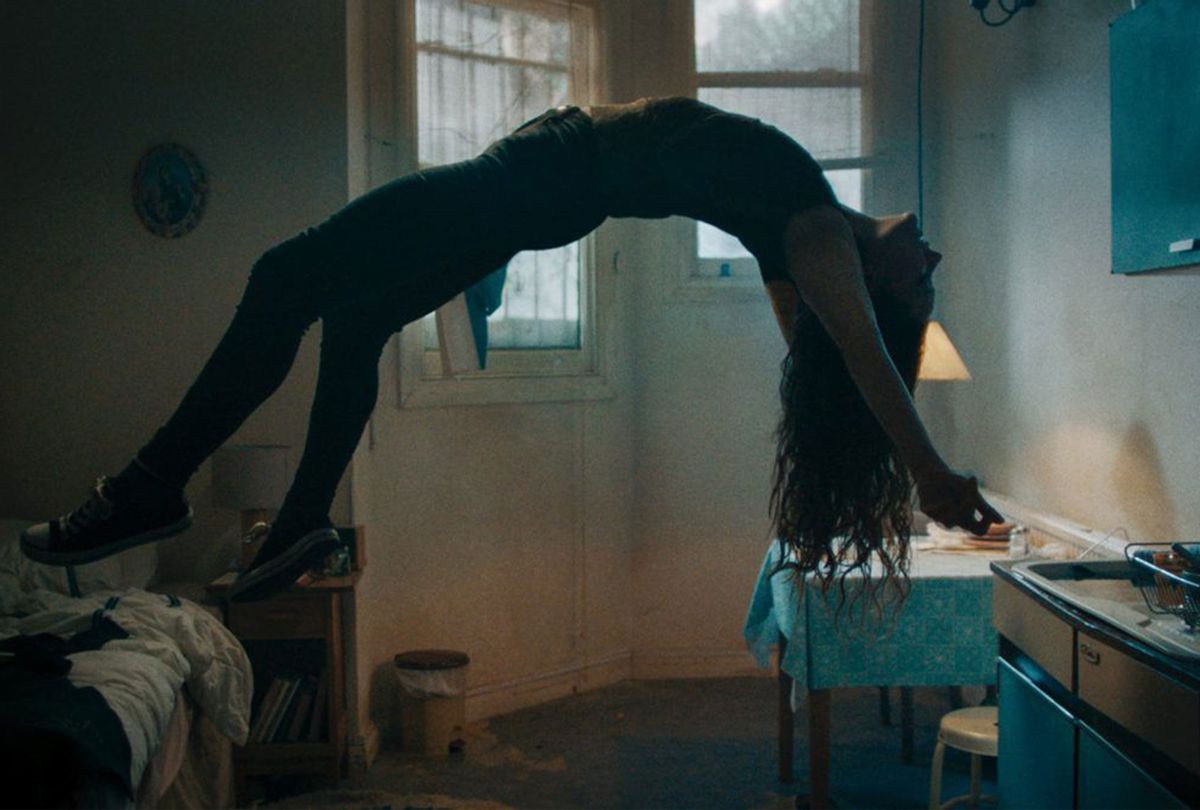 The following contains spoilers from "Saint Maud," including the ending.

Horror as a genre is preoccupatied with female sexuality, and often this leads to rather tired and sexist tropes, which isn't surprising in a male-dominated genre. In Rose Glass' feature directorial debut, she pushes against these expectations with the unsettling new psychological thriller she wrote, "Saint Maud."

The film stars Morfydd Clark as Maud, a newly devout hospice nurse who becomes obsessed with saving the immortal soul of her dying patient, Amanda (Jennifer Ehle), a famous dancer and choreographer who has retired to the shore of a resort town for the final months of her life. Maud's transformation throughout the film plays with many familiar genre elements – religion, sexuality, and physical trauma – in unexpected ways that elevates the film.

In traditional slasher films, archetypal characters are plucked off one by one in a now-predictable order. The hot, popular cheerleader — who casually indulges in drugs, alcohol and sex — is one of the first to go, while "the final girl," the last surviving character, is typically sexually unavailable or virginal.

"Saint Maud" takes the usual heteronormative sexual experience out of the equation, but still achieves satisfaction, this time through different means. Amanda initially tolerates Maud's talks of conversion — it's purposely unclear if Amanda is genuinely interested or perhaps poking fun at Maud — and the two pray together. Where Maud genuinely seems moved to a kind of orgasmic ecstasy, Amanda pretends for Maud's sake. Through the shared pseudosexual experience, Maud falls for Amanda, which prompts a flurry of excitement and shame.

This does not mean that physicality is not a factor in "Saint Maud," but it doesn't fall into the well-established "death is sex" trope. As Randy (Jamie Kennedy) puts it in the first "Scream" movie, "There are certain rules that one must abide by in order to successfully survive a horror movie. For instance, number one: You can never have sex. Sex equals death, okay?"

Instead, women's bodies in horror and especially in "Saint Maud" often become the source of dread itself. They are the monsters, and their respective monstrosity is an extension of their sexuality. This manifests in different ways.

In 1942's "Cat People," the protagonist refuses to have sex with her husband because she fears it will turn her into a killer cat (spoiler: it does). There's "Teeth," a 2007 horror-comedy, which provides an update on ancient "vagina dentata" folk tales and not-so-subtly grapples with ideas of emasculation and castration at the hands of sexually active women. There are numerous films where coming of age and an ensuing pull between sexual expression and repression, coincides with developing horrific, supernatural abilities — "Carrie," "Thelma," "Ginger Snaps."

It's an arm of body horror, a term that springs from horror cinema, but has existed in fictional narrative for as long as we've been telling stories. Body horror is a technique used in the genre to repulse or disturb audiences by showing visceral degenerations or transformations of the human body. Common examples include zombification, mutation, mutilation, possession and some types of self-inflicted gore.

From Io, the mortal lover of Zeus who was turned into a cow, to "The Exorcist," the female body is prime for uncontrolled possession or transformation. It mirrors the physical reality of a life marked by painful metamorphosis through menstruation, pregnancy and menopause.

As the now-famous line from "Fleabag" goes, "Women are born with pain built in. It's our physical destiny — period pains, sore boobs, childbirth. We carry it within ourselves throughout our lives."

With "Saint Maud," Glass joins a burgeoning line of filmmakers that, instead of preying upon or exploiting that pain, are subverting some of the sexist elements of body horror by imbuing their female subjects with a level of autonomy that often renders their films both more nuanced and more terrifying.

We saw this in the 2015 film "The Witch"  in which a 17th century family who is banished from their colonial community and lives at the edge of a bleak New England forest. The patriarch, William (Ralph Ineson), is a pious Puritan who is apprehensive about the state of his teenage daughter, Thomasin's (Anya Taylor-Joy) soul because she "begat the sign of her womanhood" and suspects her of witchcraft.

After her family dies off member by member, eventually, Thomasin becomes the "final girl" and decides to "live deliciously" at the invitation of the evil Black Phillip. Thomasin joins a coven, stripping her clothes and levitating above the treeline along with the other witches, and thereby actually becomes what her parents had accused her of being. It's unclear however what transformation they most feared: her metamorphosis into something supernatural, or her development into a sexual being, marked by physical changes like the development of breasts, body hair and menstruation.

As Stacey Schiff wrote in"The Witches," her history of the 1692 Salem witch trials, "There's something about teenage girls, coming into their sexual lives and coming into their power, that Americans consider scarier than Harvard-educated magistrates who accept accounts of women flying through the Boston night."

Puberty is the embodiment of fear for others in Thomasin, which she eventually embraces. But in "Saint Maud," Maud herself is the one actively visiting physical horrors on others and herself on her path. The tensions between patient and nurse come to a head when Maud learns of Amanda's relationship with Carol (Lily Frazer), a young woman she met online for a final fling. Maud fears that Amanda's salvation, as well as her own, is in peril and intensifies her proselytizing, until finally Amanda has had enough.

"Maud, [God] isn't real," Amanda deadpans at an extravagant house party surrounded by her artist friends. Maud, in turn, snaps and strikes Amanda across the face. It's a sharp flicker of a rage that illustrates what viewers have come to suspect; pulsating beneath Maud's ascetic exterior is an unbelievable amount of hidden agony that, when it reaches the surface, often manifests as increasingly intense mortification of the flesh and capacity for violence.

Self-flagellation has a long history in Roman Catholicism, a religious tradition where impurity and penance go hand-in-hand. Maud is plagued by memories of her hedonistic past and as such she pursues the New Testament command "let him deny himself, take up his cross daily and follow me" to the fullest extent.

What distinguishes the body horror in "Saint Maud" from other films is that she personally tries to use it to catalyze a spiritual transformation. Blind, but passive faith isn't enough for Maud to feel connected to God. She needs to actively feel it. Maud claws at her skin and eyes, and uses a bed of hard corn kernels as a prayer mat, letting the sharp edges dig into her knees as she kneels in front of a crucifix. When that isn't enough, she fashions beds of nails out of a shoe sole and sticks them in her sneakers.

Maud slips her feet in her shoes, stands up and screams, a mix of torment and ecstasy, but is almost immediately subdued. She goes for a walk through the resort town, blood seeping from her soles. Maud claims that she can feel God inside her, that her body is a vessel.

There's a level of nuance inherent to "Saint Maud" that's absent from many other horror films because Glass blurs the lines for viewers between Maud being surreptitiously possessed by something otherworldly and her seeking out that possession deliberately. Her increased surrender to the divine, which at one point results in her levitating  — back arched and head tossed back — is both an escape from and a reminder of her fears surrounding her sexual urges.

When her faith is tested in extraordinary fashion at the end of the film, Maud prepares for one final transformation. She calmly walks to the beach, douses herself in acetone and self-immolates. We're presented with one view initially, of Maud's body consumed by flames. Then a second: Maud glowing, with wings outstretched. She's shed her physical body and fashioned herself a martyred saint. She's a final girl of her own making.

"Even if you're not religious, you can connect to that idea of wanting to feel like a part of something bigger than yourself, transcending your body in some way," Glass told the British Film Institute in 2019.

In a telling scene early in the film, Maud confides in Amanda that her patron saint is Mary Magdalene, the woman to whom Jesus first revealed himself following his resurrection. She's a deeply important character in Christian theology, but her legacy was marred by the early church's leaders who portrayed her as a "sinful woman," a prostitute who met Jesus, repented of her sins, and poured oil on his feet as a gesture of penitence. Despite the esteem she obviously held in the eyes of Christ, she was still defined for ages by her sexual history.

Underpinning "Saint Maud" is a serious question: Regardless of how she manipulates and mortifies the flesh, can a woman ever really transform herself into something greater under patriarchal leaders who view her sexuality as a spiritual liability? Both Thomasin from "The Witch" and Maud exist in societies where their autonomy is considered either sinful or supernatural. As such, it's a welcome contemporization of the horror formula that they are the ones embracing and, at least in part, generating their own transformations.

"Saint Maud" is currently in select theaters and will be available on Epix on Feb. 12.