From Monica Lewinsky to Paula Jones, "Impeachment" shows how testimonies are used to humiliate 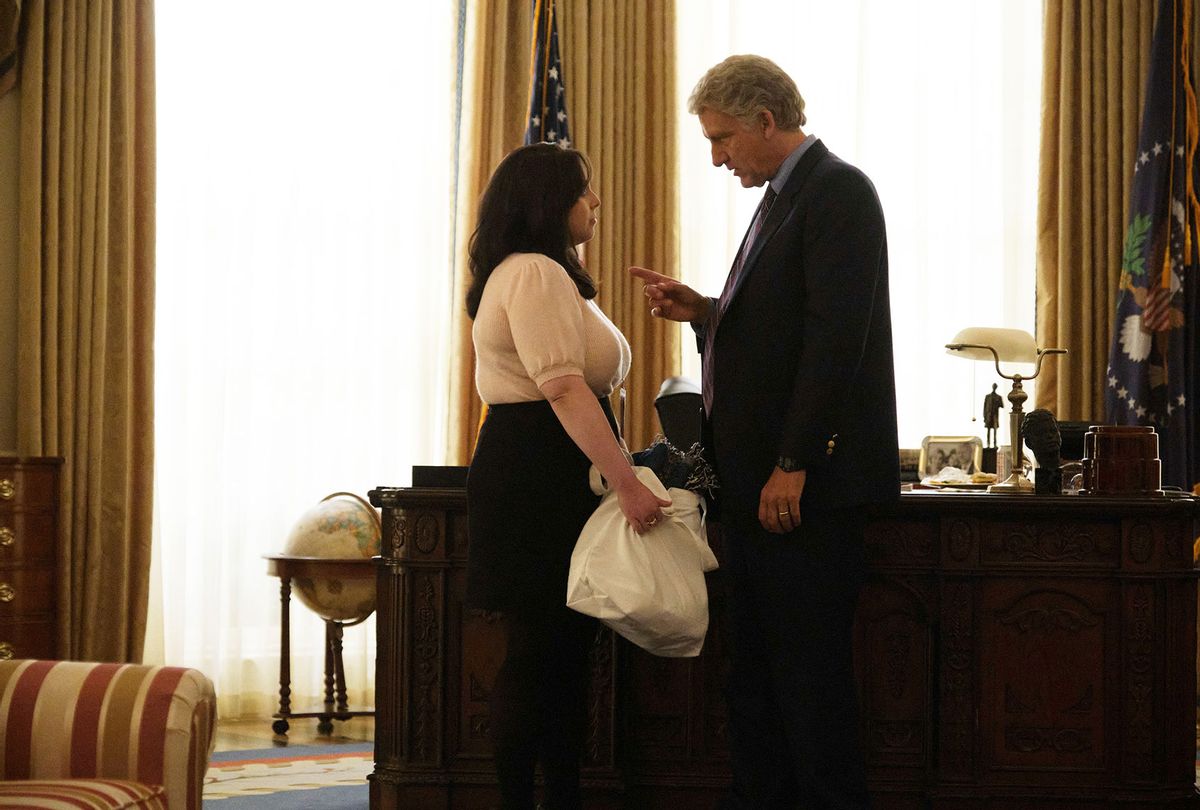 Things are starting to heat up on "Impeachment: American Crime Story," FX's dramatized retelling of the story of Monica Lewinsky and the Clinton impeachment. Paula Jones' sexual harassment lawsuit against Bill Clinton (Clive Owen) is now fully underway, and the FBI is investigating Lewinsky (Beanie Feldstein) with help from her former confidante, Linda Tripp (Sarah Paulson).

While "Impeachment" is foremost the story of Lewinsky and the devastating aftermath of her affair with the president, it's also a story of women and power more broadly. In the latest episode, the Jones lawsuit, and the treatment of the numerous women who have been harmed by Clinton and are roped into the suit, present a stunning example of this.

At Jones' deposition, which begins with Jones (Annaleigh Ashford) swearing to tell the truth, a Clinton lawyer asks her a rapid stream of deeply personal and embarrassing questions, ranging from whether her husband was her first sexual partner, to whether Clinton had actually "forced" her to kiss him or give him oral sex, to whether she had once given oral sex to three different men at a party in 1987. The insinuation here is that because Clinton "asked" for sexual favors rather than "forced" Jones to perform them, his actions weren't sexually inappropriate. Furthermore, Jones' supposedly sexual past is brought up to deny her any credibility in matters of consent.

Once the deposition is over and Jones is outside with her adviser, the self-titled "conservative feminist," anti-abortion activist Susan Carpenter-McMillan (Judith Light), Jones expresses her shock at what just happened.

On both sides of Jones' lawsuit, she and other women are treated as little more than political pawns. No one with power on either Jones' side of the suit or Clinton's is particularly interested in the comfort and safety of the women involved. This becomes especially clear as we watch how men in power weaponize subpoenas, affidavits, and depositions to force or coerce female victims to relive traumas, and publicly slut-shame and humiliate them, pending their agendas.

Throughout "Impeachment," Carpenter-McMillan and her powerful, conservative allies have been pushing Jones to move forward with the lawsuit rather than accept a settlement, which would have ended this painful theater. They're happy to subject her to public shaming and humiliation to attack Clinton and advance their own political agenda. They see Jones, and all the other women being pulled into the lawsuit, as expendable tools, collateral damage.

"These are ruthless, terrible people," Carpenter-McMillan ironically says of the Clinton team, "but they are not going to win. They have no idea how hard it's about to get for him."

In order to give Clinton a hard time, however, more women must be put through the wringer like Jones. Shortly before we see Jones' deposition, private investigators working with her legal team contact another woman they want to weaponize for their own agenda. Juanita Broaddrick (Ashlie Atkinson) had also accused Clinton of sexual assault, and since, her name has often been dragged through the mud, as she's accused of lying due to her conservative politics.

The investigators on her doorstep are more than aware of what will happen to Broaddrick if she comes forward to the world, and still push her to tell them her story. Clearly distraught, she says, "It's the past, I don't want to relive it, I'm sorry." Not taking no for an answer, the male investigator tells her, "If you don't talk to me and Bev here, those attorneys will subpoena you, do you understand that?" It's a short, harrowing exchange that offers a glimpse into the ways our legal system and procedures deny victims any privacy or agency, and even threaten them to either retraumatize themselves or face the force of the law.

At the end of the episode, Tripp's betrayal of Lewinsky is finally coming to a head. Tripp has told the story of Lewinsky's affair to a powerful DC literary agent and Newsweek journalist, and now, she's working with the FBI in exchange for immunity for the crime of nonconsensually recording her phone calls with Lewinsky.

Wearing a wire from the FBI, Tripp seeks to record a confession from Lewinsky that she lied in an affidavit, denying that she had a sexual or romantic relationship with the president, as well as a confession that she lied in exchange for a job at Revlon set up by the president's fixer. With this recorded confession, Lewinsky can now be threatened with charges of perjury and obstruction of justice — solely for being a young woman who was taken advantage of by the most powerful man in the world, and had the audacity to want to keep her private life private.

The consequences for perjury and obstruction of justice could be years in prison. Historically, we know that for 12 hours Lewinsky was detained and interrogated by the FBI in a hotel room, where she was threatened with prison time if she didn't disclose the intimate details of her private sexual relationship to a room full of men. The agents in charge of interrogating Lewinsky notoriously called the task "Operation Prom Night," as a wildly inappropriate reference to time alone with a young woman in a hotel room.

Unfortunately, the treatment of Lewinsky, Jones, Broaddrick and the other women pushed to be involved in the conservative, anti-Clinton conspiracy, isn't an aberration. Trials involving rape, domestic violence or sexual misconduct often unfold in a similar fashion.

In 2016, during one of the most famous trials involving sexual assault in modern history, Brock Turner was often sympathetically referred to as the "Stanford swimmer" with infinite potential. In contrast, Chanel Miller, the woman he was convicted of assaulting, was the one who was treated as if she were on trial. She was asked questions about how much she drank, what she ate for dinner before the assault, and other questions suggesting the encounter had been consensual and she had cheated on her boyfriend.

"Impeachment," at its core, has always been a story of sex, power and politics. The invasiveness and cruelty of the legal proceedings against Jones, Lewinsky, and Broaddrick present a grim reality that speaks to why so few survivors come forward to law enforcement. This is the only path available for those who feel victimized in the legal system: one in which the alleged victims have everything to lose and almost nothing to gain from coming forward — especially if the person they're accusing of abuse or harassment is someone like the president of the United States, with the power and resources to dig deep into their pasts and ruin their names forever.