In the final analysis, "Ted Lasso" is all about a man, a team and their daddy issues 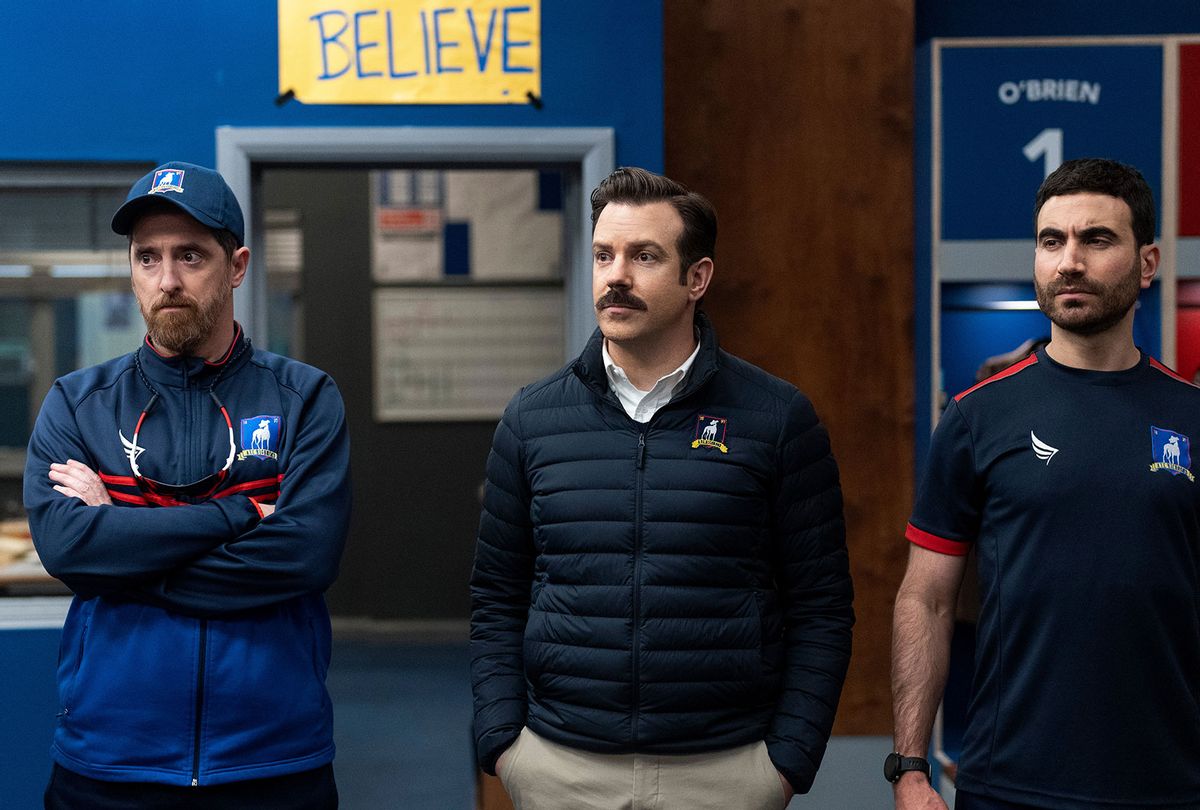 "Ted Lasso" is apolitical by design. Jokes about the prime minister or America's president are out of bounds for the same reason the script doesn't acknowledge the pandemic: like its title character, the show is a people pleaser. Fulfilling its role as a place of pure uplift in a downer of a time, it does all it can to levitate above the morass of negativity that is 2021, reality edition.

And yet, one cannot ignore the fact that it is also the product of a time crushed into a jagged crystal by a petulant authoritarian whose sociopathy is attributed to a distant, aggressively prejudiced father he could never satisfy.

Jason Sudeikis may not have been thinking about that specific goon when he wrote the second season finale, "Inverting the Pyramid of Success," or mapped out the stories leading up to it. But if he and the show's writers had bullies on the brain when they sat down to break the season, that may be because we've been living with one for half a decade.

In any case, now we know what members of the cast meant when they hinted that this season was inspired by "Star Wars Episode V: The Empire Strikes Back."  They weren't talking about the rebels suffering a setback; since AFC Richmond was already relegated and lost their team mascot in the premiere, the only way to go was up. Which, in the final episode they did, rising from relegation to promotion.

Besides, people don't remember "Empire Strikes Back" as the story of which team was ahead. "No Luke – I am your father" – that's what we remember. "Empire" may start as the tale of the Rebels on the run, but ultimately it's about an abandoned son whose father finds him. Unfortunately for that son, his dad happens to be one of galaxy's evilest men. And with those words, Luke Skywalker is given the choice to inherit that sinister mantle or leap into the unknown.

Anyway, it's a better reference than calling the latest episodes the Daddy Issues season, even if examining the relationship between fathers and their children is a natural extension of the show's mission to be a rebuttal to toxic masculinity.

Other more obvious parallels to "Star Wars" came to the fore in the relationship between Ted (Sudeikis) and Nate (Nick Mohammed), the former kit man that Ted elevated to assistant coach in recognition of his natural talent as a strategist. But Ted isn't Darth to Nate's Luke – he's the Obi Wan to the younger man's Anakin. A mentor, not a father.

And Anakin never had an emotionally distant dad like the one we meet Nate's in "Rainbow" and "Headspace," who never affirmed his son's accomplishments and only amplifies his insecurities.

Ted's endless positivity and willingness to choose understanding over punishment is Sudeikis and his co-creator's main antidote to macho aggression – but, as we saw with Nate's heel turn and the backlash against the show's unapologetic kindness in Sreason 2, light and joy can only achieve so much.

We needed Ted's vision in 2020, to ride with a guy who had been knocked not down but all the way out across the ocean. There was something noble and magnificent in Ted's insistence upon healing everyone before himself, in assuring that everything is possible if people simply believe.

That was always a palliative, not a fix – and "Ted Lasso" acknowledges this, I believe. In the first season a few keen-eyed viewers noticed, while the rest of us were floating on rosy clouds, that maybe Ted isn't perfect. If he's so wonderful, why did his wife want a divorce? His "Empire Strikes Back" arc, as it were, was to head into the darkest place in the swamp and face the part of him that hates.

Still, there's healing to be done – on Ted's side, and on nearly everyone else's part too. AFC Richmond is a crew of beloved sons and daughters alongside father survivors, some whose dads were simply flawed and others who were raised by very selfish, abusive, worthless jerks – like the lowlife who beat Jamie Tartt (Phil Dunster) into a champion and an emotionally stunted prick.

Team owner and devoted den mother Rebecca (Hannah Waddingham) is only starting to heal from the psychological wounds inflicted on her by a philandering father who cared nothing for her feelings or her mother's.

All we know about the man who fathered Roy Kent (Brett Goldstein), according to Roy, is that he's racist. But Roy pours so much passion into being a solid father figure to his niece, and a perfect mate to Keeley Jones (Juno Temple), that presumably compensating for some kind of parentally inflicted damage. And his inability to allow Keeley to enjoy her power is a sign of that even great men must be works in progress.

Tellingly Sam Obisanya (Toheeb Jimoh) has a loving relationship with his father. Bearing witness to his bond with Sam is what moves Ted to welcome Jamie back from exile; he explains to Beard that Jamie's problem is that he never had a decent father figure. (What nobody expects is for Roy to fill that role.)

Then there's Ted, a man who offers nothing but kindness and good humor to the world and is ready to insert himself into his friends' problems, but nearly explodes when Dr. Sharon Fieldstone (Sarah Niles) correctly deduces that his eagerness to ingratiate himself to others is as shield prevent people from seeing his weakness. But that emerges in the form of panic attacks, one at a pivotal game.

So when Nate betrays Ted's confidence and leaks a story about Ted having such an episode to The Independent, hoping to shatter the upbeat, forgiving nature that is central to The Lasso Way, he's stupefied when it backfires. Coach Beard (co-creator Brendan Hunt) and even fellow assistant coach Roy Kent (Brett Goldstein) know Nate turned on Ted and almost expect Ted to, well, strike back.

Ted's refusal to do so is an even graver insult to Nate than Roy not caring that he kissed Roy's girlfriend Keeley (Juno Temple). So midway through a game Richmond seems about to lose, Nate unleashes on Ted.

"You made me feel like I was the most important person in the whole world, and then you abandoned me. Like you switch out a light, just like that," Nate spits at Ted, tears in his eye. "And I worked my ass off, trying to get your attention back. To prove myself to you, to make you like me again. But the more I did, the less you cared. It's like I was f**king invisible."

Ted didn't do any of those things, of course – and we see that Nate isn't yelling at his boss, or his friend. He's screaming at the father who refuses to see him.

Ted's father, the one who took him to play darts and inspired him to be curious, also died by suicide. Ted's panic attacks come from a place of failing to reconcile himself with the notion that the same man who taught him how to be gracious and good could also have been in so much pain that chose to end his life and left his son to find his body.

The overt message of these episodes is one of promoting mental health and wellness, along with endorsing the value and virtue of being in touch with one's emotions. As ever, though, this season of "Ted Lasso" speaks to us on a level beyond simply making us feel good or asking us to get in touch with our vulnerability. It reminds us that in the same way that good fathers and men make us #Believe and desire to be our best, villainy is a choice.

This was Luke Skywalker's epiphany after surviving the events of "Empire," and it's one Nate is playing out, only on the team dark side as a fully silver-haired Sith, working under Rebecca's ex Rupert (Anthony Head).

It's also a truth we're wrestling with on a national and global scale. The split widens between people who see compromising and collaborating for the common good as the only winning strategy against loss and decline, and those who resent being asked to contribute instead of being applauded for standing apart.

Then again, Sudeikis would probably shrug as he did with this previous season and simply claim he was telling a story – and not one that concerns a former world leader who had a crooked father and shows no signs of breaking that cycle.

"Ted Lasso" comforted us it first season. That much is beyond debate. But perhaps its second is meant to wake us from that respite and remind us that everything isn't OK while assuring us that, with effort, we can be OK.

And if this is in fact "Episode V," that's good news for Ted and AFC Richmond because in the next movie, the enlightened good guys win. . . but not before coaxing one lost soul back from the dark side.

All episodes of "Ted Lasso" are now streaming on Apple TV+.