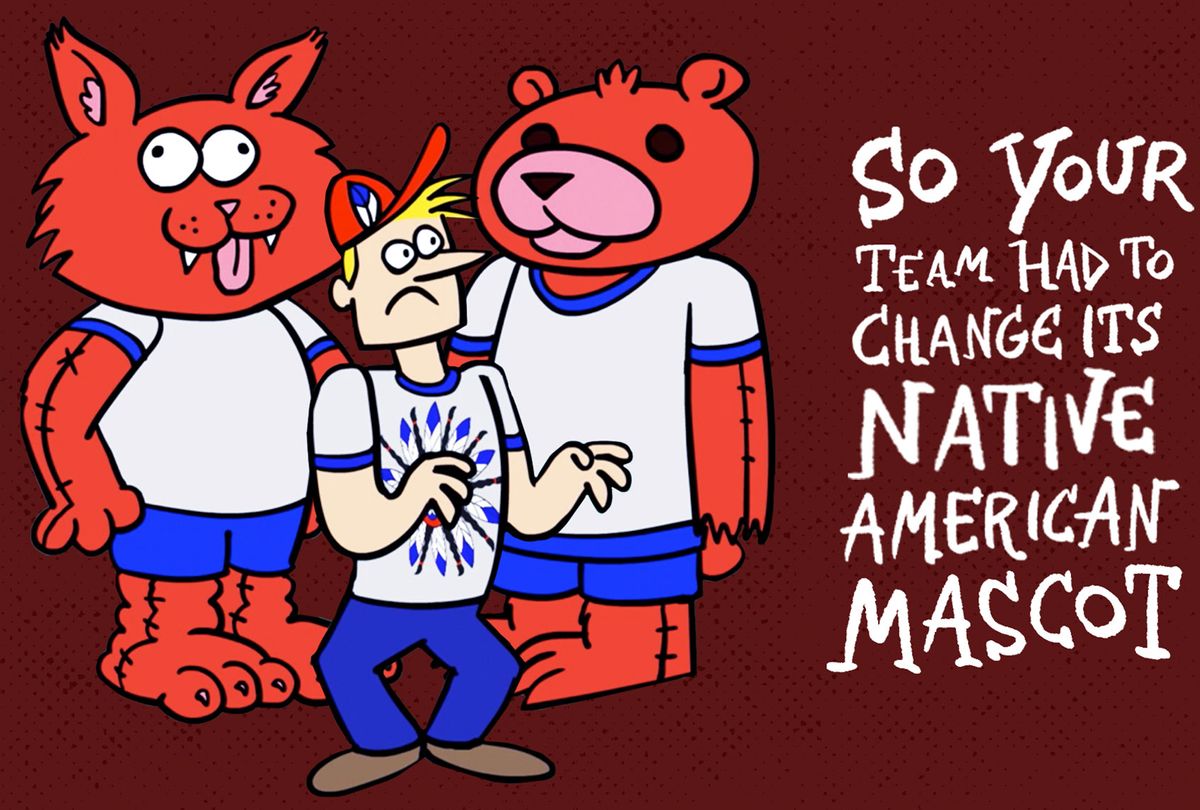 "So your sports team had to change its name and/or mascot because it was offensive to Native Americans . . ."

So begins a new Comedy Central short titled "How to Cope with Your Team Changing Its Native American Mascot," released ahead of Indigenous Peoples' Day and just days before the Cleveland MLB team's last game under their old name on the way to becoming the Cleveland Guardians.

The satirical animated short film is written and narrated by comedian Joey Clift, an enrolled member of the Cowlitz tribe who grew up on the Tulalip Indian Reservation. Clift, along with an all-Native voice cast, offers cheeky solutions to fans who may miss performing the Tomahawk chop or wearing redface.

Sure, Clift gives advice in "the silliest way possible," but he notes that the angry animated fans and their questions seen in the short drew from a "potpourri of actual experiences that I've either had or witnessed online." Even when fans are understanding of the need for change, using mascots and team cheers was perceived by many as an act of honoring the past — navigating the future without these cues has left some fans unmoored, and yes, upset.

"How to Cope with Your Team Changing Its Native American Mascot" lightens the mood around the issue while still emphasizing the importance of Native people's right to just be people (who may or may not love cats). Take a look:

Thankfully we're increasingly living in a post-Native mascot world. In addition to the Cleveland Guardians, we now have the Washington Football Team (ironically playing the Kansas City Chiefs – who ditched the mascot but kept the name – on Oct. 17). And at the direction of the NCAA, several college sports teams have changed their Native names and mascots in recent years in response to years of criticism and Native-led activism.

"I get that having a thing that you like change suck," said Clift. "The changing nature of sports mascots is seen as this ruining of local heritage, because your high school is changing its mascot. But it's weird to see people embracing a Native sports mascot that's only been a thing for like 60 years, while throwing away the heritage of the actual tribes and people that have been on that land for thousands of years."

This isn't about throwing away sports teams' treasured memories and culture, but simply that, as Clift says, "The team in 2021 is not representative of how Native people would like to be portrayed in this country."

Clift is one of many Native American people who had to grow up going to a high school with a Native mascot.

"This was in the early 2000s, and it was definitely a topic of conversation of the Native student body at my school, who really cared and protested and tried to get the team to stop doing the tomahawk chop," he said. "The non-Native student bodies largely didn't care. Now in 2021, my high school changed their mascot as of a month or two ago, and it's great to witness what we fought for so long, to finally get there."

This wave of change didn't come out of nowhere. Indigenous people have been protesting mascots for years, but Clift believes their activism finally gained mainstream visibility and support in the 2010s, amid the Standing Rock Dakota Access Pipeline protests that were taking place. "Up until that point, Native issues were largely ignored in the media," Clift said. "The Standing Rock protests basically forced people to pay attention."

This was especially true as atrocities and violence committed against Native protesters were widely filmed and shared online, sparking mass outrage and a reckoning with the enduring violence against Native people by the U.S. government.

That new awareness meant that the general public started paying attention to other ways the United States has treated Native issues, especially if it meant elevating colonizing narratives. Case in point, not long ago, the second Monday in October was referred to as Columbus Day, bizarrely honoring the Italian explorer who was responsible for enslaving and initiating genocide against untold numbers of Indigenous people across the Americas.

Now, not only is it more properly known as Indigenous Peoples' Day, but President Biden recently signed a declaration that this year, Oct. 11 would be a national holiday.

Of course, with all change come opponents to cultural shifts like this. As we've seen in the Comedy Central short, whenever Native people are able to reclaim something – whether it's mascots or holidays celebrating genocide – Americans suddenly are afraid that their deep-fried turkeys and green bean casseroles are next.

"When any sort of Native issue is brought up, people are just like, 'Oh, so now I can't celebrate Thanksgiving?'" Clift said. "That's not what we're talking about. We were talking about the government not taking Native people's land, their treaties. A lot of folks just have not educated themselves on Native issues."

This lack of understanding leads to tone-deaf practices, like celebrating the holiday with a "Cowboys versus the Chiefs" game. "It creates this weird genocide cosplay thing where we're celebrating the U.S. government's war with Native people via football," Clift said.

And circling back to mascots, familiarizing oneself with historical context makes it even clearer why we should prioritize Native imagery that's humanizing, rather than demeaning caricatures.

While changing sports names and mascots may seem like a big deal to fans, it's close to the bare minimum when it comes to addressing the harm done to Native Americans. But this could hopefully pave the way for making an even greater impact.

"It would be really great if the sports teams didn't just change their name, but also offered to start scholarships for Native students or donate to tribes whose land they're playing on to help them with the issues they're dealing with," Clift said. "Name-changing is an amazing first step. But it would also be cool if these teams were willing to give monetary compensation to tribes to actually help the healing process."

Clift cites numerous studies and research, including from the American Psychological Association, on the deeply harmful impacts of Native mascots on Native people, and especially youth, who struggle with low high school graduation rates and a Native youth suicide rate that's 2.5 times higher than the overall national average.

"When you only see yourself in the media as a racist caricature, and red face smiling or carrying a tomahawk, and not yourself in contemporary roles and modern society, it causes low self-esteem and it makes you feel like garbage," Clift said. "This is real damage that these teams have caused over decades."

It's time for wealthy sports teams to actively work to repair that long-lasting damage caused by such harmful imagery.

"Money can always help," Clift says, calling on teams that have changed their mascots to consider "donating large sums of money to Native-run nonprofits." As for sports fans who also want to be a part of the positive change we're seeing to undo the impacts of anti-Native mascots, Clift stresses the importance of watching and supporting the work of Native creatives, whose work is challenging the racist narratives these mascots have perpetuated for years.

"Instead of 'honoring' Native people by using us as sports mascots, I hope more people try to honor Native people by watching all these kickass Native TV shows that are coming out right now, and reading books by Natives, and getting actual Native perspectives on things," Clift said.

"Rutherford Falls," the Peacock comedy following two best friends on a neighboring town and reservation, was just renewed for a second season, and Sterlin Harjo's FX on Hulu series "Reservation Dogs," is also coming back for a second installment. Clift has his own show coming up. The Netflix animated series "Spirit Rangers," in which he is part of an all-Native writers' room, will begin streaming in 2022.

In the meantime, Clift will continue to not just amplify Native stories but also work on projects that employ Native creatives. His Comedy Central "Mascot" short features designs from Marie Bower, an Indigenous cartoonist, and an all-Native voice cast that includes Jana Schmieding of "Rutherford Falls," and John Timothy of "Spirit Rangers," among other Native comics and creatives. He also made the award-winning short animated film (with a long title), "Telling People You're Native American When You're Not Native Is A Lot Like Telling A Bear You're A Bear When You're Not A Bear."

The recent sports changes as well as the rise in Native storytelling in media have ultimately given Clift hope.

"It's through the work of all these activists for decades and decades, that I was able to make a comedy short for Comedy Central about Native sports mascots changing — and not as something that we're begging the general population to pay attention to, but something that's just known as problematic," he said.