"Reservation Dogs" creator on evolving the show's representation & storytelling: "It's not finished" 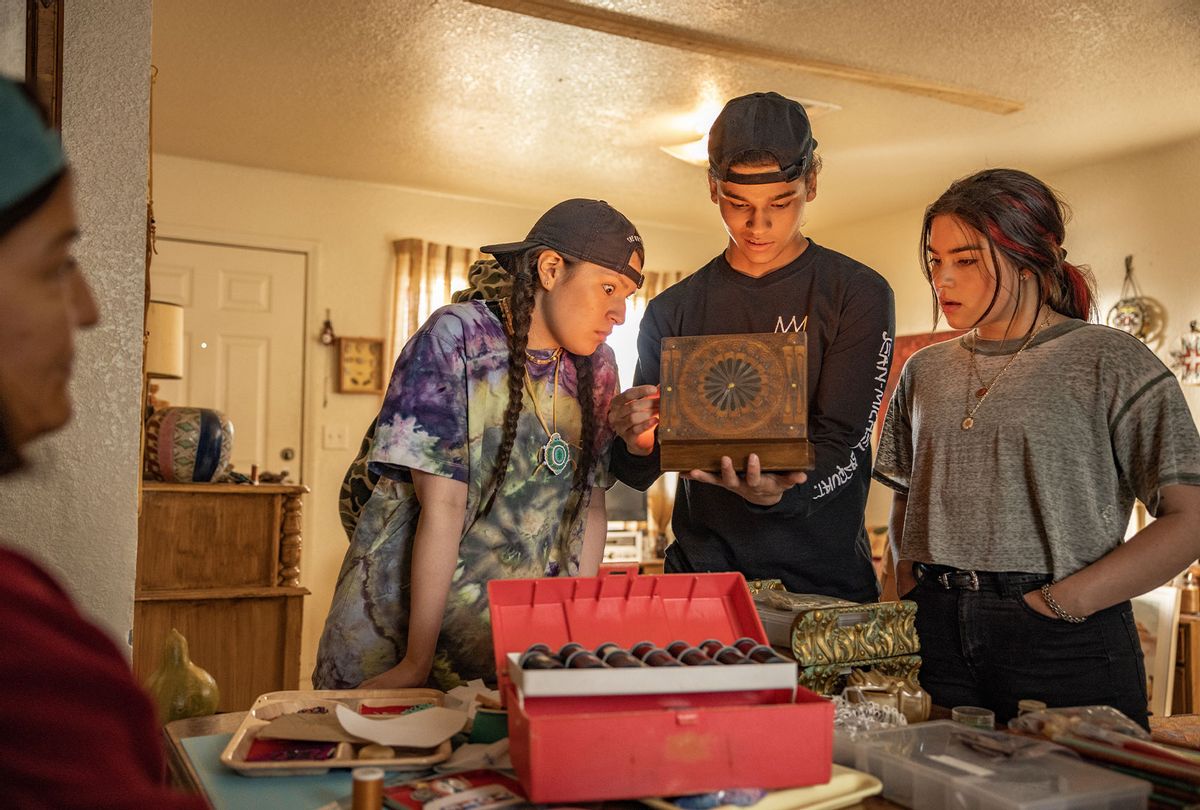 Sterlin Harjo's journey to becoming a filmmaker began with watching movies with his father, when he was a kid growing up in Holdenville, Oklahoma. His family wasn't rich, but his dad's friend worked at the local cable company and got them HBO.

"We just devoured those movies, and they had a profound influence on me," the "Reservation Dogs" co-creator recalled in a recent conversation. "When you're from a small town, you gravitate towards pop culture. And it kind of helps you. It's like mythology, right? It's like, cinema is our form of storytelling and mythology, and it helps inform how you handle conflict, and how you move through life."

Harjo's coming-of-age in the 1990s informs the "Reservation Dogs" world. The title may be a nod to Quentin Tarantino's era-defining flick, but the mood he, co-creator Taika Waititi  and the writers braid together contains threads of everything '80s and '90s cinema: from "Platoon" to "Friday," from "The Goonies" to "The Lost Boys."

But coming of age stories like "Stand By Me," "Rumble Fish," "The Outsiders," and "Boyz n the Hood," films where the young heroes face darkness, most directly influence the first season. When you understand that, you get why the title is also a misdirect.

It implies that Bear (D'Pharaoh Woon-A-Tai), Elora Danan (Devery Jacobs), Willie Jack (Paulina Alexis) and Cheese (Lane Factor) are a band of thieves or even vigilantes, that people think they're cool. All that is wishful thinking.

Bear can't fight. Willie Jack and Cheese just want to hang out. Elora Danan is the one among them who has enough ambition to realize their California dream, but that mission floats on an ocean of unresolved sadness.

Their adventures form the heart of the show, Harjo said, "but [it's] also about living life, and kind of how pop culture helps sort of guide you through this life, through the darkness. And that's an escape, right?"

But for millions of people who watch those '90s classics and don't see anyone who looks like them on-screen, it's also an arrival.

Indigenous teens don't have a "Stand By Me," or popular movie comedies devoted to illuminating their experience. When FX greenlit "Reservation Dogs," Harjo and Waititi seized the opportunity to create their own coming-of-age stories. This time Indigenous young people get to be the ones making us laugh, cheer or cry, in a story produced by an all-Native writers' room.

This matters, of course. What resonates with the audience are the show's universally relatable themes of impatience and youthful naiveté, and our first experience with massive loss experienced anew through these characters.

"I love storytelling from underrepresented communities," Harjo stated. "I love storytelling. I love foreign cinema. I love European cinema, I love Latin American cinema. I don't know, I've always just been a person that absorbs all of this work, and with 'Reservation Dogs' I found a way to really express the love for those versions of storytelling and cinema through the point of view of these kids."

In telling the story of four teenagers living in a rural Oklahoma town, "I wanted to basically shout out and give homage to a lot of these influences," Harjo explained.  "It's like the Wu Tang clan, you know? They gravitate towards ideas that aren't necessarily their experience. But there are things that they identify with in those experiences. So really, when making the show, I was like, 'Let's pull these influences, and kind of give homage to all of them.'"

"What I hope that 'Reservation Dogs' does is open the world up to telling different types of Native stories," he added.

The FX on Hulu show is not the first comedy about an Indigenous community to debut in 2021, mind you. That honor goes to "Rutherford Falls," which was co-created by Sierra Teller Ornelas.

However, "Reservation Dogs" is decidedly centered on the lives of its Indigenous characters. Its white characters are the ones flitting about the periphery for once, displaying a comical ignorance of their Indigenous neighbors while living beside them.

Its popularity may be additionally helped by the fact that the cast includes familiar actors like Zahn McClarnon and Gary Farmer, who have appeared in dozens of movies and TV projects, but rarely as the star or in a comedic role.

What these very different comedies have in common is that they honestly portray parts of the country few non-Natives visit, and far too many still stereotype or romanticize.

Harjo's and Waititi's reverence for cinema also gives "Reservation Dogs" room to incorporate mythological figures like Deer Lady (Kaniehtiio Horn) and treat them like mundane figures, part of the local color, in the same way Jim Jarmusch might.

Mentioned just as frequently in conversations about "Reservation Dogs" is the concept of representation, a term slung across the shoulders of any pop culture "first." Whether that designation is a badge of honor or places an unfair burden on those creating the art in question depends on situational context. And Season 1 of "Reservation Dogs" got it from both sides.

The very element that earned the show critical acclaim attracted passionate, angry criticism, which is the script's assumption that popular culture is a common language transcending race and socioeconomic status. Our love of movies is part of that, but another artform wedded to the show's overall feel is music, hip-hop specifically.

"When you have a culture where their identity has been stripped away through genocide . . . hip-hop was there to help us with our identity, I think," Harjo said. "So it has a profound effect in Native communities because it wasn't white. And there's something very punk rock, very 'standing up to the man' about it. That's something that we identified with and needed to do ourselves."

Through this mash-up of music and film touchstones "Reservation Dogs" steeps the audience in the uniqueness of its Oklahoma community and the range of personalities that make the place unique.

Bear, for instance, is haunted by a sense that he has a mission and a destiny, and by the spirit of an ancestral screw-up who shows up at inopportune times to nag him. Bear's ghost friend may be real or a manifestation of his shame about his aimlessness or both. He's definitely funny.

Another specter hanging around Bear, and Elora Danan, Willie Jack and Cheese, is the loss of a close friend who died by suicide. Each is still grieving, and anyone watching can relate to the way tragedy can taint a place that already feels small. It's no accident that all great coming of age stories are about escape.

But neither FX nor the people making "Reservation Dogs" foresaw the backlash resulting from an episode about Bear and his mother Rita (Sarah Podemski) featuring Bear's deadbeat dad, a rapper named Punkin' Lusty played by Native hip-hop artist Sten Joddi. Punkin's song "Greasy Frybread" is a hit in the show's version of Indian Country.

But on social media it became a magnet for accusations that the character and the series itself are anti-Black. The critique extended to the opening scene of the premiere where the kids steal a delivery truck from a Black driver causing him to lose his job.

Bear and the gang find this out at their favorite spot, a local joint that has the best catfish in town and is co-owned by a Black man named Cleo (Darryl W. Handy).

Afro-Indigenous people are part of Native communities around the country and have a significant presence in Oklahoma, where the show is shot. So does hip-hop. In fact, Harjo created the characters of Mose and Mekko for underground rap artists Lil Mike and Funnybone.

Viewers pointed out that the driver and Cleo are the only Black characters featured with any prominence in the first season, and compared to Mose and Mekko, receive only a few lines and negligible screen-time.

But that furor is auxiliary to the anger stoked by "Greasy Frybread," Punkin' Lusty and Joddi, a guest star who appeared in one episode. In 2014 Joddi shared social media posts using the N-word and an image that likened Beyonce to Goldar, the "Power Rangers" villain with an ape's face. He deleted the posts, but not before they were screen captured and widely shared.

Joddi posted an apology on Twitter afterward and announced that he will not be appearing in the second season of "Reservation Dogs. " FX confirmed this to Salon in a statement shared on Sept. 17.

"We were recently made aware of past racist comments by Sten Joddi and we condemn those comments in the strongest possible terms," the statement reads. "We are glad he has taken responsibility and apologized for his remarks, and we are encouraged that he is going to take the necessary steps to better educate himself."

Joddi's departure doesn't necessarily fix the other criticisms, some of which are valid – specifically, the show's lack of Afro-Indigenous characters.

But others aren't fair or misinterpret the intent behind certain scenes. For example, Bear's guilt over wronging the man who drove the truck he helps steal incites a realignment of his moral code. Admittedly, on any other show lacking characters of color this contextualizing would not be a sufficient excuse; it makes lead character's personal growth contingent on a Black man's suffering.

Nevertheless, one wonders why this show is such a lightning rod for anger when other ensemble comedies lacking non-white characters or featuring a few underdeveloped ones haven't been criticized nearly as vociferously. (Does "Rutherford Falls" get a pass because the story features a Black mayor whose defining trait is competence? Or because people hold Teller Ornelas's fellow co-creators Ed Helms and Michael Schur to a different standard?)

"Reservation Dogs" is getting a second season, giving it a chance to expand and evolve. The good news is that it was already a great show. Now it can be even better.

Season 1 necessitated establishing the audience's connection to these characters and life on this reservation, a part of American culture few non-Natives experience on a regular basis. That means spending lots of time with the central characters.

That's what the show did: beyond the pilot and the finale, five episodes out of the eight focused on each of the main characters and their family, with Cheese's story expanded alongside that of McClarnon's rez cop and Farmer's recurring character Uncle Brownie receiving his own adventure. That left one half hour for the writers to lean into the comedy of the 'hood purely for its own sake.

Harjo planned for a 10-episode first season but the eight he was given required him to remove episodes that weren't directly involved in furthering the action, including the story of their catfish spot, one of the centers of the foursome's existence, and its owners Rob (Macon Blair) and Cleo (Handy).  He says he's excited to bring that script back next season.

"It's hard sometimes because I can't represent everyone. And, you know, we try to tell a good story," he explains. "You don't go into telling a story by saying, like, 'I'm gonna be representing Native America like it's never been represented before.' That wasn't the point. The point was just telling a real, truthful story."

He acknowledged the weight of that, along with the excitement of knowing the finale "Reservation Dogs" isn't the end of our time with Bear, Elora Danan, Willie Jack, Cheese and the wider rez community.

To make his point he returns to the realm of movie memory. "When you get to the end of 'Stand by Me,' and everyone's walking away, and the voiceover is talking about what happened to everyone, and everyone is disappearing, there's beauty in that. There's sadness. That's not how this season ends. It's a finale, but it's not finished. It feels like the beginning, honestly."

The entire first season of FX on Hulu's "Reservation Dogs" is currently streaming on Hulu.