The seasonal joy of "The Great British Baking Show"

Days are darker and the pandemic drags on, but our special relationship with Britain's baking hit keeps us warm 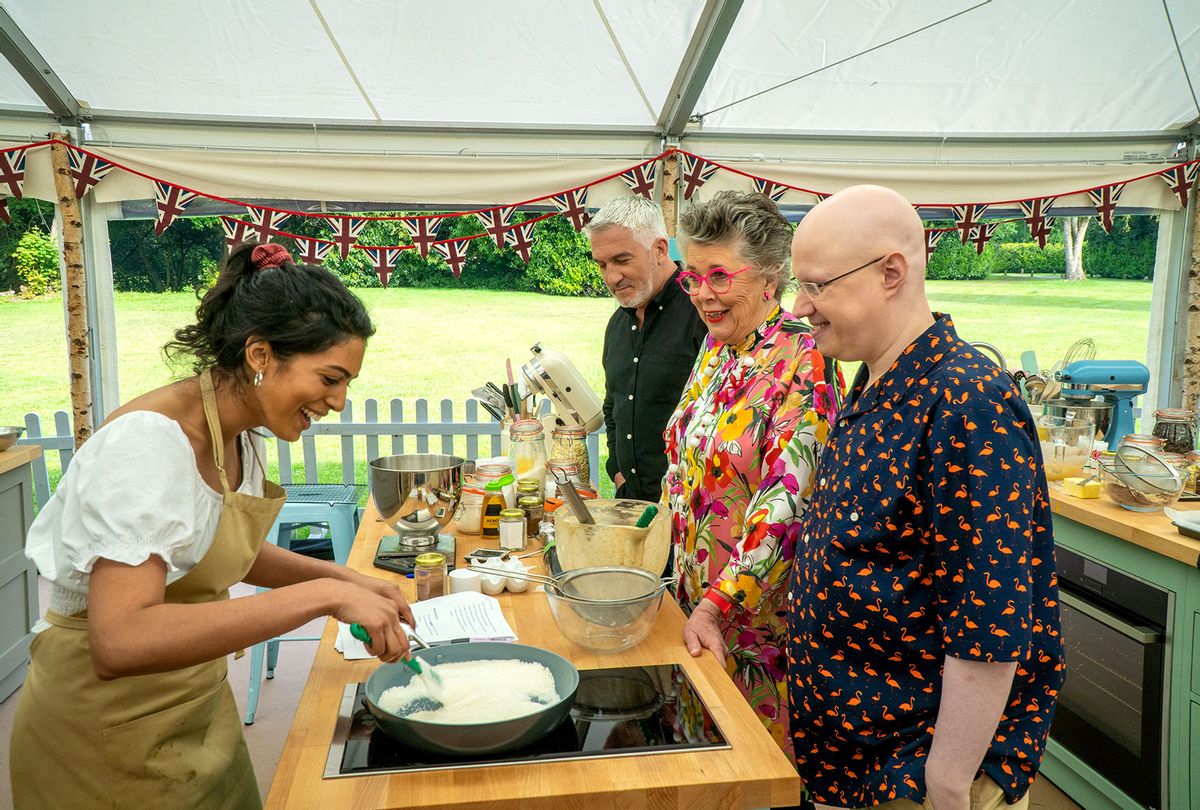 We are not where we once thought we would be. As 2021 wanes, the pandemic lingers along with conspiracy junkies. (You could even say because of them.) Many people remain in a quarantine mindset, reluctant to subject ourselves to large crowds and enclosed public spaces. Factor in the frustrating political gridlock and our culture's sustained divisiveness, and it's no wonder that everyone's feeling tired.

Then again, this week, "The Great British Baking Show" taught me what aquafaba is. I had no clue the chickpea-based egg white substitute existed until 19-year-old contestant Freya busted it out to make a beautiful pavlova. Freya is committed to competing in this round of the so-called "GBBO" (an acronym of its U.K. title "Great British Bake Off") using only vegan ingredients, which is noble, fascinating, and something I may never do.

Doesn't matter. Challenging the audience to do anything seen on "The Great British Baking Show" is never the point of it. The shows inspires people — otherwise we wouldn't be heading into the show's 12th season. But it doesn't necessarily move us, the viewers, to do anything more than appreciate a domestic pursuit underappreciated or even deemed unnecessary by some in our age of store-bought breads and desserts.

For this reason, my loyalty to TV's sweetest thing remains firm. Last year's national obsession with mixing up quick breads and sourdough may have waned, but the delicate, bright theme of "GBBO" still floods the system with serotonin like a sturdy feel-good treat should.

"The Great British Baking Show" may be unique in that regard, but it is by no means a one-of-a-kind show. Netflix has a few showstoppers starring cooking and crafting, with its newest addition being "Baking Impossible."

"Baking Impossible" is not a spinoff, although it builds a bridge to "GBBO" audiences by way of recruiting 2016 finalist Andrew Smyth as one of its judges. Otherwise, it is closer in resemblance to Food Network's competition classics, with a color saturated set reminiscent of "Nailed It." This new show doesn't revel in disaster, though. It seeks innovation. Bakers pair up with engineers to create "bakineer" teams challenged to create delicious and functional confections.

By sparking the brain and enticing the stomach, "Baking Impossible" is already a slice above "Baker's Dozen," another recent entry (on Hulu) that knocks off the "GBBO" baking tent and mixes it with American muchness. Each episode welcomes 13 bakers, some pros, some hobbyists. Each episode crowns a winner, with new sets of contenders arriving in the next segment.

You may already understand why that doesn't work, but let's allow that to rest so we can further sift through the virtues of "Baking Impossible."

In episode one the duos collaborate on boats have to sail as well as prove irresistible to the palate. From there it's a step up to robots rendered in motorized cake, frosting and fondant. Combining the mechanical and edible creates a fascinating level of unpredictability. You never can tell if the prettiest things are going to be practical, or if a geared and wired creation also passes the experts' taste test.

Joining Smyth at the judges table are chef Joanne Chang and Dr. Hakeem Oluseyi, an astrophysicist. They're all delightful, supportive and as generous with their plaudits as they are gentle in conveying disappointment.

Those same qualities allow me to further appreciate the impeccable layers "Great British Bake Off" judges Paul Hollywood and Prue Leith bring to that show, alongside hosts Noel Fielding and Matt Lucas. "Baking Impossible" episodes get the viewer's intellectual gears going, while "GBBO" is all heart. You watch it to get out of your head and into the radiant warmth of feeling.

We connect with these contestants, getting to know each of them as the pool steadily shrinks from 12 capable people who bake for the love of it down to three. This is a key ingredient "Baker's Dozen" fails to capitalize upon; it isn't enough that it mixes professional chefs with self-taught hobbyists. If we wanted that, we could watch any baking show on the Food Network or Discovery's streaming service.

None of this is new, but in 2021 "The Great British Baking Show" reminds me of the endless appeal of classics and the grace of relaxing into our mistakes. A contestant named Maggie deserves credit for reminding us of those qualities. This irrepressibly light-hearted retired midwife is a staunch fan of traditional bakes and laughs off every single failure. She's as genuinely delighted to be there as we are to watch her.

She's also just one competitor who touches a place within that is, as Prue describes one successful treat, familiar, comforting and lovely.

This is true even for people who have never touched a mixer; or, if you're like me, are well-acquainted with the oven, but too exhausted these days to rise to any occasion requiring one to turn it on. Watching the show's bakers strive to pull off gravity-defying cakes and coax forth extraordinary feats in fondant and food coloring is enough. When they succeed, it's magic. When they don't hit the mark, the world doesn't end. It's simply an unfortunate bake. There's a calming lesson in that.

"Baking Impossible" is impressive, certainly. But the inviting spirit of "The Great British Baking Show" is a consistent pleasure at the end of the week, uplifting the joy and warmth we can discover within our own spaces. You may not have the energy or desire to create that pandemic masterpiece each of us was supposed to bang out by now, but honestly: who cares?

Connecting to the universal generosity of baking and the pursuit of sweetness is much more accessible. You can do it by mixing flour, sugar, flavors and binders in the right proportions or, even better, you can watch others indulge in that activity for you ... without judgment.