Another Republican ensnared? Rep. Darrell Issa may be implicated in Fortenberry scandal

Longtime House Republican Darrell Issa — worth $250M — may have been target of DOJ sting over $30,000 donation 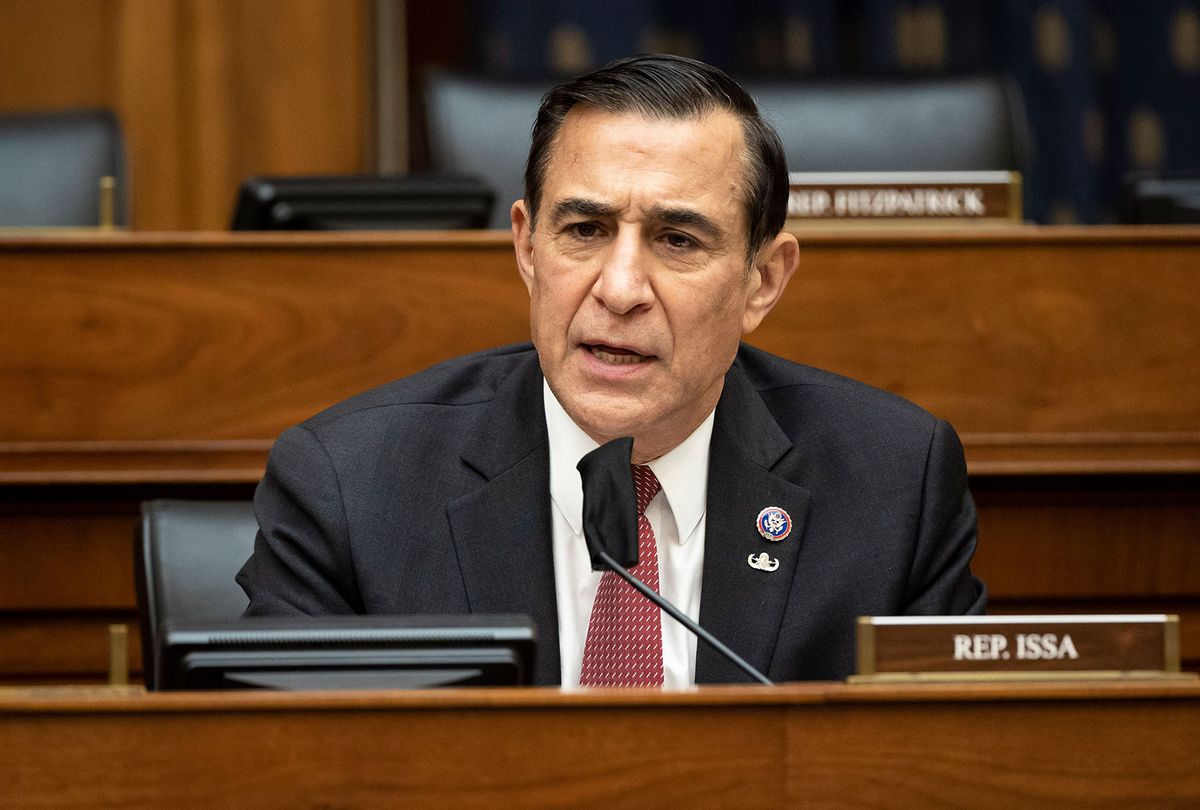 The federal case against Rep. Jeff Fortenberry, R-Neb. — who was indicted last month on charges of lying to federal investigators and concealing information about illegal campaign donations — appears to have ensnared another Republican congressman. The Department of Justice stated last week that a protective order was "necessary" in the Fortenberry case to protect "evidence related to sensitive and ongoing investigations, including those related to public officials."

One public official in question, who is identified in court filings only as "Candidate C," is Rep. Darrell Issa, a California Republican who is now the apparent target of a DOJ investigation — and may indeed have been the object of a sting operation. Issa retired from Congress in 2018 after serving nine terms from a Southern California district, but then moved to an adjoining district in San Diego County and was narrowly elected in 2020. The former CEO of an after-market auto accessories company called Directed Electronics, Issa has an estimated net worth of $250 million and is one of the richest members of the House.

On Sept. 10, 2014, Issa dined at the same table with Gilbert Chagoury, a shadowy figure identified as a "foreign billionaire" in the charges against Fortenberry, at a Washington event hosted by the group In Defense of Christianity (IDC). Two weeks later, Issa's campaign and the National Republican Congressional Committee received a total of $60,000 in donations, on the same day, from Dr. Elias Ayoub and his wife Mireille, an affluent Los Angeles couple who had also attended the IDC dinner. According to documents filed with the Justice Department, the $30,000 that went to Issa's victory fund actually came from Chagoury, a Nigerian citizen who may not legally contribute to federal candidates.

RELATED: Behind the Fortenberry scandal: Another member of secretive Christian network goes down

According to Deferred Prosecution Agreements (DPAs) for Chagoury and a Lebanese national named Joseph Arsan, Chagoury met with Elias Ayoub — identified in the documents as "Individual H" — at a "special interest conference" in Washington in September 2014. That event was clearly the IDC Summit, held Sept. 9 to 11 at the Omni Shoreham Hotel, which for years has served as a gathering spot for Washington's conservative elite and formerly hosted the annual Conservative Political Action Conference (CPAC) events.

The IDC event was hosted by a man named Toufic Baaklini, who acted as a middleman for the straw donations from Chagoury to political candidates. Ayoub and his wife were both attendees and speakers at that same event. According to the DPAs, Chagoury suggested that Ayoub host a political fundraiser for "Candidate C," who is now known to be Issa, and asked him to "contribute $30,000" to Issa's Victory Fund, which Chagoury made clear he would reimburse to Ayoub.

Photos reviewed by Salon (but no longer available on the internet) show that Chagoury and Issa sat next to each other at the gala dinner during the IDC summit.

On Sept. 28, 2014, Ayoub and his wife contributed $30,000 to Issa's Victory Fund, which made the Ayoub family's LLC the 10th largest employer to donate to that committee in the 2014 election cycle. According to the Justice Department, on Oct. 21, Joseph Arsan — at Chagoury's direction — wired $30,000 to Ayoub, indicating on the wire form that the funds were for a "wedding gift." That was actually the payment to reimburse the Ayoubs for their donation to Issa's campaign.

The Ayoubs made an additional $30,000 in federal contributions on the same day as the known straw donations: $2,600 each to Issa for Congress, $7,400 each to the NRCC and $5,000 each to Issa's PAC, which was called Invest in a Strong and Secure America. It remains unclear whether those funds really came from the Ayoubs or from someone else, but at any rate, those contributions are not included in the reviewed DOJ agreements.

Ayoub was also the co-host and a straw donor for a 2016 fundraiser for Fortenberry — the event that led to the Nebraska congressman's indictment last month. According to federal prosecutors, Ayoub began cooperating with authorities in September 2016 and told agents for the FBI and IRS about the illegal contributions to Fortenberry in 2016, as well as a $45,000 contribution to 2012 presidential candidate Mitt Romney and the $30,000 to Issa's victory fund in 2014.

Another Los Angeles resident, Ramez Toubassy (named as Individual I in DOJ documents), was "recruited" by Ayoub to make a $50,000 donation to the Romney campaign in the fall of 2012. Around the same time, Toubassy and Ayoub also each made $30,800 contributions to the Republican National Committee and to state Republican organizations in Idaho, Vermont, Massachusetts and Oklahoma. Toubassy gave $3,550 to each group and Ayoub gave $2,925. At the time, Toubassy was the "president of Brand Sense Partners, a Century City brand-consulting firm that counted Britney Spears and MGM among its clients." He has not been named or charged in the scheme to this point.

Notably, the Ayoubs had never previously donated to any of Issa's campaign committees and did not do so again until three and a half years after they apparently began cooperating with federal authorities. On March 28, 2020, shortly after Issa finished second in the top-two nonpartisan primary in California's 50th congressional district, Dr. Ayoub made two additional donations to Issa: $2,000 to his victory fund and $2,000 to Darrell Issa for Congress. (Issa went on to win the general election in November.)

The timing of those contributions, roughly a year before the DOJ announced "Non and Deferred Prosecution Agreements" with Chagoury and Arsan, is striking. It seems plausible that the Ayoubs were used as part of the DOJ investigation into Issa. The indictment of Fortenberry includes the following:

The Federal Investigation also sought to uncover whether and when any politicians were aware they had received illegal foreign national or conduit contributions and whether any person sought to impermissibly influence the recipient politician in exchange for the contributions.

"No, I don't have the same issues [as Fortenberry]," Issa told Politico's Haley Fuchs and Olivia Beavers in late October. "I made no statements to any FBI — or anything else."

Neither Rep. Issa nor the Department of Justice responded to Salon's requests for comment. Gilbert Chagoury along with Elias and Mireille Ayoub could not be reached.

More from Salon on corruption in Congress: