McCarthy may hope a marathon speech will win over Trump and the Trigger The Liberals Caucus. Guess what? It won't! 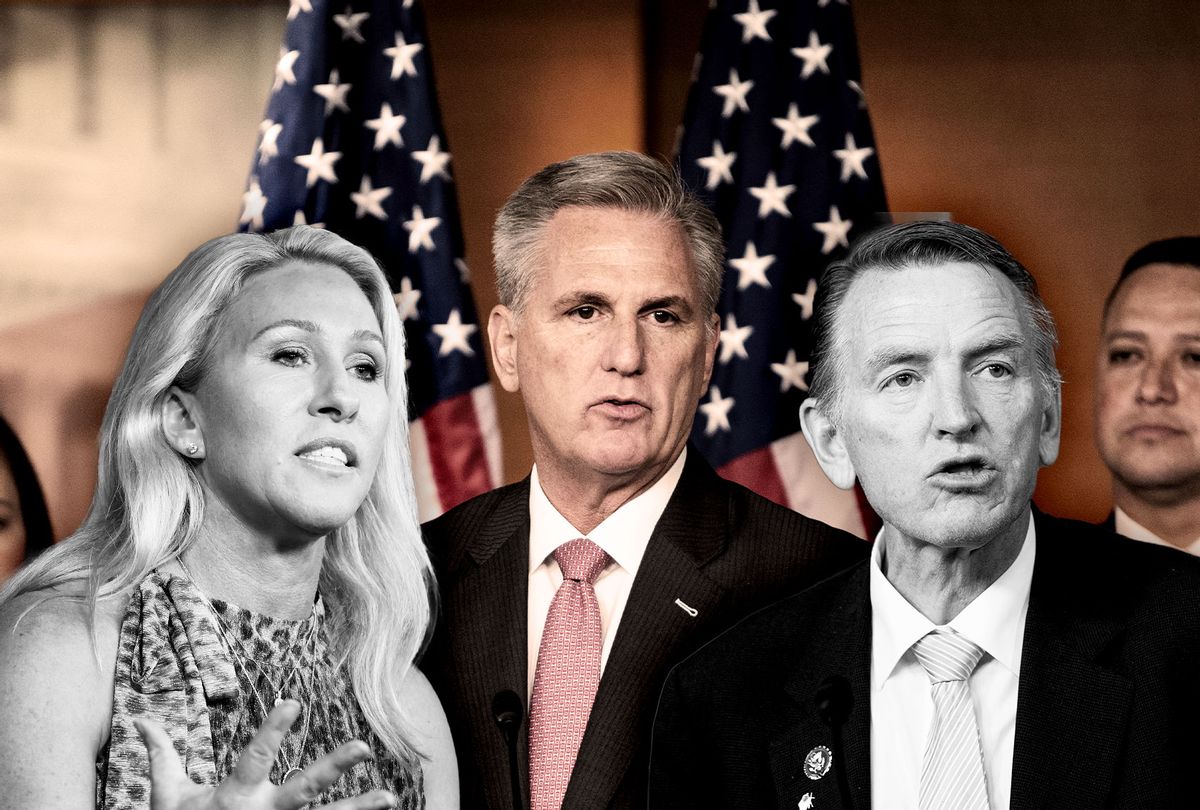 House Minority Leader Kevin McCarthy really thought he was going to own the liberals. Spoiler alert: The liberals were not owned.

The Democratic majority had scheduled a vote on President Joe Biden's Build Back Better bill for Thursday night, when suddenly, using an obscure rule that allows the minority leader to speak as long they wish during debate, the California Republican started droning — and he wouldn't stop. McCarthy kept droning, way into the night, and long past when Democrats decided to recess until morning. After all, he had to make absolutely sure that he beat the previous record for speech length on the House floor, set by now-Speaker of the House Nancy Pelosi, D-Calif., when she defended the rights of young immigrants in 2018.

It's a weird thing for McCarthy to take a stand on, in part because the Build Back Better bill is popular with voters and it isn't really the sort of thing that excites the GOP base. Sure enough, McCarthy's stunt immediately was eclipsed by something that actually gets the right-wing juices going: Kyle Rittenhouse's acquittal.

RELATED: Kyle Rittenhouse verdict: Just what the right needs to create a thousand more like him

To be sure, McCarthy's sincere opposition to the bill can be ruled out, as the bill is actually quite modest in its spending and taxation plans (at this point, it's about half a percent of overall GDP) despite the alarmist coverage that implies otherwise. It's especially weird in light of the fact that, even in its much-truncated form, Build Back Better is probably doomed at the hands of Sen. Joe Manchin, D-W. Va., who has already queued up his new bad faith excuse to kill it.

No, I fear that McCarthy did not just talk himself hoarse over Build Back Better because of anything having to do with Build Back Better. Instead, all signs suggest his stunt was a pathetic attempt to get into the good graces of Donald Trump and the Trigger The Liberals Caucus, lest he lose his shot at being the Speaker when, as expected, Republicans gerrymander themselves into a House majority next year. And if there's one thing that crowd cares about, it's annoying Democrats. Kevin McCarthy's marathon speech was him trying, and failing, to be a right-wing troll.

It's no secret that McCarthy has been on the outs with Trump and the more insurrection-friendly members of Congress, who are all far more popular with the GOP base than a limp rag like McCarthy will ever be. Former Trump chief of staff Mark Meadows lambasted McCarthy on Thursday for his lack of trolling chops.

"You talk about melting down, people would go crazy," Meadows said, if Trump, not McCarthy, became the next Speaker. Meadows was appearing on a podcast hosted by far-more-competent troll Rep. Matt Gaetz of Florida.

RELATED: Republicans threaten revenge against Democrats if (or when) they regain power in Washington

McCarthy's shot at being the Speaker next year was also threatened by uber-troll Rep. Marjorie Taylor Greene of Georgia on Tuesday.

NEW: Marjorie Taylor Greene just ripped into Kevin McCarthy for failing to punish the 13 House R's who backed the bipartisan infrastructure bill, saying the defections and lack of consequences are a sign of "weak" leadership.

"It's a complete failure," she told reporters.

The most recent grievance from Trump and his most loyal sycophants is that McCarthy allowed 13 members of the House GOP caucus to vote for a bipartisan infrastructure bill. This has infuriated Trump, not because he opposes infrastructure, but because of his ever-fragile ego. See, Trump wanted to pass an infrastructure bill when he was in office, but was way too lazy to get it done. So he's been freaking out on Republicans who let Biden succeed where he failed. And while most of his ire has been focused on Senate Minority Leader Mitch McConnell — releasing a lengthy diatribe calling McConnell a "Broken Old Crow" — the message is clear. Trump is mad about the infrastructure bill and expects GOP leaders to work themselves into a lather to gain his forgiveness. (Which he'll never actually give.)

So it's no coincidence that Trump called McCarthy in the hours before the GOP leader pulled his fruitless delay tactic. McCarthy has been bending over backward to please Trump and the loudest trolls in the House GOP caucus. It's why McCarthy went to the mat for Rep. Paul Gosar of Arizona, even though the white nationalist congressman has lately been trawling for attention with blatant fantasies of murdering Democratic colleagues. It's why McCarthy promised to restore committee assignments to Greene and Gosar, even though they were stripped for such unbecoming behavior. The desperation radiates off him, and Thursday's speech was just more of the same.

RELATED: Republicans don't care about death threats against colleagues — they are too busy seeking revenge

But the truth is that talking for eight hours won't work, if only because that kind of thing is a try-hard move. McCarthy doesn't get that their laziness is actually an appealing quality of right-wing trolls like Greene and Trump to the base. Besides, as a trigger-the-Democrats move, the speech backfired. It was just way too fun for Democrats to make fun of McCarthy. Rep. Alexandria Ocasio-Cortez of New York and Rep. Jamie Raskin of Maryland, for instance, spent much of the speech doing a Statler-and-Wardorf act on Instagram, drawing hundreds of thousands of views. Even Pelosi got in on the action, sending an email to reporters with the subject line "Is Kevin McCarthy OK?"

RELATED: Joe Biden still believes — but in the face of deepening cynicism, is that enough?

To be fair, getting mocked by Democrats is frequently rounded up by Republicans to be evidence of a successful liberal-triggering. That's why Sen. Ted Cruz of Texas doesn't care how many people dunk on him, and in fact seeks it out, because he knows his followers don't care how witty your rejoinder is. All they want is a reaction, which is treated as confirmation that liberal skin was gotten under. And it is true that right-wing media is trying mightily to spin McCarthy's wet dishtowel of a speech into an epic bout of trolling. Breitbart dutifully ran a headline declaring McCarthy "smashes" Pelosi's speech length record and Fox News tried to generate some excitement over Ocasio-Cortez "interrupting" McCarthy.

But long speeches over boring spending bills is just not the sort of trolling that gets the lather up in the right-wing base. Even before they started to celebrate the Rittenhouse verdict, right wing social media reacted to McCarthy's stunt with a big yawn. More to the point, there's very little chance this will move the needle with Trump, who is still quite salty over McCarthy's initial opposition to Trump inciting an insurrectionist riot on January 6. No matter how much work McCarthy has done to shield Trump and his co-conspirators from consequences, Trump will likely forever hold a grudge against McCarthy for this failure to instantly praise the insurrection as the greatest moment in human history. Plus, it's probably just fun for Trump and the meanest trolls in the GOP to constantly bully McCarthy, since he rolls over and offers his belly to them every time.

McCarthy may very well end up as Speaker in 2023. But it won't be because of his trolling skills, which are hilariously bad. It will be because it's a crap job that takes work and people complain at you constantly. That's not really what GOP standard-bearers like Marjorie Taylor Greene or Paul Gosar are into. It makes McCarthy's tap-dancing for Trump all the more pathetic because it's really not necessary at all.