Missouri Gov. Mike Parson's office asked for an analysis of mask mandates, but didn't much like its results 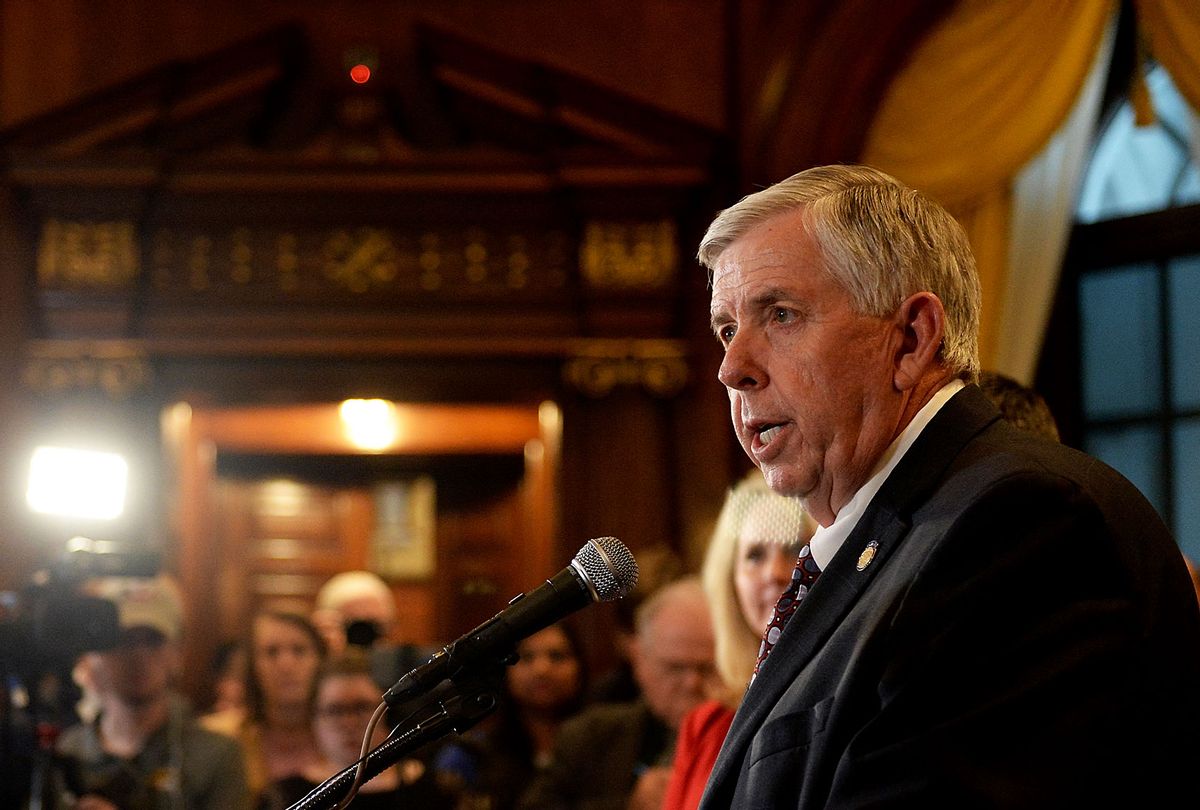 Missouri Gov. Mike Parson's administration withheld an analysis showing that COVID mask mandates saved lives as Parson railed against mask requirements, according to an investigation by the Missouri Independent.

A study conducted at the request of Parson's office in early November found that mask requirements helped reduce COVID infections during a spike following the spread of the delta variant, according to the report. The study compared infection and death rates in St. Louis and St. Louis County and Kansas City and Jackson County with the rest of the state. The state's health director, Donald Kauerauf, wrote to Parson's office that the analysis showed that mask mandates were effective, according to emails obtained by the Independent and the Documenting Covid-19 project.

"I think we can say with great confidence reviewing the public health literature and then looking at the results in your study that communities where masks were required had a lower positivity rate per 100,000 and experienced lower death rates," Kauerauf wrote.

But the analysis was never made public and was not even shared during cabinet meetings with top state officials, according to the emails.

Missouri is one of just six states that never implemented a statewide mask mandate at any point in the pandemic. Parson has repeatedly criticized mask mandates, calling them "WRONG" in a tweet earlier this year and arguing that vaccinated people should not be subject to mask requirements, even though data shows that vaccinated people can still be infected and the Centers for Disease Control and Prevention recommends that vaccinated people wear a mask in public in areas of substantial or high transmission. Missouri is currently experiencing another increase in infections after a delta variant wave over the summer. The state reported a positivity rate higher than 12% on Thursday, more than twice the national average.

The local governments "imposed an unlawful, arbitrary, and capricious mask mandate that is not supported by the data or the science," Schmitt's lawsuit argues. He filed a similar lawsuit against Columbia Public Schools.

The state's own data shows that between April and October, jurisdictions that imposed mask mandates reported 15.8 cases per day per 100 residents compared to 21.7 per day in communities without mask requirements.

"More than anything it confirms for us what our public health experts have been saying, that masks are an effective tool for reducing community transmission," Nick Dunne, a spokesman for St. Louis Mayor Tishaura Jones, told the Independent.

Despite Schmitt's lawsuit and Parson's criticism, the administration has allowed local governments to set their own health rules. St. Louis County and St. Louis still have mask mandates in place, though they've been lifted in Kansas City and Jackson County.

Kauerauf has also backed mask requirements since starting the job in September.

"I rely (on) the experts at the CDC on that. Everything I've read, everything I've seen: Masks work," he said at his first press conference.

Schmitt's office said that the analysis will not affect its lawsuits challenging mask rules.

"We dispute this premise and these charts," spokesman Chris Nuelle told the Independent. "We've been clear that Missourians should have the right to make their own decisions, and that government bureaucrats shouldn't be mandating masks or vaccines. We will continue to fiercely litigate our lawsuits against mask mandates in Missouri."

Medical experts called out the state for putting residents at risk by fighting mask mandates and withholding data showing that they work.

"It's devastating to see what the Missouri governor did since mask policies do reduce the spread of COVID-19 and would reduce the number of people who become sick and die in Missouri," Julia Raifman, a health law and policy professor at Boston University who oversees the COVID-19 U.S. State Policies Database, told the Independent. "It's devastating to see policymakers not implement policies that would reduce the number of children who are growing up without their parents."

Read more on the political battles over pandemic policy: