Dr. Oz's MAGA campaign: He wants to get "tough on China" — but his products are made there 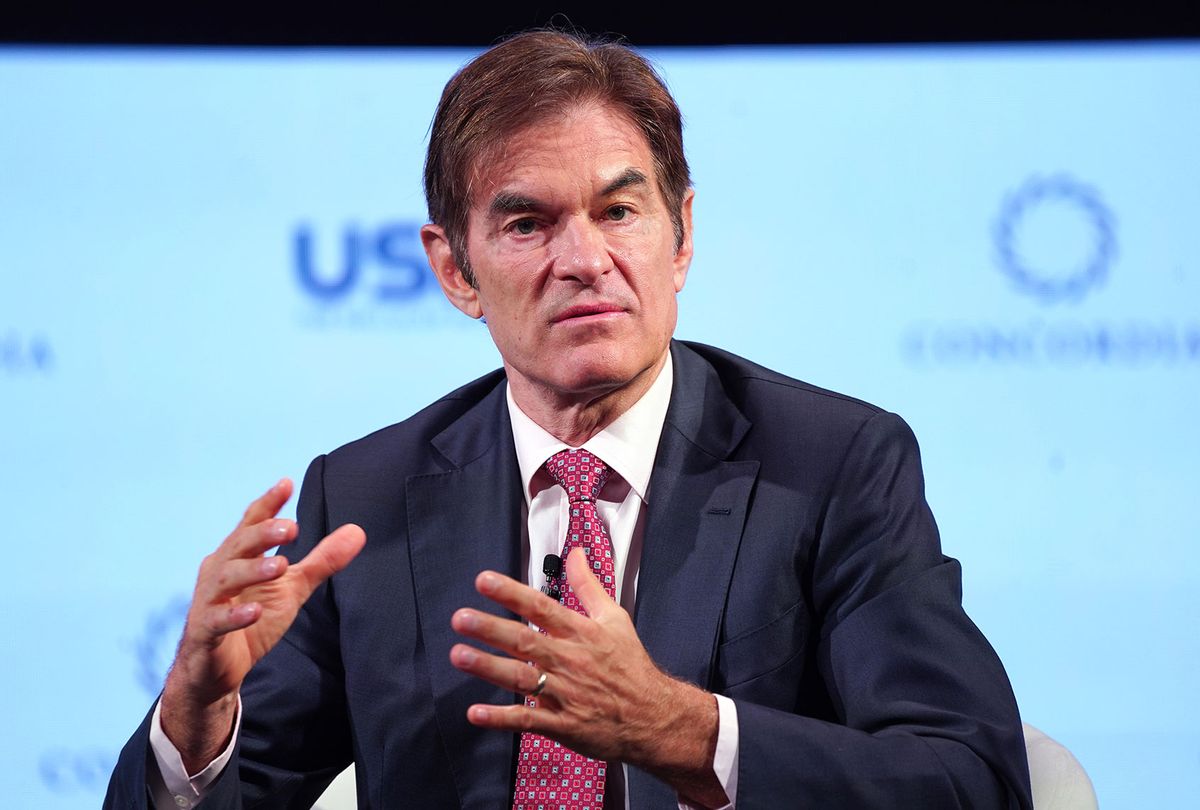 Dr. Mehmet Oz launched his Senate campaign this week with calls to focus on creating jobs in the United States — but his own company sells products made overseas, largely in China.

Oz this week joined other celebrities like Caitlyn Jenner and former NFL star Herschel Walker hoping to follow in Donald Trump's footsteps from TV to the halls of power. Oz announced that he will run in the Republican primary for the U.S. Senate seat in Pennsylvania currently held by Sen. Pat Toomey, R-Pa., who is retiring. It's unclear whether Oz actually lives in Pennsylvania, although he still has time to address that. Oz, who served on Trump's Council on Sports, Fitness, and Nutrition and touted Trump's response to the COVID pandemic in his campaign announcement, is focusing his campaign on public health — although he has been widely criticized for repeatedly pushing unproven medical claims and quack remedies — and on echoing Trump's "America First" rhetoric about the economy.

Trump made creating manufacturing jobs and boosting goods "made in America" a centerpiece of his platform, but in practice accomplished very little on that issue. His own company manufactures most of its products overseas, often in China.

One of the top issues listed on Oz's campaign website is getting "tough on China."

"Dr. Oz believes the United States has failed to respond to the global Chinese threat," the text reads. "Every year we see more and more companies ship American jobs overseas, while failing to stand up to China as they steal our intellectual property and manipulate their currency. Dr. Oz believes we need to focus on creating jobs here in America."

But one of the companies relying on China is Oz's Good Life brand. Oz last year partnered with the consumer goods company Maven to "release a new science-based sleep brand with cutting-edge products aimed to help people sleep better."

The company sells a variety of bedding products, many of them listed as "imported" on the Macy's website which appears to be Maven's primary retail seller. The Macy's listings do not specify a country of origin, but the Walmart site clarifies that the Dr. Oz Good Life "Safe in Bed Waterproof Mattress pad" is made in China. The company's mattresses are made in Spain, according to a listing from Hudson's Bay.

Oz's campaign did not respond to a request for comment.

"Dr. Oz is a well-established fraud, so it makes perfect sense that he claims to care about creating American jobs but actually has his own licensed products produced overseas," said Brad Bainum, a spokesperson for the Democratic super PAC American Bridge 21st Century.

Oz, whose net worth is estimated at around $100 million, has long faced criticism from medical professionals for promoting "quack treatments and cures in the interest of personal financial gain." He has repeatedly touted miracle cure products with little scientific evidence of their effectiveness. A 2014 study found that half of the medical advice he dispenses on his show is either baseless or wrong. Last year, Oz promoted the Trump-backed malarial drug hydroxychloroquine as a treatment for COVID, even though multiple studies have found it is ineffective and potentially dangerous.

The last time Oz went to the Senate, lawmakers chewed him out for promoting a green coffee bean extract as a miracle weight loss supplement, after its makers were fined $3.5 million for making misleading claims.

"I've tried to do a lot of research in preparation for this trial and the scientific community is almost monolithic against you," Sen. Claire McCaskill, D-Mo., who then chaired the Senate Subcommittee on Consumer Protection, Product Safety and Insurance, told Oz during a 2014 hearing, reciting all of the "miracle" cures he has touted on his show.

"When you feature a product on your show it creates what has become known as the 'Dr. Oz Effect' — dramatically boosting sales and driving scam artists to pop up overnight using false and deceptive ads to sell questionable products," McCaskill said.

Oz disputed that he had misled viewers, although he acknowledged that some of his claims have turned out to be untrue.

"I actually do personally believe in the items I talk about on the show," he said. "I passionately study them. I recognize they don't have the scientific muster to present as fact but nevertheless, I would give my audience the advice I give my family all the time and I have given my family these products."

After announcing his Senate campaign, Oz came under new scrutiny over whether he actually lives in Pennsylvania. He attended both medical school and business school in Philadelphia decades ago, but for much of his adult life has lived in a posh home in Cliffside Park, New Jersey, where he films his TV show. His campaign told the Philadelphia Inquirer that Oz has been renting his in-laws' home in Montgomery County, Pennsylvania, since December 2020, which is when records show he registered to vote in the state. Politico has reported that Oz has recently been shopping for a home in the Philadelphia suburbs.

Rep. Bill Pascrell Jr., a New Jersey Democrat, took a swipe at Oz on social media over his alleged recent move. "I want to congratulate my North Jersey constituent Dr. Oz on his run for US Senate in Pennsylvania," Pascrell wrote on Twitter. "I'm sure this fully genuine candidacy will capture the hearts of Pennsylvanians."

Oz jumped into the race after the abrupt departure of presumed Republican frontrunner Sean Parnell, who had been endorsed by Trump but suspended his campaign after a judge awarded sole custody of the couple's three children to his estranged wife. His wife alleged that Parnell had assaulted her and one of their children, which he denies.

With Parnell out of the picture, the Republican field competing to fill Toomey's seat also includes real estate developer Jeff Bartos, who spent much of the race trying to out-Trump Parnell, and Carla Sands, who served as Trump's ambassador to Denmark and also backed his election lies. Oz's announcement does not appear to have scared off other potential candidates. Hedge fund millionaire David McCormick, another former Pennsylvania resident and the husband of former Trump adviser Dina Powell, is reportedly planning to jump into the race, as is former Republican congressman Keith Rothfus.

With a crowded field that now includes a controversial TV doctor who hasn't lived in the state for many years, top Republicans in the Keystone State are trying to steer clear of the messy campaign. The "pretty much universal response has been 'LOL,'" a Pennsylvania Republican strategist told Politico.

"I don't know a single politically involved person in Pennsylvania who's not being paid who wants to be involved" in the Oz campaign," the strategist said, adding that there's "no one who thinks the solution to the Sean Parnell issue is Dr. Oz."

Read more on Dr. Oz and the celebrity-candidate boom: