Paradoxically, the process of farming (and tossing) Christmas trees can actually remove carbon from the atmosphere 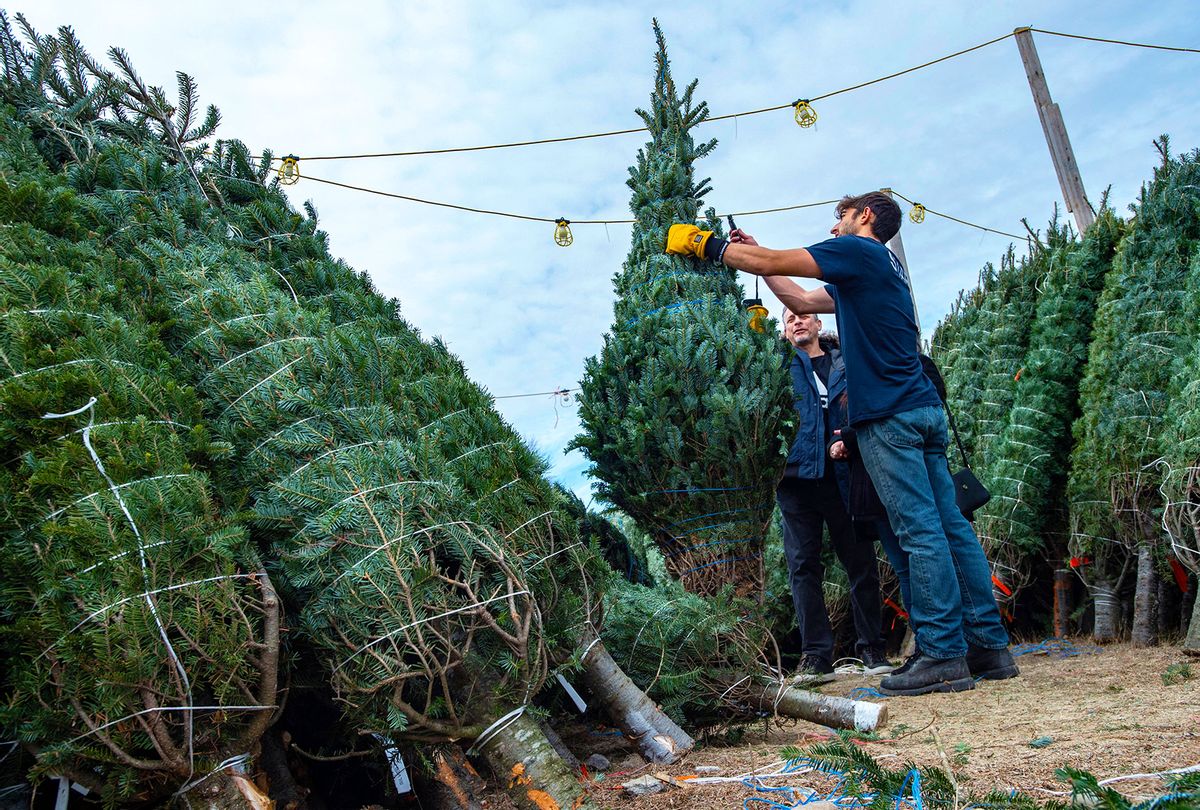 To those who live in cities, the idea of a "Christmas tree farm" might seem quaint. "Farms," in the popular imagination, are for crops that you eat — corn, pumpkins, wheat, soy and so on. Yet Christmas trees are an essential part of our lifestyle, spiritually if not nutritionally. Millions of secular Americans join their religious neighbors every year to continue a tradition of importing a wild plant — or a facsimile thereof — into our homes for yuletide cheer. Unless they opt for an artificial tree, this means that at some point a seed will have to be planted, cultivated and ultimately harvested (whether by an employee or the customer).

Therefore, strange though the concept may seem, Christmas trees are indeed a crop that can be farmed. And unfortunately, just like many other agricultural industries today, there are reports of Christmas tree farmers being struck by hard times. One "cut your own" Christmas tree field in upstate New York has closed this season because the owner needs to give new trees time to grow and catch up, as rising demand has put a stress on the farm. (Trees take seven or eight years to grow and, as owner Andy Kelkenberg told a local CBS affiliate, "the business is growing faster than you can grow the tree.") The small Pennsylvania city of Indiana, known as the "Christmas Tree Capital of the World," is expected to come up short, with one industry leader predicting that prices could go up by as much as 30% due to demand outpacing supply. More broadly, media outlets are reporting that there will be a nationwide Christmas tree shortage due to factors ranging from supply chain issues to this summer being unusually hot and dry (likely a climate change-related variable.)

This is because, like any other agricultural sector, the Christmas tree industry has its own unique needs and quirks that — under the wrong conditions — make it vulnerable to disruption.

When a Christmas tree farmer decides to open their business, it is not just an investment; it is a lifestyle. Because the trees take so many years before they can be harvested, farmers will often start by purchasing 3-to-5 year old trees from specialty nurseries and then planting an acre or so of additional trees in each succeeding year. Trees are planted in grids that are 5 feet by 5 feet large, and usually you can fit 1,700 trees in an acre. This process begins around March, and by the summer Christmas tree farms begin to vigorously protect their burgeoning assets from insects and weeds. They will also fastidiously shear branches and needles off the sides of trees with knives and other gardening tools, to make sure they grow in an aesthetically pleasing conical shape. Harvesting begins in October and continues through December. The United States has roughly 15,000 farms overall, with the majority of those farms growing trees on 10 acres or less.

Of course, like all agricultural sectors, Christmas tree farms come with an environmental impact. There are the carbon emissions released into the atmosphere when trees are transported by truck or helicopter to stores or lots for purchasing. Farmers will also protect their crops from pests with pesticides that include glyphosate, which appears in products like Roundup and is believed by many scientists to be carcinogenic. While Christmas tree farmers are supposed to minimize their use of pesticides (both for sustainability reasons and because no one wants a Christmas tree covered in chemicals), any use of eco-unfriendly pesticides is likely to have some impact.

They also have a large carbon footprint — although so do the alternative, artificial trees. And therein lies the perennial dilemma of whether an environmentally conscious consumer should go with a natural or artificial tree.

One of the big problems with fake trees is that they are usually made of plastic, and plastic pollution is so severe — linked to mass infertility, contaminating our oceans and getting people sick — that it makes little sense to argue for producing more unnecessary plastic goods on the grounds of sustainability. Then again, if someone purchases a plastic tree and does not dispose of it, you could argue they are being eco-conscious because at least they are renewing the resource. (Unsurprisingly, creators of fake trees have very different figures about their environmental impact than growers of real ones.)

What's more, natural Christmas trees give back to the environment, something that plastic ones only do (arguably) if their owners decide to use them for many years. Planting fields of Christmas trees help fight climate change because, for every tree that is cut down in a year, there are many more that remain untouched. These trees will capture the greenhouse gas carbon dioxide in their needles, branches and roots. After happy families have finished using them, they can be turned into mulch that can be used by other flora and fauna. While it may seem counterintuitive to argue that cutting down a tree helps save the planet, this particular tradition has ripple effects that are ultimately pro-tree — and therefore pro-Earth — despite its downsides.

While most of the discarded and unsold trees get turned into mulch, this is not always their fate. In Southern California, officers from the state's Department of Fish and Wildlife will submerge some discarded trees in the bottom of lakes so fish can have a place to hide. Though these trees decompose over time, for a while, they still maintain their carbon mass — effectively keeping the carbon in their wood out of the atmosphere for longer than, say, burning wood might.

In other instances, Christmas trees wind up in landfills, or get shredded so they can be recycled to cover trash. Unsold trees might be fed to animals, or sent to coastal areas where they can be tied together and used to trap sand as a protection against coastal erosion. In Illinois, scientists figured out how to use old Christmas trees to construct nesting structures for endangered herons.

The world has come a long way since President Theodore Roosevelt banned Christmas trees from the White House to send a message against over-logging. In his era, the environmental movement focused on conservation, and Christmas trees were more likely to come from the wild. In an era of centralized and industrialized agriculture and climate change, the choices made by an early environmentalist like Roosevelt are very different from the ones that a similarly-minded person might make today. Either way, it is clear that Christmas trees are one tradition that does not need to be abandoned for environmental reasons — although, given the current shortages, it seems like the environment may soon wind up forcing Christmas-lovers to question whether polluting and Yuletide cheer are compatible.