Nothing opens up GOP wallets like the promise of fascism 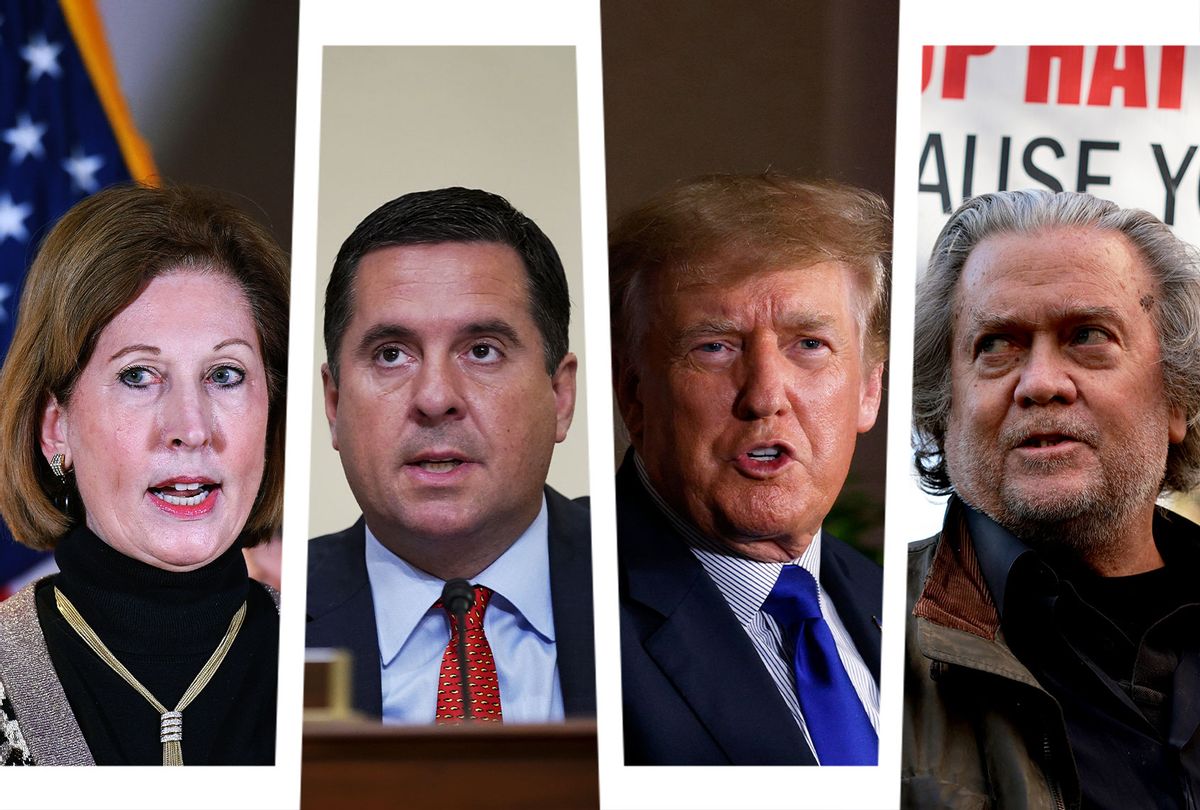 In any time before, leaving Congress to work for Donald Trump would be a huge financial step down in the world, like trading a job as a corporate lawyer for selling handmade Christmas ornaments in the park. Trump is, after all, one of the most spectacularly incompetent businessmen of all time. He is a man who was gifted a real estate empire and a billion dollars by his father and producer Mark Burnett, yet somehow managed not only to burn through all that money but also to go another one billion dollars into debt. Leaving your cush job as a congressman on the verge of chairing a prominent House committee to work for the guy who somehow lost $2 billion seems like a bad bet. But it's a bet that Rep. Devin Nunes, R-Calif., is taking.

On Monday, the Trump loyalist announced that he's leaving the House to take a job as the CEO of the newly-formed Trump Media & Technology Group, even though, as Jon Skolnik reports for Salon, "Trump's new social media platform is reportedly under investigation by federal regulators." While it's tempting to snicker at Nunes and hope this business venture fails as badly as every other Trump business, the depressing truth is that Nunes is probably right that this is a cash cow. Due to the huge right-wing base that can be endlessly milked for profit, being a fascist stooge these days is like printing money.

For proof, look no further than this new report from the Washington Post, exposing how lucrative it was for Trump lawyer Sidney Powell to spread lies about President Joe Biden "stealing" the 2020 election. In the months after the November election, Powell raised an eye-popping $14 million "from donors inspired by her fight to reverse the outcome of the vote," the Post reports. Unsurprisingly, "questions about where the money was going" have led to "acrimony between Powell and her top lieutenants," as they scuffle over these ill-gotten gains.

Or take the example of former White House advisor Steve Bannon, who seems to be doing just fine, grifting-wise, even though he literally got arrested in 2020 on charges of defrauding donors for his phony "border wall" project. Bannon was pardoned in the hours before Trump was finally forced to leave the White House, but got right back to shaking down gullible MAGAheads for money. As a report by ProPublica published last month shows, Bannon has set up an elaborate scheme to make money off Google Ads, despite the company's policies against funding violently fascist propaganda. Bannon's front page on his website tricks the ad algorithim with "innocuous stock content, such as tips on how to protect your phone in winter weather." Right below, however, is a video player that "routinely portrays participants in the Jan. 6 Capitol riot as patriots and airs false claims about the 2020 election and the COVID-19 pandemic." All funded, inadvertently, by "prominent brands as Land Rover, Volvo, DoorDash, Staples and even Harvard University."

Right-wing politics have always been deeply intertwined with sleazy and even illegal grifting schemes meant to separate elderly racists from their kids' inheritance. Nearly every right-wing figurehead has an email newsletter that directs readers to dish out money for fake cancer cures, gold bug scams, and useless "survivalist" goods. But after the failed January 6 insurrection, there's expanded opportunity for pumping the right-wing base for money, with promises that democracy will be overturned and power restored to a shrinking conservative minority.

To be certain, Trumpists like Powell and Bannon are entirely sincere about their hopes that they can gut electoral systems and install Trump as an illegitimate authoritarian president. But they also recognize how the millions of Americans who share those hopes are only too happy to turn over their retirement accounts for the fascist cause.

Of course, there is no bigger fraudster than Trump himself.

Trump's supposed media company, the one Nunes is joining, is looking very much like an elaborate scam. Trump has raised hundreds of millions of dollars of investor funds, even though, as Matt Levine of Bloomberg writes, there "absolutely no financial or technical or business information" available publicly about the company and almost no sign that the company is "actually building a social network or a streaming platform or anything else." The supposed valuation of the project is $1.6 billion, but that is literally based on nothing but the fact that Trump is attached to it. You know, the guy who took a billion cash and managed to turn it into a billion dollars of debt before running for president.

As Judd Legum of Popular Info reports, the people involved in this scheme seem less interested in building a company than "than fleecing retail traders for a quick buck," by artificially driving up the price of stocks and flipping "these stocks immediately." No wonder the whole shady deal is being investigated by the Securities and Exchange Commission.

RELATED: Forget "The Apprentice" — Trump's taxes show he was really "The Biggest Loser"

Still, Nunes is running towards this scheme and not away, and it's no wonder.

Even if, as it seems likely, the whole thing is a scam, there's no reason to think that it will backfire on the scammers. Trump and most of his buddies haven't paid a single legal penalty for trying to overthrow the U.S. government. Of course, they feel confident that they'll get away with shaking down a bunch of gullible investors who mistakenly think Trump, who couldn't manage his own checking account if he had to do so himself, is somehow going to create a major media company. Yes, some of the low-level fraudsters in Trumpworld do face legal penalties, but Trump's ability to skirt justice seems bulletproof, especially when Attorney General Merrick Garland seems afraid to actually deal with the former president.

On one hand, it's hard not to laugh. Who cares if Trump and his buddies separate MAGA fools from their money? On the other hand, the problem is these frauds aren't merely frauds. They really are financing what is so far an extremely successful effort to lay the groundwork for stealing the 2024 election.

The fascist movement is very real, even if there's a lot of fraud wound into it by leaders hoping to get their beaks wet while they end democracy. Our legal system's inability to deal with the fraud aspect is just a symptom of a larger problem, which is a failure to deal with these arsonists of democracy at all. If that doesn't change, this country will have a lot more to worry about than idiot retirees emptying out their bank accounts for the latest "stop the steal" scam.