We’re all focusing on the wrong things on "Succession"

Why is no one talking about this other photo on Roman's phone? 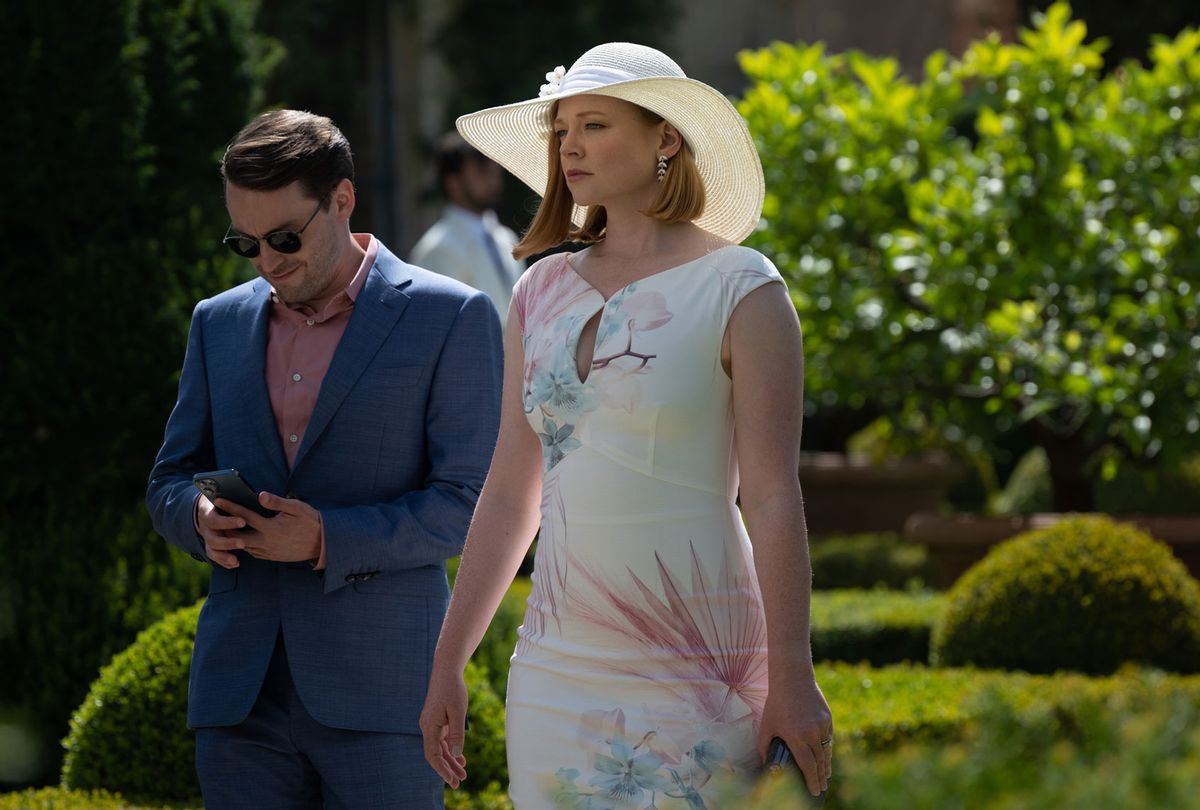 With all due respect to my fellow journalists, I believe everyone has been focusing on the wrong developments since the penultimate episode of the third season of "Succession" aired. Instead of discussing Kendall's (Jeremy Strong) future or Roman's (Kieran Culkin) face melting off and his soul leaving his body after sending a d**k pic to his father (Brian Cox), we should be discussing something much more important: the show's continued dedication to impressive visual gags.

Specifically, why has no one addressed the fact that Roman has a photo of a fluffy white cat on his camera roll or that his lock screen is him giving the finger to Shiv (Sarah Snook)?

It might seem trivial, especially given the ambiguous way the episode in question ended, but "Succession" is one of the few shows on TV that doesn't screw around when it comes to technology or the visual gags it makes possible. While other shows put minimal effort into what viewers might see on a TV screen or a phone in any given scene — the most recent episode of "Hawkeye" wants us to believe Clint Barton (Jeremy Renner) starts a new text conversation with his wife (Linda Cardellini) every time he messages her (this is a common problem across TV and film) — the creative minds behind "Succession" are out here creating literal works of art that might only appear for a few seconds but greatly help to not only enrich the world of the show and deepen its characters but also entertain us as viewers.

RELATED: "Succession" and the end of the myth of American meritocracy

In "Chiantishire," right before Roman sends the aforementioned illicit photo to his father by mistake and sets off a chain of events from which he might never recover, he receives an encouraging text from Gerri (J. Smith-Cameron). She congratulates him on a job well done after he smooths things over with Lukas Matsson (Alexander Skarsgård) and convinces Logan to entertain discussions of a possible merger between Waystar and GoJo. Roman's lock screen is clearly visible behind Gerri's text (I'll forgive him for enabling text preview while his phone is locked since it's necessary to the story here), and it's clear the photo is of him flipping his sister the bird. It says a lot about Roman that his choice of photo features his family and centers his place within it. But it also reveals his general feelings towards Shiv. While this isn't exactly breaking news, it reinforces the complicated relationship that exists between the two siblings.

Once Roman decides to reply to Gerri's text, we see him open his camera roll in search of the now-infamous d**k pic. Given that he's trying to be discreet, we can't see a whole lot of Roman's camera roll (though we see plenty of Roman). But what we can make out is a nighttime photo of a large estate, the picture of the cat, and what appears to be the aforementioned photo of Shiv. Roman is hardly someone who would own a cat as a pet, and he doesn't seem like the type to save random animal photos on his phone to send to other people (that's totally something people do, right?), so its placement here is just as noteworthy.

What does it mean? Is it meant to reveal that Roman might have a secret soft side (no way) or that the Roys actually are just like the rest of us (unlikely)? Does it only exist to make us laugh? Maybe.

This is hardly the first time the show has put this much effort into what's stored on or displayed on someone's phone, though. Earlier this season, in "Mass in Time of War," we saw that Shiv has her father saved in her phone with a photo of Saddam Hussein, which obviously says a lot about how she views Logan but says a lot about Shiv too, since she still chose him and the company over Kendall. And, of course, there was the time Matsson took a piss on Roman's phone in "Too Much Birthday" as a symbolic gesture of how he felt about Waystar's streaming app.

In 2021, our phones are our lifelines to the world. What we have saved on them says a lot about who we are, what is important to us and how we view ourselves as well as the people in our lives. What we do with them says even more — to Roman, it makes no difference whether Matsson pisses on his phone because he has plenty of money to replace it. The creative minds behind "Succession" know all of this, obviously, and they execute everything to reflect it. It's impressive when you really think about it. After all, someone had to take that photo of Snook getting flipped off even though it would be on TV for a few seconds at most. That takes effort and preparation.

Of course, these are also just the latest examples of how "Succession" uses technology to bolster its ongoing narrative. Viewers have long cheered the show's fake news chyrons that have appeared in the show. In Season 2, one read, "Gender Fluid Illegals May Be Entering the Country 'Twice'." Another asked, "Why Are So Many of Our Older Celebrities Dying?" In another episode, a chyron proposed the most important question of all — "Wait, Is Every Taylor Swift Lyric Secretly Marxist?" — while another was a pitch-perfect parody of current "news" practices: "Meet the World's Richest People Trafficker (He's a Surprisingly Nice Guy)."

These are incredible sight gags, small rewards for eagle-eyed viewers. But they also fit within the context of the show given how important the use of media and the presence of the media are to its story. However, they also feel like real news items that one could conceivably find in the wild. This now extends to the use of cell phones as well.

So apparently we're supposed to believe that Roman Roy is someone who has photos of cats on his phone. What does it mean? It's still not entirely clear. But perhaps we're actually asking the wrong questions. Maybe we should be asking: Is the cat imaginary? Is it dead? And does Colin need to take it out in a paper bag?

The "Succession" finale, in which all or none of these questions will be answered, airs Sunday at 9 p.m. on HBO.