On "Succession," Kendall Roy is the perfect #Girlboss caricature 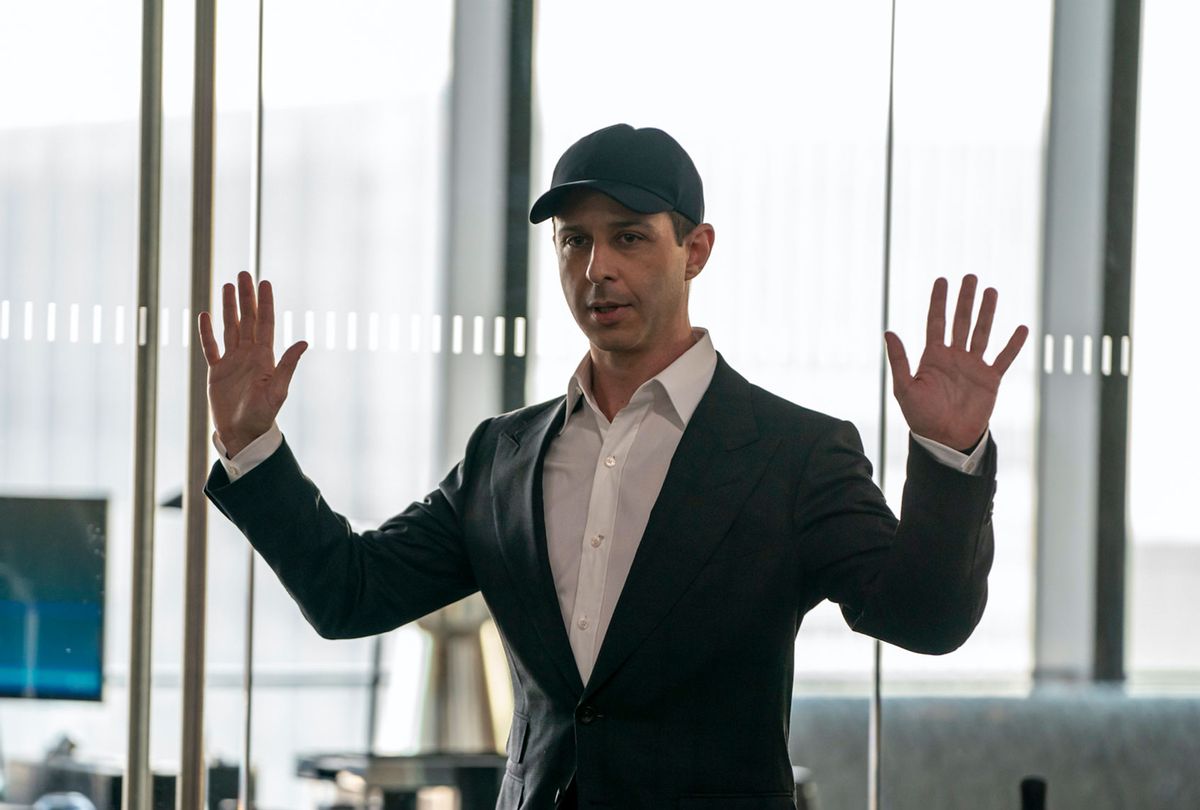 Jeremy Strong as Kendall Roy in "Succession" (Macall B. Polay/HBO)
--

When Kendall Roy (Jeremy Strong) triumphantly yells this rallying cry to press in this week's episode of "Succession," we can't help but cringe — almost as hard as we did during Kendall's delivery of a particular celebratory birthday rap, seemingly a lifetime ago.

This week, Kendall continues his quest to oust his father Logan (Brian Cox) from the family empire, Waystar Roy Co., by exposing his father's complicity in widespread sexual abuse, exploitation and even death among workers on their cruise line. Of course, Kenny only committed this betrayal in protest of being the fall-guy for the cruise scandal, wheras previously, he would have thrown any of the survivors of abuse under the bus, which he more or less did with his Season 2 Senate testimony writing off the accusations against his family as a politically motivated attack.

RELATED: "Succession": how true to life is the TV series?

Since turning on the objectively evil family business, Kendall has been high on his own supply — or rather, his own utter lack of self-awareness — even more so than usual.  He feels that he's "good" now, and he's adopted the social justice-y language to prove it, cementing himself as the ultimate #GirlBoss. His levels of delusion about his own goodness and the ways it's perceived reach new heights in Sunday's episode, as Kendall staunchly identifies with the very progressives who mock and scorn him.

Co-opting social justice language can only take you so far

Just last week, we got evidence of just how committed Kendall is to his new-age, "woke" branding.

In trying to get his siblings to help him overthrow their father, he speaks of the powerful old white people who run the world as if he and his siblings aren't just like them. "The great whites, from politics to culture, they're rolling off stage — it's our time," Kendall says.

"You mean us? This multi-ethnic, transgender alliance of 20-something DREAMers we got right here?"  Roman (Kieran Culkin) responds.

Kendall ignores Roman's quip, either because he knows it's true or because he simply doesn't get it. What follows sounds like a page out of a Pete Buttigieg Iowa stump speech from 2020.

"Big picture? We're at the end of a long American century," Kendall says. "Our company is a declining empire inside a declining Roman empire. . . . U.S. supremacy is waning. Within that context, we can become omni-national and reposition. Information is going to be more precious than water in the next hundred – Amazon is 20 years old, Gates is an old geezer, detoxify our brand and we can go supersonic."

Whether or not there's merit to Kendall's vision for the rebranding Waystar could undergo if they remove Logan and take charge, it's clear he doesn't actually embody the values he's sputtering. When Shiv (Sarah Snook) rejects his offer to team up, he snarls back, "It's only your teats that give you any value!" (But sure, F the patriarchy!)

Whatever language he uses, he is who he is, and he is where he is because of self-interest more so than sympathy for the female victims of his family. Of course his progressive critics can see right through this, no matter how much he pitifully identifies as one of them.

We see this again in Sunday's episode when his entourage plays a bizarre, narcissistic game of "Good Tweet-Bad Tweet" in the back of a limo, during which Naomi Pierce (Annabelle Dexter-Jones), Cousin Greg (Nicholas Braun), and Comfry (Dasha Nekrasova) alternate between reading positive and critical tweets about Kendall.

A tweet that Naomi reads — "Allies don't always come in the form we like, but what Kendall Roy did was important and brave" — is the perfect ego-stroker that exemplifies exactly how Kendall sees himself, and wants to be seen. Others? Not so much. Another "good" tweet comes from a user who admits to "want[ing] to f**k Kendall Roy," but the others, read by Greg and then Comfry, hit Kendall where it hurts — or where it would hurt, if he had enough self-awareness.

"Kendall Roy is not a hero, fam," Greg reads, "He is bootleg Ross with a daddy complex."

"He clearly has mental health issues and crazy guilt, coupled with addiction. That's all this is, and it's sad," Comfry reads.

Kendall seems to shrug these meaner tweets off, leading the limo riders in chanting "That one sucked! That one sucked!" We later learn that one of the main reasons he seems so unphased by nasty (and deserved) criticism and mockery is that Kendall is very much a student of the "all press is good press" school of thought. If people are talking about him, no matter what they're saying, it's because they love him!

Take his latest obsession, a John Oliver-esque comedian masterfully played by Ziwe whose show "The Disruption with Sophie Iwobi" consistently targets him, dubbing him an "Oedipussy." During one segement of her show, Sophie diagnoses Kendall with Caucasian Rich Brain.

"What happens is genetically inherited wealth and whiteness cause neural pathway in the brain to constrict and make the patient believe he's woke when he's just a total f**king jackass," she explains.

Kendall is ecstatic, seeing this as a delightful roast. "This is being in the conversation. This is f**king great," he tells his team. Later, he even insists on going on the show as a guest.

In a world of Jeff Bezoses, Elon Musks, and Mark Zuckerbergs, who can hire top-tier comms and marketing teams to sell them as benefactors rather than soulless wealth-hoarders, co-opting social justice language as Kendall does just doesn't hit like it used to. People who are actually committed to progressive values and actions can see through shallow progressive language like Kendall's, and see who he really is — something Kendall is still trying to figure out himself.

The irony is that it's the very women Kendall claims to be helping who are calling him out. At one point during the awkward journalism gala, he refuses to meet Shiv halfway when she asks to work to change Waystar from the inside, and she asks him point-blank, "Do you not actually give a f**k and it's all ego?"

(For what it's worth, Shiv isn't exactly the "good guy" she thinks she is, either, but at the very least, she isn't shouting "F the patriarchy" to the press.)

Later, the siblings' inability to agree on a way forward escalates when Kendall sabotages Shiv's official public Waystar debut. For her first speech as president at the company, Shiv promises Waystar is committed to listening to criticism and accountability – when she's promptly interrupted by "someone" amplifying Nirvana's song "Rape Me," driving Shiv from the stage.

Of course, Kendall's visit to Waystar not-so-coincidentally coincides with this stunning display of callousness and cruelty, and one that makes light of rather than helps any of the victims of Waystar, and exemplifies more than anything that Kendall — if responsible — cares more about petty revenge on the family that tried to screw him, than standing with women. Even if his stunt is meant to highlight the company's hypocrisy, it's done in such a public and empty way that it accomplishes nothing except for causing embarrassment.

RELATED: "Succession" ends its second season with a killer instinct

Shiv, not willing to take the humiliation Kendall subjected her to lying down, publishes a statement that ​​references Kendall's "many attempts at rehabilitation from his multiple addictions," his long history of misogyny, and his "grandiose and disordered thinking," moments before he goes on stage to join "The Disruption with Sophie Iwobi" as a guest.

The piercing statement finally takes Kendall down a peg, forcing him to reckon with the truth that — gasp! — not everyone likes him, or is laughing with him, and that this is still how many people perceive him, no matter what he tweets out. Even if he'd like to write off Shiv's statement as a mere power play, it is out there for the world to see, and from his own sister no less, which carries weight. Kendall has something of a breakdown and ditches the show, giving Sophie free rein to demolish him.  And while she calls him a few choice names, she acknowledges nothing could be as brutal as the letter Shiv had blasted out.

Kendall's pathetic blindness his own hypocrisy reminds us of one of his tweets that Sophie had highlighted previously: "We must overthrow the culture of corruption that silences women."

Sophie points out this is like a dog saying, "We have to punish whoever ate coffee grinds and s**t on the sofa #SofaJustice." (The "social justice"/ #sofajustice wordplay is just *chef's kiss*.)

She's not wrong — the tragic clownery of Kendall is his inability to fathom that he is a huge part of the very systems and crises that he publicly critiques with his fine-tuned social justice language and branding. It's unclear to what extent he knows this or is completely bereft of self-awareness.

"Succession" is rife with characters who are either aware of and proud of their own terribleness, or exemplify the privileged cluelessness of the 1% and philanthropic economic elites, who will always see themselves as the good guys, no matter how many people they screw over to maintain their opulent lifestyles. Where Kendall falls on this spectrum is ultimately to be seen. But the first episodes of this season certainly make a strong case that he skews more to the latter, and that he is the architect of his own Bad Tweets.

New episodes of "Succession" air on HBO on Sundays at 9 p.m. ET.