Between "Curb Your Enthusiasm" and "Succession," TV presents the fall (and rise) of old white guys 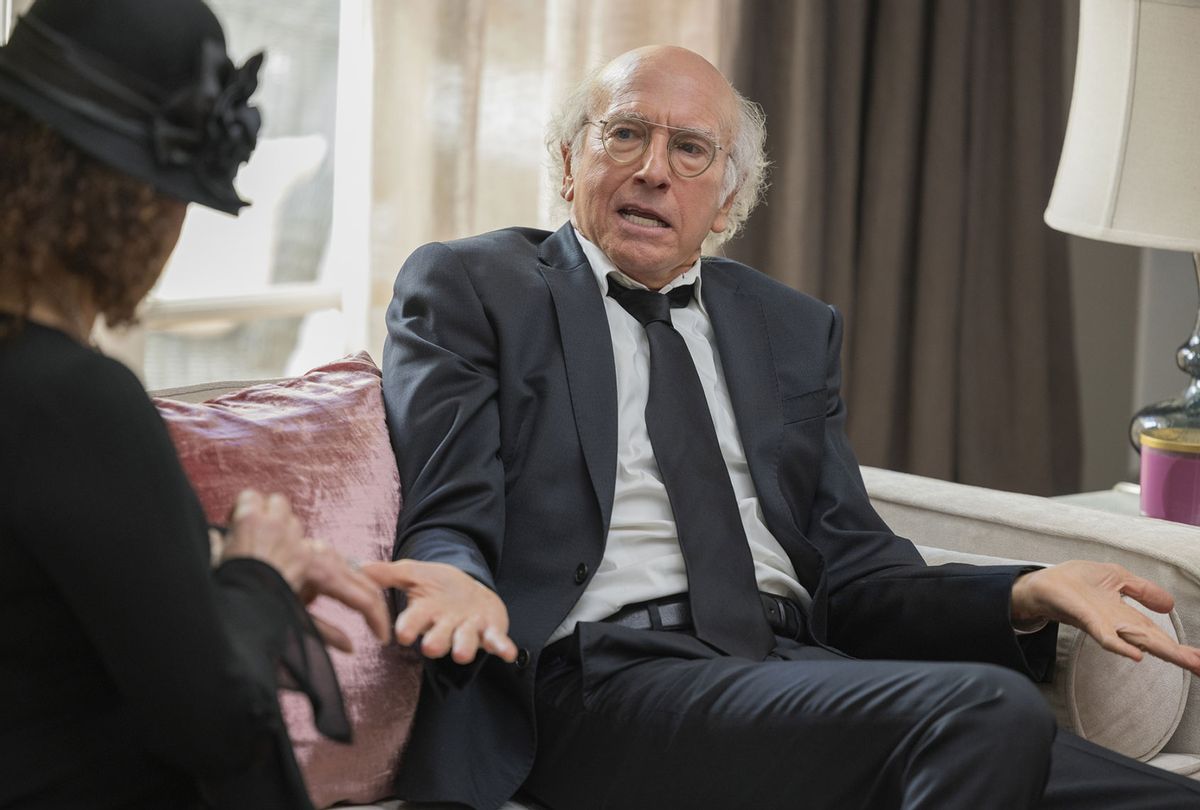 Larry David is perfectly content to remain in his California bubble. That principle has guided "Curb Your Enthusiasm" for more than 20 years, informing cringeworthy situations that result from Larry leaving his house to interact with other people or letting them into his domain.

But as the recently launched 11th season shows, neither he nor anyone else he knows can prevent old age from taking up permanent residence in their midst, nor lock death out of their lives. That's true for all of us, but few of us have enough money and influence to wildly distract us the inevitability of our mortality.

The premiere provides an example of this in Larry's confidante, comedian Albert Brooks, deciding to throw himself a living funeral, the product of having attended memorial services for five friends within the last three years. Losing loved ones can lead us to take stock of our own lives and think about whether we're living well or to the fullest. Unless you're a wealthy man like Brooks, to whom few people say no.

The fictionalized Brooks' grand takeaway from all this grieving is that he should be able to see and hear all the nice things people would say at his service while he's alive. "I can't stand that all this praise is going to somebody in a box," Brooks says to Larry in a "what a shame" tone he means to sound thoughtful and revolutionary, as opposed to coming off as an egocentric boob.

Between "Curb" and "Succession," Sundays on HBO are giving us a great view into the hearts and minds of rich old white guys. What we see does not inspire confidence, but whether on TV or in life, it rarely does. These bicoastal bookends to the premium channel's tentpole evening are emblematic of a season that's all about obscenely wealthy male Boomers.

In Congress, they're leading the charge to dismantle voting rights and hamper progress on infrastructure improvements. West Virginia Sen. Joe Manchin refused to join fellow Democrats in supporting a bill that contained provisions funding paid family and medical leave and aggressive but necessary climate change legislation, in part because he's an old guy who draws a significant portion of his wealth from the coal industry.

Utah Sen. Mitt Romney, a willful participant in the GOP's obstructionism, tried to funnel off some of the goodwill surrounding Apple TV+'s "Ted Lasso" to camouflage his lack of support for measures that would, for example, protect voting rights.

Each is the type of politician "Succession" media mogul Logan Roy (Brian Cox) would love to have in his pocket. He refuses to let the next generation take over because it would mean giving up that level of power, even though his main response to the federal investigators gathering at his gates has been, "Tell them to f**k off." This isn't because he knows what he's doing or that he's untouchable.

From a distance it may sound like a giant's roar. Up close, we can see Logan has reached a point in his life when "f**k off" could mean exactly that, or it masks fear and uncertainty, or it could be what's coming out of his mouth when he means to say, "I am having a stroke." Astronomical wealth buys him a favorable translation from the company he's in, which is why he surrounds himself with his power-hungry children and other sycophants.

Larry doesn't quite occupy that stratum of wealth and power in Los Angeles, but the "Seinfeld" co-creator can stroll into Netflix with his best friend and manager Jeff (Jeff Garlin) and sell them a bland pitch without much effort.

His proposed comedy is about, what else, another up-and-coming comedian based on a younger version of himself. This one moves in with his elderly uncle and does everything he can to accelerate his relative's demise. Hilarity is guaranteed to ensue because . . . look who's making it.

It's unlikely that HBO would allow one of its shows to feature their main competitor in a subplot unless the larger storyline is designed to be a dig at them. Instead of guessing where David is going with this, it's better to consider what he's showing us now. Here is a man whose life runs on complaints about etiquette breaches and minor irritations, whose entire claim to fame is that nothing good ever comes of leaving your house.

But this same guy can exhale a whiff of a passable concept and a production company with deep pockets will buy in, no questions asked.

The other side to this is that both "Curb" and "Succession" depict power and wealth as costumes that camouflage frailty. "Curb" makes that a central joke in the premiere, as if to acknowledge that David has been making this show on and off since October 2000, interrupting its run with a six-year break between 2011 and 2017. Despite his performative misanthropy and selfishness, he knows he's no spring chicken.

Hence, in the same premiere in which Albert Brooks caters his own wake while watching his friends eulogize him via a video feed viewed from the comfort of his king-size bed, Larry needles a friend rumored to have early onset dementia to pay him back for an expensive group outing, only to have his own mental acuity questioned after he walks into a glass door.

That accident – which, as he points out, could happen to anybody – botches his burgeoning relationship with Lucy Liu, a woman more than two decades his junior. Once the glass lays him out she loses all interest, responding to his sexual overtures after the fact by suggesting he go home, take a bath and wrap himself in a blanket to "get cozy."

Thus far, Larry has had success with younger women because he's a rich old guy. Some septuagenarians do have that kind of magnetism; we're not saying it's impossible any more than we're implying the season's rising stock in old guys only benefits miserable creatures. Charles-Haden Savage, Steve Martin's protagonist on "Only Murders in the Building" and another Old Man for Fall Season (and not a rich one, we should add), probably earned the comedian a few zaddy points by playing up the character's vulnerability.

Martin presents an excellent case of a late-career popularity resurgence in which neither the performer nor the character is attempting to play younger than he actually is. Charles is fine with being in his 70s and written to be respectful and platonically supportive of his neighbor and friend Mabel (Selena Gomez) while romancing his neighbor Jan like an old-fashioned gentleman, seducing her with a sexy game of Scrabble.

The Hulu show made this year a great one for Martin, and his co-star Martin Short, who not only makes a splash in it as Oliver Putnam, but turns up in a scathing cameo in "The Morning Show" and in a cameo via photograph in the "Curb" premiere.

Short's Oliver makes a running joke out of trying to seem younger than he is, something Larry never does on "Curb" while insisting, without success, that he's still quite virile. Age and aging isn't merely a joke in his Los Angeles, it's the joke. But its bite doesn't pierce him or his circle nearly as deeply as it does others.

Brooks only loses his girlfriend (played by Laura Kightlinger) when she finds out he's hoarding pandemic supplies along with all the other enablers attending the comedian's living funeral. They exit in a righteous huff, angry that they've been tricked into pretending to mourn a healthy, living man with a closet full of hand sanitizer and PPE.

They probably would have been more forgiving if Brooks were no longer around to defend himself or his life; no matter. They'll forget soon enough and welcome him and Larry back into their good graces, because that's how things work in these shows. An old millionaire TV star can be as unbearable as he likes, and an elderly billionaire can still be considered a colossus even if he can barely make the short walk to a podium to address his faithful. In these times of ours they're still big enough to assert their gravitational pull over us while we watch, transfixed, anxious to see what they do next.