With Showtime's sunshiny and sharp "Ziwe," we have an iconic talk show host in the making

Host Ziwe Fumudoh wields the art of the interview to find answers, and comedy, beyond her guests' comfort zones 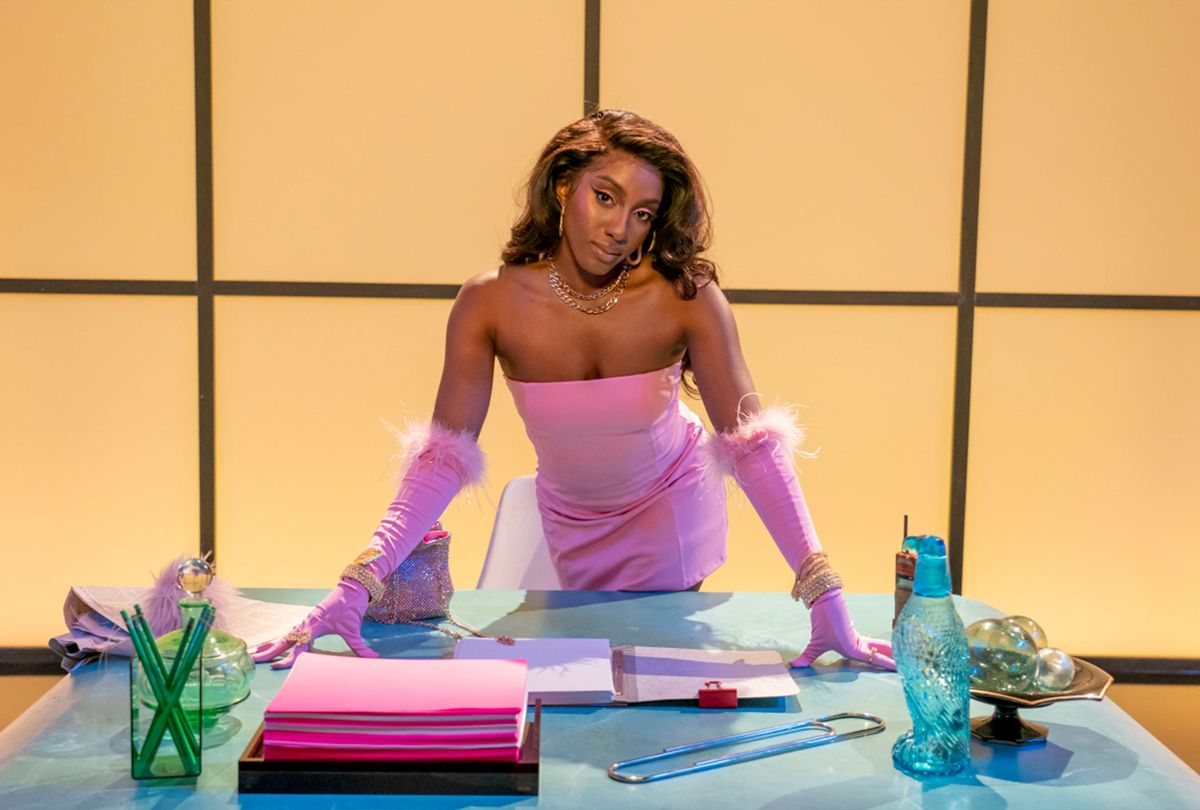 You'll know "Ziwe" star Ziwe Fumudoh has switched on if she's in your face. That's the signature move on her Instagram Live show, where she confronts most guests with any number of discomfiting questions like, "How many Black friends do you have?" Most of the white ones squirm and many equivocate, which is when Fumudoh moves in closer, still beaming brightly for her audience.

Contrast this with Fran Lebowitz, humorist and quintessential old school New Yorker. These days Lebowitz's core claim to fame is being the witty friend of legends like Martin Scorsese, with her defining trait being her arch sense of remove.

She never would have appeared on Fumudoh's Instagram show, mainly because of her widely known quirk of refusing to own a mobile phone. Regular TV talk shows, however, Lebowitz finds agreeable. Over the decades she's appeared on many hosted by men with whom America is familiar on a first name basis – David, Conan, Seth.

Fumudoh is in hot pursuit of mononym status with Showtime's variety-interview show "Ziwe"; although to her growing legion of fans she's already there. This is why landing Lebowitz as the featured guest on the series opener, "White Women," is such a masterstroke. Fumudoh's Instagram show tagline coos, "You'd be an iconic guest," in full awareness that most of the people she grills are up-and-comers with the occasional house fire (an Alison Roman here, a Rose McGowan there) popping up.

Whereas Lebowitz palled around with Mick Jagger and Anna Wintour, as a cultural icon does.

On the "Ziwe" series debut Lebowitz, identified via chyron as "Author, Public Speaker, White Woman," sits many feet away from the host.  A pandemic-era safety precaution, surely, but do not discount the theatricality at play here. To insist upon maintaining a "that's close enough" distance is its own type of power move, and usually Lebowitz is the one who sets that sort of yard line.

Here the author, public speaker and white woman is on Fumudoh's glossy rose-saturated turf, where the performer goes by Ziwe and, figuratively and ever so gently, closes the distance to a disconcerting closeness.

"I'm honored that you're doing the show," Ziwe says as she opens their conversation, "but my question is, why did you agree to this? Do you know who I am?"

Lebowitz does not, admitting that she mainly agreed to be on the show because a production assistant hounded her to the point that it became easier to say yes. At this Ziwe gives a shout-out the persistence of women of color, which Lebowitz meets with a deadpan, "Or any persistence."

The chyron changes in a "this just in" newsflash to read "Fran Lebowitz: All Persistence Matters."

Lebowitz isn't being played for a fool here. She isn't shy about promotion or fame either, or else she wouldn't have agreed to star a seven-part Netflix  series featuring her and Marty gabbing about New York City. One can also presume that from the moment Lebowitz stepped onto the brazenly girly "Ziwe" set, Lebowitz recognized it for the artistic put-on that it is.

But look at me, exhibiting the opposite of what "Ziwe" does, which is to decenter guests like her and obliterate the so-called fourth wall.

On "Ziwe" the understanding is that that the conversation is less about the promoting visitor than elevating the host. Fumadoh constructs the show as both a true star-making platform and a spoof of the same. Its opening credits list her as the star, executive producer, creator, musical performer and her own consultant. She has writers, some of whom are featured in the show's interstitial skis. The debut includes a parody of an American Girl Dolls commercial starring Jane Krakowski and Cristin Milioti.

But really, wink wink, it's all her and she wants you to know it. Her music videos interstitials glisten with self-promotion. Her costumes are their own show. It's all a gag, but it's also entirely serious.

In this respect "Ziwe," a hybrid of interview show and variety comedy, follows in the footsteps of shows like "Primetime with Jiminy Glick" and Zach Galifianakis' "Between Two Ferns"  or "The Colbert Report," each hosted by actors putting on outsized personas for giggles – and all of them white men. 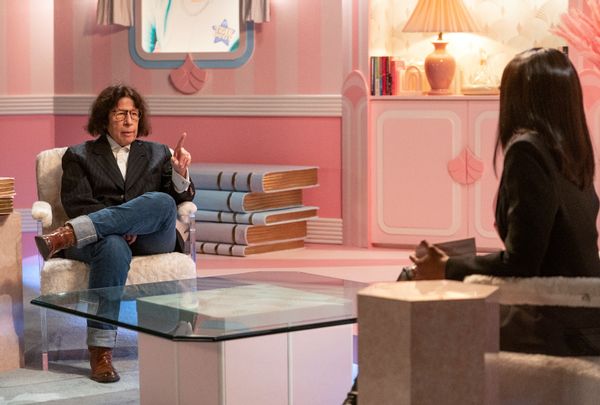 Colbert famously created a version of himself patterned after Bill O'Reilly, a bloviating conservative with hubris oozing from his pores.  Martin Short hides inside a fat suit to become Jiminy, whose quest is to make his guests break by bombarding them with aggressively clueless questions. Galifianakis, like Colbert, presents a fictional version of himself in "Between Two Ferns," but his alter ego is nervous, ill-prepared, pompous and intent on annoying his guests to the point of making them walk off set. Unless, of course, he encounters one who is unflappable.

But in the episode featuring Lebowitz, the best of the three made available for review, "Ziwe" elevates the jest starting by asserting herself as a Black woman leading this celebrity interview show and, related to that, making the audience know that this is her small piece of the world. The guests are there to bolster her rep, not the other way around.

Fumudoh's approach on "Ziwe" is as stylized as her sets and costumes, and while she positively gleams in every interaction her heightened persona is a weapon. The moving target is the question of whether her guests are in on the joke, as comedians Patti Harrison and Bowen Yang are in the "Wealth Hoarding" episode, or in Lebowitz's case, beyond caring whether people laugh at her or with her.

She takes another approach in next week's episode, "Beauty Standards," where "Real Housewives of New York" star Eboni K. Williams enters wearing the aura as Ziwe's equal, which the star does not dispel. When Ziwe asks Williams to sign a copy of her book for her, the reality star not only does precisely as Ziwe asks but shows off the Certificate of Authenticity included in her copy.

And this is a lovely bookend, if you will, to a field segment in which Ziwe visits a cosmetic surgeon to receive a consultation and he eventually suggests that her nose could look more "refined." What he means, and shows us by way of a digitized model, is narrower. Wow, right? And Ziwe, grinning, shoots some delectable side-eye toward the audience to acknowledge that, yes, this is indeed messed up.

These excerpts exemplify the more straightforward humor that drives that second episode and "Wealth Hoarding," two half-hours operating on the common assumption that neither Ziwe nor her guests require further introduction or explanation.

Ziwe's encounter with Lebowitz serves another purpose entirely. "White Women" opens with Ziwe pondering aloud why 55% of white women voted for Donald Trump (whose name she bleeps) in 2020, up from 51% in 2016.

Lebowitz, who identifies as a liberal and far to the left of President Joe Biden, doesn't answer that question with any memorable phrase. It's better than that. When Ziwe asks Lebowitz, "What bothers you more, slow walkers or racism?" Lebowitz huffs, "That's a real question?" before admitting that she encounters more slow walkers on a day-to-day basis.

Ziwe keeps going, "What percentage of white women do you hate?" Ziwe asks, adding, "And there is a right answer." As expected Lebowitz says there's no right answer, adding that she's less concerned about race than her host, inspiring the chyron to flip to "Fran Lebowitz: Less Concerned with Race." Some incredible comedy happens by way of those banners, which change with the flow of Lebowitz's self-important declarations: "Fran Lebowitz: Famously Accommodating White Woman"; "Fran Lebowitz: The Great White Hope" and "White Woman Has Opinion on Obama" are some of the top hits.

Nowhere in their conversation does Lebowitz distinctly verbalize her ideas as to why white women voted for the guy who lost the 2020 election or anything about white women generally, but she doesn't have to. By revealing her unapologetic solipsism and sharing observations that come from a place of pure egocentrism, Lebowitz acts out the answer.

Nevertheless Ziwe's admiration for Lebowitz is obvious, and although the host never loses control of this interview or any others in "Ziwe," her guests don't leave any worse for wear either. This is as true for Lebowitz as it is for a group of well-meaning regular women named Karen whom Ziwe handles gently in a segment later shown later in the same premiere. A couple of them blurt a bit of cringe, but the host steps back and lets the situation play out – and sure enough, a Karen within the group steps in and handles it.

The average Showtime viewer may not know Ziwe – yet – but they likely know her iconic guests and the merely famous ones. To see these celebrities simultaneously amused and bemused by her as she wraps uncomfortable questions in sunshine and approachable wit serves as its own endorsement for this delightfully subversive series. If they want to spend time with her regardless of how awkward the scene gets, why wouldn't you?