Much has been written about the HBO series' deep dive on family trauma. But what if it's actually a dog pageant? 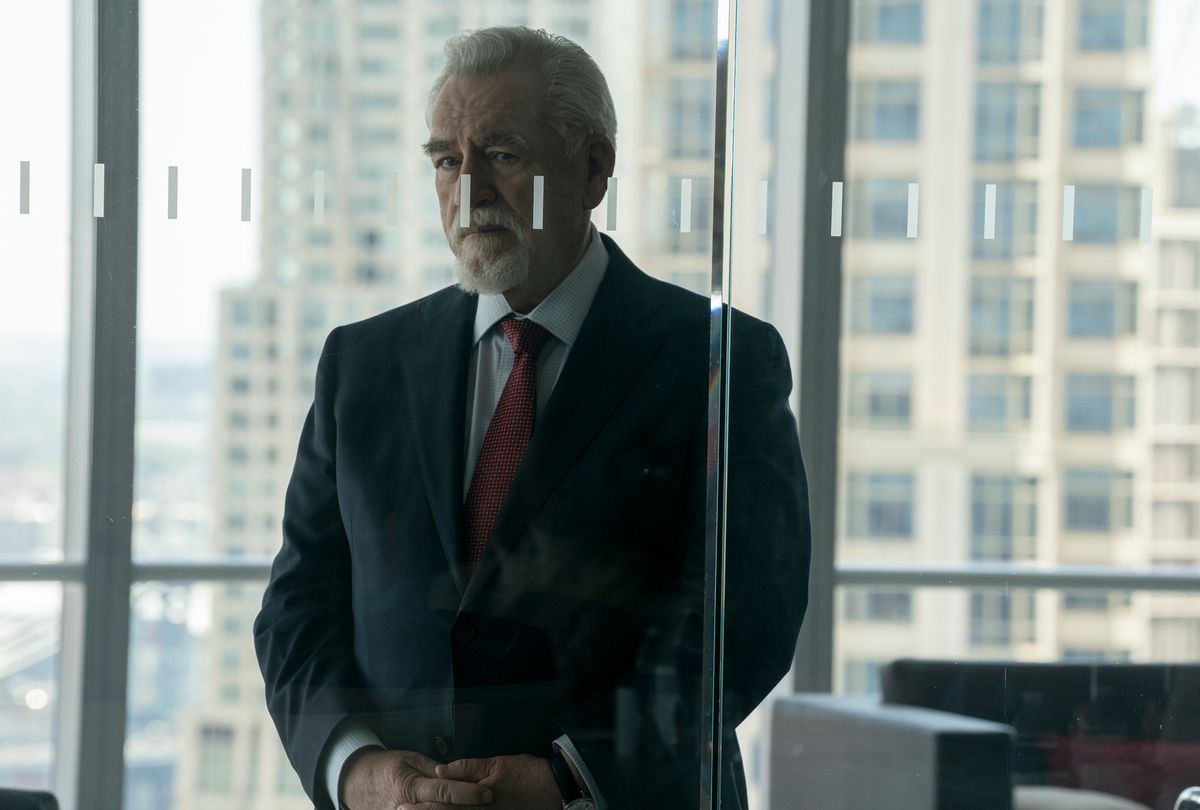 Brian Cox as Logan Roy in "Succession" (Macall B. Polay/HBO)
--

Over Thanksgiving more than 12 million people tuned in to the 2021 National Dog Show to see a Scottish Deerhound named Claire make history by taking home Best in Show, becoming the first repeat champion in the competition's history. That's a larger audience than the one for this year's Oscars; the highest-rated live awards telecast of 2021 drew 9.23 million viewers, slightly over half of the viewership that watched 2020's star parade.

If you're wondering how that relates to "Succession," perhaps the significance of the tense conversation Shiv (Sarah Snook) shared with her mother Caroline (Harriet Walter) escaped you. Their heart to heart is at the center of "Chiantishire," the penultimate Season 3 episode written by series creator Jesse Armstrong. It doesn't take up much time.

But it fragmentarily answers one of many enduring questions about the nature and purpose of Logan Roy's (Brian Cox) cruelty towards his children, and how that sadism plays into his reluctance to name his eventual successor.

RELATED: "Succession," Trump, and the end of the American myth of meritocracy

Caroline is the most absentee of mothers, a living ghost manifesting when it's convenient for her. In the main she's proof that Shiv, Kendall (Jeremy Strong) and Roman (Kieran Culkin) weren't sown in a "host chamber," to use a term Shiv drops on her husband Tom (Matthew Macfadyen).

Episode 8 invites the Roys to spend an extended period of time in Tuscany, and Caroline's world, as she prepares to marry a man who will probably drain her fortune. But when she and her only daughter sneak some time alone during a bachelorette excursion Caroline knifes the heart of the matter.

"Truth is, I probably should never have had children," she says, going on to add, "I should have had dogs."

"You could have had dogs," Shiv tells her.

"No, not with your father," Caroline counters. "He never saw anything he loved that he didn't want to kick it, just to see if it would still come back."

That much has been plain about Logan, particularly within the perverse glee he takes in curbing Kendall. His and Caroline's eldest is the only one who showed a lick of true business savvy beneath the cloud of his drug habit. The phrase "kicked puppy" comes to mind with that one, but all of Logan's kids are some breed of designer canine to him.

What is Shiv if not a red-maned Setter, brightly trotting about, eager to show her worth, and easily fooled into running after an invisible ball Logan pretends to throw? Consider Roman as a Pekinese – the breed that won Best in Show at this year's Westminster competition – realized as a small man-child who thinks he has weight to throw around and has a nasty habit of humping the leg of his handler Gerri (J. Smith-Cameron).

As for Connor (Alan Ruck) . . . who knows what kind of broke-down mutt he is?

But Caroline's insight about Logan's view of the world and its creatures tapes another piece onto the still incomplete key to breaking this man's code.

The Roys aren't Logan's children so much as the pets he cycles in and out of the room with slightly more regularity than his wives and mistresses. At Caroline's pre-wedding garden to-do she thrills at watching Logan's third wife Marcia (Hiam Abbass) enter to help him keep up appearances as the subordinate he's screwing prances at his heels. She also heeds Logan's orders, exiling Kendall, her own child, from her party to accommodate her ex-husband, who won't be seen with him.

"Succession" is singular in its gravitational pull with viewers, especially in an era where much-loved shows see fans turn on them by devoting a single episode to character development. Failing to move a season's action quickly enough brings vociferous complaints from the peanut gallery.

The Roys prove immune from such prosecution in a third season where nothing much has happened but character development. Kendall's threat to take down Logan and Waystar amounted to nothing, leaving him out in the cold and a public joke nicknamed "Oedipussy" by an edgy late night host (played by Ziwe). The writers spin gold out of the prison fears shared by Tom and Cousin Greg (Nicholas Braun), the most useless members of the family and therefore the handiest fall guys, only to have the Feds signal they would not be seeking charges.

Waystar's biggest investors threaten to pull their financial stake or enact a takeover, only to be placated. Corporate maneuvers don't excite the average viewer, anyway. Characters are where we put our investment, and "Succession" has bred enough beauties to make their devolution into a never-ending pageant of pets for Logan to abuse.

The most consequential action takes place at parties and retreats on this show, and "Chiantishire" is both  – a family reunion and a political gathering.

Its basic rich people's garden party fun includes Connor, having failed to win Logan's support for his political aspirations, proposing to his girlfriend and former sex worker Willa (Justine Lupe) only for her to pretend to accept while smiling in a way that says "Dumb dog, why are you following me?"

Tuscany also becomes Logan's stage to shatter Kendall anew. Caroline's lament hints at the special madness informing Logan's worldview, in that he's bred his children to be show dogs and punishes them for being unable to dominate in the dog-fighting ring.

At a private dinner Kendall insists upon, Logan displays his distrust by having his grandson taste his food before he'll eat it. The point of the sit-down was for Kendall to offer an olive branch in the form of asking to be disinherited with a (ridiculously generous) payoff and disinheritance.

But Logan refuses, informing his lost pooch that he's locked in his forever home. "Maybe I want you close," Logan growls. "You can do the mail. Keep you rattling around."

This is Kendall's payback for playing the Great Dane who caught the car and proving too dumb to know what to do with it.

To review, Kendall begins the season believing the world would see him as a knight riding in on a horse to take down his corrupt, heartless father. It doesn't take much to see he's still an empty suit – not a reformer, but one-time drug addict who, unbeknownst to most, is responsible for a man's death. Logan reminds Kendall of this when his boy tries to say he's better than his evil father.

"You're my son," retorts Logan. "I did my best. And whenever you f**ked up, I cleaned up your sh*t. And I'm a bad person?" From there Logan abandons his pup to dine on scraps. On a subsequent day we see Kendall collapsed on a pool float, loveless and face down, blowing bubbles in the water.

Then we have Shiv, tricked yet again into thinking Daddy would crown his Princess Pinkie at long last ("Go get the ball, girl! Get it! Where's that ball?") only to come up empty, destroying her lefty credibility in the process. Granted, she walks herself into that obstacle course, signing up to be used by her family as ATN's "sock puppet girl-boss president." Kendall harpoons her aspirations to power by arranging for Nirvana's "Rape Me" to drown out her speech during her first official appearance as an executive (in Episode 3, "The Disruption"). She never recovers from the gag, and Roman and Logan leave her out of meetings and important decisions from that point onward.

Shiv's immediate reaction to Caroline's revelation is to turn on Tom, dangling the leash of baby-making. He asks for dirty talk, which she fulfills by saying, "You're not good enough for me. I'm way out of your f**king league. But that's why you want me. That's why you love me . . . even though I don't love you. But you want me anyway." (Who can say why Tom didn't simply crank up The Stooges "I Wanna Be Your Dog"? It accomplishes the same thing.)

"Succession" excels at spreading the love equally among its major players, but this season marvelously brought Roman's twisted relationship with Gerri into full bloom. Gerri's instincts among the higher-ups may be the sharpest, and one wonders whether her training exercises with Roman aren't the key to her endgame. See, Roman has bold, terrible ideas. Like this one: At his urging, Logan anoints a fascist (Justin Kirk) who admits he'd be open to Hitler's "good pitches" at a secret, upscale gathering of kingmakers and politicians in the sixth episode "What it Takes."

By posing as his mentor while positioning him to take whatever fire comes her way, Gerri finagles her way to the position of Waystar's Acting CEO while stringing Roman along by feeding his domination fantasies just enough to keep him pliant.

On this trip she urges Roman to stop sending her photos of his penis, then persuades him to leave Tuscany to secure a deal with Lukas Matsson (Alexander Skarsgård), a Swedish madman behind the tech company GoJo. Acquiring Matsson's growing platform could keep Waystar in the streaming business, since its current app is terrible. But Matsson displays multiple signs of sociopathy, and tells Roman, flat-out, that his main fascination is failure, that he wants to fail fast.

How lucky that tiny dogs have a limited comprehension. Once the family returns to New York Roman brings Logan and the Waystar stakeholders a proposal of offering merger of equals to Matsson and Gojo, thinking it won't fly. Except it does, after Roman assures Logan that Matsson isn't a clown. "I know people, Dad," Roman yips. "I'm a people sniffer!"

And right when the good boy's steak is on its way over to his bowl, Roman pops his lipstick, texting a dick pic meant for Gerri to his father. Shiv, wisely, uses this to her advantage and encourages Gerri to turn on Roman. (Remember that passage in Jack London's "Call of the Wild" when the sled team tears apart one of their own as soon as it displays weakness?)

Logan faults not his pup but the hired handler, proposing that Roman fire Gerri as his punishment. But dogs are loyal to the legs they hump. Maybe Roman will decide Gerri is a kinder master than Daddy. This is where "Chiantishire" leaves us.

Logan's repeat manipulations is the "Succession" lover's kibble. His children keep falling for it, and we love to see it. But they've also learned, whether by witnessing or enacting defiance, how unwise it is to go against the man who made a fortune, as Kendall miserably point out, by using his right wing media empire to monetize all the American resentments of class and race. "And I thought I was just telling folks the weather," Logan quips.

If it were only propelled by the trauma the Roys inflict on each other, and if it were purely a satire of the Murdoch and Trump families, "Succession" would have lost its glow some time ago. But Armstrong and his team know the power of pageantry and our ceaseless obsession with gawking at expensive, pampered and pointless creatures.  Sometimes all we want is a world-class dog show. And what is Logan Roy's business model if not giving viewers the show he knows we want?