"Hawkeye" reminds us why Jeremy Renner's archer is the least Avenger 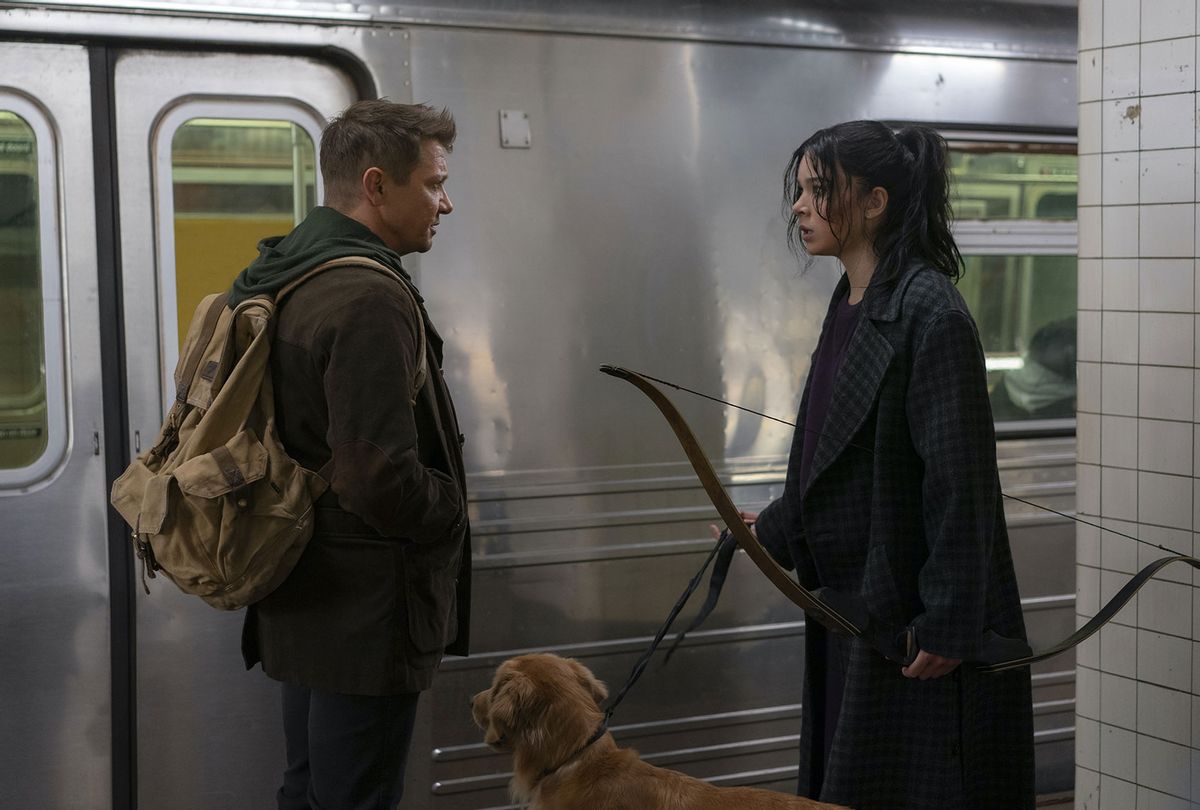 The opening episode of "Hawkeye" meets up with the mostly retired heroic archer operating in the uncharacteristic role of the powerless witness. Clint Barton is off the clock, having brought his kids to see a Broadway show during a holiday trip to New York City.  The musical in question, "Rogers," is a ludicrous ode to Captain America highlighted by the 2012 intergalactic invasion that the Avengers thwarted.

In that showstopper tune the Avengers' super-powered members are center stage as the actor playing Steve sings their praises, and Black Widow's double ridiculously high-kicks her way across the stage. But it takes a minute to notice whether Hawkeye is being portrayed, too. He is, but at first he blends into the background.

RELATED: "Black Widow" is a triumph for Marvel fans, yet that's what makes it so infuriating

Lining up all the heroes in the "Avengers" pantheon, Hawkeye is the one most people could probably take or leave. He's also the hero whom dedicated nutballs could persuade themselves they could actually become with enough archery training, protein powder, push-ups, "low T" supplements, yams, and inspirational speeches from Joe Rogan.

An unenhanced marksman who never misses his targets and is an expert in hand-to-hand combat, Clint is a problematic fave. While he's saved the world a few times, he outright murdered a slew of criminals in his guise as the Ronin when half the universe wasn't looking.

Renner hasn't done such a bang-up job of winning widespread endearment either. Infuriating headlines like "Jeremy Renner won't stop calling Black Widow a 'slut'" or "Jeremy Renner says it's 'not my job' to help female costars get equal pay" keep popping up in answer to questions of, "Remind me, why don't we like Jeremy Renner?" The good news there is that this proves how little time most of us spend thinking about Jeremy Renner.

Actors are not the characters they play. We know this. But some are happy to court the public's association them with the most popular of their fictional personas. Chris Evans, the actor behind the first Captain America, happily parted from Marvel while continuing to embrace the hero's nice guy reputation. It's good for his brand.

Renner approaches the whole hero business with a resounding "meh," which is his prerogative. Along the way he's been dogged by ugly allegations surrounding a custody battle with his ex-wife Sonni Pacheco, which he's either refuted or refused to comment upon, and still doesn't leave the most flattering impression.

Neither have we been trained to expect much from his solo efforts, like his very basic acid-washed jeans rock or his starring role as an organized crime "fixer" in the Paramount+ series "Mayor of Kingstown," a 2003-era brood fest that somehow time-traveled to 2021.

What does all this have to do with "Hawkeye"? Simple – it explains why a show named for the least of the world's mightiest superheroes works best as an introduction to the wonderful Hailee Steinfeld and her character Kate Bishop, set up via this series to inherit Hawkeye's mantle.

That makes "Hawkeye" the latest in a trend of properties named for or associated with alpha males being reforged as a female fighter's story. In the same way that Netflix's "Master of the Universe" animated series was not, in fact, about He-Man and "Mad Max: Fury Road" stars Charlize Theron's post-apocalyptic Amazon Furiosa, "Hawkeye" introduces Steinfeld's heroine as a wealthy young woman with a vigilante's soul.

This wasn't Kate's plan, to be clear. Danger comes into her house in the present day, the same way it dropped out of the clouds in 2012 and decimated New York, where she witnesses some of the battle and Hawkeye's derring-do from the blown-out window of her family's luxury midtown apartment.  She returns from her university's holiday break having destroyed a landmark while showing off her archery skills and discovers her mother Eleanor (Vera Farmiga) has become romantically involved with a snake-like jerk (Tony Dalton of "Better Call Saul," smartly employed here).

Kate can sense something's not right about the guy, confirmed when she tails him to a black market auction offering an array of contraband for the 1%. She gets no such hit off Clint, which she wouldn't since she's the latest in a line of women who make Hawkeye a better man.

This directly contradicts what much of the public knows or thinks it knows about Renner, a man who couldn't make it through presenting a Golden Globe without ogling and commenting upon his partner Jennifer Lopez's cleavage. Whether acting as a force lawful good or "taking out the trash" as an antihero, Clint Barton's charisma is increased by his proximity to one or both of the women in his life who could vouch for him, like his wife Laura (played by Linda Cardellini), or have, as best friend Natasha Romanoff (Scarlett Johansson) often did.

Kate continues this trend by informing Clint that he's her hero, something he views as more of a nuisance than a responsibility. Her Christmas wish is for him to help her become the superhero she's trained her whole life to be. His is to wrap up the inconvenient public resurrection of his shameful past in time to get home in time to carve the Christmas roast with his own daughter.

This erector set of a premise is made to charm, as if Marvel is asking both Renner and the public to lighten up a little by placing him in inside a Christmas-themed buddy action romp with the star of "Dickinson," a superb performer.

Steinfeld deserves a better introduction than this piece of tinsel which, in its first two episodes, never transcends the rating of fine. Nevertheless, her presence and performance elevate a story into which Hawkeye has glaring downward in disappointment before eventually figuring out how to have fun again.

This scenario makes one wonder if Marvel's noticed that when Florence Pugh's Yelena Belova received orders to assassinate Hawkeye in the "Black Widow" post-credits sequence, more than a few people were into the idea  – and may have been rooting for Yelena's success. (Pugh is confirmed to appear in "Hawkeye.")

To be fair, Renner and Hawkeye have their fans, otherwise he would not be toplining this show. His (likely Dockers-wearing, American pick-up driving, dog-loving) constituency still loves him for his excellent performance in "The Hurt Locker" and, remembering how well he and Taylor Sheridan worked together in 2017's "Wind River," are committed to seeing whether "Mayor of Kingstown" goes anywhere.

Next to that gloom "Hawkeye" is a sugar plum hit teasing us with the prospect that Kate can somehow help Clint shed his Grinch persona and help him to turn around what she calls his branding problem. "People want sincerity," she says while championing the cause of wearing one's heart on one's sleeve.

The man called Hawkeye may have to be reminded of that, but the audience already knows that to be true about Renner himself. He trades in an image of being rough, unvarnished and real, a guy who told Men's Health in a recent profile that he'd rather collect and restore decommissioned fire trucks than slap his name on a vanity tequila brand. "So f**k you, Ryan Reynolds or George Clooney or whoever," he tells his interviewer. "I'll come put out the fire on your agave farm."

Good one, as long as you forget Renner's role in the Great Jeremy Renner Vanity App Debacle of 2019. We very well might by the end of the six-episode run of "Hawkeye," which could shape up to be the most forgettable Marvel Cinematic Universe property since "Iron Man 3" and make Renner's Hawkeye fade into the curtains yet again. But he's an Avenger of a bygone era.  As long as Renner doesn't dim Steinfeld's light we'll be fine to see him step back to let the next generation shine.