Vegetables can ragù, too

Who says meat has to be the main ingredient in ragù, anyway? 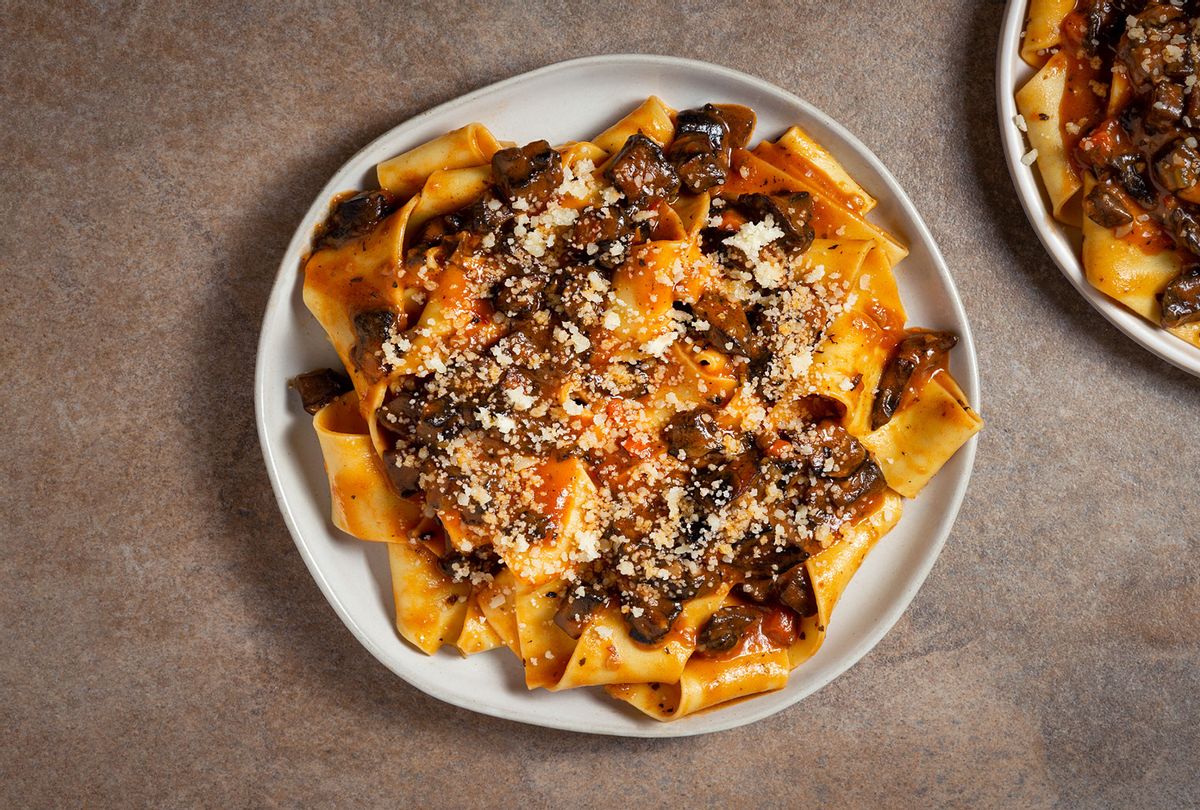 The Italian word ragù traditionally conjures a long-simmered meat sauce rich with aromatics and tossed with pasta. But who says meat has to be the main ingredient, anyway? A few successes cooking down whole cauliflower and broccoli into rich, flavorful pasta sauces got me thinking about the boundless possibilities of slow-cooking earthly delights into concentrated submission. So, I thought I'd dig a little deeper with help from two experts in Italian-inspired plant cookery.

But before we test said parameters, let's establish them, semantically. Ragù refers to a class of long-simmered Italian pasta sauces traditionally made with ground or minced meat, vegetables and (occasionally) tomatoes. (Bolognese actually falls under the ragù umbrella; the two technically aren't interchangeable.) Ragout, on the other hand, is a slow-cooked French-style stew that can be prepared with meat or fish and vegetables — or just vegetables. Then there's sugo, which broadly means sauce, though it suits our contextual purposes well here, as Virginia-based cookbook author and Italian cooking teacher Domenica Marchetti tells me.

"There's a sauce in Italian called sugo finto, and that means 'faked sauce,' referring to a sauce that has no meat in it," Marchetti says. Harking to a time when meat was a rarity and luxury for many Italians, home cooks would mince and cook down ragù's vegetarian building blocks — say, carrots, celery, onions, parsley and garlic — then add tomato and bay leaf and cook it as though braising meat, without the meat. "It's really the most basic of Italian sauce ingredients, but if you let it cook enough and get to a nice thickness, it can definitely qualify as a ragù. You can even toss a parm rind in there."

This resourceful spirit carries over to a simple onion ragù based on Campania's la genovese, which Marchetti came up with for her excellent 2011 cookbook, "The Glorious Pasta of Italy." In the traditional version, beef chuck cooks down for hours with lots of onions and (less) celery and carrot. The silky, beef-infused onion sauce gets spooned over the pasta primi course before the chuck roast arrives as the fall-apart main event. In Marchetti's veg-friendly "shortcut genovese," she caramelizes then simmers a heap of sliced onions with marjoram, tomato paste, Marsala wine and beef or vegetable broth.

It's "as though you're going to make onion soup," she says. Instead, you toss that velvety, pinkish melange with ridged penne or rigatoni and finish with sharp, salty pecorino cheese. (You'll find the recipe for this wintry celebration of the allium below.)

From here, Marchetti and I unpack the ragù potential of everything from squashes ("I love winter squash with tomatoes!" she says) to legumes ("I've yet to try lentil ragù!").

Before long, she realizes that the clean-out-the-fridge pasta she's planning for that very evening qualifies as ragù, too. Cubed eggplant fried in oil joins diced sautéed red onion, garlic, red pepper flakes, chopped mixed olives and milled tomatoes, then bubbles away with rosemary, oregano, thyme, parsley, mint and basil. A splash of balsamic vinegar finishes the tangy, savory sauce before she tosses it with pasta. (Later, we unofficially dub this caponata ragù.)

"That's the beauty of pasta," Marchetti says. "So much goes with it."

RELATED: This is the best-tasting and, arguably, most Italian carbonara I've ever made

Of course, we can't really talk about vegetable ragù without addressing the meatiest veg of all: the mushroom. So I call on Chicago executive chef/proprietor Joe Frillman, who happens to make one of my all-time favorite mushroom ragùs at his Midwestern pasta restaurant Daisies. This rich, decidedly chunky sauce starts by large-dicing and searing meaty portobellos, which are removed before the pan gets deglazed with white wine previously used to rehydrate dried porcinis.

The plumped, chopped porcinis go in next along with parsley stems, bay leaves and a few ladlefuls each of pomodoro sauce and mushroom stock, which the restaurant cyclically fortifies with mushroom stems and trimmings. Once the sauce reduces to pasta-clinging consistency, the caramelized portobello pieces are added back, and the ragù is tossed to order with eggy ribbons of housemade pappardelle.

"It's a direct translation of the pork ragù I've done my entire career — just subbing out pork for mushrooms," Frillman says. "To mimic that texture, we have to keep the mushrooms in big pieces. To me, giant chunks are indicative of ragù."

At Frillman's independent, vegetable-centric restaurant, like so many home kitchens throughout the centuries, inventive veg ragùs are partly a financial necessity — maximizing and cross-utilizing every produce item that comes through the door. In Daisies's broccoli ragù, line cooks braise the fibrous stems, then shave and deep fry the florets for garnish. For pumpkin ragù, most of the gourd is braised with carrot and onion in stock made from veg trimmings, then larger-diced pieces of pumpkin are added towards the end of cooking — and not just because Frillman has exacting opinions on ragù's chunkiness.

"Textural variation goes so far in food," he says. "It adds this intangible — you don't necessarily think about it, but subconsciously, you're like, 'Why is this so good?' It's because you're hitting that balance of salt, umami, sweetness, acidity and texture. Texture is one of those things, as well."

It's also out of a deep respect for and understanding of the vegetable to augment each part to its fullest — braising its fibrous stalk, sautéeing its leaves, pickling its roots, deep-frying its florets and so on. In this spirit, Frillman and I proceed through the ragù-ing potential of everything from beets ("finished with dill and smoked trout roe!") to multiple iterations of celery in a single dish ("fermented and dehydrated roots, braised stalks and thinly shaved leaves!") and, finally, carrots.

"Wait, carrots?" I impulsively protest. "I don't love cooked carrots — they're too sweet."

But Frillman won't be so easily deterred. "Think of a Middle Eastern-inspired carrot sugo situation with onions, za'atar and garlic — maybe cut with some amaro-plumped raisins," he says.

The beauty of working with vegetables in this context, he reminds me, is that I don't have to cook them to death to achieve the texture I want.

And when all else fails? "Add a little more butter or olive oil," he says. "Fat solves everything." 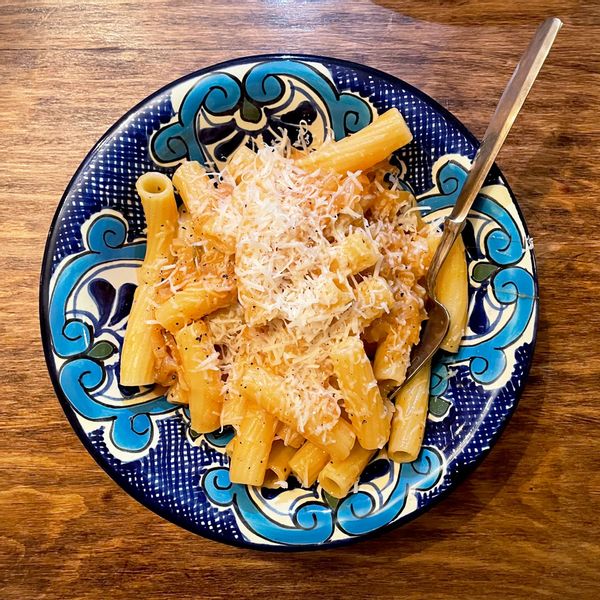 A note on the recipe

All too often, onions play a flavor assist role in our dinners, which is why it felt fitting in this ode to veg ragù to uplift this magnificent, economical allium to star status with Domenica Marchetti's brilliant shortcut genovese. The slow-cooked onions take on a velvety texture and intense, savory-sweet flavor — deepened with the addition of nutty dry Marsala, meaty tomato paste and broth. A finishing blizzard of pecorino balances the caramelized sweetness with a top note of piquant saltiness, making for a lush and satiating Sunday dinner that will be known hereafter to me as Domenica's onion ragù.

Slightly adapted from The Glorious Pasta of Italy (Chronicle Books, 2011)

Warm the butter in a large, heavy-bottomed saucepan over medium heat. When the butter is melted and begins to sizzle, add the onions and stir to coat them well with the butter. Sprinkle in the marjoram, salt and a generous grind of pepper. Reduce the heat to medium low, cover and let the onions cook, stirring occasionally, for 15 or 20 minutes, or until they wilt. Uncover and cook for one hour. Be sure to stir frequently to ensure even cooking and to prevent scorching. The onions are done when their volume has reduced dramatically and they're very soft and golden.

While the onions are cooking, bring a large pot of water to a boil and salt generously.

Add the pasta to the boiling water, stir to separate and cook according to the manufacturer's instructions until al dente. Drain the pasta in a colander set in the sink, reserving about 1 cup of the cooking water.

Transfer the pasta to the saucepan and gently toss the pasta and sauce to combine thoroughly, adding a splash or two of cooking water if necessary to loosen the sauce. Sprinkle in the pecorino and toss to combine well. Transfer the dressed pasta to a warmed serving bowl or shallow individual bowls. Sprinkle additional cheese over the top, if you like, and serve immediately.

More food and inspiration from this author: