Observations from a Chicago Dunkin’ Donuts 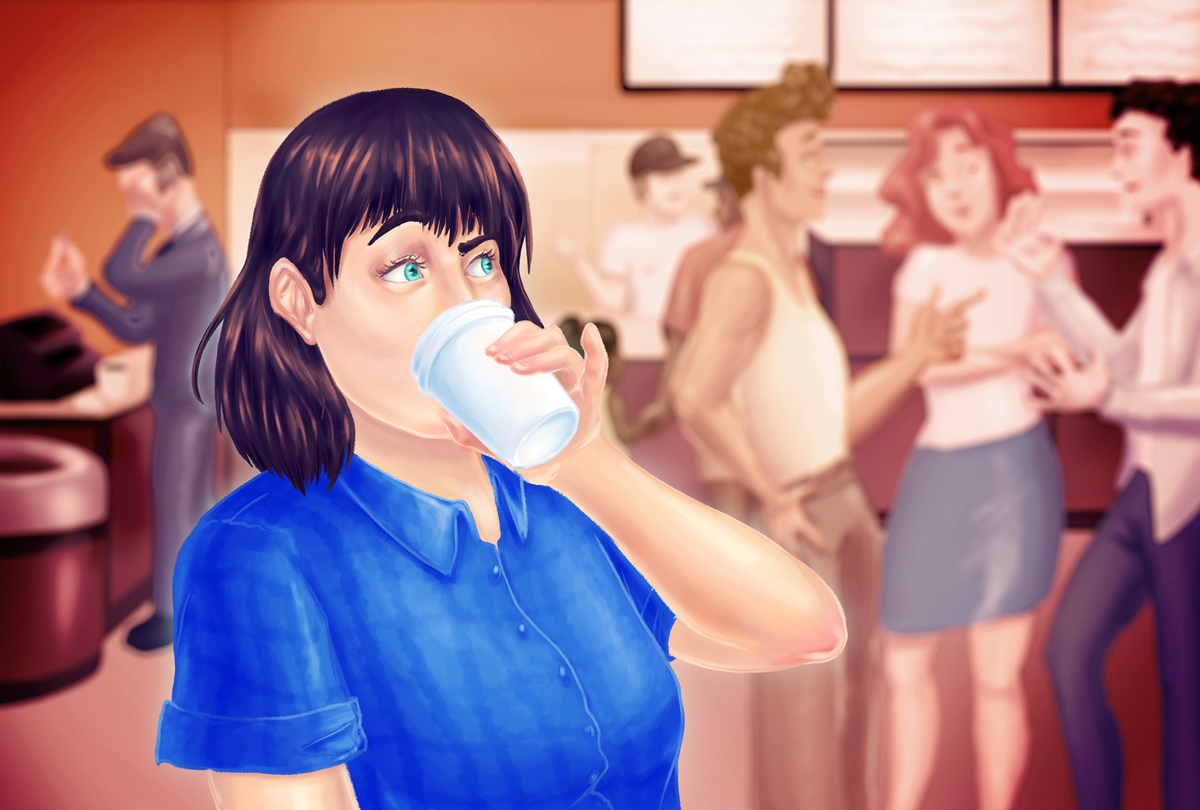 It's just after 7 a.m. under a milky Chicago sun in mid-July, and the temperature has already reached 80 degrees as I walk into the Dunkin' Donuts near my house. While I await my large with lite cream, a husky man pulls up in his Chevy and orders a large black with a little ice.

It's been a year and a half since I spent more than five minutes inside a coffee shop, so I park myself in a Dunkin'-orange pleather barrel chair near the register. I like this location. Perched on the corner of a busy east-west street halfway between a highway entrance and an El stop in the middle of a fast-gentrifying neighborhood, it feels particularly consequential — and like a microcosm for the city itself.

RELATED: How to brew a better French press coffee, according to an expert

In the hourish I spend at Dunkin', all kinds of people pass through — painters in Jackson Pollocked boots, electricians and a construction worker perpetually stretching his sore shoulders. A bearded 30-something with a laptop bag slung over his shoulder wordlessly grabs a pre-ordered, large black iced. A garbage collector and a delicately tattooed art student both order blueberry cake donuts. An older man in Wranglers and cognac-hued alligator shoes gets a small decaf, followed by a youngish woman in a flouncy pink dress who stirs a couple of Splendas into a large iced with skim. A trim man in skinny jeans and pristine white sneakers; a woman in cargo sweatpants and a coffee-themed logo tee; a city worker haloed in musky cologne; more Blackhawks, Cubs, Sox and Bears gear than I can count.

More than a third of the patrons pay in cash. Almost no one takes advantage of Dunkin's now extensive specialty-coffee menu, which includes all manner of flavored lattes and macchiatos. In an hour's time there's a single ask for oat milk. Nonetheless, the very subjective morning coffee order is on full display.

Not once is there a lag between drip coffee refills; iced coffee likewise appears to be in endless supply for the relentless stream of customers. After consecutive rushes ravage the cruller and double-chocolate donut baskets, the pastries rematerialize in neat rows within seconds.

"How do you get up so early?" one employee marvels at another, who'd been up since 3. "Yo no puedo levantar."

A lot of customers bring in trash from their cars to throw out — old receipts, orange parking ticket envelopes and takeout bags. Some stay on their phones the entire time they order, mouthing "sorry" to the untroubled cashiers.

"Is that a Tesla?" a woman asks the man standing with her in line, nodding toward the shiny black car through the window. (Tesla guy is already on his way out, dressed for golf and bearing a large iced with cream and a cruller.) "Yeah," her companion replies. "Did you know they're making electric trucks now?"

Among the more consequential headlines I skim through on my phone this morning, India's true pandemic death toll is likely to top 3 million, staggeringly more than the 414,000 officially recorded deaths. Jeff Bezos, the richest human in the world, goes to space, then publicly thanks his employees for footing the bill. A wildfire in Oregon is so big and hot that it's generating its own weather systems. I realize that the smoke plume engulfing the Northwest would explain this third straight day of haze in northeastern Illinois.

A lull hits around 8:15, and I notice that "Juicy" by Notorious B.I.G. has been playing on the radio. I get up and head back into the watery sunlight with a few lukewarm sips left in my cup for the walk home. I hold the door for a woman in scrubs who's juggling two mediums and a bag of donut holes. Line painters out front are almost finished painting new crosswalk stripes; the iced coffees they ordered earlier are no longer iced.

Behind me, the parking lot starts filling up again. A couple's Jeep almost gets rear-ended as they pull over where there's, admittedly, nowhere to pull over. As the car behind them lays on the horn, the woman in the passenger seat flies out toward Dunkin's double doors.

Inside, another rush has started.