To argue that white supremacy hurts white people confounds many Americans. But the evidence keeps on mounting 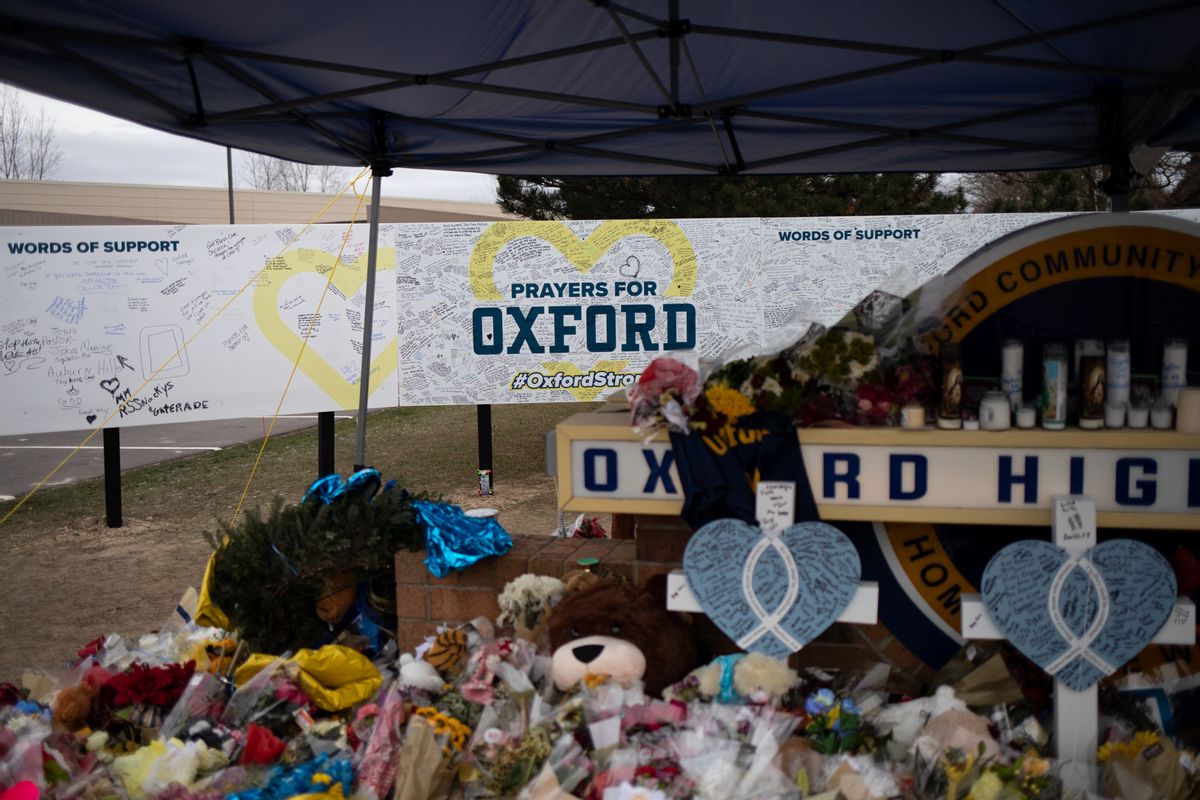 A board where community members can share words of support alongside the memorial outside Oxford High School in Oxford, Michigan. On Nov. 30, four students were killed and seven others injured when student Ethan Crumbley allegedly opened fire with a pistol at the school. (Emily Elconin/Getty Images)
--

There is no area of American life that has not been impacted by the color line in a society where white people are granted unearned advantages over nonwhite people. This is not an opinion, but an empirical fact. American society is literally structured by racism and white supremacy.

In the United States, racism and white supremacy constitute a power relationship that both actively and passively causes harm to Black and brown people because of the color of their skin and the value Western societies have assigned to it.

But they are not the only ones damaged. However counterintuitive this fact may be for some people, racism and white supremacy often hurt white people too.

Let's examine one recent example. On Nov. 30, a 15-year-old high school student named Ethan Crumbley allegedly went on a shooting rampage at his high school in Oxford, Michigan, killing four of his fellow students and injuring seven other people. Crumbley surrendered to law enforcement — which is somewhat unusual in mass shootings of this kind — and has been charged with terrorism and first-degree murder, among other crimes.

His alleged rampage was not a total surprise, but part of a much larger pattern of behavior. There had been indications for weeks (including posts on social media) that Crumbley appeared to be mentally unwell and a danger to himself and others.

Teachers and school administrators met with the young man and his parents about his behavior, which included violent drawings and verbal threats, and also spoke with him separately on several occasions. One meeting with Ethan Crumbley and his parents took place only hours before the shootings. Law enforcement could have been included in the meetings by school officials but were not, and the young man's backpack was not searched on the day of the shooting. If it had been, presumably school officials would have found his gun.

A teacher had also alerted school authorities that Ethan Crumbley was searching the internet on his phone for information about various types of ammunition. Instead of punishing him or seeking help, his mother, Jennifer Crumbley, sent him a text that read, "LOL, I'm not mad at you. You have to learn not to get caught."

With that behavior, Jennifer Crumbley showed herself to be exactly the kind of mother that Rep. Madison Cawthorn, the far-right North Carolina Republican, has publicly encouraged to raise their sons as "monsters."

Ethan Crumbley was allowed to return to class after his meetings with school officials, including on the day of the massacre. He allegedly used a 9mm semiautomatic pistol that his father, James Crumbley, gave him as a gift four days before the killings.

After their son was arrested for his alleged crimes, James and Jennifer Crumbley fled the area. They were eventually found hiding in a partly abandoned industrial building in Detroit, about 45 miles south of their hometown. If these fugitive suspects had been Black, brown or Muslim it is entirely likely that they would have been killed by law enforcement. Instead, they were arrested unharmed. Their son was afforded the same type of privilege after allegedly committing mass murder.

Crumbley's parents have been charged with involuntary manslaughter and other crimes. They have also been given the option of going free on bail before their trial — even after they already violated the law by (apparently) attempting to escape to Canada. Again, if the Crumbleys were not white, bail would either not be granted or imposed at an extortionate level.

How many lives might have been spared in Oxford, Michigan, if not for the power of racism, white supremacy and white privilege?

Because gun violence is not generally treated as a public health emergency, and because white privilege tends to erase the role of whiteness and white masculinity in gun violence,  this society-wide problem has not been properly addressed — except for the ritual stupidity of "thoughts and prayers."

The vast majority of school mass shootings are committed by white boys and white young men. As a result, they are seen as individual, anomalous events, rather than as a societal problem demanding intervention and resolution.

When it comes to Black and brown young people accused or suspected of even minor criminal activity, white supremacy punishes them -- all too often in extreme ways. Through what has been called "adultification," Black and brown children, even when extremely young, are perceived as inherently dangerous, and not permitted the presumed innocence, vulnerability and need for care, concern and love that society typically grants white children and other young people.

As a result, Ethan Crumbley was presumed to be innocent and incapable of hurting others. By comparison, Tamir Rice, who was 12 years old and playing with a toy gun in a park in Cleveland, was shot and killed by police only seconds after their arrival. Trayvon Martin, 17 years old, was stalked and killed by a street vigilante who was later acquitted of murder.

Black and brown boys and girls are punished much more severely in American schools, compared to white students, for the same offenses.

Ethan Crumbley and his parents are the product of an American gun culture rooted in a centuries-long history where guns were used to commit genocide against the continent's indigenous peoples and also to dominate and control Black people, whether enslaved and free. Guns were also central to a larger project of empire and expansion that involved the subjugation of nonwhite people in many different parts of the world. White America's relationship to guns and violence as an exclusive element of "white freedom" is also central to the Republican fascist project.

Quite predictably, Ethan Crumbley's mother is a member of Donald Trump's political cult, a movement fueled by white supremacy, misogyny, sadism, anti-intellectualism and other antisocial tendencies. In a letter to Trump, Jennifer Crumbley wrote:

Mr. Trump, I actually love that you are a bad public speaker because that showed sincerity, and humility. You changed your mind, and you said "so what." You made the famous "grab them in the pussy" comment, did it offend me? No. I say things all the time that people take the wrong way, do I mean them, not always. Do I agree that you should of shown your tax returns? No. I don't care what you do or maybe don't pay in taxes, I think those are personal and if the Gov't can lock someone up over $10,000 of unpaid taxes and you slipped on by, then that shows the corruption. I like that you have failed. I love it even more that those failures taught lessons and made you one of the most successful Business Men in my history.

I love that you are not from the political spotlight, maybe you are the hope that can really uncover the politicians for what I believe they really are. I have high hopes you will shut down Big Pharma, make health care affordable for me and my MIDDLE CLASS family again. I hope you uncover the cure for cancer, because there is one, we all know it, but you are the one to prove it. I'm not scared of your big personality and quick temper….

My parents teach at a school where their kids come from illegal immigrant parents. Most of their parents are locked up. They don't care about learning and threaten to kill my mom for caring about their grades. Do you realize Mr. Trump that they get free tutors, free tablets from our Government so they can succeed. Why cant my son get those things, do we as hard working Americans not deserve that too?...

I believe YOU are the President who will make these things happen. I have NEVER had this much belief in one person, and you are it.

If this blog even makes it to your eyes…thank you. From the bottom of my heart.

A hard working Middle Class Law Abiding Citizen who is sick of getting fucked in the ass and would rather be grabbed by the pussy.

Moreover, discussions of the Crumbley family in mainstream news media offer an example of how even the lethal and criminal behavior of individual white people is never presented as representative of white people as a group or whiteness as a social identity. If the Crumbleys were Black or brown or Muslim, or members of some other marginalized community, the dominant narrative would focus in on their "bad" or "neglectful" parenting with questions about "the family" and "fathers and male role models," "irresponsible mothers" and "the values of the larger community." Fox News and the larger right-wing echo chamber would have turned them into horrifying bogeymen, and focused on them for weeks.

The allure of this notion of armed white male power makes sense in many ways. Who wouldn't be tempted by a platform that claimed to increase one's privilege, power, safety, and authority? However, again, the math and the graphs suggest the dangerous, mortal underside of linking privilege so closely to instruments of warfare and of then supporting politicians and policies that all allow these instruments to be ever-more easily allowed into people's everyday lives and intimate spaces. The data overwhelmingly suggests that more guns mean more deaths, and particularly so for those very people whose privileges and potencies Man Cards and pro-guns policies claim to restore….

As this process plays out, the peril to white men comes not just from the instrument, the impulse, or even the legislation. Rather, privilege itself becomes a liability. White men themselves become the biggest threats to … themselves. Danger emerges from who they are and from what they wish to be.

American's public discourse does not create space for the kind of language that would be necessary to persuade white people that racism, white supremacy and white privilege are hurting them too. Indeed, as we see in the tragic gun massacre at Oxford High School and far too many similar incidents, white privilege is literally killing white people. For too many white people, this has become impossible to see: They value the psychological and material wages of whiteness — which are not dispensed equally among all white people — more than they value their own lives and those of their children, their families and their communities.

More on the rebranded white supremacy movement of the 2020s: