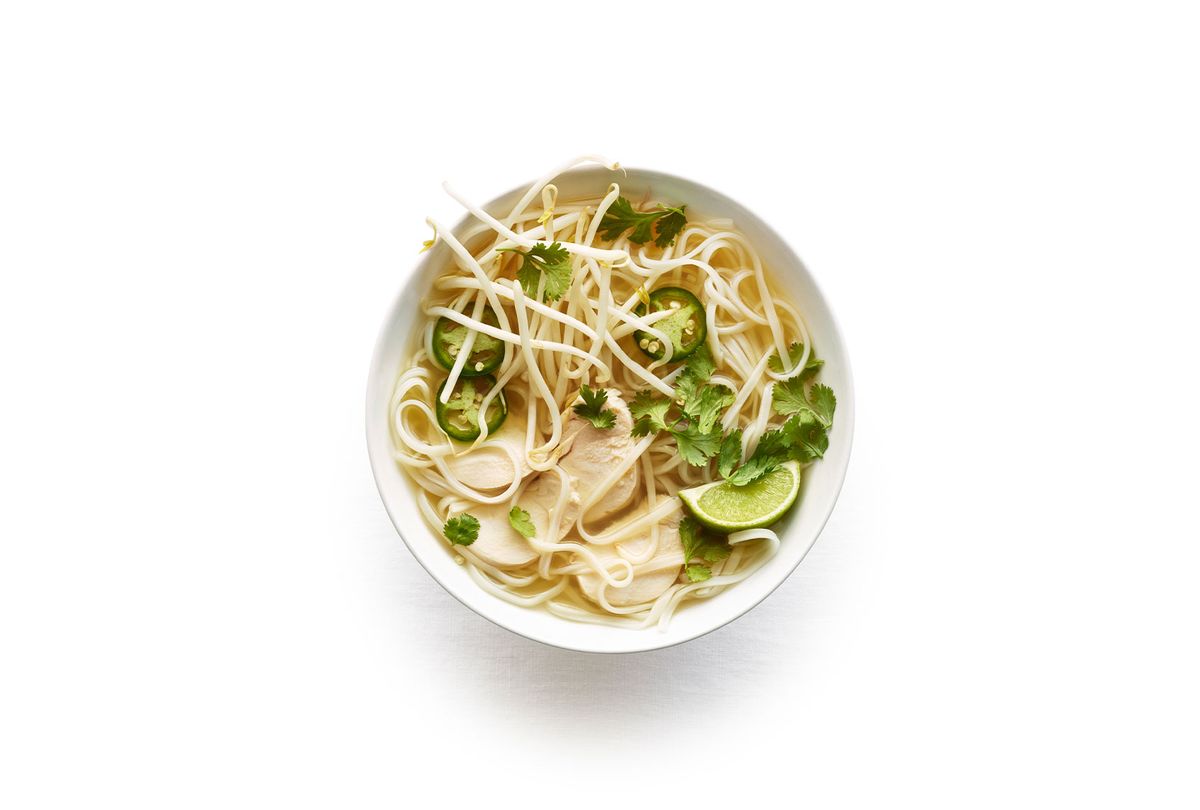 Chicago's Little Vietnam, a crowded strip of businesses clustered around the Argyle Red Line stop, seems to come to life just a little earlier than the rest of the city — especially on winter weekends. After sunrise, as the fog hovers level with the red paper lanterns strung through the trees that dot the sidewalk, folks pull open the doors to restaurants like Pho 888 and Nhà Hàng Vietnam Restaurant, causing a rush of steam to erupt as the blasting heat momentarily meets the crisp air.

Once inside, they're greeted by a muddled symphony composed of a few reliable sounds: the plink-plink of Café du Monde percolating tableside; the drone of a small TV set to local cable; and the light spoon-scrapes and gentle slurps associated with generous bowls of pho.

Pho, which is considered Vietnam's national dish, is a deceptively simple soup consisting of rice noodles, a shock of green herbs like mint and basil, meat and delicate broth. It's considered an ideal breakfast, since it's hearty enough to start the day but not so heavy that it weighs one down before work.

This is the case in both Vietnam and Vietnamese-American enclaves throughout the U.S. So much so that Alex Lam, the owner of Vietnam Kitchen, my favorite Vietnamese restaurant in Louisville, Ky., recently told me that his business survived for the first few years by serving early morning "$2 iced coffees and bowls of pho" to other resettled Vietnamese refugees in his neighborhood.

However, soup of any sort remains, in many Americans' minds, a lunch or a dinner dish. America is one of the few regions that doesn't have much of a soup breakfast tradition, though it isn't completely devoid of one. Perhaps this winter is the time to change that, borrowing inspiration from countries where soup is considered one of the best ways to start the day.

"In the Jewish Moroccan household I grew up in, harira was served on colder evenings in the late fall and throughout the winter as a dinner soup," food writer Liz Vaknin told me via email. "We would eat the leftovers for lunch, and it was the kind of lunch that made you sleepy and put a silly smile on your face. When I traveled to Morocco a few years ago with my father to learn more about my roots, I discovered (to my delight) that the soup was served for breakfast during the colder months, and I absolutely fell in love with the idea."

Harira, as Vaknin describes it, is a velvety smooth tomato-based soup, spiced with warming cinnamon and ginger and earthy cumin and cilantro, and fortified with lentils, chickpeas and even thin pieces of noodles. It can be made with lamb, chicken or beef, but the version she grew up eating was vegan.

"There wasn't a single breakfast buffet at the hotels we stayed at that didn't serve the soup for breakfast, and since then, I've readily adopted the idea at home," Vaknin said. "After sharing this find with my mother, I learned that her family would make harira for breakfast, too. It was only when she and my father moved to the U.S. that she stopped making it for breakfast because 'it just wasn't something that Americans did.'"

That's not totally accurate, though I didn't realize this until reading Lauren Shockey's 2019 book "Hangover Helper," which includes an entire chapter of hangover soups and stews, which as Shockey puts it, "weave a common thread through the tapestry of global hangover cuisine."

Some of these — like Japanese ochazuke, a simple soup featuring rice and other savory bits partially steeped in green tea, and Mexican caldo de camarón, a spicy prawn stew — aren't exclusively peddled as hangover cures. However, New Orleans is home to Yaka Mein, a Chinese-Creole beef noodle soup that is so associated with reviving oneself after a night of heavy drinking that it's been given the affectionate nickname "Old Sober."

"It's basically a beef broth that's been seasoned with Creole spices," Shockey said. "But what makes it unique is that it's done with spaghetti and hard-boiled eggs. So, you definitely see the tradition of the Asian noodle soup that you might enjoy, like ramen, but it has this very American culinary conception."

She continued, "They think that it might have come to Louisiana by way of the Asian workers who were working on the railroads."

While researching this chapter of her book, Shockey found some commonalities between the soups served for breakfast across the globe. Typically, they fell into two categories: They were either spicy and energizing, so as to help "sweat out the toxins" (like the caldo de camarón or Bolivian fricasé, a pork stew that's amped up with aji amarillo peppers) or more nurturing and comforting, like ochazuke or Albanian tarator, a chilled cucumber soup studded with garlic.

Even within those two categories, the spread is varied. There's Mexican menudo, a peppery soup made with tripe and hominy, and Polish milk soup, which writer Olga Mecking described for "Roads & Kingdoms" as basically "warm milk, sometimes served with pearled barley, oats or with zacierki — tiny dumplings made by grating pasta dough directly into the soup." There's caldo de costilla, packed with ribs and potatoes, and Cambodian kuy teav.

Expand even further to include dishes like congee or jook, which straddle the line between porridge and stew, and the options for breakfast are seemingly limitless. For the past few weeks, writers — myself included — have heralded the start of soup season; if you aren't already in the habit, let this be the year you take it seriously enough to start your winter days with it, too.

Some of our favorite soup recipes: