Harris has already cast a record number of tie-breaking votes — can she turn the pointless job to her advantage? 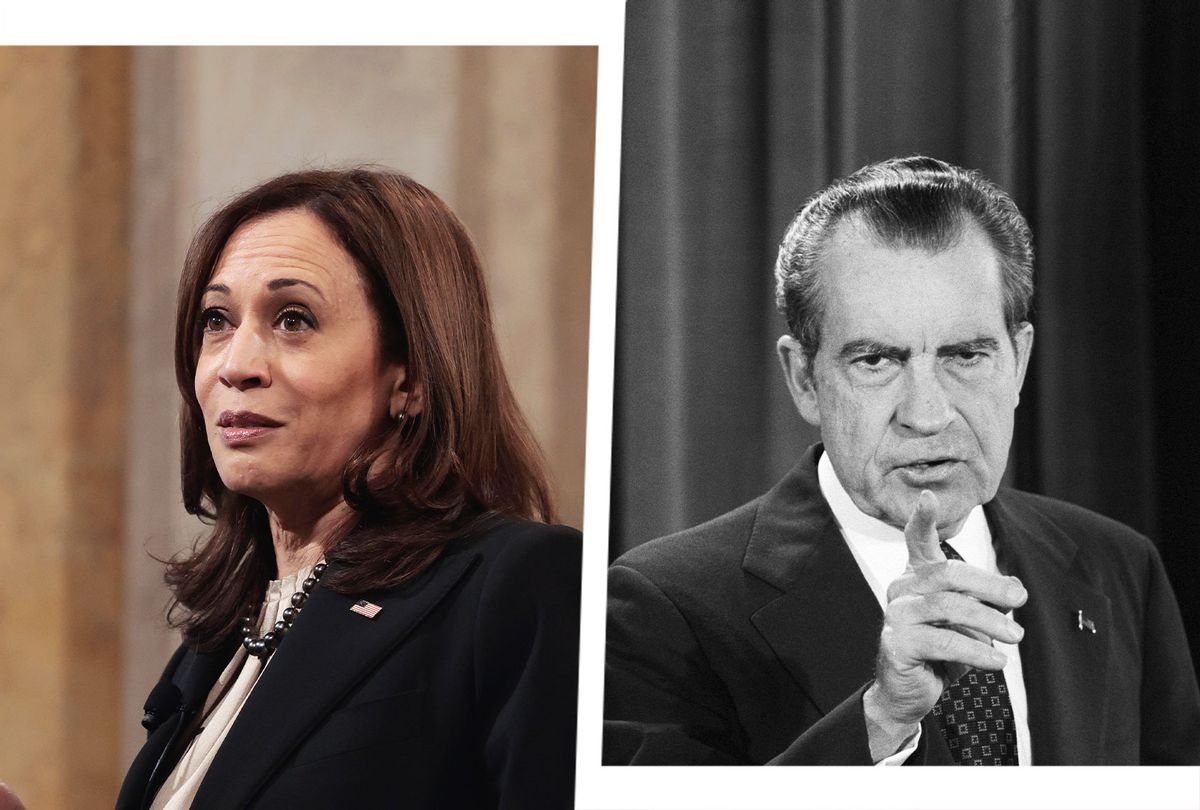 In a literal sense, Kamala Harris looks to become the most powerful vice president of all time — at least, if you go by the constitutional assignment given to that office by the founding fathers.

Let's be honest: The Constitution shortchanges the vice president, consigning him (or, right now, her) to "the most insignificant office that ever the invention of man contrived or his imagination conceived." Those were the words of John Adams, America's first vice president, who spent eight years in that powerless role under George Washington before his own memorable presidency. The vice president is mostly on hand in case the president dies or becomes incapacitated, and has almost nothing else to do. Nothing about the job's official (and extremely limited) constitutional responsibilities has changed since Adams held the post, even though several amendments have addressed presidential elections, lines of succession, transition periods and various other logistical matters. Under certain vice presidents (e.g., Dick Cheney), the office's scope has been broadened to a legally questionable degree, but the actual responsibility of the position is summed up in one sentence: "The Vice President of the United States shall be President of the Senate, but shall have no Vote, unless they be equally divided."

That rarely happens. It has only happened on exactly 283 occasions since Adams was sworn in. But in her first year in office, Vice President Harris has wielded the only weapon given to her by the founding fathers on more occasions — far more occasions — than any other vice president has done in his first year. (You probably noticed this fact, but her predecessors have all been men.)

The record for most tie-breaking votes overall is still held by the execrable John C. Calhoun with 31, but he didn't cast any of them until nearly a year into his vice presidency. (Calhoun is a strange case in various ways: He served seven years as veep under two presidents — John Quincy Adams and Andrew Jackson — and resigned the office before his second term was complete in favor of a Senate seat.)

Harris has cast 15 tie-breaking votes in less than 11 months, with the most recent coming on Dec. 8, more than twice as many as any previous first-year vice president. Second place, in fact, belongs to Mike Pence, who cast six tie-breaking votes in his first year; so the conclusion that this phenomenon is related to the stark political polarization of our era seems irresistible.

Harris claiming Pence's trophy resulted in a minor media moment and she was a good sport about it, joking, "Every time I vote, we win." Yet the actual votes are somewhat surprising: Twelve of Harris' 15 tie-breakers were on nominations, two involved budgetary matters and one was on President Biden's emergency COVID-19 stimulus bill. With that last exception, these were all mundane matters of governance, not major policy decisions.

This was the inevitable by-product of two random political events colliding with each other: The Senate is split down the middle between the two parties (yes, there are two independents, but both are functionally Democrats), something that has only happened three times before in American history. On this occasion, one of the two party leaders in the Senate has embraced a strategy of ruthless obstructionism: If Democrats proposed a bill declaring that the day after Monday is called Tuesday, it's not clear that Mitch McConnell would let his members vote for it.

In that context, it's inevitable that the vice president will cast tie-breaking votes on a regular basis. What conclusions can we draw, if any, about this particular vice president?

Perhaps not many — but Harris' unique status is no secret. No woman has ever previously held national elected office, nor has any person of Asian ancestry. Harris is also the first Black vice president, a fact which obviously leaves her somewhat in the shadow of Barack Obama. As a recent Daily Beast article points out, Harris is held to a double standard, and her sinking poll numbers and hostile press coverage seem to reflect that.

The symbolic significance of a Black woman with multiethnic heritage presiding over a 50-50 Senate still largely comprised of white men is impossible to miss. Harris has literally tilted the balance of power toward the Democrats with her tie-breaking votes, and vice-presidential history suggests she could also do so in a more profound way. That's where Richard Nixon comes in.

Yes, that Nixon. Long before he became infamous as the only president forced to resign in disgrace, Nixon was an unpopular, polarizing figure as vice president under Dwight Eisenhower. There are rough parallels to Harris' situation: Eisenhower was widely regarded as a genial old guy without much of an ideological orientation, perhaps with a few screws loose. (It later turned out that Ike deliberately played up this image so his adversaries would underestimate him, something Biden's foes should keep in mind.) In both cases, the president was seen as generally likable and the vice president as a controversial attack-dog type. Nixon even presided over an evenly-split Senate for part of 1954, although he never cast a tie-breaking vote.

But at least to this point in the Biden presidency, Harris has had virtually no opportunity to turn her role to political advantage, which was something Nixon excelled at. In Nixon's memoir "Six Crises" (written after his two terms as vice president), we learn how he maximized what he could do with his office. Nixon was already associated in the popular mind with the infamous anti-Communist Joe McCarthy, mostly through his work uncovering government official Alger Hiss' alleged role as a Soviet spy.

Eisenhower picked Nixon as his running mate in 1952 because he had broad support among the conservative base and was from California (then a crucial swing state). Nixon nearly lost his spot on the ticket due to a financial scandal, but cannily used a televised appeal to his supporters to pressure Eisenhower into keeping him, which established his reputation as a staunch right-winger who could battle the hostile "liberal media." (That was a narrative he and other Republicans would continue for decades to come.) Once elected, Nixon positioned himself as Eisenhower's second in command and heir apparent, although the two men never had a warm relationship and Ike would haver preferred someone else as his GOP successor.

Nixon demonstrated that he had a flair for the dramatic, which made him increasingly popular on the right. Sometimes these opportunities were thrust upon him, as when he managed Eisenhower's medical crises (including a serious heart attack) with appropriate dignity and firmness. Other events made the kinds of headlines that vice presidents don't normally provoke. In 1958, during a diplomatic trip through Latin America, Nixon was twice attacked by angry mobs, first in the Lima, Peru, and then in Caracas, Venezuela. On both occasions, he could plausibly have been seriously injured or even killed. While being pelted with stones in Lima, Nixon shouted back (with the help of a Spanish interpreter), "You are cowards, you are afraid of the truth! You are the worst kind of cowards."

Then, during the so-called Kitchen Debate in 1959, when Nixon was already seen as a likely presidential candidate the following year, he exchanged heated words about the Cold War with Soviet leader Nikita Khrushchev in front of news cameras — and at one point in front of a model kitchen (which Khrushchev admitted was impressive).

Whether or not these moments arose organically or were created and manipulated by Nixon, he embraced them to gain attention and heighten his reputation. He plunged gleefully into partisan politics, stumping for Eisenhower and other Republicans and saying all of the things about Ike's foes that the beloved war hero would never have said himself. He whipped up the Republican base, even at risk of being associated with midterm election defeats. He put countless Republican politicians in his direct personal debt, adding to the stockpile of political capital he had accumulated through his use of the vice presidency's symbolic power. By the time Nixon ran for president in 1960, everyone knew who he was and viewed him as the unapologetic ideological force behind the Eisenhower administration.

How did that turn out for Nixon? Pretty well, although it took a while. He won the 1960 Republican nomination fairly easily, but then lost to John F. Kennedy in one of the closest elections in American history. Two years after that he ran for governor of California and lost that race too, and his political career appeared to be over. Six years later, of course, he completed one of the biggest political comebacks in history with his successful presidential campaign in the tumultuous year of 1968.

During his eight years as vice president, Nixon was seen as a hatchet man with real-world toughness who went to town on the Republican Party's opponents — even though he had no real power. (Except for the tie-breaking vote: He cast just eight of them.) Kamala Harris is well on her way to becoming the most influential vice president of all time — at least in narrow constitutional terms. Whether or not she can use her inconsequential office the way Nixon did — to build a forceful reputation, accumulate political power and position herself as president-in-waiting behind an elderly incumbent — remains to be seen.

More from Matthew Rozsa on the puzzles and contradictions of American political history: