Can Democrats break the midterm curse? Maybe — consider the example of 1934

Midway through FDR's first term, Democrats made major gains in the House and Senate. Are there lessons for 2022? 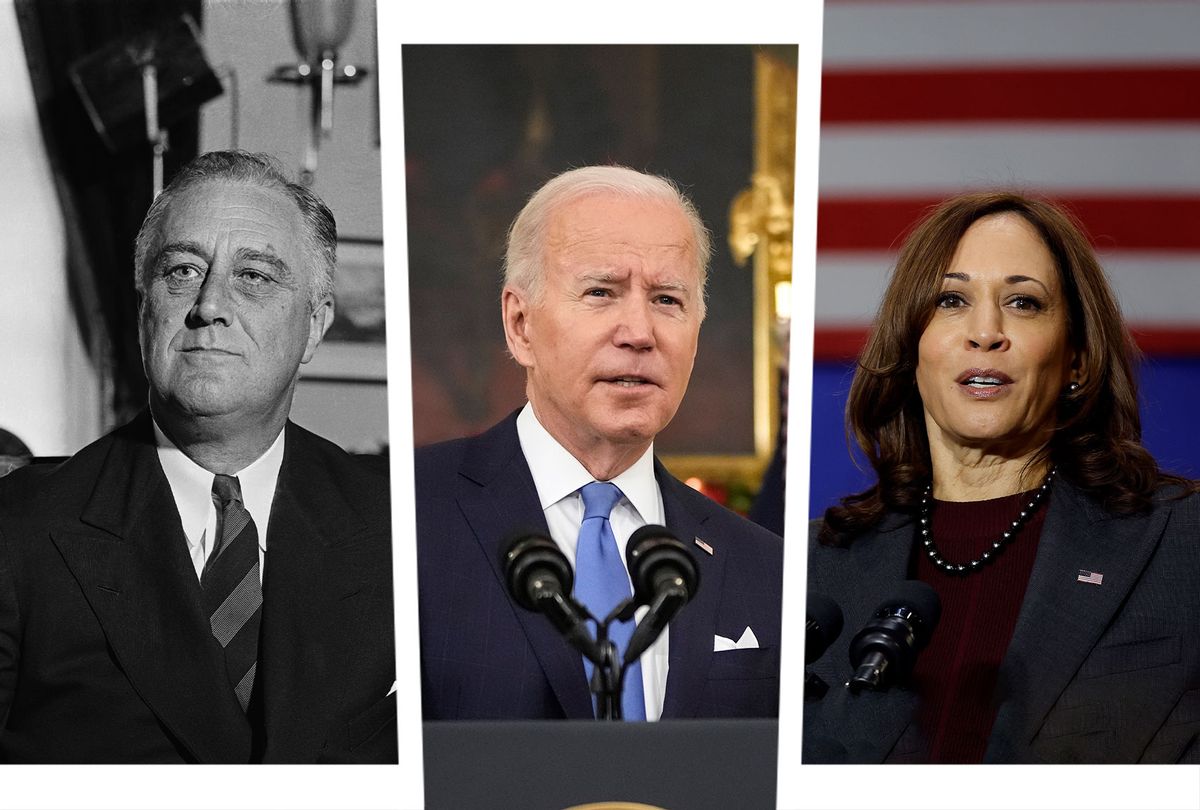 Now that Joe Manchin has sounded the death knell — at least for the moment — for Joe Biden's Build Back Better package, Democrats are doomed in the 2022 midterm elections.

Or, wait: Are they? Sometimes the "laws" of politics (or economics) are characterized as immutable, akin to the laws of physics. They're not, of course. Not a single ballot has been cast in the midterms. If Democrats can find a way to turn out their voters at unexpectedly high levels, while Republicans don't, they could turn 2022 into another blue wave. Political trends do not govern us; they are the results of human behavior, which is never entirely predictable.

Of course the apparent collapse of Build Back Better doesn't help. But the pattern that every political analyst and historian understands may be the real problem: Since the modern era of American politics began with Franklin D. Roosevelt's election in 1932, the party that controls the White House has lost congressional seats in 19 of the 22 midterm elections. Two of the three exceptions, in 1998 and 2002, were special cases with little relevance to the Democrats' predicament in 2022. In 1998, Democrats benefited from a booming economy and popular backlash against the Republican effort to impeach Bill Clinton over a sex scandal. The 2002 midterm elections came just a year after the 9/11 terrorist attacks; patriotic sentiment was running high and George W. Bush had successfully defined himself (for the moment) as a "war president."

It's that third exception, way back in 1934 — during the first of Roosevelt's three-plus terms as president — that may offer an instructive example. Those midterms came after FDR and the Democrats had passed a series of ambitious and historic laws, known collectively as the New Deal. While the Great Depression certainly didn't end immediately, the New Deal put millions of people to work and did a great deal to relieve suffering and despair. Despite Roosevelt's reputation (then and now) as a progressive president, the underlying premise of the New Deal was more pragmatic than ideological: Economic insecurity, poverty and hunger were a threat to social stability and indeed to the capitalist system; creating a social safety net was understood as a matter of urgent importance. A few years later, Roosevelt put it this way in his 1944 State of the Union address: "We have come to a clear realization of the fact that true individual freedom cannot exist without economic security and independence. 'Necessitous men are not free men.' People who are hungry and out of a job are the stuff of which dictatorships are made."

Within his first 100 days, Roosevelt had done a great deal to restore confidence in government, providing emergency financial aid to those who were struggling, passing the National Industrial Recovery Act and the Securities Act, and implementing a number of other regulatory and relief measures. Indeed, his first term was among the most productive in presidential history, and resulted in a fundamental restructuring of the federal government, which from that point onward was a more direct presence in ordinary people's lives than ever before. Conservatives characterized this as a dangerous intrusion on personal freedom (and have done so ever since); what we now call "liberalism" coalesced around the idea that government action was sometimes necessary to help the most vulnerable people in society.

Despite these legislative successes, however, political success was not guaranteed to follow. Persistent unemployment was still painfully high, and corporate America had begun to impose wage cuts. In the era before sophisticated polling, pundits could not scientifically assess a president's popularity like they can today. For all the Democrats knew, Republican warnings about creeping socialism had led to widespread panic, and conservatives might turn out in record numbers to halt a supposed red menace. On the other end of the spectrum, some Democratic radicals and socialists were frustrated with the Roosevelt administration's piecemeal approach to issues of social and economic justice. Sen. Huey Long, the legendary Louisiana populist who advocated a massive program of wealth redistribution and federal spending, was planning to run against Roosevelt for the Democratic nomination in 1936 (and probably would have, if he hadn't been assassinated in 1935).

In the event, Democrats did remarkably well in the 1934 midterms, gaining nine more seats in the House — and also an extraordinary nine seats in the Senate, giving them a supermajority in that chamber, with 69 of the 96 seats. Richard Walker, director of the Living New Deal Project and professor emeritus of geography at the University of California, Berkeley, told Salon by email that the Democrats' big win resulted from two principal factors. Most obviously, FDR and his party were seen as taking decisive steps to address the economic crisis.

"The Depression was still bad and the Republicans had no new ideas since 1932," Walker wrote, "so even though FDR had not solved anything definitively yet, no one was about to bring back the utterly failed Hooverites. Does that count as missteps of the GOP? Well, they had lots of time to do badly from late 1929 to early 1933 and people hadn't forgotten yet."

Joe Biden is no doubt aware of that history, and very likely intended Build Back Better as his own legacy-setting achievement, substantial enough to shift the political tides. Whether that package can yet be resuscitated remains unclear, but his fundamental problem remains that the Democrats have razor-thin majorities in Congress and remain unwilling to end the Senate filibuster. Without a major legislative win, the Democrats' last remaining hope is to run a negative campaign and convince voters that a Republican victory would be catastrophic. Pending decisions at the Supreme Court, including the possible or likely overturn of Roe v. Wade, could potentially produce a political backlash that helps the Democrats hold control of Congress.

There are again vague similarities to the 1934 midterm elections, when Democrats successfully depicted Republicans as extremists, although in a different sense than today: They were associated with the wealthy elite, with businessmen who lived in mansions and held to laissez-faire dogmas radically out of touch with the lives of ordinary people. Returning to the disastrous economic policies of Herbert Hoover's administration, Democrats argued, would be a dreadful mistake. In 2022, the threat posed by a recently defeated Republican administration has taken a more literal and even more dangerous form, with Donald Trump and his supporters using fascist language and tactics and overtly seeking to overthrow democratic institutions.

Calling out that extremism wasn't enough for Democrats in the recent Virginia gubernatorial election, but that doesn't prove it wouldn't work on a national scale, if pursued more aggressively and effectively. If there's an applicable lesson for Democrats to be found in the 1934 midterms, it might be this: The incumbent party can win, but only if it makes an overwhelmingly persuasive and urgent case that their opponents are dangerous and the future will be truly bleak if they prevail. Given the circumstances, that's a highly plausible argument.

Read more from Matthew Rozsa on the twists and turns of American political history: