Untwist your knickers, Trump fans: History says the 2020 election was nothing special

Except for the loser's massively wounded ego, in historical terms 2020 wasn't especially close or controversial 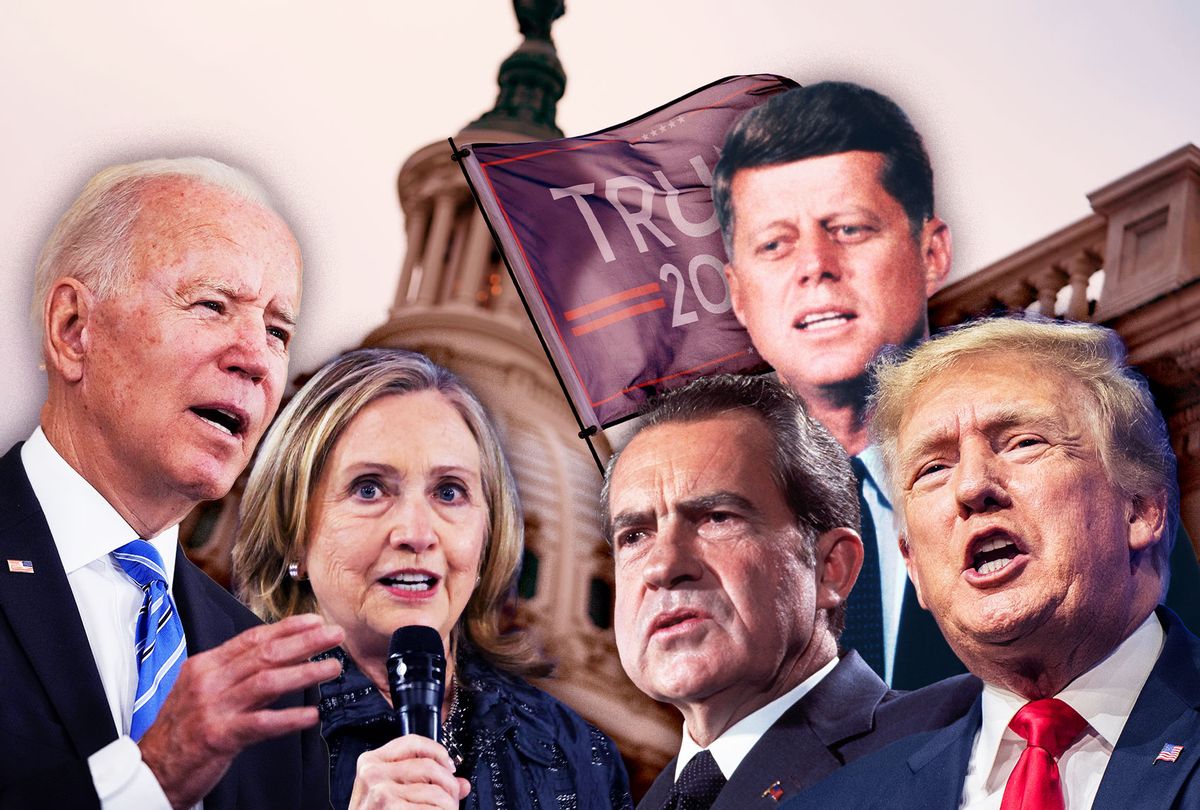 In his cascade of lies about the 2020 election, Donald Trump preys on the desire of his snowflake supporters to believe that they're special. The thing is, they're not.

I live in Northampton County, Pennsylvania, a swing region in a swing state. Like the rest of the commonwealth, it backed Barack Obama twice before supporting Trump in 2016 — one of 206 counties out of America's 3,141 to make the Obama-Trump pivot — and then switched back to Joe Biden in 2020.

You might think that a county that supported Biden would never even consider electing someone who openly calls for overturning the will of its own voters. Talk to Trump supporters around here, however, and you'll hear a disturbingly blasé attitude toward that idea. Our Republican candidate for county executive, Steve Lynch, actually attended the Jan. 6 rally that preceded the Capitol assault. At one point Lynch can be seen on camera, around 1 p.m., crowing, "It's going down" as the attack began. When approached by Salon about his controversial campaign, Lynch insisted that the protest he attended had been peaceful, that Nancy Pelosi was (somehow) to blame for the violence and that antifa had caused or provoked the unrest. He complained about "the pathetic narrative put out there by this corrupt media," but offered no evidence to back up his assertions. I twice asked him a question he refused to answer:

American history is full of examples of political injustice, yet there was only one other presidential election before 2020 in which a large part of the country refused to accept the official outcome. How do people who claim this election was stolen justify the way Donald Trump and his movement have responded to their loss?

I think that oddly specific question — even if Trump supporters' claims about the 2020 election were true (which they're not), would they justify violence? — is important. Here's why: Whatever Trump fans may believe, the 2020 contest wasn't especially close or controversial in historical terms. Indeed, there have been many other elections when the loser had far more plausible grounds to claim fraud or contest the result.

We can start with Trump's supposed hero, Andrew Jackson, who won the popular vote by a substantial margin in the 1824 election but was not elected because no candidate had won enough electoral votes. Under the terms of the 12th Amendment, the election was decided in the House of Representatives, where Speaker Henry Clay threw his influence behind Secretary of State John Quincy Adams. As president, Adams in turn appointed Clay as his secretary of state, and Jackson, not without plausibility, accused the two of making a "corrupt bargain." This was never proved, and since Clay had followed the Constitution, Jackson had no legal claim that he'd been cheated. There's no doubt that the Adams-Clay deal was ethically questionable, and Jackson used his sense of outrage to help form a new political organization — the Democratic Party.

Jackson was an unappealing historical figure on many levels, but here's something he didn't do: He didn't incite an insurrection against the government over losing that heated election.

The same is true for almost every other controversial presidential election. Both Democrats and Republicans actively suppressed votes and tampered with results during the 1876 election. Arguably, Rutherford B. Hayes and the Republicans were just a little better at it than Samuel Tilden and the Democrats. A second civil war nearly broke out after that contest, averted because both parties agreed to a racist compromise that allowed Hayes to take the White House while Southern Democrats brought an end to Reconstruction and reduced Black people to second-class citizenship.

After Grover Cleveland lost the 1888 election — despite winning the popular vote, like Jackson and Tilden before him  — many of his Democratic supporters accused Republicans of fraud, although Cleveland himself dismissed those claims as not legally supportable.

Much closer to our own time, Richard Nixon actually had a plausible case that John F. Kennedy and the Democrtats rigged the 1960 election through chicanery in Illinois and Texas, but concluded he could not get the election overturned in court. He later wrote, presciently, that "the mark of the good loser is that he takes his anger out on himself and not on his victorious opponents or on his teammates."

After the 2000 election, Al Gore urged his supporters to peacefully accept the results even though he had won the popular vote and only lost in the Electoral College because he trailed George W. Bush by 537 votes in Florida — and only then because a recount was halted before that margin could disappear. Unlike Cleveland or Nixon, Gore took his case all the way to the Supreme Court, but after it ruled against him in an infamous and overtly partisan decision, Gore accepted the results and urged his supporters to do likewise.

Even the legendary election of 1800, which threatened to tear the young country apart and revealed the flaws in the Constitution's original method for electing a president, did not lead to violence at the time. It's fair to say, however, that one loser (Aaron Burr) has been depicted as a historical villain ever since.

The 1968 election was very close and highly divisive — and may have witnessed one of the sleaziest political dirty tricks in American history. According to reliable accounts, Nixon tried to undermine the ongoing negotiations to end the Vietnam War in order to torpedo the campaign of Vice President Hubert Humphrey, his Democratic opponent. President Lyndon Johnson supposedly knew this was happening but did not go public with it. One of Nixon's advisers at the time was a young man named Roger Stone, more recently a confidant and consultant to Donald Trump. (Nixon was later forced to resign over the Watergate scandal, after trying to spy on Democratic campaign headquarters and then covering it up.)

Not surprisingly, Trump and the Republicans don't bring up 1968 or any of those other elections. For that matter, they also don't mention the one election that did result in violent public rejection — the 1860 election won by Abraham Lincoln. No one seriously suggested that Lincoln had stolen the election, but the leaders of Southern slave states found him unacceptable as president, and plunged the nation into four years of bloody carnage for what can reasonably be described as the worst possible reasons.

There are more reasons why Trumpist claims that the 2020 election was special don't hold up to historical scrutiny. For most of American history, Black people and women could not vote. The above-mentioned 1876 election, in fact, was resolved precisely by stripping away Black men's right to vote in most of the South. Throughout American history, people have been disenfranchised based on race, ethnicity, class, gender or simply the perception that they were likely to vote the "wrong" way. There have been elections decided through backroom deals, voter suppression, tampering with the results and other dubious or illegal tactics. Our democracy is almost always messy, and on many occasions deeply flawed.

If Trump were correct in his assertions about the 2020 election (which, once again, he absolutely is not), that would of course be an injustice. But it probably wouldn't make the list of the top 10 injustices in American political history. To state the obvious, Trump fans don't care about political injustice and absolutely don't care about history. Those are just excuses for a blatant attempt to overthrow democracy. If Trump's supporters want to believe they are special, in one sense they are. They remain loyal to the only president in American history to openly flout George Washington's most important precedent — the peaceful transfer of power.