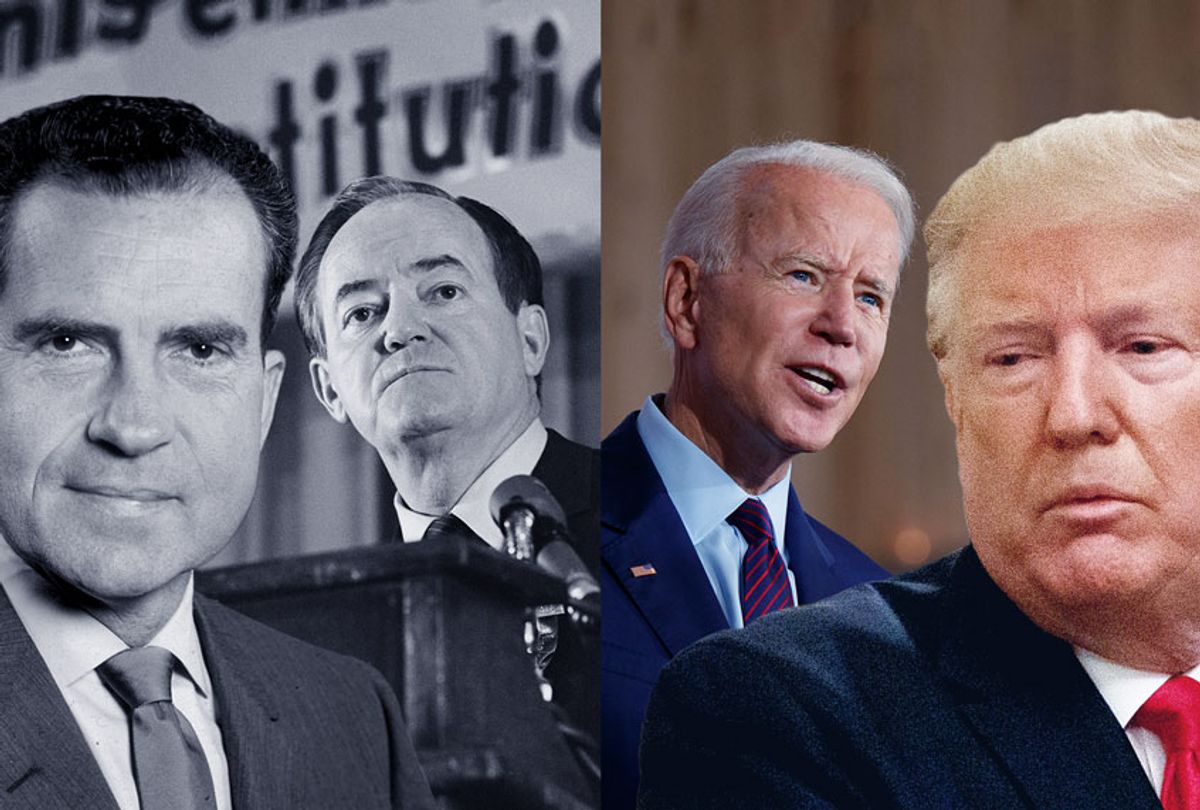 Donald Trump is not the first Republican to abuse American foreign policy to improve his chances of winning a presidential election. At least some of the people around Trump are well aware of this. They are continuing a tradition of ruthless partisanship, always unethical and potentially illegal, that is traceable back more than half a century, when Richard Nixon scuttled a peace process that could have ended the Vietnam War.

Nixon, then a former vice president, had the same goal as Trump: To undermine a leading opponent, in that instance Vice President Hubert Humphrey, who was the Democratic nominee in the chaotic election of 1968. In a nation already traumatized by the assassinations of Robert F. Kennedy and the Rev. Martin Luther King Jr., Humphrey was a compromise candidate tarnished by his association with Lyndon Johnson’s deeply unpopular war in Southeast Asia. Nixon correctly perceived that as a weakness and exploited it.

Trump appears to have pursued similar dirty tricks against former Vice President Joe Biden, whom polls have suggested would defeat Trump easily as a potential Democratic nominee next year. In fairness, why wouldn’t Trump pursue such tactics? They worked against Hillary Clinton in 2016, who was perceived by many voters as untrustworthy and plagued by scandal, based largely on false rumors, leaked documents and innuendo. At least until now, Trump has suffered no serious consequences for his 2016 campaign, just as Nixon didn't in 1968.

If we don't want another 50 years of Republicans dabbling in borderline treason in search of political advantage, then the consequences must be serious. If Trump is impeached by the House of Representatives, at least 20 Republican senators will have to vote to convict him during the ensuing Senate trial (along with all 45 Senate Democrats and both independents). That’s an exceptionally unlikely outcome, but the only way it happens is if an overwhelming majority of Americans are convinced Trump, like Nixon before him, is guilty of treasonous conduct. That should be the focus of all the pro-impeachment messaging that occurs, from congressional Democrats to any media outlet that claims to cover this story responsibly.

To be clear: Trump's arm-twisting and attempted extortion in Ukraine wasn't unprecedented. Other aspects of his presidency are unprecedented in their corruption: the high rate of staff turnover, the ways he has exploited his power and influence to help his private business empire, his pandering to despots and dictators like Russia’s Vladimir Putin, North Korea’s Kim Jong-un, the Philippines’ Rodrigo Duterte and Saudi Arabia’s Crown Prince Mohammed bin Salman.

Yet Trump’s request for a “favor” from Ukrainian President Volodomyr Zelensky — that favor being an investigation of Biden, whom polls generally show has the best chance of beating Trump in the 2020 election — was highly Nixonian. There’s no direct proof that Trump withheld that $391 million in military aid from Ukraine to coerce Zelensky into doing his bidding, but the evidence is highly suggestive. At any rate, what has already been proved is damning enough.

If we flash back 51 years, the evidence is even more damning: Richard Nixon was arguably willing to sacrifice thousands of lives to get elected president.

Shortly before the Humphrey-Nixon election of 1968, a Republican operative named Anna Chennault — a private citizen, playing a similar role to Rudy Giuliani’s in the Ukraine scandal — served as an intermediary between the Nixon campaign and the U.S.-supported government of South Vietnam. Her mission, which she successfully accomplished, was to convince the South Vietnamese not to participate in any peace talks orchestrated by President Johnson during the campaign, on the grounds that Nixon could get them a better deal.

The motive was clear: If Johnson could resolve the Vietnam War before Election Day, Humphrey’s image could be transformed from warmonger to peacemaker, and his chances of winning the election would dramatically improve. Thanks to Nixon’s unauthorized backstage diplomacy, the cause of peace was sacrificed to his political ambitions. The war continued for another five years, and hundreds of thousands died.

Now look at Trump’s actions during the 2016 and 2020 election cycles. In 2016 he openly asked Russia to find emails that had been deleted by Hillary Clinton and for a time his campaign was run by Paul Manafort, who had previously worked for pro-Russian politicians in Ukraine and used his influence in the Trump campaign to push for policies that advanced Russia's imperialist ambitions in that country. Special counsel Robert Mueller's report makes clear that the Trump campaign was aware of Russian meddling in the election, encouraged it and hoped to benefit from it. Circumstantial evidence overwhelmingly suggests that the Trump campaign was eager to receive “dirt” on Clinton from Russian sources. Mueller’s report itself proves that Trump obstructed justice as the intelligence community began investigating his alleged crimes, and was only spared indictment because of Justice Department policy that a sitting president cannot be charged with a crime.

Now it has been revealed that Trump, learning nothing from the Russia collusion scandal — or emboldened by getting away with it — once again tried to collude with a foreign power in order to win an election. The president asked a foreign leader to investigate Biden, based on the unsubstantiated conspiracy theory that Biden had pressured Ukraine to fire the country’s top prosecutor in order to stifle investigations into a company that employed his son, Hunter Biden. Seeking a foreign government’s aid in a political smear campaign is, by definition, treasonous. By withholding military aid, Trump was willing to risk Ukrainian lives in order to achieve his corrupt goal.

Last January I spoke with Michael McFaul, who served as  ambassador to Russia under Barack Obama. Vladimir Putin’s ambition, McFaul told me, is to bring about “the end of the liberal international order. If he succeeds, that's what he's aiming to do. The breakup of states as you have in the U.K., the breakup of alliances and NATO, the breakup of the European Union, those are all things that Putin thinks are in his national interest.”

Empowering Russia to destabilize American foreign policy (as Trump did in 2016), and weakening Ukraine’s attempts to keep Russian aggression at bay (as he did in 2016 and, apparently, in 2019) amount to assisting Putin in achieving his goal of bringing about what McFaul describes as “the Illiberal International.”

These are not easy or comfortable things to write. I have a record of interviewing numerous conservatives with whom I disagree on many issues, from Fox News personality Tucker Carlson to former former New Jersey Gov. Chris Christie to right-wing star commentator Ben Shapiro. I believe it is important to build bridges across the political divide, and have corresponded with the Trump White House in that spirit on several occasions. But while it is important to set aside partisanship and engage honestly with political opponents, it is impossible to regard any president as legitimate when he abuses American foreign policy to cheat in elections. That’s true of Trump now, just as it was of Nixon in 1968.

Earlier this week I reached out to the White House press office to discuss a 2017 interview I had with Roger Stone, Trump’s former political adviser (and also an adviser to Nixon way back when). Stone told me at the time that he thought that Lyndon Johnson in 1968 "was maneuvering not to end the war but to elect Hubert Humphrey. I think Nixon was maneuvering to hold on to the election."

I asked Stone whether he saw parallels between Nixon in 1968 and Trump in 2016. Unsurprisingly, he dodged. "There is some evidence in the case of Nixon,” Stone said. “I would argue that it's inconclusive based on the broader facts of what Johnson actually had and what he was trying to achieve. And there is no evidence in the case of Trump."

I asked the White House a similar question: Did it wish to comment on any possible parallels between Nixon's actions in Vietnam in the 1968 election cycle and the Trump's interactions with Russia in the 2016 cycle and Ukraine in the 2020 cycle? Is it justified, I asked, to use foreign policy to win elections if you believe that your opponents are doing likewise?

Through deputy press secretary Hogan Gidley, the White House declined to respond. I can’t say I was surprised.