Trump yearns to emulate the historical oddity of Cleveland's two terms — but seriously, there's no comparison 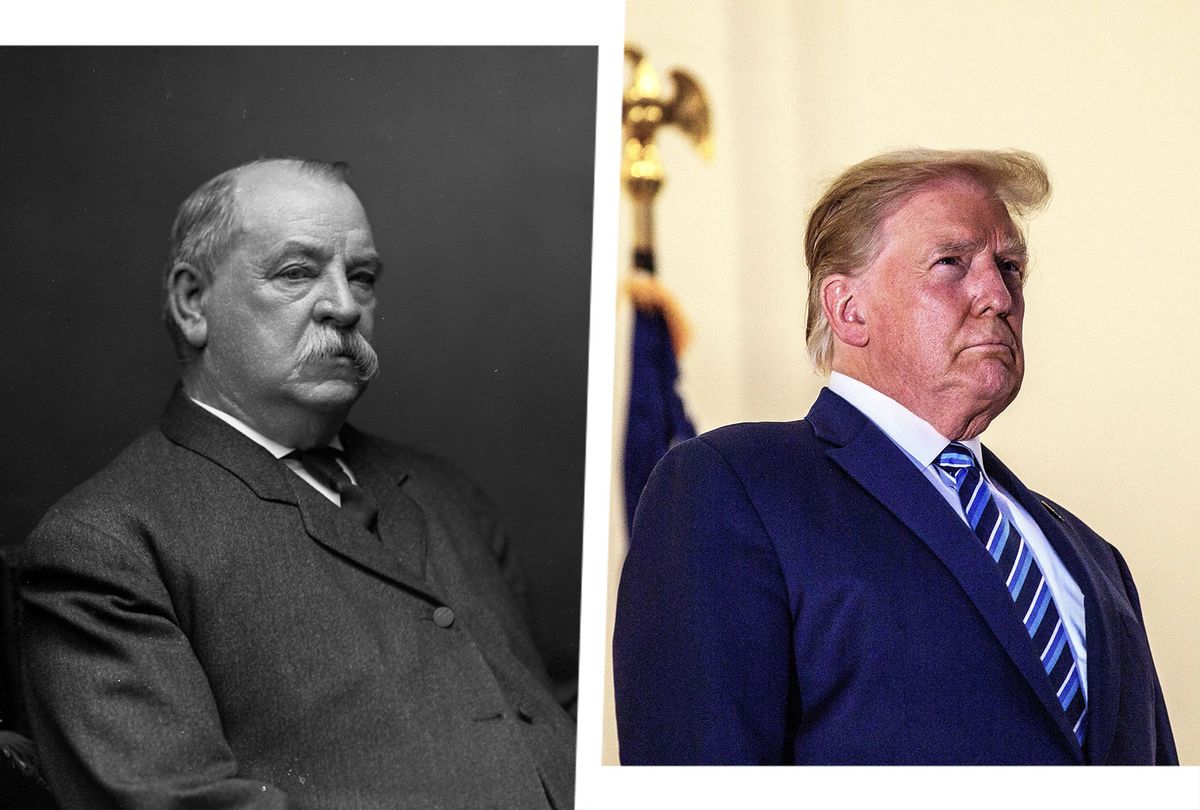 If Trump actually runs for president in 2024, he'll be aiming to join Cleveland in the history books as just the second president to serve non-consecutive terms . Other former presidents have tried to pull that off: Martin Van Buren ran twice more after leaving office, in 1844 and 1848, Millard Fillmore ran again in 1856, Ulysses S. Grant ran for a third term (four years after the end of his second) in 1880 and Theodore Roosevelt, after switching parties, gave it another whirl in 1912. Cleveland alone succeeded. He was first elected in 1884, lost a narrow and disputed election to Benjamin Harrison in 1888 and then staged a comeback, defeating Harrison in their 1892 rematch.

Trump obviously is thinking about trying to emulate that example, telling an audience last month at the Conservative Political Action Conference that he had actually won the 2020 election (which is of course false) and adding, "I may even decide to beat them for a third time." Sixty-eight percent of CPAC attendees said they want Trump to run for president again and, according to a Politico-Morning Consult poll last month, 54% of Republicans said they would back Trump in the 2024 primaries. Barring some unforeseen event that makes this prohibitively difficult or impossible — such as a felony conviction — Trump looks like the clear GOP frontrunner in 2024.

So it's instructive to compare Trump to the man he would join in the history books if he became president again in 2025. I wrote about Cleveland in my history master's thesis at Rutgers University-Newark and his presidency will again be the subject of my dissertation. Despite his notoriously phlegmatic personality, I almost feel like I know Cleveland personally. There is one word that explains why Trump is unworthy of the comparison: integrity.

To be clear, I certainly do not share Cleveland's political philosophy. He opposed women's right to vote, supported racist Jim Crow laws in the post-Civil War South and used the Army to break up a nationwide railroad strike in 1894. He strongly opposed the rise of an American welfare state and mainly viewed his presidential powers in a negative sense, in terms of vetoing legislation and restricting congressional power, rather than an affirmative or constructive one.

In the literal definition of the word, Grover Cleveland was a conservative. Yet at least he was an authentic conservative, not a strictly self-serving opportunist like Trump. That's where he rises above Trump as both a human being and a president — not as a good president, necessarily, but by far a less evil one.

Take Cleveland's loss in the 1888 election. He was the fourth of the 11 sitting presidents (including Trump) who have sought another term and been defeated. Unlike Trump — the only president to try to stay in power by overriding the will of the people — Cleveland actually won the popular vote. There were even rumors at the time that he would have won the electoral vote as well, if not for fraud. Cleveland, however, had a lawyer's mind and immediately saw that there was no concrete evidence of chicanery. He won about 90,000 more votes than Harrison did — in the much smaller electorate of that era, a margin of about 0.8% — but accepted that he had lost the election fair and square according to the rules of the U.S. Constitution.

It's difficult to stress that point enough. Less than a quarter century had passed since the end of the Civil War, and less than a dozen years since the contentious election of 1876, which also nearly caused a civil war. If Cleveland had wanted to stir up his supporters with false claims that he'd been robbed, it is conceivable that he could have succeeded. Instead he accepted his fate as the third presidential candidate (at the time) to lose an election despite winning the popular vote. You probably know that happened to Al Gore in 2000 and Hillary Clinton in 2016; before Cleveland had come Andrew Jackson in 1824 and Samuel Tilden in 1876.

On that front, the contrast could hardly be stark. In both the 2016 and 2020 elections, Trump conditioned his supporters to believe that there were only two possibilities: He would win or the other candidate was cheating. He accused Ted Cruz of cheating when the Texas senator won the Iowa caucuses in 2016 Republican primaries and falsely claimed that Hillary Clinton had won the popular vote in 2016 thanks to millions of illegal votes. He tried to discredit mail-in ballots prior to the 2020 election because polls showed that Democrats scared of the COVID-19 pandemic were more likely than Republican to vote by mail. (Ironically, Trump used this to try to cheat himself by slowing down the Postal Service.) After he lost to Joe Biden, Trump came up with any number of bogus claims to convince his supporters (and perhaps himself) that he actually won.

There's no point in listing all of Trump's false claims — which ranged from saying illegal immigrants voted and asserting poll watchers weren't allowed to do their jobs to actually suggesting voting machine software was rigged — for two reasons: First, Trump and his supporters are "gish-galloping," attempting to overwhelm opponents with bad arguments; and second because his arguments are self-evidently irrelevant and absurd. They are irrelevant because Trump lost every single case he brought to court which alleged voter fraud. More than 90 federal and state judges, many of them Republicans and Trump appointees, rejected his various legal challenges. Are we supposed to believe that all these judges — Republicans along with the Democrats — engaged in a giant conspiracy with Trump's own attorney general William Barr (who investigated and rejected Trump's claims) and former Vice President Mike Pence?

No objective or rational person would take Trump's hypothetical conspiracy seriously, but the main point I'm making here  is that Cleveland, a genuine conservative, would never have done anything like that.

This is not the only way in which Cleveland displayed integrity in ways that Trump has not, and likely never will. Whatever his philosophical failings, Cleveland was impeccably honest in his financial dealings, going out of his way to avoid even the appearance of ethical issues during his political career. Trump, by contrast, allowed more than 3,000 conflicts of interest to emerge during his administration, and obviously tried to enrich himself through his office.

Trump has also been a notorious flip-flopper on policy positions, drastically shifting his views on everything from Obamacare and entitlement programs to immigration, LGBTQ rights and gun control. Cleveland, by contrast, was willing to risk his political career by taking bold stances on important issues even if many of his fellow Democrats disagreed with him. When running for re-election in 1888, he focused the entire campaign on lowering tariffs, although many Democrats supported protectionism. Four years later, he told Democrats that he supported a gold standard for America's currency instead of a bimetallic one, thumbing his nose at the party's agrarian wing which wanted the "free coinage" of silver. As president, he tried to stop America from annexing the Kingdom of Hawaii because he opposed imperialism, even though seizing the islands was a popular move and Cleveland needed a political boost.

It doesn't much matter whether Cleveland was right or wrong on the issues of tariff reform and silver coinage. (I think his anti-imperialism stance on the Hawaii issue was his finest hour.) What matters was that Cleveland cared more about some issues than about his own ambitions. He definitely wanted to be president, and like most politicians was open to some degree of compromise. At the same time, there were certain principles he would not forfeit in the name of winning. Unlike Trump, there were lines that Cleveland would not cross.

I could add many other points to the contrast between Cleveland and Trump. Cleveland rose from poverty through hard work; Trump was born into wealth, depended on his father and government programs for his business career and is notoriously lazy. Cleveland was patriotic to a fault; Trump cozies up with dictators hostile to America, from Russia's Vladimir Putin to North Korea's Kim Jong-un.

The main takeaway here, though, is that Cleveland believed in the Constitution and conservative ideas. When he was elected to his second term in 1892, it was because he had convinced enough Americans that he was correct on the issues. He didn't whine about losing in 1888, lie about where he stood or debase himself through his misconduct. He was often wrong on the merits, especially by contemporary standards. But at least he was an honorable man who, for all his faults, deserves a much better historical fate than to be lumped in with Donald Trump.